The European Air Navigation Planning Group (EANPG) Programme Coordinating Group (COG) established the Volcanic Ash Exercises Steering Group for the (far) Eastern part of the EUR Region in 2010 in order to increase awareness and initiate volcanic ash exercises with impact scenarios on trans-east, trans-polar and cross-polar routes. Since then, five volcanic ash exercises have been conducted by this steering group from 2013 to 2017. Further below is a description of the most recent exercise called VOLKAM17 which was conducted from 20 to 21 April 2017.

VOLKAM17 simulated an eruption of the volcano Koshelev in Kamchatka, Russian Federation, that produced an ash cloud impacting the Northern Pacific (NOPAC) and trans-east routes as well as the Pacific Organized Track System (PACOTS). This exercise allowed civil aviation authorities, air navigation service providers and airspace users to practice their response to a volcanic eruption.

The associated VOLKAM17 Debrief Meeting that took place in Paris on 11 May 2017 resulted in several recommendations for real and/or simulated volcanic ash events. 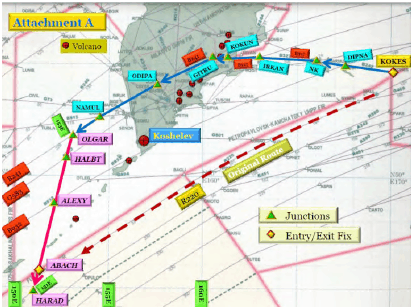 For the latter, simulating a more complicated scenario, such as two eruptions at the same time that would impact various route structures in the far eastern Russian Federation and Northern Pacific, was recommended.

With new participation from Canada, contingency routes will be coordinated between Edmonton, Anchorage and Magadan in order to alleviate congestion in the Anchorage Oceanic Airspace. In addition, Magadan, Petropavlovsk-Kamchatsky and Fukuoka Area Control Centres will work on finalizing a contingency agreement that will provide operators contingency route options in realtime events. This information will be promulgated by Notice to Airmen (NOTAM) when a volcanic ash event occurs.

A generic VOLKAM email address for real-time events will also be considered for sharing information on re-routes in order to increase situational awareness amongst stakeholders. A campaign to increase airline participation will allow testing of air traffic flow management procedures due to capacity constraints in Kamchatka Area 1 and Kamchatka Area 2 in the Magadan Flight Information Region. The Debrief Meeting also recommended practicing aircraft diversions since this occurs in real volcanic ash events. The use of Dynamic Airborne Reroute Procedures (DARP) for contingency events will be explored by the air navigation service providers and operators in order to have a harmonized approach in managing revised flight plans accessible by all relevant Area Control Centres.

These recommendations were considered in the VOLKAM18 Exercise Directive. Details of VOLKAM18 were developed during the VOLKAM18 Planning Meeting that took place from 7 to 9 August 2017 in Petropavlovsk-Kamchatsky, Kamchatka, Russian Federation.