The ICAO MID Office hosted the Seventeenth Meeting of the Middle East Air Navigation Planning and Implementation Regional Group (MIDANPIRG 17) and the Seventh Meeting of the Regional Aviation Safety Group-Middle East (RASG-MID 7) which were organized concurrently, from 15 to 18 April 2019, for the first time in Cairo, Egypt. The meeting directed supported directives from the ICAO Council regarding PIRGs and RASGs arrangements.

Planning and Implementation Regional Groups (PIRGs):The regional planning process is the principal engine of ICAO’s planning and implementation work. It is here that the top-down approach, comprising global guidance and regional harmonization measures, converges with the bottom-up approach constituted by States and aircraft operators and their proposals for implementation options. The development of regional plans for air navigation systems including CNS/ATM systems is undertaken by ICAO’s PIRGs with the assistance of ICAO’s Regional Offices, located in Bangkok, Cairo, Dakar, Lima, Mexico, Nairobi and Paris, and in coordination with ICAO Headquarters staff.

RASGs serve as a regional cooperative forum that integrates global, regional, sub-regional, national and industry efforts in continuing to enhance aviation safety worldwide. RASGs develop and implement work programmes that support a regional performance framework for the management of safety on the basis of the Global Aviation Safety Plan (GASP). RASGs build on the work already done by States, existing sub-regional organizations such as the Cooperative Development of Operational Safety and Continuing Airworthiness Programmes (COSCAPs) and Regional Safety Oversight Organizations (RSOOs) and support the establishment and operation of a performance-based safety system for the region.

Throughout the meeting, participants were introduced to 52 working papers, seven information papers and 16 presentations that highlighted important topics and presented the outcomes of the different MIDANPIRG and RASG-MID subsidiary bodies.

Addressing participants, Mr. Mohamed Khalifa Rahma, ICAO’s Middle East Office Regional Director, expressed his sincere gratitude to all MID States for their support to the MIDANPIRG and RASG-MID activities and for hosting the majority of the previous meetings.

“The Middle East has been the fastest growing Region for passenger and cargo traffic since 2011, and airlines in the MID Region have posted double-digit passenger traffic growth (RPK) several years in a row, showing stable growth in terms of aircraft departures. According to the ICAO’s Long Term Traffic Forecasts,  passenger traffic departing from the Middle East Region for the period 2015-2045 is expected to increase at an average annual rate of 4.6 per cent.

The forecasts of passenger traffic departing from the Middle East through till the year 2045 shows that the ASK (Available Seat Kilometer) which is now above 500 hundred million as an annual average, will nearly double by 2030 and triple by 2045 to reach 1.5 billion. The number of passengers departing from the MID Region, which is now at 150 million passengers, will also double around the year 2030, and triple by the year 2045. 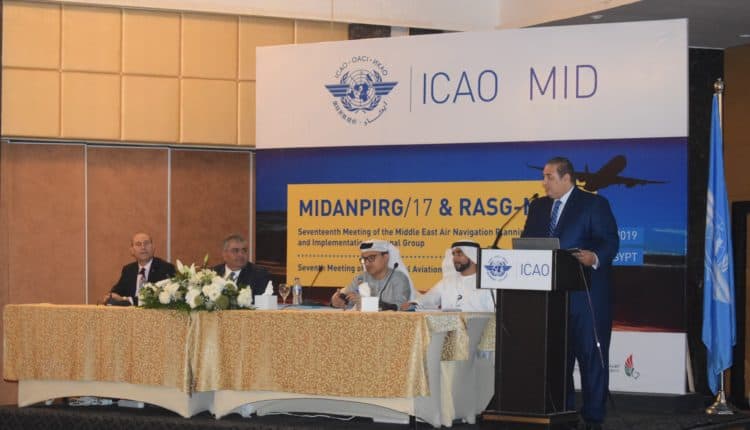 The same trend with the RPK (Revenue Passenger Kilometer) will have an average calculated growth rate of 4.6 and will go from barely under half a billion to more than 1.5 billion in 2045, showing a tripling of revenues. Looking at the fleet forecast we see that the fleet needed to absorb this growth will increase from the less than  1,500 aircraft today, to 4,640 aircraft in 2045 – and this covers only passenger fleet. For cargo, the fleet will grow from over 60 aircraft today to 272 freighters in 2045. This continuing growth of traffic in the MID Region places increased demand on airspace capacity, which necessitates an optimum utilization of the available airspace and airports.

The changes and developments in the civil aviation world happen very rapidly and frequently and we need to keep pace with these developments”, Mr. Rahma indicated.

He further noted that the 13th Air Navigation Conference, which was held in ICAO Headquarters in Montreal in October last year, agreed on many important recommendations, including a recommendation for States to ensure harmonization between their national aviation plans and other relevant national development plans. The Conference further recommended that these State plans include references that link aviation’s contributions to attaining the United Nations Sustainable Development Goals (UN SDGs). 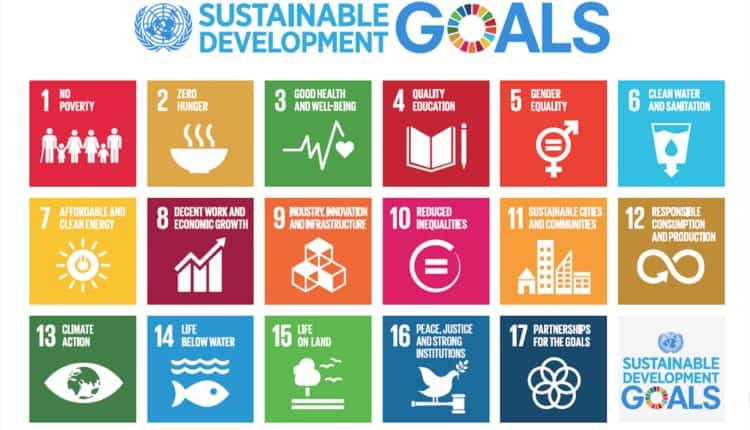 As a result, ICAO is eager to provide Member States with guidance on a structure and format that will facilitate the implementation of comprehensive and coordinated aviation development strategies aligned with the State’s development goals, the UN SDGs as well as the ICAO global and regional plans.

Highlighting ICAO’s upcoming 40th General Assembly and 75th Anniversary, as well as the upcoming DGCA-MID/5 Meeting hosted in Kuwait, Mr. Rahma emphasized that “This year is also an Assembly year; I am confident you are all aware that the ICAO 40th Assembly will be held at ICAO HQ, in Montreal from 24 September to 4 October 2019. Many important subjects will be addressed by the Assembly and we are expecting important Decisions would be taken, including the endorsement of the new GANP and new GASP.

I wish to also draw your attention to the celebrations this year of the 75th Anniversary of the Chicago Convention, which paved the way for world governments, cooperating through ICAO, to share their skies to the mutual benefits of humanity.

I would like to highlight also that in November this year, Kuwait will host the DGCA-MID 5 meeting; and as part of this important event, we will also celebrate the 75th Anniversary of ICAO. I wish to thank United Arab Emirates for the elegant celebration of the 75th Anniversary this month in Abu Dhabi and encourage all States mark this anniversary with various festive activities.” 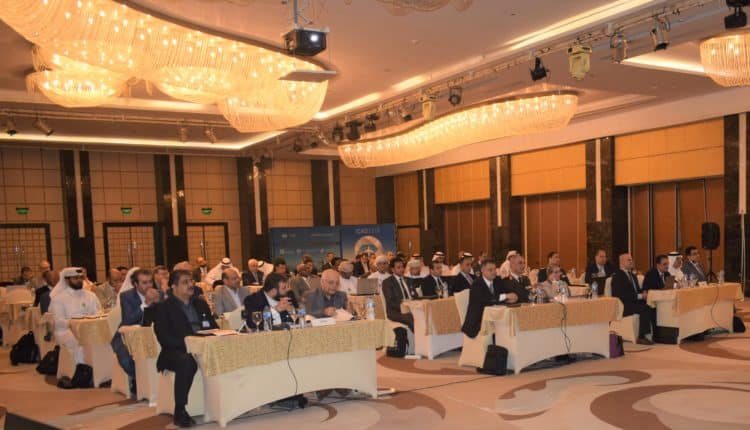 Mr. Rahma indicated that “Planning and Implementation Regional Groups (PIRGs) and Regional Aviation Safety Groups (RASGs) have been established by the Council to, amongst other items, identify regional priorities, implementation targets and indicators related to air navigation and aviation safety for the regional implementation of the Global Air Navigation Plan (GANP) and the Global Aviation Safety Plan (GASP), and provide actionable recommendations to the Council.

In addition to the crucial role of States in the PIRGs and RASGs activities, the collaborative and proactive role by airspace users, international and regional organizations, and industry should also be underlined. In this respect, I would like to highlight that PIRGs and RASGs serve as a regional cooperative forum that determines regional priorities, develops and maintains Regional Plans and associated work programmes. Based on the GANP and GASP and relevant ICAO Provisions, integrating global, regional, sub-regional, national and industry efforts, the PIRG and RASG role is paramount in enhancing safety, and efficiency of air navigation at regional and global levels.

To improve efficiencies, all aviation stakeholders, including States, International and Regional Organizations and the Industry should have an active role within the framework of MIDANPIRG and RASG-MID. The Chairpersons of both Groups and their subsidiary bodies have an important role for the coordination and management of the activities of their Groups, and provide leadership for achieving the agreed objectives, in close coordination with the Secretariat and the members of the Groups.”

Mr. Rahma drew attention to ICAO’s MID Office, which has been shifting to a different way of doing business, where States and partners share expertise, experience and best practices in order to provide recommended actions to achieve goals and performance targets and identify associated difficulties and challenges. And he noted that that there had been a change in the way ICAO meetings are conducted, with more involvement of States and stakeholders and with a focus on the priorities, achievements, challenges and recommended actions for the way forward.

Mr. Rahma concluded his speech by emphasizing the importance of ensuring No Country is Left Behind (NCLB) in the MID region noting that “the MID Region NCLB Strategy aims at a new leadership approach to transform the way business is done through agreement with concerned States on specific and measurable outcomes, and clear definition of accountability.”