Results of a Quarter of a Century of Successful Regional Cooperation 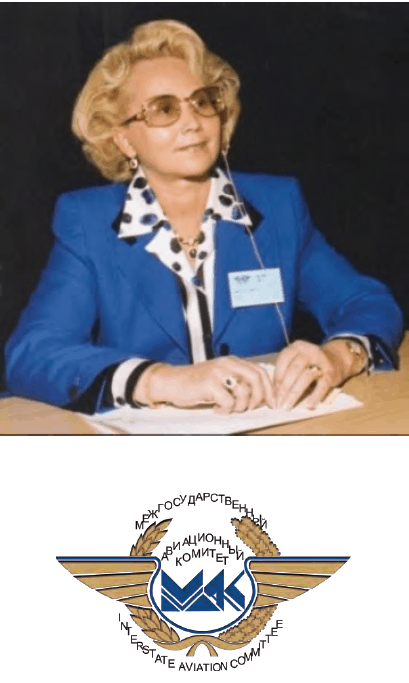 Over the years, we have been able to establish and implement the effective and balanced mechanism of the global and regional cooperation in the field of civil aviation and aviation industry which served as a model for similar organizations in other regions of the world with which we have successful cooperation.\

The Interstate Council and IAC are closely associated with paramount international decisions taken within ICAO, including:

For her eminent contribution into implementation of the international program as well as for civil use of the GLONASS System, as the major GNSS component, the President of the Interstate Council, Chairperson of IAC Dr. Tatiana Anodina received, as scientist and researcher, on behalf of 190 States the highest ICAO award – the Edward Warner Award.

During its close cooperation with the major aviation equipment manufacturers, the IAC Aviation Register certified over 150 types of aircraft and engines.

102 international aerodromes and 550 types of air navigation systems certified by IAC have contributed to the creation of a new quality international air transportation network.

IAC as an international independent body, registered in this status at ICAO, has conducted over 750 air accident investigations, including major fatal accidents in 76 countries of the world. Not one IAC investigation report has been challenged in judicial order.

ICAO’s assistance is of great importance in ensuring flight safety and aviation experts training is provided on the basis of ICAO-IAC Project.

Together with our colleagues from the International Transport Safety Association (ITSA), which comprises 17 independent investigation bodies in the world, including those of USA, Canada, UK, Netherlands, France, Japan, Australia, etc., which member we have been for 20 years, we do our best to preserve society’s confidence in air transportation.

We constantly inform our colleagues, as well as make public the information about air accident investigations in order to develop joint recommendations of global character, aimed at improvement of flight safety in international civil aviation. These recommendations are always forwarded to ICAO.

ICAO’s assistance is of great importance in ensuring flight safety and aviation experts training is provided on the basis of ICAO-IAC Project. Being one of the first projects in 2000 within the technical cooperation of COSCAP it is nowadays, according to the President of the Council, the most impressive example of long-term cooperation in flight safety. Within the Project over 9000 experts in flight safety and 14 operational regulations sets on flight safety for aviation authorities and airlines have been developed.

Practical cooperation in the field of assistance to the States within the framework of “continuous monitoring” (USOAP) is expanding. This assistance was very effective in Azerbaijan, Armenia, Kazakhstan, Kyrgyzstan, Russian Federation, etc.

Regional cooperation as the basis of our activity has become the significant topic within the framework of ICAO international activity as well.

Within the framework of activities on development of Standards and Recommended Practices as well as on the sidelines of conferences and forums held by ICAO there are increasing calls for enhanced regional cooperation in order to mobilize resources and achieve priority tasks in the field of flight safety. The positive results of establishment of regional accident investigation organizations (RAIO), as well as regional safety oversight organizations (RSOO) in Central and Latin America, African continent contribute to it.

Taking into consideration the experience of effective regional cooperation, IAC has submitted its initiatives aimed at the upgrading of flight safety of international civil aviation. Among them are the following:

We fully support the ICAO “No Country Left Behind” campaign. This principle along with the ICAO strategy “Uniting Aviation” is the basis for our work within the international community.

Taking this opportunity, the Interstate Aviation Council and the IAC would like to thank honored President of ICAO Council and ICAO Secretary General as well as the management of the ICAO European and North Atlantic Office for their constant assistance and support.

Doctor of technical sciences, professor, academician, Honorary Professor of the Moscow State University named after M.V. Lomonosov, honoured worker of science, State prizes winner, holder of the highest orders and medals of many states. In 1997 she was awarded the Gold Medal and the highest international prize of ICAO in the field of aviation and airspace – the Edward Warner Award, as a world-known scientist and prominent research worker.

She is the initiator of signing the Interstate Agreement on Civil Aviation and Use of Airspace in 1991 and also the initiator of establishing an independent aircraft accident investigation system and the international system of certification of aircraft and aerodromes.