In late 2017, ICAO began working on an initiative that focussed on the future of aviation. One of the visionaries in that journey was Charles Bombardier, an internationally recognized futurist who produced hundreds of designs through IMAGINACTIVE, a think-tank focussed on envisioning what aircraft might look like ten, twenty or fifty years from now. His mentorship and leadership inspired individuals at ICAO to contribute to the vision, an exercise that inspired a variety of activities, from airships to high flying gliders, to electric vertical take-off and landing vehicles (eVTOL). The ideas were catalogued in the Future of Aviation book. It became apparent that it was not enough to only focus on new designs, their purpose was just as important. This led to the creation of a series of videos in a collection that shows the potential that future aircraft have on improving the quality of life.

One of the key concepts envisioned by Charles and ICAO staff was the Ambular, an eVTOL conceived to rapidly fly a person facing a medical emergency to the hospital. The initial version was published in 2018. It was also featured in a short story from the comic book The Future of Aviation.  As interested staff at ICAO started to build on the ideas imagined by Charles and IMAGINACTIVE, they also realized that they needed to do some research in order to understand what the various steps in the realization of such concepts were. 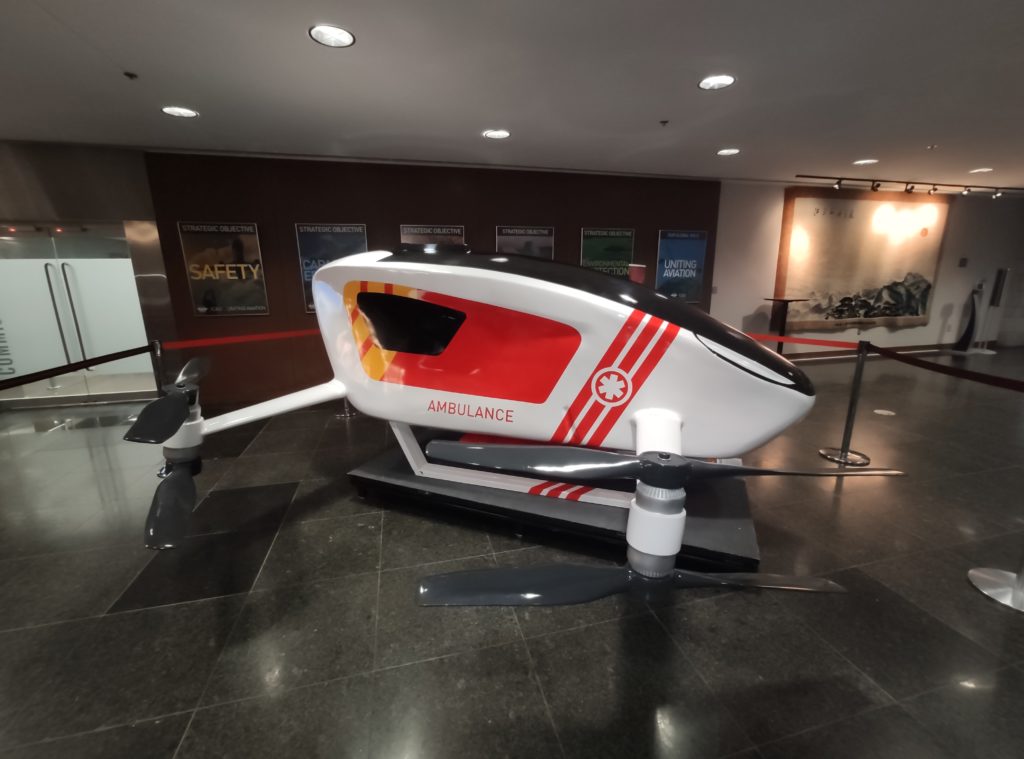 Every year around the world, December 7th is recognized as International Civil Aviation Day. As part of last year’s celebrations, the Ambular was unveiled during a ceremony at ICAO Headquarters. ICAO’s Secretary General, Dr. Fang Liu, opened the ceremony with a speech that highlighted the importance of looking to the future of aviation and pointed to ICAO’s involvement in related initiatives. Following her remarks, the ICAO team presented the ICAO supported Ambular.

It is imperative that those who set the international standards and recommended practices in aviation understand the methods, problems, risks and any other aspects that those who build the future of the sector experience when going through the realization process. After considering the lessons that would be learned if ICAO could actually build one of the ideas…the Ambular project was born.

The Ambular team also hoped that the pursuit of building the Ambular would serve as inspiration for ICAO colleagues and the wider aviation community.  It may also serve as a learning tool as the team engages in the process of figuring out how to unleash the potential of eVTOLs on improving peoples’ quality of life. The Ambular is a project run by volunteers – those interested are invited to contact the team for details on the website.

Early on in the design process it became clear that the Ambular should make maximum use of technologies that were proven to work and already available in the supply chain.  Taking that into account the team developed the 2nd version of the Ambular in the Spring of 2019.  The next logical step was to build various small scale prototypes, as well as one full-scale non-flying mock-up. It was this mock-up that was revealed in December 2019. 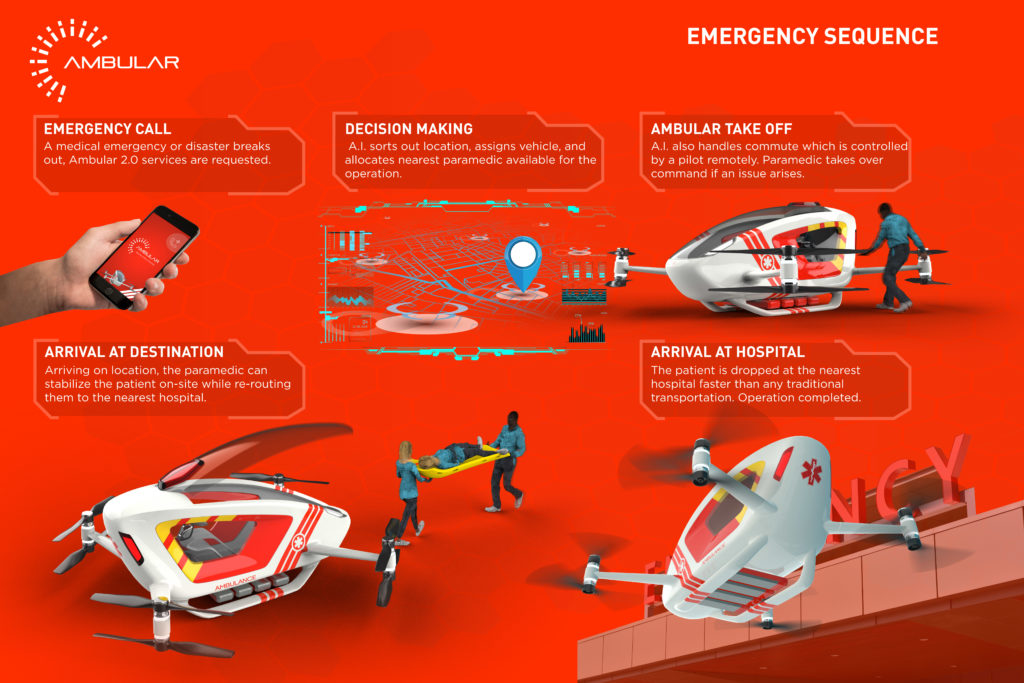 Going backwards to the summer of 2019, the team reached out to several academic institutions with the hope that one of them would be interested in collaborating on the project.  Their efforts resulted in a collaboration with the Concordia Institute of Aerospace Design & Innovation (CIADI). After two months of being on display at ICAO, the prototype was moved to Concordia University’s 4th Space, where there are windows into the labs, studios and classrooms where ideas take shape. The team took part in an aviation exhibition, the Take-off/Touch-down programming, from March 2 to April 7, where there were drones, planes, composite materials, and elements related to space and aerospace history on view for the university students to see.

The aim of this event was to make the high-flying world of the aerospace industry more accessible to university students and the public in general. The main questions that were considered reflect on mobility, drones, and the human factors of aviation, as well as green, sustainable aviation, women in aerospace and what’s next in space research at Concordia. A number of roundtables were organized for professors, students and industry to discuss how their work addresses these topics and to identify challenges, as well as opportunities. for the aviation industry.

On Wednesday, April 15, the first webinar with the Ambular team took place. Team members talked about the drone’s function as a new kind of emergency response measure and its potential capacity to increase responsiveness in the health system, especially in the current global context. The conversation can be found on the 4TH SPACE Facebook page.

It is hoped that later this year Aerospace Day 2020, a conference with the theme: The Future of Air and Space Mobility, will be hosted by CIADI. The Ambular mock-up will be exhibited on that day and several key players in the aerospace industry, as well as in other areas related to the theme of mobility and emergency response, will also be present.

The Ambular team is currently looking for sponsors interested in contributing to the project’s development. By showcasing the initiative to industry and academia during Aerospace Day 2020, the team will be able to present the benefits of joining such a project.

While the Ambular is an ICAO staff project, it was inspired by the Organization’s initiatives related to innovation in Aviation.  These efforts included the hosting of the first edition of the Innovation Fair (22 and 23 September 2019). The fair’s broad objective was to excite and educate the community on the possibilities that innovation presents, and to provide insight to key decision-makers, on how they can start-up innovation within their own States. The following week the 40th Session of the ICAO General Assembly adopted resolution A40-27 on Innovation in Aviation.

This year, the second edition of the Innovation Fair will take place during the week of December 8th with the broad objective of using innovations to enhance aviation regulations, performance and delivering on the United Nations Sustainable Development Goals (SDGs) through the air.  During 2020 ICAO will also work on the development of an Innovation Workshop, an event that is hoped to be delivered in the 2nd half of the year.

ICAO’s Ambular Team is comprised of volunteers from the ICAO Staff and is open to volunteers from across aviation. For more information or to join these efforts, please visit here.