The importance of English language proficiency in aviation

For pilots and air traffic controllers to communicate clearly and efficiently around the world, a universal aviation language had to be established. Both parties work closely together to exchange crucial information about the aircraft, flight, crew members, and passengers as well as other external factors and situational awareness that help ensure safe and efficient operations.

Aviation English is known globally for the phonetic alphabet, specific terminology and phraseology, and the universal jargon that we’ve likely heard in films or onboard a flight. It is actually a lot more complex. While much of the language is technical, functional command of English is necessary to pass along essential messages as clearly, fast, precisely and as naturally as possible, particularly when there is an emergency. Another advantage of having a standard language for pilots and air traffic controllers to communicate in is that pilots flying in the same airspace can monitor air traffic transmissions and increase situational awareness. 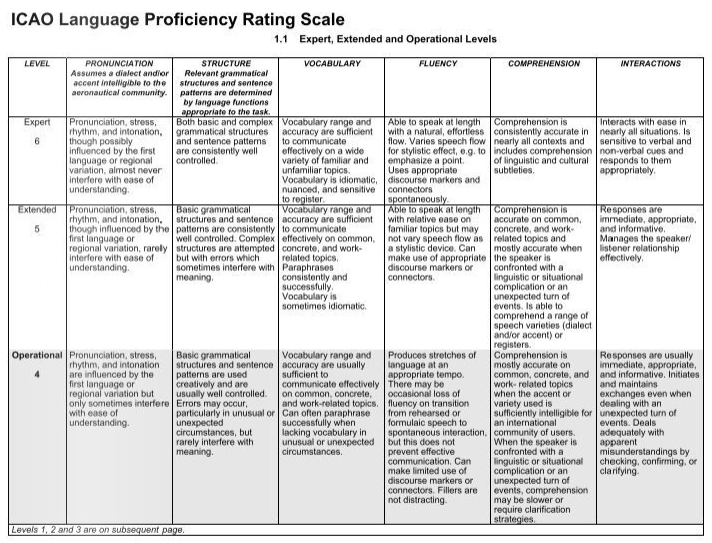 There are different language levels used to assess English language proficiency. Although the ICAO language rating scale ranges from 1-6, level 4 is the minimum level requirement for operations, with level 5 (extended level) and level 6 (expert level). Regardless of the proficiency level, testing assesses listening, comprehension, and speaking skills in addition to pronunciation, sentence structure, vocabulary, and fluency.

The validity of the test depends on the proficiency level acquired. Native English speakers and those who dominate the language at the expert level (6) do not need to be reevaluated. Those at level 4 have to test every three years, while those at level 5 every five years.

Safety is a number one priority in aviation, and effective communications are a contributing factor. Slight misunderstandings in language between pilots and air traffic controllers could affect the meaning of a message and become an obstacle that could lead to severe consequences. Introducing language proficiency requirements to demonstrate adequate knowledge of English is an extra layer of safety since there is less room for error or misinterpretation. Pilots and air traffic controllers require intensive training and a series of requirements pre, during, and throughout their careers, and demonstrating language proficiency is one of them. We know that the key to a successful relationship is effective communication, and it couldn’t be more applicable in this field.

Looking beyond the pandemic: implementing the Global Reporting Format for runway…