On International Mountain Day: the risks and advances in mountain flying

Mount Everest, Mount Kilimanjaro, Mount Fuji, K2, the Mont Blanc, Mount Olympus are some of the highest, most famous peaks in the world. Their names alone fill people with a sense of awe and wonder that has been fed by stories of adventurous climbers and mystic tales of mountain tribes.

11 December was designated by the United Nations General Assembly as “International Mountain Day” in 2003. The aim is to raise annual awareness about their ecological and cultural importance for the livelihoods of mountainous communities and highlight the necessity to preserve mountain ecosystems for future generations. This year’s theme “Mountain Cultures: celebrating diversity and strengthening identity” was chosen to focus on traditional heritage and promote the richness of mountain cultures.

How does aviation come into play?

In today’s world, interconnectedness has become indispensable and air transport, since it is free from physical barriers like rivers, valleys and mountains, ensures accessibility to some of the most remote regions and communities.

Though major urban centers that are divided by mountains require high altitude airports to grow and thrive, the majority of aerodromes are established at sea level, and only 3% of international aerodromes, representing 48 airports, are above 1500m.

Establishing an airport at a high elevation and maintaining and conducting operations there isn’t typical. It calls for prerequisites that are different from regular airports, because at high altitudes, many factors come into play that often complicate operations. Runways need to be on relatively flat areas, a challenge when high elevation airports have to be established around complex terrains and valleys.

Unpredictable weather in these regions is also a cause of concern for pilots who often have to deal with rapidly changing conditions such as strong winds and low visibility. Moreover, as height above sea level increases, atmospheric pressure becomes relatively lower which leads to thinner air and reduced air density (denser air ensures better aircraft performance.)

As a result of these factors, lift is reduced since it takes more time to attain the necessary take-off speed to produce it. Similarly, low pressure leads to reduced air resistance and available drag which makes it harder for the aircraft to slow down during landing. Consequently, aircraft need to be equipped with special tires and airports must meet certain specifications, such as having longer runways to handle higher takeoff and landing speeds. These specifications are contained in the Airport Planning Manual (Doc 9184) and the Aerodrome Design Manual (Doc 9157). Further, the flight crew is also subject to prior simulation exercises and enhanced training. In fact, very few airplanes and pilots are qualified and permitted to fly and land in such aerodromes.

The map below, which can be accessed in its interactive version here, shows the 200 aerodromes closest to mountain chains. The Andean Mountains in South America, the western coast of Canada, the European Alps, and the Himalayas in Asia have the highest density of such aerodromes. 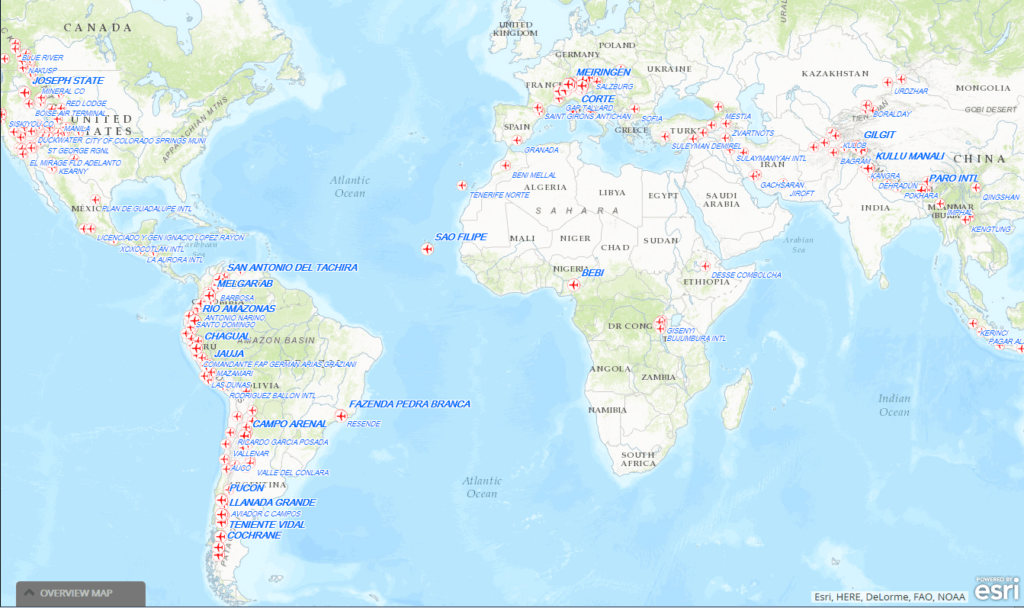 The 3D interactive map shows impressive cases of runways, which are highlighted in red, that are particularly close to cliffs and mountains demonstrating the level of difficulty pilots face and the precision needed for maximum security. The well-known case of Innsbruck for example (pictured below), illustrates the complexity of the approach since descending there involves avoiding a 2,400m mountain; navigating unavoidable turbulence; and traveling through a deep mountain valley. 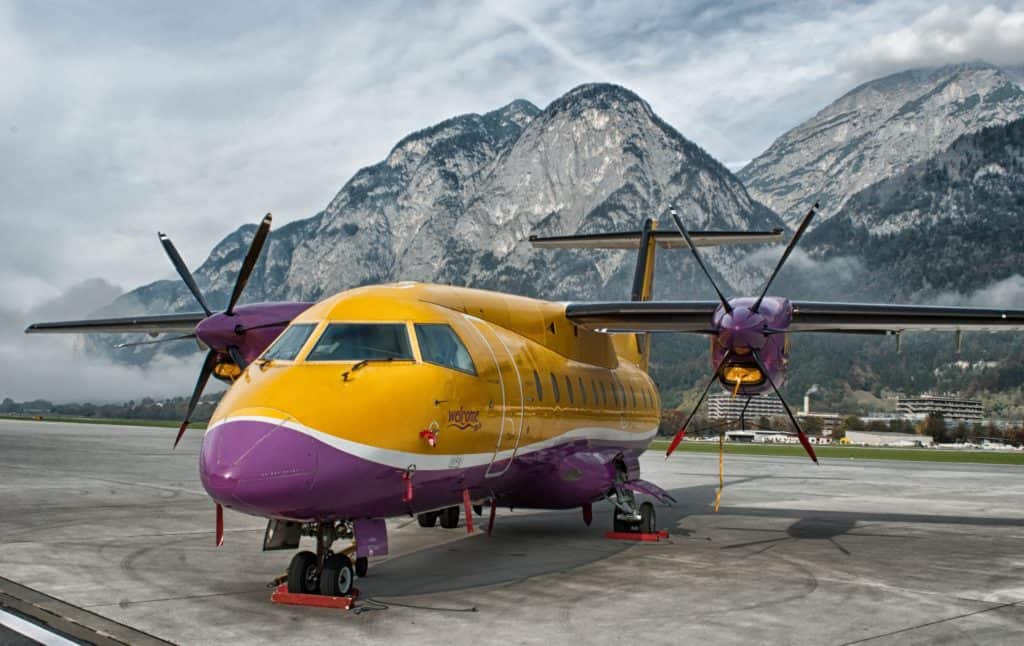 While the risks are certainly present, flying in mountainous regions and aerodromes has never been safer and has even brought efficiencies to the air transport system. Today, Performance-Based Navigation (PBN) uses satellite navigation to create fuel and time efficient routes based on airspace way points rather than the high maintenance physical ground marks used years ago. 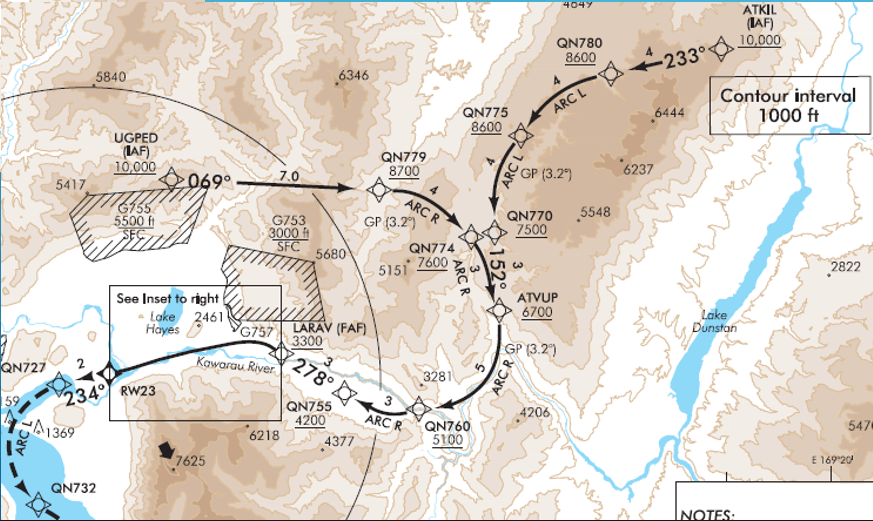 What are the risks associated with flying close to mountain chains?

The threats pilots face while flying through mountain chains pose serious risks. Terrain awareness is primordial since the terrain in such regions can quickly vary, imposing abrupt changes in obstacle height on pilots. The wind is an important factor to consider on journeys in mountainous areas since it can change abruptly and lead to significant clear air turbulence.

Adequate visibility is another safety aspect that must be considered since a brief decline in visibility can cause a Controlled Flight Into Terrain (CFIT) hazard. This occurs when valley parts or mountain passes are in shadows, when flying towards the sun, due to the increased glare or during snow showers or thunderstorms. Finally, supplemental oxygen is important. Mountain flying means decreased oxygen levels which could potentially cause hypoxia and thus a momentary loss of situational awareness for passengers and crew members.

As a means to inform pilots of obstacles ahead, Don Bateman, an engineer who is credited with developing one of the most important safety technologies in aircraft today, invented the Ground Proximity Warning System (GPWS), a device in the aircraft containing 2 altimeters that gather data directly below the plane and issues reactive warnings to rising terrain. Annex 6 – Operation of Aircraft, Part I- to the Convention on International Civil Aviation, requires its installation for certain aircraft weight categories.

The Enhanced Ground Proximity Warning System (EGPWS), also known as Terrain Awareness Warning System (TAWS), contains a database with all airports, terrain and obstacles. It uses a GPS system to define the aircraft’s position and compare it with the existing database, and gives pilots timely, predictive alerts for potentially hazardous flight conditions, greatly enhancing safety particularly in hard to navigate areas. Annex 10 – Aeronautical Telecommunications – to the Convention on International Civil Aviation requires the carriage of GPWS as well as EGPWS on all aircraft with a maximum take-off weight in excess of 5,700kg.

Despite all the innovations increasing the flights’ safety there are still planes that are crashing into mountains. We were tragically reminded of this two weeks ago with the loss of LaMia 2933, which claimed the lives of 71 people.

Enhancing safety for airplanes flying in close proximity to mountain chains has proven crucial to ensure disaster response efficiency in these areas. Whether it be in response to avalanches, earthquakes, landslides, mountain fires, volcano eruptions, plane crashes or to assist stranded and injured individuals, air transport is usually the first means of providing help. When roads are inaccessible and infrastructure is destroyed, first responders turn to the skies for help.

From another perspective, the World Food Programme (WFP) is often involved in disaster relief situations through the WFP Aviation and UN Humanitarian Air Service (UNHAS). The latter aims to assist the world’s most isolated communities in times of need with a fleet of more than 70 chartered aircraft.

One example of these efforts occurred after a massive 7.8 magnitude earthquake hit Nepal on 25 April 2015, when aftershocks triggered Mount Everest’s deadliest avalanche, leaving wounded climbers in dire need of assistance. UNHAS deployed flying search and rescue teams, as well as medical personnel, to mountainous villages and base camps four days after the earthquake hit, transporting 3,632 passengers and more than 2,699,400kg of cargo. 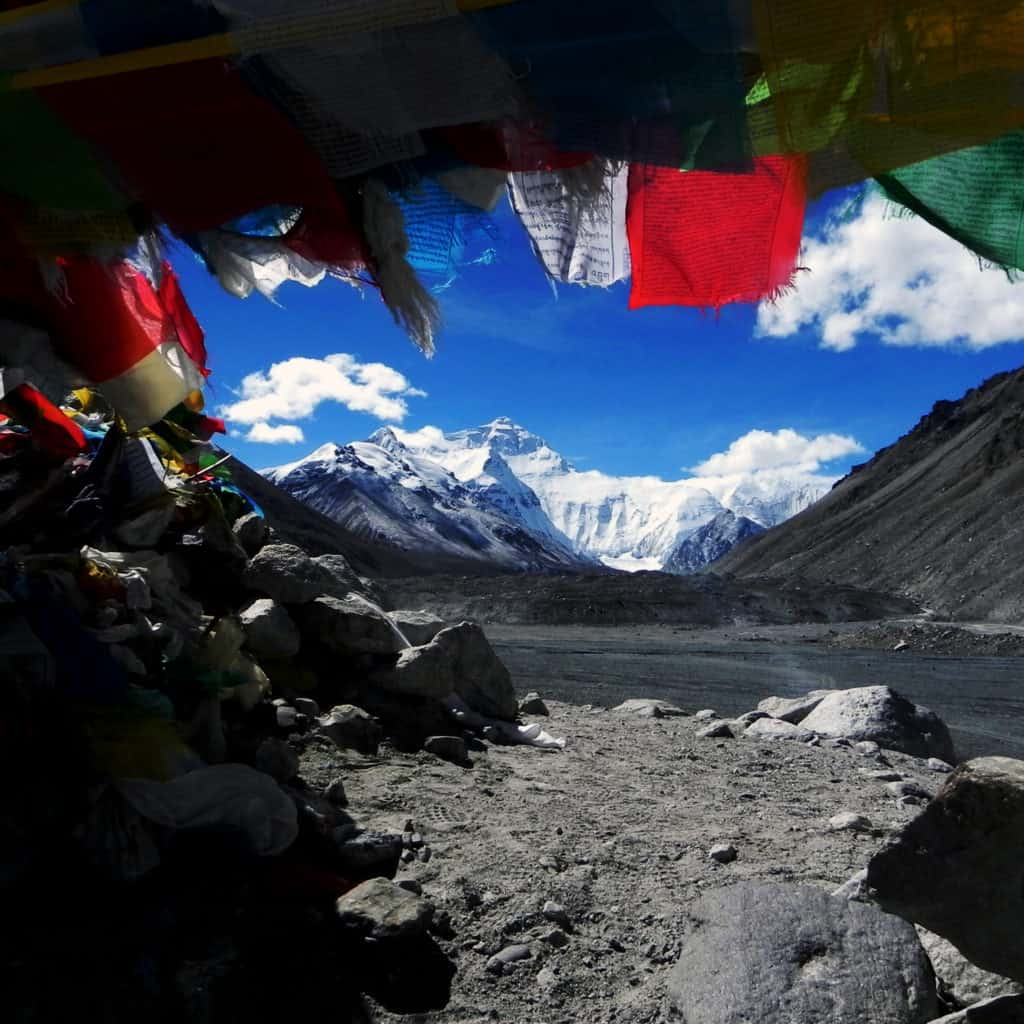 Benefits of aviation to mountainous ecosystems and communities

Mountain communities understand that their livelihood and well-being depends on the environment. In our increasingly urbanized world, their cultural traditions, knowledge and various sustainable exploitation techniques intrigue people around the world. They have become important tourism regions that are principally accessed via air transport.

Mountain tourism is very diversified in landscape and purpose. In the Alps, Courchevel altiport prides itself as being the highest asphalted runway in Europe at an altitude of 2,010m. It welcomes light aircraft and small private jets of skiers and winter sportsmen. In Lukla, Nepal, the Tenzing-Hillary airport is the gateway to Mount Everest for adventurous climbers or spiritual pilgrims. Finally, Cusco, the UNESCO world heritage site and capital of the Inca empire, welcomes international archaeologists and ancient history enthusiasts through one of only two airports in the world that are more than 3,000m above sea level.

Air transport contributes to environmental protection by avoiding the construction of roads and railways. In addition, mountain tourism plays a role in promoting the culture of isolated communities and in raising awareness about the protection of the diverse mountain ecosystems. Aside from improving infrastructure and creating jobs, an airport in communities located in high altitudes can provide opportunities to communicate their cause at the international level, promote sustainable development and support women’s empowerment.

Thanks to air services, even the most remote areas can be linked to the global market contributing to the attainment of the UN 2030 Agenda by improving living standards and alleviating poverty through trade and socio-economic integration.

Overall, ICAO assists its Member States in increasing air connectivity between, and within, mountains and urban centres. In doing so, it ensures their sustainable development in a way that stimulates their economies while preserving their undisclosed secrets for future generations to discover. 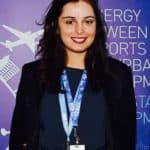 Sara Maria Moubarak is a B.A. graduate in Economics and International Relations from McGill University. Her passions include international trade, environment and sustainable development. She also enjoys exploring and relating leading issues in aviation back to the UN Sustainable Development Goals. Sara is currently an intern in the Strategic Planning Coordination and Partnerships Office at ICAO.