Though collisions between passenger aircraft are among the most catastrophic accidents imaginable, airborne collision avoidance systems (ACAS) can advise pilots in near real-time on how to avoid potential collisions. To be able to meet the demands for more operational flexibility with a potential reduction of separations, a new type of ACAS – ACAS X –  has been introduced. 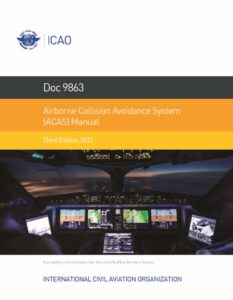 ICAO recently released the third edition of the Airborne Collision Avoidance System (ACAS) Manual (Doc 9863). This latest edition, available in the ICAO Store, aims to meet the demands for more operational flexibility with a potential reduction of separations. The last edition of ACAS was released in 2012.

This new and improved ACAS was initiated to solve operational issues, such as unnecessary alerts, and accommodate new procedures. The manual describes general technical guidance and operational differences between ACAS X, the existing ACAS II systems and functional aspects, including recommended training and considerations to intruders with very high vertical rates. By implementing ACAS X, it is expected that nuisance alerts will be minimized while maintaining existing safety levels.

ACAS was designed to determine strategies for avoiding collisions following the first mid-air collision that occurred in 1956 over the Grand Canyon, killing all 128 passengers on board and the crew of both airliners. As many states worldwide began developing airborne collision avoidance systems, ICAO developedACAS prototypes by early 1970. Despite the challenges the aviation industry has faced over the years, ICAO’s Technical Officer, Communications, Navigation and Surveillance, Mie Utsunomiya, is proud to say that air travel is incredibly safe nowadays.

“This accomplishment has been made possible not only thanks to the deployment of ACAS, but because of several other similarly successful efforts, such as the development of appropriate operational procedures and training initiatives for flight crews and ATC,” she added.

In an interview for ICAO TV, Utsunomiya gave an overview of what the manual’s third edition is about and explained its purpose more in-depth. During the interview, she also pointed out that ICAO tried to use more general words and terminology to make it easier to understand.

“The manual also tried to promote proper operation and implementation of ACAS,” she said. “It includes a detailed technical description of ACAS and associated technical and operational issues that are required to be understood correctly.”

This is the ultimate air traffic management publication bundle