By Uniting Aviation On May 21, 2020
Image source: Loon
10,647
Share FacebookTwitterLinkedinEmailPrint

As part of its efforts to engage with aviation industry and stakeholders, ICAO’s Air Navigation Commission (ANC) has been organizing ANC Talks. The collaborative approach of ANC Talks is aimed at staying connected on important matters that are happening today around the world. 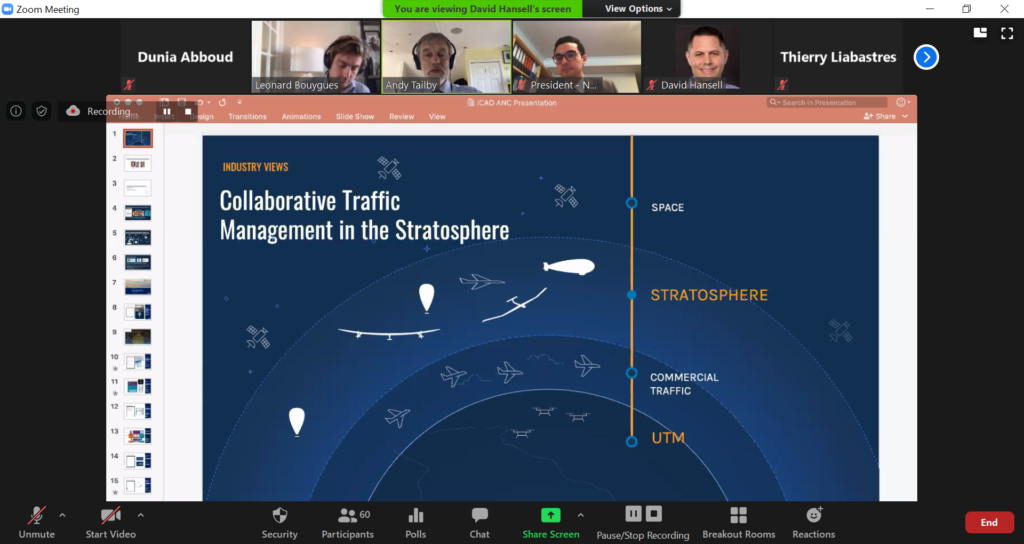 In conversations between the stratospheric community and Civil Aviation Authorities (CAAs) and aviation regulators around the world, there is agreement that the technology to undertake operations in the stratosphere is currently available. The vision for the future involves collaborative air traffic management; a system that is able to give the global aviation community the opportunity to fully validate risk and performance-based concepts in what remains today a low-density environment. This is seen by stratosphere players as a vital and important step in the overall air traffic management integration efforts at all flight levels, from the surface, all the way up.

Although there aren’t many aircraft operating in the stratosphere at the moment, with certainty there will be. One aspect these aircraft share is that they are not very amenable to conventional traffic management techniques or to the more conventional concept of last-ditch collision avoidance. For this reason, organizations currently operating in the stratosphere prefer to focus on pre-emptive intent-based separation provisions. 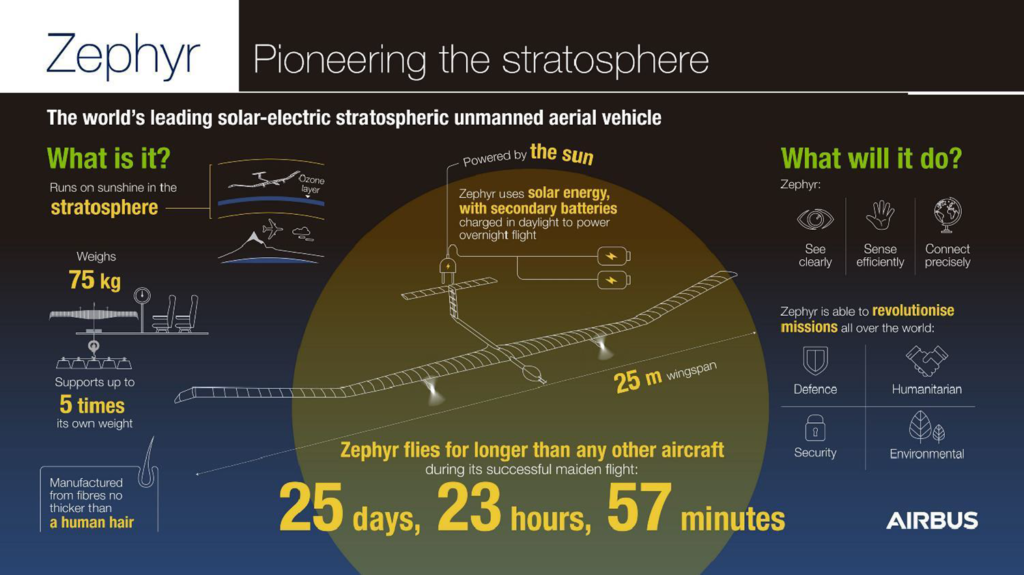 Zephyr was developed by Airbus to exploiting the stratosphere with a solar electric high-altitude, long-endurance, remotely piloted aircraft. Zephyr is neither a satellite nor an aeroplane, rather it combines features of the two, and although the current Zephyr S model is in low-rate initial production, its design will evolve over time. The vehicle can fly because it has a synergy of a number of cutting edge technologies. Though to date, it has flown for 26 consecutive days, the aircraft as it currently exists is capable of flying for far longer than that – certainly six months, probably a year. 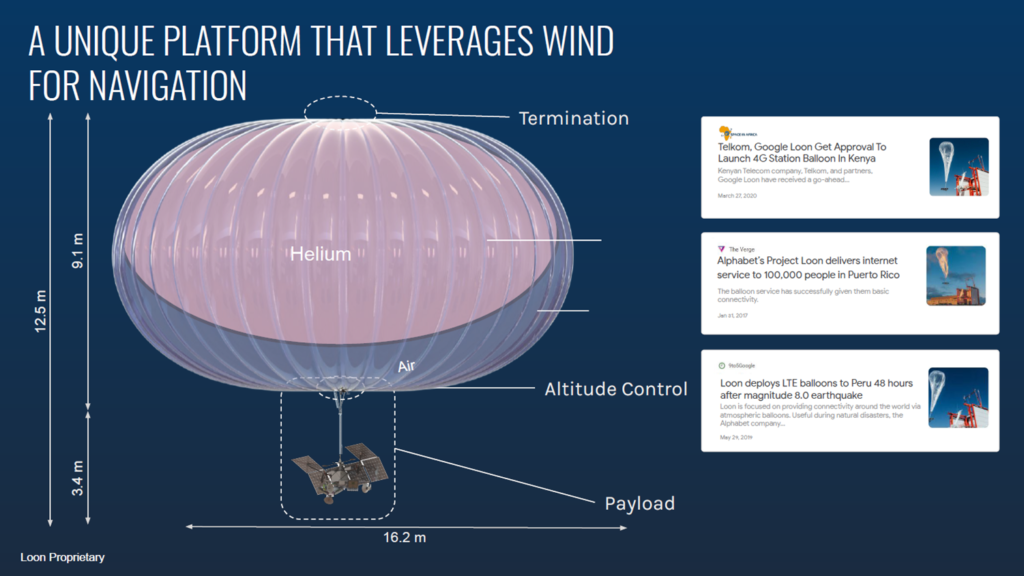 Loon, on the other hand, is a network of high altitude balloons that provide internet connectivity around the world. These balloons travel on the edge of space, delivering connectivity to people in unserved and underserved global communities. With ICAO’s Strategic Objectives strongly linked to 15 of the 17 United Nations Sustainable Development Goals (SDGs), the ANC noted that Loon directly supports SDGs 9 and 17 and the ICAO No Country Left Behind (NCLB) initiative. The discussions encouraged aviation solutions that are compliant with ICAO SARPs and would help to achieve the SDGs (bringing the internet to underserved parts of the world). Loon has provided connectivity in Kenya and in post-disaster relief efforts after tragic natural disasters, such as Hurricane Maria in Puerto. 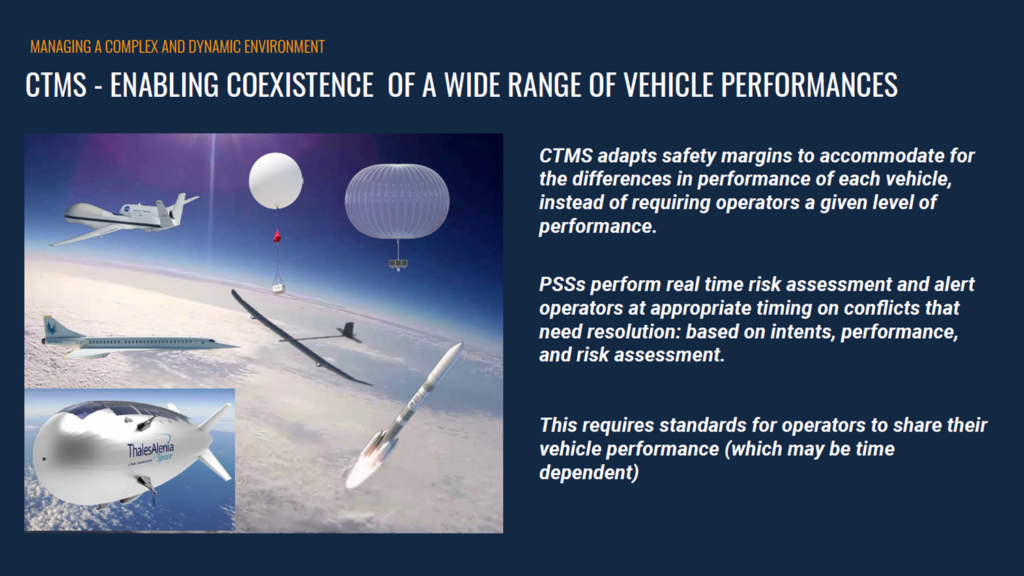 Currently, the obligations of Zephyr and Loon are to avoid bumping into each other. This is classified as a human-centric, position-based and somewhat limited version of Collaborative Traffic Management (CTM), a process focused on Loon’s Air Traffic Monitor Web-based system which allows Airbus to know where Loon balloons are located. Both are monitoring this system. In addition to this monitoring, before even flying, both share key information about their respective crafts, key pieces of information that allows both to establish air traffic management protocol, consequently laying the foundations for an agreement on how to deal with a potential conflict.

Today’s available tools are simple, very precautionary, bilateral and human-centric, and perfectly suited for the existing stratospheric actors. Though in the short term bilateral agreements work well, this cannot be sustained at a larger scale and is not cost-effective with the current system.  As the future CTM system gains complexity, a number of key features of the simple version will be retained, such as boundaries between ATM and CTM’s de-confliction flight level (DCFL). The protocol may manifest itself in an automated form and conflict identification and resolution will be carried out using a platform service supplier, as well as specific communications and procedures. Thus, a broad consensus amongst all stratospheric users will be to move towards this kind of solution, to automate conflict resolution rules and to accommodate diverse vehicle dynamics.

The opportunity exists in this low-density traffic environment to learn from safe near-term operations and to take this knowledge into the future space. Stakeholders are already learning together and sharing information about stratospheric operations. It will be important to strive for harmonization of what CTM will look like globally. This will have to apply to both oceanic and territorial airspace to ensure a continuum of the basic principles, recognizing that the best overall solution might challenge some expected norms. As examples, the variable de-confliction model will need to be defined, barometric altitude references will need to be replaced with alternatives, the collision avoidance criteria will need to be embedded in a cooperative traffic management system of a risk-based and performance-driven nature, and finally, it is critical to learn from UTM and U-Space, not just for CTM but for the benefit of the whole air traffic management.

In order to create an ecosystem that fits all different aircraft that operate in it, there cannot be a one-size-fits-all system nor a unique type of service. Instead, CTM will need to adapt to the future complex operations and dynamically compute safety margins in order to accommodate differences in the performance of vehicles, rather than requiring operators for a specific level of performance. But this will require that operators exchange their performance in a real-time basis based on their current capability. This requires the development of standards that enable operators to share their vehicle performance at a current time so real-time risk assessments can be performed and alert operators at an appropriate timing, initiating as a result, conflict resolution. 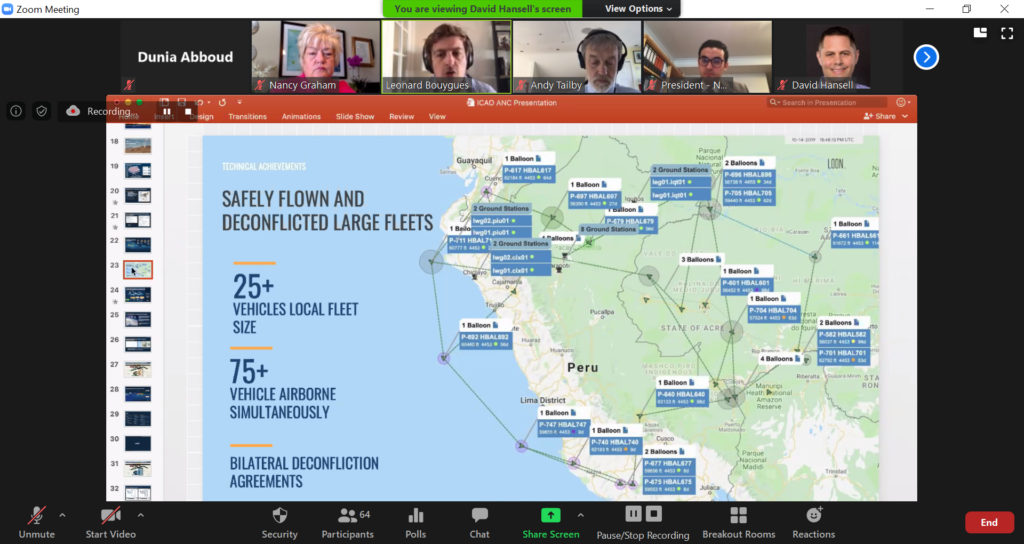 The anticipated vision is that, above the de-confliction flight level, stakeholders will build machines that talk to machines that can perform those functions of coordination and eventually conflict resolution. Below that level, where there is regular traffic, the expectation is that they will perform according to existing rules. What is expected is the development of a series of standards by a standards organization. The collaboration between the current stratospheric operators is allowing them to agree on a series of cooperative standards that can be embraced and endorsed by aviation regulators.

To conclude, whatever system will be put in place, for it to effectively manage stratospheric operations at scale, it will need to be truly harmonized globally. Now, more than ever, ICAO is looking for industry partnership and input into what stratospheric operations and what unmanned traffic systems may look like in the future. Continued collaborative efforts in regulation, research and industry cooperation, partnered bilaterally with all stakeholders – stratospheric operators, CAAs, Air Navigation Service Providers (ANSPs) and Regional Organizations – will contribute to the development of concepts of operations that are safe, non-intrusive on air traffic management systems, and not deleterious for any of their commercial aviation partners.

After this ANC Talk discussion concluded, Nabil Naoumi, the President of the ANC, and the invited experts had a short discussion about stratospheric operations. Excerpts from this are shared in the video below.