You’ve heard alfa, bravo, Charlie…but do you know where it came from?

When a pilot communicates with air traffic control, static and other interferences often lead to confusion with English language letters. ICAO developed the International Radiotelephony Spelling Alphabet to ease communication via telephone or radio and avoid misunderstandings when parts of a message containing letters and numbers are spelled out. Also referred to as the ICAO Phonetic Alphabet and the NATO Alphabet (with some modifications), this universal spelling alphabet is a set of words used to clarify messages, no matter the spoken language. Members of the military, police, airline pilots and others working in the aviation and travel industry commonly use it. 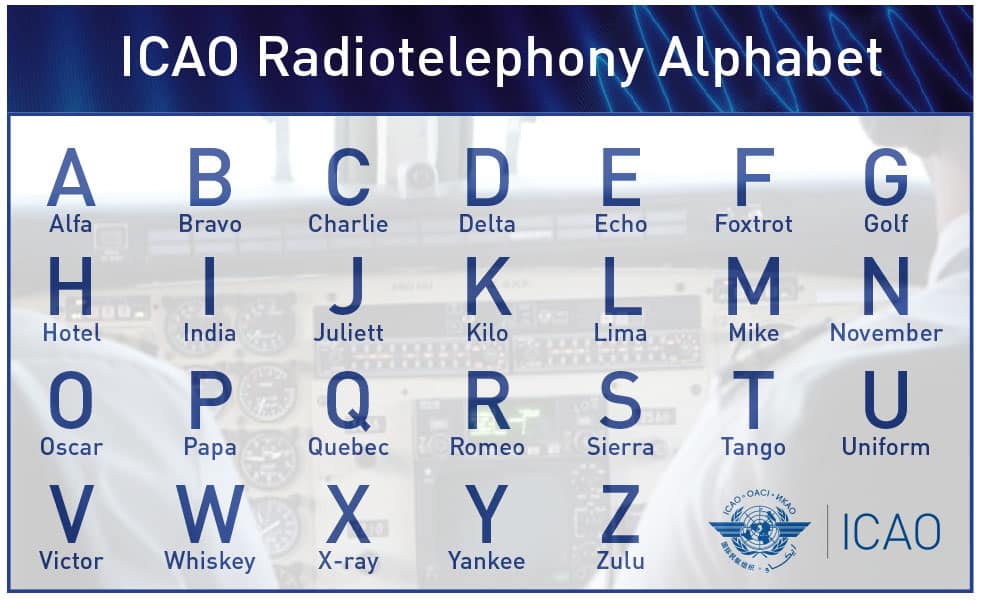 With short and simple words, ICAO’s phonetic alphabet lowers the chance of misunderstandings and increases operational safety for passengers and crew. Because some letters sound similar (M and N or G and J), it can generate confusion between two people communicating with different accents or when the communication lines are poor. The phonetic alphabet helps limit confusion between the cockpit and the tower.

Not only are the letters in the ICAO phonetic alphabet assigned, but so are the numbers. Similar to the letters, the aim is to avoid confusion with other similar numbers. Therefore, a few of them are pronounced differently from their standard English pronunciation. Those include the number three, pronounced as tree (tri), five as fife and nine as niner. Consider an aircraft tail number such as M345N. Over the radio, this would be said as “Mike, tree, four, fife, November.”

ICAO adopted its phonetic alphabet 70 years ago, on 1 November 1951, as a universal standard for communicating English letters over a phone or radio. Dissatisfaction with the existing internationally recognized phonetic alphabet submitted to ICAO for consideration led to the first draft of a proposed single universal alphabet. Through 1948 and 1949, Jean-Paul Vinay, professor of linguistics at the Université de Montréal in Canada, collaborated with ICAO’s language sector to develop a new spelling alphabet. The minimum requirements for the words were to have similar spelling in English, French, and Spanish and to be live words in each of these languages.

After those studies and following consultations with communications experts and comments from all ICAO Member States, a new ICAO alphabet was adopted and incorporated in the Aeronautical Telecommunications Annex 10 for implementation in civil aviation. The words that represented the letters C, M, N, U and X were replaced, and the Organization completed its final version on 1 March 1956, which is still in use today worldwide. You can learn more about the development and implementation of this alphabet in the ICAO Museum, which is situated inside ICAO’s Montréal Headquarters.