The numbers that are shared in the article below reflect the numbers in February 2021. The analysis of the economic and aviation indicators we share here reflect the continuing impact of COVID-19 on this industry.

World Results and Analyses for February 2021 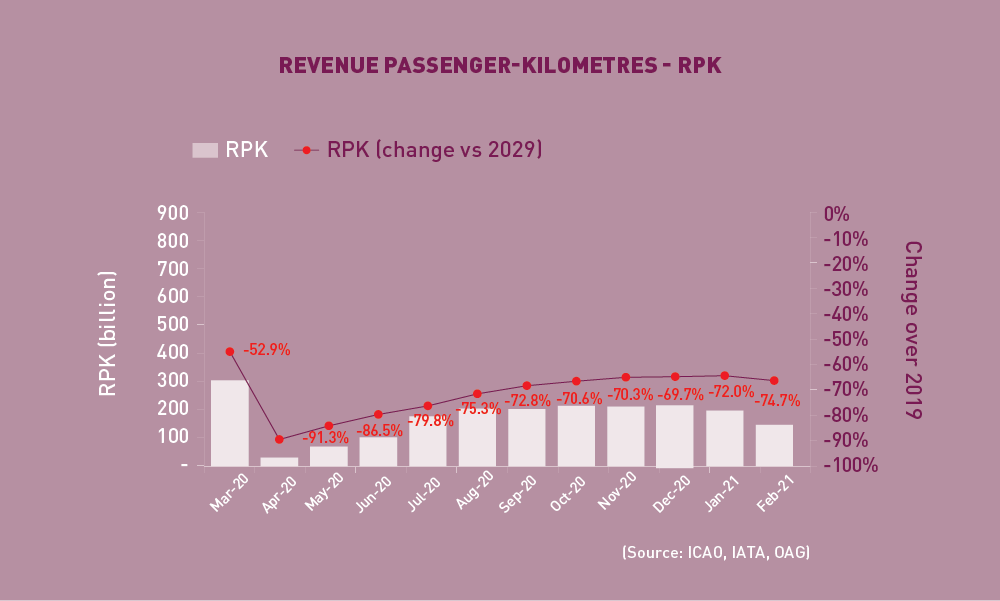 World passenger traffic fell by -74.7% in February 2021 (compared to 2019), -2.7 percentage points lower than the decline in the previous month. Surging new COVID-19 cases along with stringent travel restrictions have caused further deterioration in both international and domestic traffic. All regions contributed to the global weakness, with Asia/Pacific and Europe recording the largest slowdown. While improvements were observed in domestic Australia and the US, most major domestic markets trended downward, particularly domestic China which marked a slump. 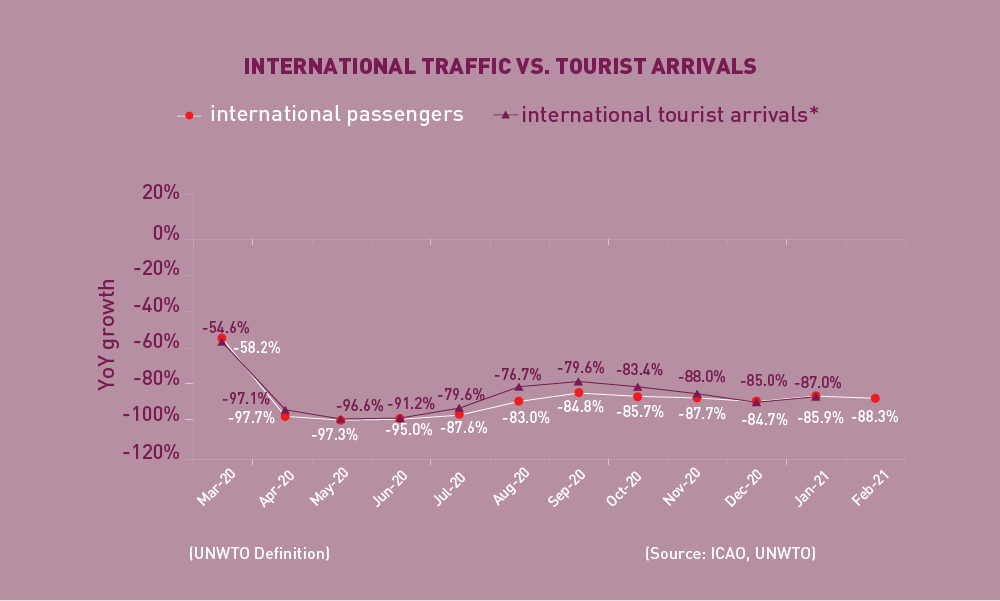 International passenger numbers fell by -88.3% in February 2021 (compared to 2019), -3.3 percentage points down from the decline in the previous month. Travel restrictions remained strict, and international traffic worsened for all regions, particularly Europe and Latin America/Caribbean. 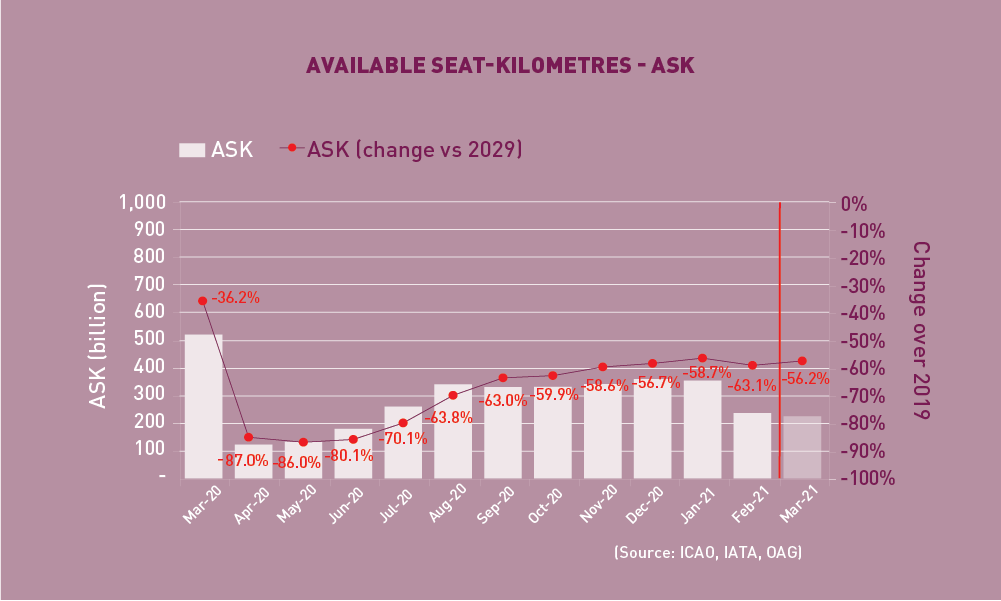 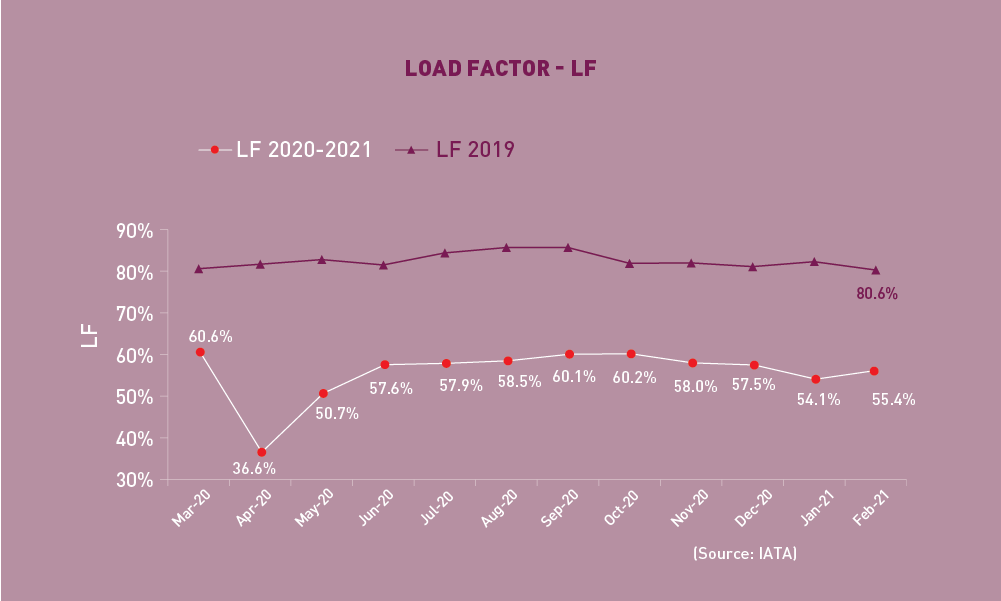 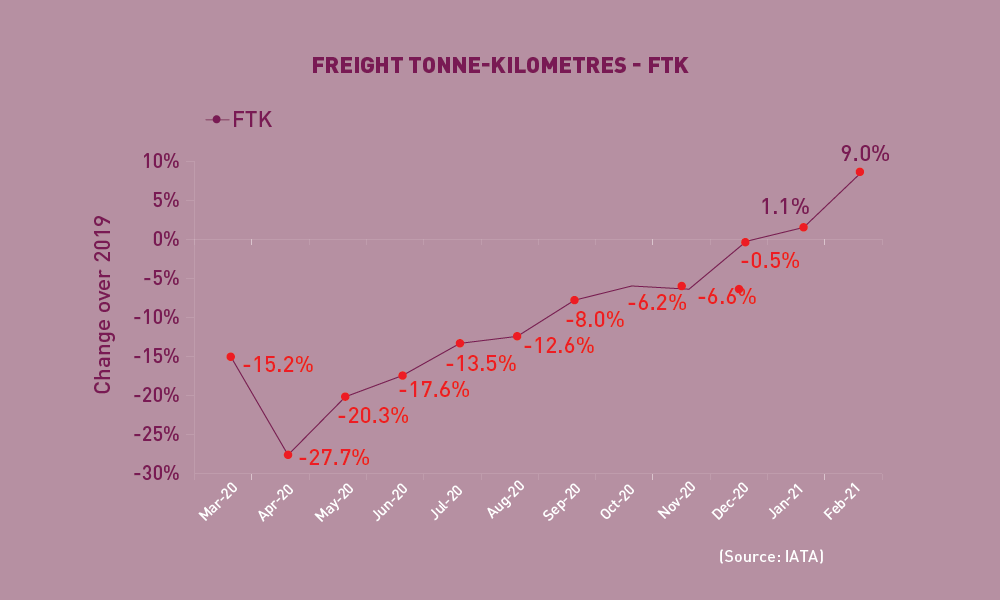 World freight traffic reported a growth of +9.0% in February 2021 (compared to 2019), +7.9 percentage points up from the growth in the previous month. In contrast to passenger traffic, freight traffic continued to rise sharply, despite the intensified pandemic situation. Air cargo demand remained strong, supported by the robust developments in manufacturing and goods trade during the global economic recovery. All regions, except for Latin America/Caribbean, showed expansion in freight traffic. Africa recorded the fastest growth and topped the growth chart, followed by North America, which also expanded double-digitally. Latin America/Caribbean continued to lag behind other regions and was the only region with a decline from the 2019 levels. 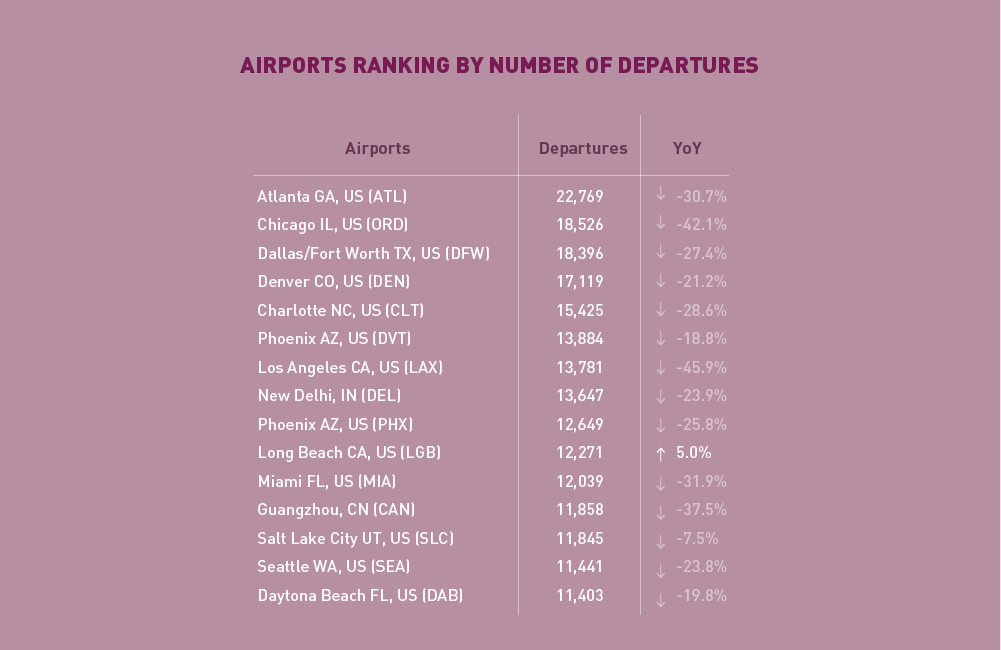 In terms of aircraft departures, the Top 15 airports reported a combined fall of -28.0%, compared to 2019. Unlike previous months, the Top 15 was dominated by mostly US airports with two airports in Asia/Pacific. Atlanta retained the 1st position with a -30.7% decline. Long Beach was the only Top 15 airport recording a positive increase of +5.0%. 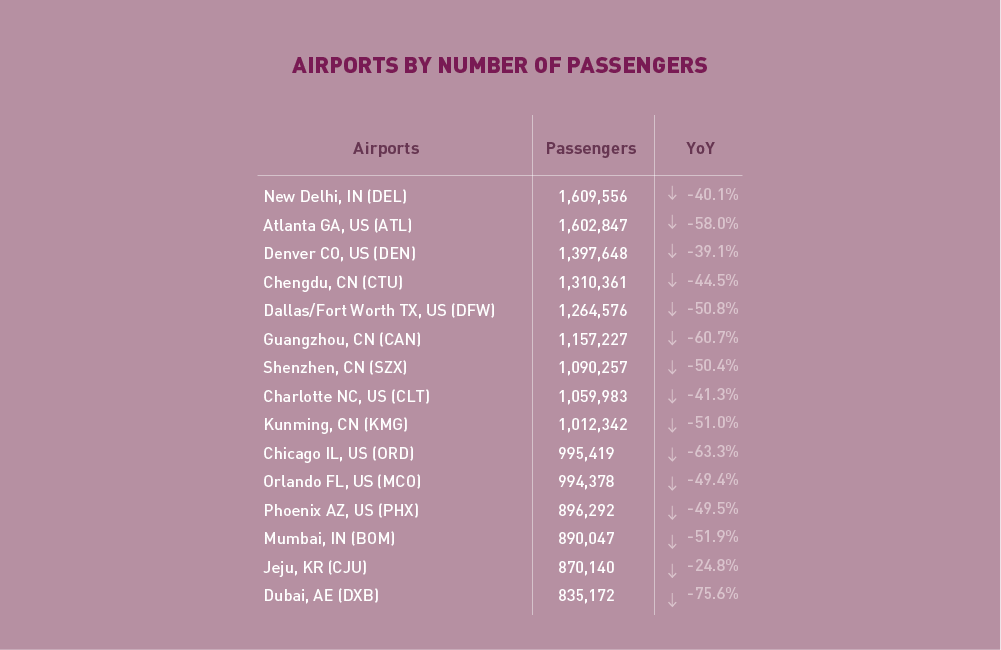 In terms of passengers, the Top 15 airports posted a total fall of -52.3%, compared to 2019. Rankings changed significantly in February. In addition to the US and Chinese, a few airports in Asia/Pacific and the Middle East also appeared in the list. For the first time, New Delhi became 1st, albeit with a large YoY decline. The smallest fall was posted by Jeju (-24.8%) and Denver (-39.1%). 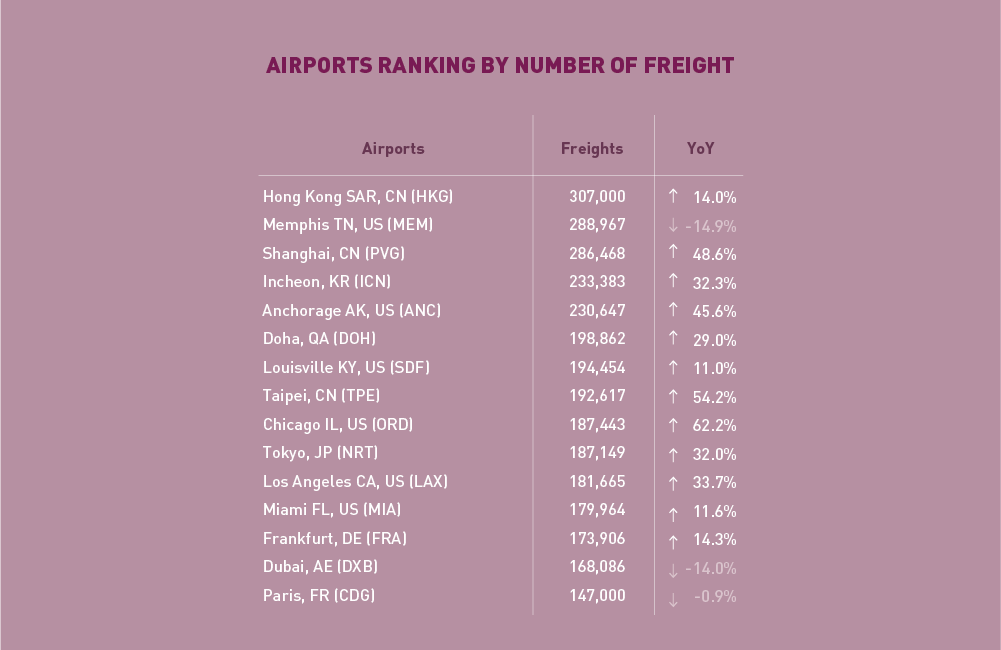 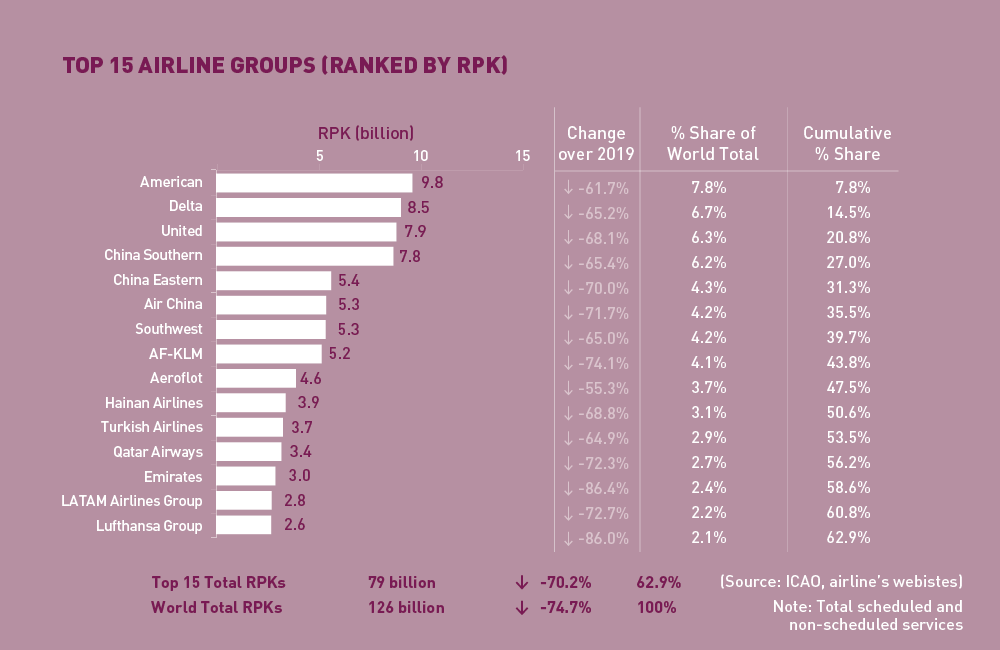 In terms of RPK, the Top 15 airline groups accounted for 62.9% of the world’s total RPK in February 2021 and declined by –70.2% compared to 2019. This decline was 4.5 percentage points smaller than the fall in world’s average RPK, with all airlines in the Top 15 posting contractions.

February marked another month of deterioration in both international and domestic traffic. All airlines in the Top 15 recorded smaller RPKs compared to January, especially the Chinese airlines, due to the abrupt fall in domestic traffic.

For the second consecutive month, the three major US airlines maintained the Top 3 positions. American ranked 1st, followed by Delta and United. Southwest improved one position to 7th. In average, all the US airlines in the Top 15 have recovered to around 35% of 2019 traffic levels.

The Chinese airlines in the Top 15, China Southern, China Eastern, Air China, and Hainan Airlines, posted sharp declines in traffic, driven by the limited travel during the Chinese New Year period. Compared to January, the Chinese airlines recorded 16-25% lower traffic. While the former three kept the same positions, the latter dropped one position to 10th.

Airlines in Europe further trended downward. AF-KLM went down to 8th, while Aeroflot and Turkish Airlines climbed up to 9th and 11th. Lufthansa ranked 15th and recorded the second-largest fall.

Both Emirates and LATAM posted deeper decline and ranked 13th and 14th, respectively. 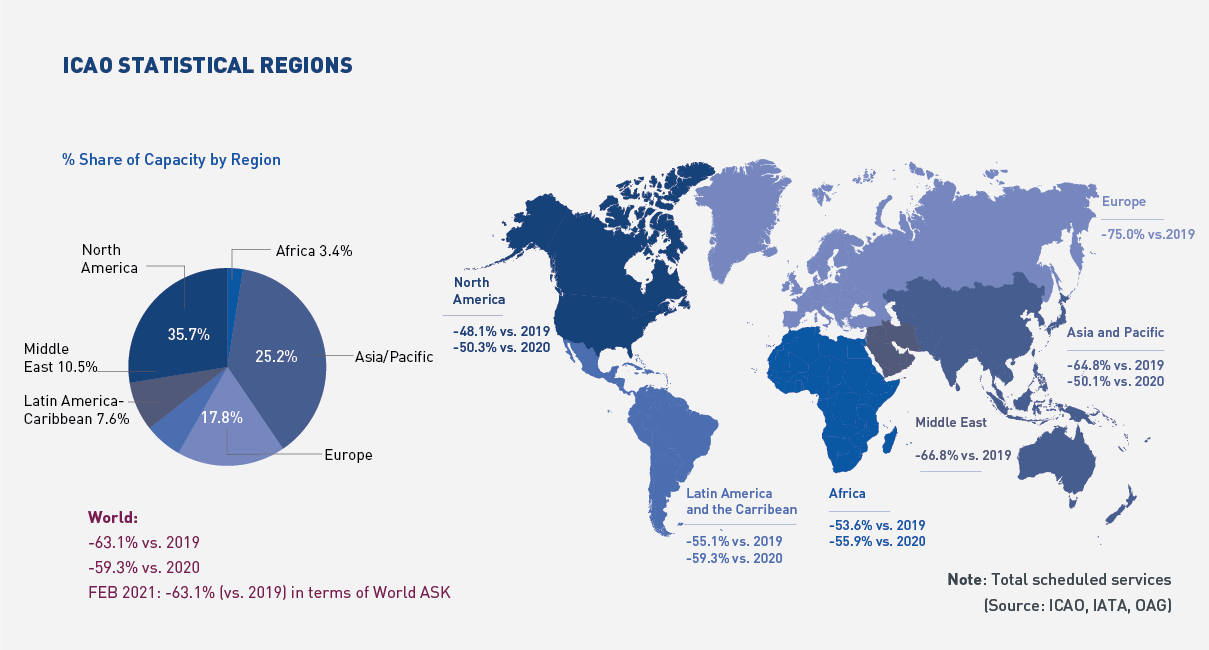 Worldwide capacity contracted by -63.1% in February 2021, compared to 2019. Capacity offered in all regions was reduced, except for small increases in North America and Africa where travel restrictions eased slightly.

Europe continued to see the largest capacity decrease, followed by Asia/Pacific, mainly attributed to the fall in domestic China.