The Sixth meeting of the ATC (Air Transport Services) Inter-facility Data Communication Task Force (APA TF/6) was held from 14 to 16 July 2020 by teleconference.  The meeting was informed that AIDC implementation in South China Sea sub-region had been satisfactory while further efforts by States in the Bay of Bengal sub-region are required.  The summary of the new AIDC connections that have been implemented since the APA TF/5 meeting are listed below:

The meeting noted that the new ATM Automation System in Bangkok was put into operation by Thailand on 12 February 2020. The meeting congratulated the Philippines and Thailand for successful implementation of a number of new AIDC connections with their counterparts using their new ATM system.  The meeting encouraged States/Administrations concerned to continue work bilaterally to expedite implementation of those planned AIDC connections as priorities identified by APANPIRG.

The graphical map for quick and easy understanding of the regional AIDC implementation status initiated by CAA. Singapore and updated by the meeting is shown below. 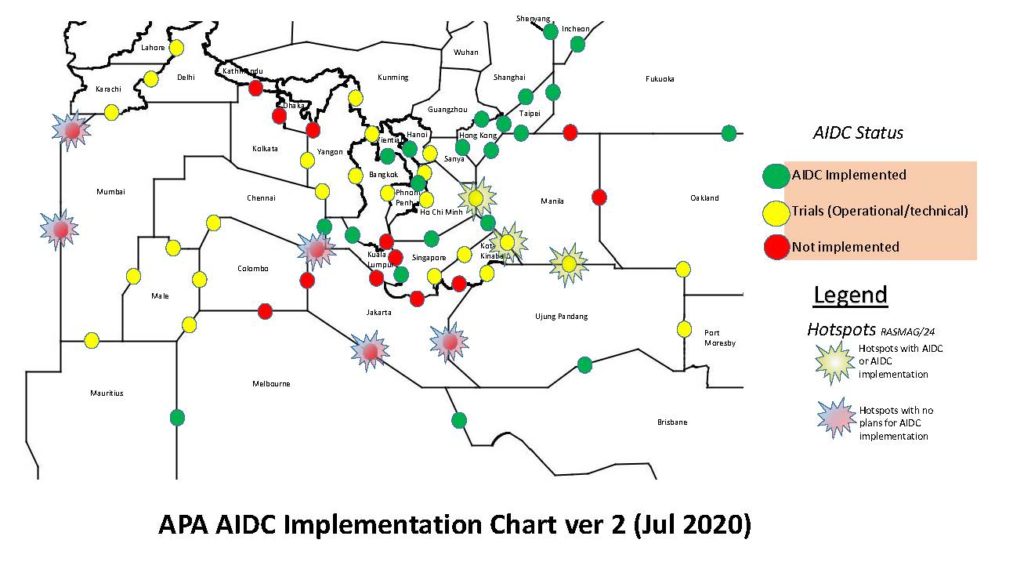 The latest AIDC issues were presented by Indonesia with supported by India and Singapore. Totally 89 issues were consolidated. The meeting considered that the issue table would continue to serve as a reference for other States. A summary of the identified issues is shown in the table below:

The meeting encouraged States/Administrations to provide the identified issues with recommended solutions to Indonesia for consolidation into the issues form.

There are also a number of AIDC connections planned for implementations in 4Q2020 or early 2021. Noting the achievements made in completion of tasks specified in the TOR and the discussions at CNS SG/23 meeting, the APA TF/6 meeting considered it necessary to continue the work of the Task Force for a short period of time. The meeting agreed to have another meeting in the first half of 2021 to review the implementation status of those AIDC connections planned for completion by the end of 2020 and/or early 2021.