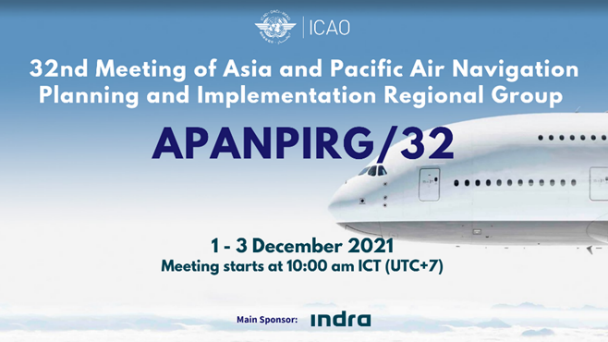 The Asia/Pacific Air Navigation Planning and Implementation Regional Group (APANPIRG) was established by the ICAO Council in 1991 with membership open to all ICAO Contracting States that provide services in the region and are part of the region’s Air Navigation Plan. User States are entitled to participate in APANPIRG Meetings as a non-member with International Organisations recognized by the Council may be invited as necessary to attend APANPIRG meetings as observers.

The Thirty-second Meeting of the Asia/Pacific Air Navigation Planning and Implementation Regional Group (APANPIRG/32) was held as a video teleconference on 1 – 3 December 2021. The meeting was attended by 277 participants from 28 Member States, two Special Administrative Regions of China and eight International Organizations (AAPA, ACI, CANSO, IATA, ICAO, IFALPA, IFATCA and PASO). The Meeting was chaired by Mr. Kevin Shum, Deputy Secretary (Strategy, Sustainability & Technology) Ministry of Transport of Singapore. Indra contributed as sponsor to the APANPIRG/32 Meeting.

The meeting with a great interest reviewed the status of the progress achieved by States in terms of Beijing Declaration Commitments in the field of Air Navigation Services for the APAC Region using data from January 2018 to October 2021. During the meeting appreciation was expressed for the work performed and achievements made by APANPIRG’s sub-groups during 2021 despite the many difficulties encountered due to COVID-19 pandemic. The meeting closed 16 APANPIRG air navigation deficiencies that had been rectified by States in ATM and Airspace Safety and AOP fields. The APANPIRG/32 adopted 10 Conclusions and 4 Decisions on Six Agenda Items.  The full report of the APANPIRG/32 meeting can be accessed here.