The connectivity provided by commercial aviation is a tremendous force for good, helping to power the global economy while at the same time delivering huge social and cultural benefits.   In 2019, over 4.7 billion passengers will fly safely on over 20,000 city-pairs. Affordable, fast and efficient – aviation truly is the business of freedom – but speed and efficiency also make aviation attractive to those who want to deny the freedom of others through the crime of human trafficking.

According to the United States (US) State Department, Human trafficking is the world’s second-largest and fastest-growing criminal activity. The International Labour Organization estimates that 25 million people are in forced labour alone. Because statistics are difficult to come by, no one knows for sure the extent to which aviation is misused by human traffickers. However, in one study done by the United Nations Office on Drugs (UNODC), around two-thirds of trafficked persons had passed across at least one international border,  they are likely flying on aircraft and through airports at this moment. Victims are effectively hidden in plain sight, though there are trainable behavioural analysis techniques that can point to suspected trafficking.

Governments and their law enforcement agencies are increasingly recognizing that tackling this crime is not something that they can do alone. They are requesting transportation companies, including airlines and airports, to assist. The theory is that by training customer-facing staff to spot the signs of potential trafficking, and knowing how to report suspicious behaviours to law enforcement (who can determine the response), employees can be an additional set of eyes and ears in the fight against human trafficking.

The industry has risen to this challenge. In June 2018, IATA passed a resolution at its AGM which committed the airline industry to specific actions to help governments and law enforcement. This includes the #eyesopen campaign which involves developing awareness and guidance materials, as well as practical tools such as free e-learning modules that can help member airlines get involved in the fight, irrespective of the size or jurisdiction in which they are based.

The good news is that many airlines have already launched training and other anti-trafficking initiatives, or are in the process of doing so.  ICAO, in association with the United Nations Office of the High Commissioner on Human Rights (UNOHCHR), has also produced excellent guidance in the form of Circular 352 (Guidelines for Training Cabin Crew on Identifying and Responding to Trafficking in Persons), and Airport Council International (ACI) has also launched a campaign to address human trafficking. 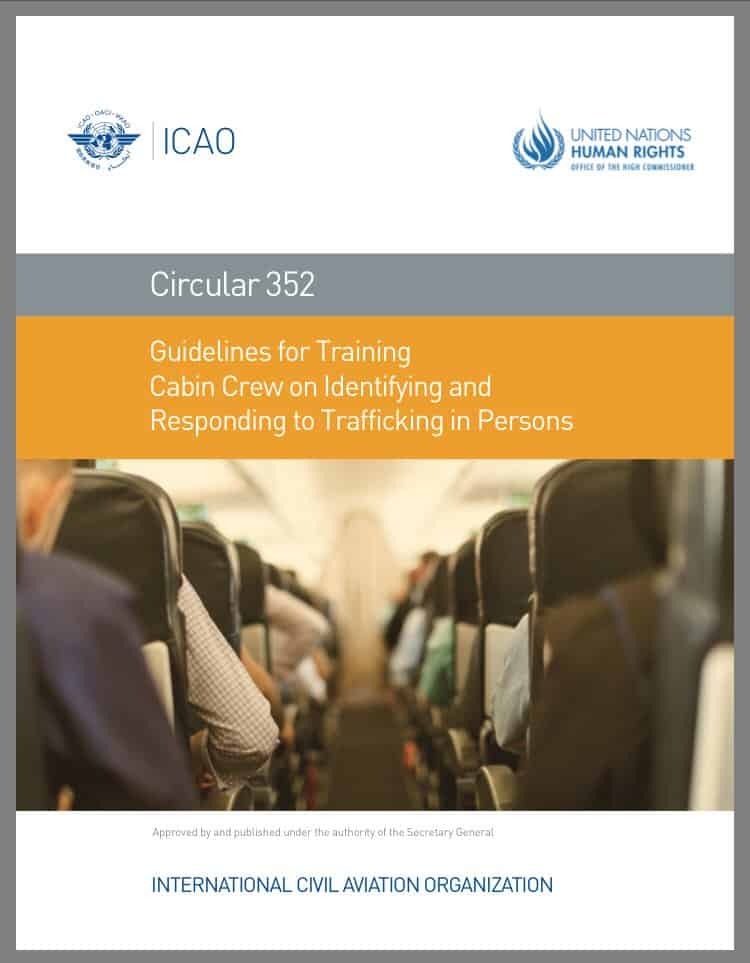 The role of passenger data and biometrics

While identifying potential behaviours that may point to trafficking situations during air travel is critical, it is only part of the solution. Arguably, behavioural analysis should be a secondary defence. Data, in particular, biometric data, has the potential to tackle organized criminal activity including human trafficking, just as it is used against terrorism.  So, what are the opportunities? Are there projects underway? And which, if any, blockers exist to use data to tackle trafficking?

If you’ve got it…use it

It is worth considering that airlines already provide governments with a huge amount of data in the form of advance passenger information (API) and passenger name records (PNR). At the time of writing no less than 76 countries request API data while 30 of them have asked to receive PNR. Providing this requires airlines to invest in IT system upgrades to capture and communicate this data. It is a legitimate request from the airline industry for governments to ensure they are making maximum use of this data to support intelligence, not only to prevent terrorist acts, but to also tackle serious organized crimes such as human trafficking.

For example, PNR data can help to identify suspicious travel patterns or to identify connections between individuals travelling on different routes through a common airport. Interpol offers access to about 17 databases of registered criminals, stolen passports, weapons, etc. that must be fully exploited. Governments are clear on the fact that API and PNR is critical to their efforts to deal with criminality, and the adoption of UN security council resolutions 2178 (2014) and 2396 (2017) requesting States to collect and use API, PNR and biometric data to fight terrorism is a concrete step forward. So, the message to governments is clear – if you’ve got it use it.

Another aspect of human trafficking is that victims may be traveling on forged documents. Criminal networks look to exploit weaknesses in migration and border management systems, particularly through identity fraud and fraudulent travel documents. Identity verification and authentication is a key element of managing the legitimate movement of people across borders, and biometric technology is an enabler. For example, in October 2015, the US Customs and Border Protection (CBP) announced that facial recognition technology detected three imposters in just 40 days at Washington Dulles Airport.

However, domestic systems have limitations. Cross-border solutions are important since the information available to a state domestically may not be enough to identify an individual or verify their identity. National verification processes would be boosted if countries could exchange biometric information and use resources and biometric datasets in other States. Of course, this needs to be done consistent with international and national obligations and laws, including personal data privacy.

But it’s not all about state-led initiatives. There are already industry projects underway that aim to make use of biometric data that governments and law enforcement could use to help tackle organized crime and better secure their borders. 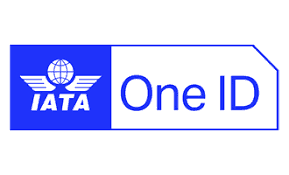 One ID introduces an opportunity for the passenger to further streamline their journey with a document-free process based on identity management and biometric recognition. Passengers will be able to identify themselves at each airport touchpoint through simple biometric recognition. The objective is to achieve a truly interoperable system coordination between airports, airlines and governments.

With passenger volumes expected to double by 2037, IATA’s One ID project was born out of a desire to primarily enhance the passenger experience and tackle infrastructure constraints. Individual stakeholders, such as airlines, border control, customs and screening authorities, have designed their processes around their own obligations and requirements, with little or no coordination between them. This has resulted in repetitive processes for the passenger, such as having to present travel tokens (boarding passes, passports, etc.) to many different stakeholders for different purposes across the end-to-end passenger experience. This is inefficient and not sustainable in the long-term.  One ID breaks this siloed approach and offers governments a means to improve security and border management. Enhancing and integrating identity management will help governments combat human trafficking and other cross-border criminal activities by reducing the possibility for individuals to cross borders under a false identity.

One ID provides an opportunity for the passenger to streamline their journey with a document-free process based on identity management and biometric recognition. The basic premise is that by creating a trust framework between airport ecosystems to form a foundation for a dependable digital identity, including biometrics can be shared between public and private stakeholders across borders on a need-to-know and allowed-to-know basis.  Passengers are able to identify themselves at each airport touchpoint through simple biometric recognition. The objective is to achieve a truly interoperable system coordinated between airports, airlines and governments.

There are huge challenges to delivering the One ID vision. Stakeholders have to trust the digital identity provided by others, and in this respect, the work undertaken by the ICAO DTC (Digital Travel Credential) on defining the specifications for a digital identity becomes a game-changer. There is the issue of adherence to privacy laws in each country and international obligations including for the use of biometric data. These are some of the hurdles to address, but they can be overcome with a spirit of cooperation between governments and industry stakeholders – and the upsides could be massive.

The thorny issue of cross border data exchange is a key challenge for One ID. There are examples of how legal and privacy issues can be resolved. In 2015, the Bali Process on People Smuggling, Trafficking in Persons and Related Transnational Crimes (Bali Process), which has 48 Member States, developed a policy framework for Regional Biometric Data Exchange Solution. This inclusive, non-binding and voluntary framework aligns with international obligations and domestic law. It underlines that the timely exchange of biometric information is critical to combatting people smuggling, human trafficking and other transnational crimes. It is now up to States to utilize the framework. Technology may also offer an opportunity to embed privacy into governments, airlines and airports systems’ design.  Where there is a will there is a way.

A holistic approach is needed to tackle human trafficking. Behavioural analysis is an important component, and the airline industry is committed to supporting governments and law enforcement in this regard. However, making more effective use of existing API and PNR data and deploying biometric data as envisaged by concepts such as One ID will deliver changes in tackling human trafficking and enhanced border security. Of course, there are complex technological and legal challenges that need to be overcome. But overcome them we must. After all, aviation can represent the last opportunity to identify potential victims of human trafficking before they are lost to a life of exploitation and abuse. 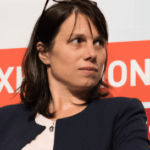 Celine Canu is the Head of Facilitation for the International Air Transport Association (IATA) in Montreal. In this role she is responsible for leading and coordinating IATA’s strategy and activities on aviation facilitation including border control, passenger data and identity management. She leads the IATA facilitation working group, a key forum where airlines, airports and governments representatives work together in shaping joined positions. 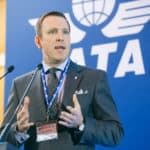 Tim Colehan is the Assistant Director of Member and External Relations for IATA based in Geneva, Switzerland. He is responsible for policy analysis and development as well as working with airline members, regional airline associations and others to articulate and advocate the industry positions to governments and regulators.  As part of his role, he leads IATA’s work on dealing with the issue of unruly passengers and human trafficking.