In her address to the ICAO Regional Aviation Security Conference, generously hosted in Bangkok this year by the Government of Thailand, Dr. Liu stressed that ICAO’s new GASeP sets out key priorities where ICAO, States, and other agencies should now focus their urgent attention.

“The GASeP includes an ambitious framework for enhancing international aviation security over the coming years, and through the 32 actions and 94 tasks identified in its Roadmap, the aviation security community will now be much better prepared and more effectively aligned with Security Council Resolution 2309,” she underscored. “And while aggressive in some respects, these targets and dates are also fully achievable with dedicated effort.”

The main outcome ICAO was seeking at the Bangkok conference was the fine-tuning of a Regional GASeP Roadmap specific to the Asia and Pacific Region. Secretary General Liu praised the related commitments which were ultimately realized, and noted that they were a critical first step which ICAO expected to be emulated worldwide.

She also noted that the new GASeP Roadmap would entail some important and fairly significant work ahead for a number of Asia and Pacific States, and called on them “to be open to accepting assistance to enhance their local effective implementation, whether it involves training, technology, or mentoring, as well as to ensuring that any solutions set out are fully sustainable.”

Highlighting ICAO’s Regional Aviation Security Coordination Forums, and the Asia and Pacific’s Cooperative Aviation Security Programme, Dr. Liu reiterated that ICAO will continue to help coordinate assistance and capacity building activities between donor and partner States, and organizations and recipient States, consistent with its ongoing No Country Left Behind initiative.

She also stressed that human resources development would be fundamental to how sustainably Asia and Pacific States would be able to meet their new obligations under the GASeP, remarking that “within the APAC Region in particular, States will need to ensure that they have available, and can retain, sufficient numbers of trained, experienced and professional regulatory and operational aviation security professionals.”

“It will only be by virtue of sustained political will, especially at the highest levels of government and industry, that the Global Aviation Security Plan will succeed in its ambitious mandate,” she concluded.

The Bangkok conference was officially opened by His Excellency Prayut Chan-ocha, Prime Minster of Thailand. He expressed his country’s thanks to Dr. Liu for ICAO’s leadership in aviation safety and security, while commending the expanded role now being played by ICAO’s Bangkok Regional Office in Asia and Pacific aviation affairs. 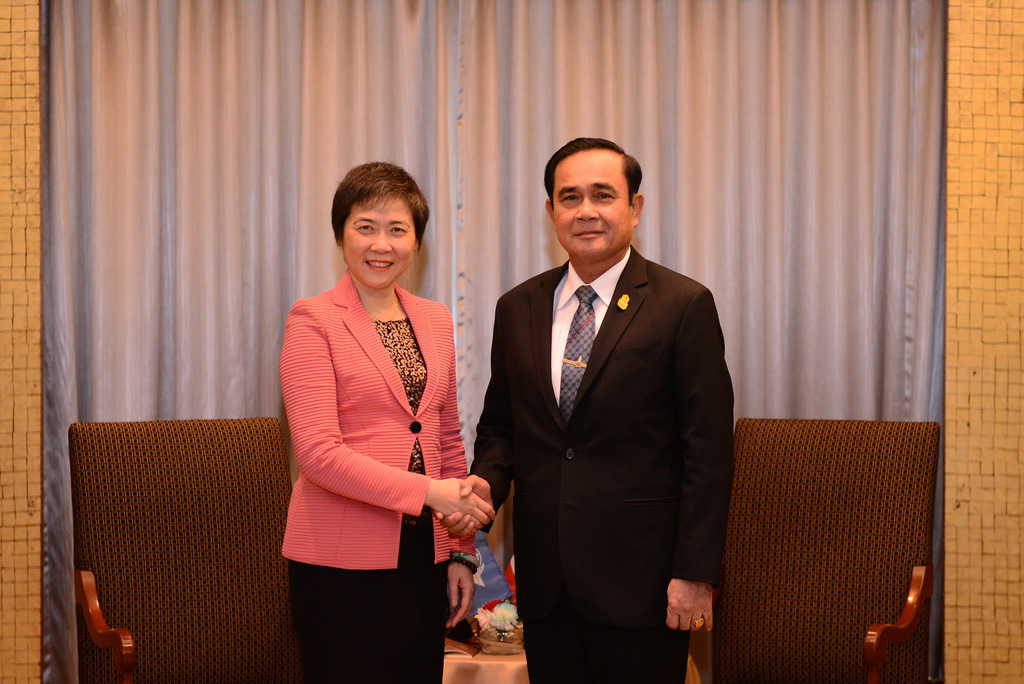 In further discussions with His Excellency Prime Minister Chan-ocha and the Minister of Transport of Thailand, His Excellency Arkhom Termpittayapaisith, Secretary General Liu commended the successful efforts made by Thailand under the leadership of the Prime Minister to resolve their Significant Safety Concerns (SSC).

Dr. Liu emphasized the critical importance of increased investment more generally in aviation infrastructure and human resource development, so that the Thai government could optimize its global aviation connections to the benefit of local citizens and producers. She also stressed in this regard that Thailand should begin integrating its aviation development objectives into its National Economic Development Masterplan.

Dr. Liu further highlighted the importance of developing world class training organizations in order to develop high quality next generation aviation professionals – not only for Thailand – but for the entire Asia and Pacific Region. ICAO is committed to providing the necessary support to Thailand on this initiative.

The Prime Minister of Thailand thanked the Secretary General and the ICAO Bangkok team for supporting the State as it resolved its Significant Safety Concern (SSC) earlier this year, and expressed the full commitment of Thailand in supporting and furthering the strategic objectives and policies of ICAO.

The Conference was attended by 150 delegates representing 23 Member States and 6 International Organizations.