At the Fifth Meeting of Directors General of Civil Aviation for the ICAO Middle East Region (DGCA-MID/5) in Kuwait City, ICAO Secretary General Dr. Fang Liu underscored that the continued enhancement of the implementation of ICAO’s safety, security, and sustainability standards and recommended practices (SARPs), strategies, and other initiatives, is unlocking tremendous economic and other sustainable development benefits in the region.

Her keynote address echoed ICAO’s advocacy for the benefits of aviation in terms of the achievement of the UN’s 2030 Agenda for Sustainable Development. ICAO promotes awareness, including at the level of State leadership, of the various ways by which the international connectivity established through civil aviation directly support 15 of the 17 Sustainable Development Goals (SDGs) under Agenda 2030.

“The ICAO Middle East Region has been one of the fastest-growing in the world for passenger and cargo traffic since 2011,” Dr Liu declared, noting that regional air carriers are recording 4-5% growth rates for passenger and freight traffic and that a 10% increase in tourist arrivals by air occurred in 2018. “Aviation presently supports more than 2.4 million jobs and contributes USD 130 billion to GDP in MID Region GDP. Each of your States has the primary responsibility to ensure that sufficient infrastructure, human resources, training, and other capacities are in place to accommodate and manage forecast traffic growth.”

This will involve ensuring that local and national aviation planning is aligned with SARPs and structured on the basis of the targets and frameworks established in ICAO’s Global Plans for Aviation Safety (GASP), Air Navigation Capacity and Efficiency (GANP), and Aviation Security (GASeP).

The ICAO Middle East Region has been one of the fastest-growing in the world for passenger and cargo traffic since 2011...I commend the MID on the aviation safety performance being achieved, even as traffic figures continue to rise...

On this point, the Secretary-General reviewed several areas where Middle Eastern (MID) States have been especially successful, highlighting safety in particular. “I commend the MID on the aviation safety performance being achieved, even as traffic figures continue to rise. The MID Accident rate of 2.3 accidents per million departures is better than the Global Rate and the regional effective implementation of SARPs has increased from 70.5 to 75.23 per cent—a significant improvement compared to other regions.”

This achievement is illustrated by ICAO safety oversight auditing, which has revealed no significant safety concerns in the region, and is a result of these States’ unwavering prioritization of safety. “I commend the spirit of cooperation and respect for safety prioritization exemplified by the rapid addressing of several air traffic management (ATM) operational challenges through the MID Contingency Coordination Teams (CCTs) and ATM Contingency Plan,” Dr. Liu said.

She added that this good level of cooperation among States in the region has positioned them well in terms of implementing the outcomes of ICAO’s recent 40th Assembly of Member States (A40), drawing the Director-Generals attention to resolutions in the area of not just safety, which included the setting of a zero-accidents by 2030 target, but also security, environmental sustainability, economic development, and the GANP. Key to undertaking these will be continued cooperation and capacity building through ICAO’s No Country Left Behind (NCLB) initiative.

“It has been greatly encouraging to take note of how closely your States have been working with the ICAO MID Regional Office under No Country Left Behind, ensuring that the significant growth you’re experiencing is supported by effective assistance activities,” Dr. Liu said. “In this regard, I would like to congratulate both MID States and the ICAO MID Regional Director Mr. Mohammed Rahma, and his team, on the development and implementation of the MID Region NCLB Strategy. I must also underscore ICAO’s deep appreciation for the financial contributions we’ve received from MID States which play such an important role in helping to elevate overall regional compliance.”

As it is a strategic keystone for aviation development in the region, the production of an updated version of the MID NCLB strategy was agreed by the States participating in DGCA-MID/5. 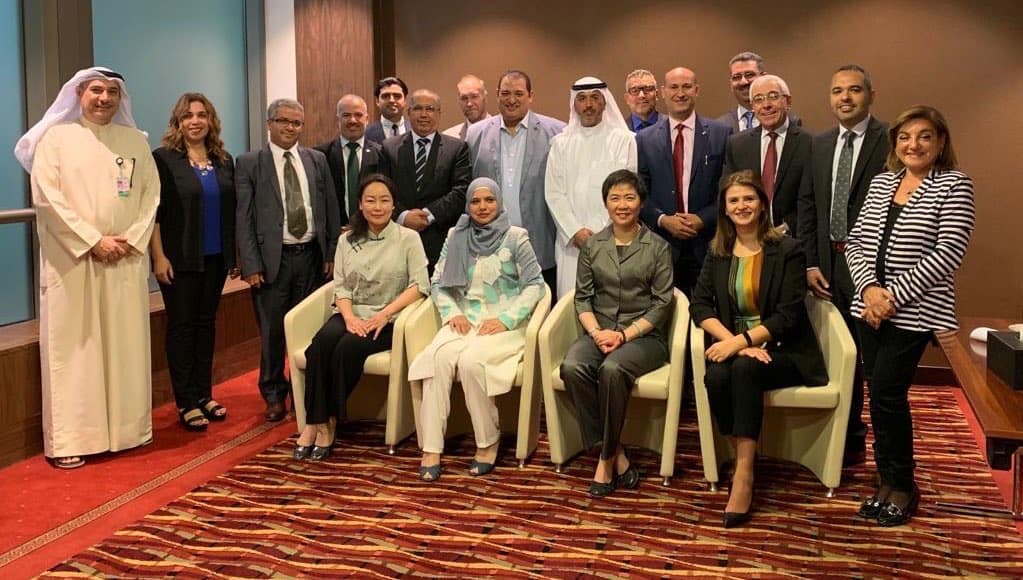 During her visit to Kuwait, Dr. Liu had a bilateral meeting with His Highness the Prime Minister of Kuwait Sheikh Jaber Al-Mubarak Al-Hamad Al-Sabah at Bayan Palace after the Secretary General had in-depth meetings with the President of the General Directorate of Kuwait Civil Aviation Sheikh Salman Al-Humoud Al-Sabah. Mr. Mohamed Khalifa Rahma, the ICAO Middle East Regional Director also attended the meetings.

The Secretary General congratulated Kuwait on its aviation development as well as its contributions to the ICAO 40th Assembly and discussed various proposals on the enhancement of cooperation between ICAO and Kuwait. His Highness agreed that aviation is an integral part of the Kuwait national development plan and underscored the importance of striking the right balance between aviation security and facilitation of passenger movements at airports.

The Secretary General visited the new Terminal 2 at Kuwait, which will add a capacity of 25 million passengers to the Kuwait International Airport.

This is the ultimate air traffic management publication bundle