From the first fragile biplanes to wide-body jets, from balloons and gliders to the space shuttle, stamps have continued to reflect the amazing interest that people have in vehicles travelling through the sky. As with aviation, stamp collections allow us to explore cultures around the world and to learn from one another, breaking down borders and frontiers to lead to a better understanding between people of all nations.

A Member State since 15 March 1993, Slovakia was the first country to issue a stamp on 4 April 2019. Their stamp (pictured at the top of this article) shows an Italian bomber Caproni Ca.3 that references General Milan Rastislav Štefánik who died in this aircraft 100 years earlier near Bratislava on 4 May 1919 on his return home from Italy to see his family. Štefánik was an important figure in the creation of Czechoslovakia. The date of this stamp’s issue corresponds exactly to the 73th anniversary of the entry into force of the Chicago Convention.

The stamps of two of the States feature international airports in their countries because they are the key interface between the passengers and the aircraft and the location where every flight begins and ends. Airports are a fundamental component of every State’s socio-economic well-being. 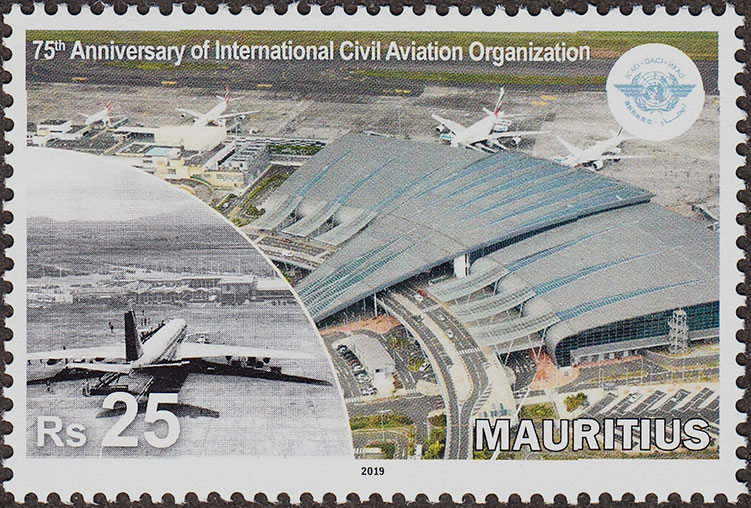 The stamp of Mauritius that was released on 7 December 2019 shows the new passenger terminal at the Sir Seewoosagur Ramgoolam (SSR). The international airport, that was inaugurated on 30 August 2013, has a structure that was designed after the tropical “Traveller’s Palm” (Ravenala madagascariensis), a genus of flowering plants. Previously Mauritius commemorated ICAO’s 50th anniversary with a stamp picturing the control tower at SSR airport. 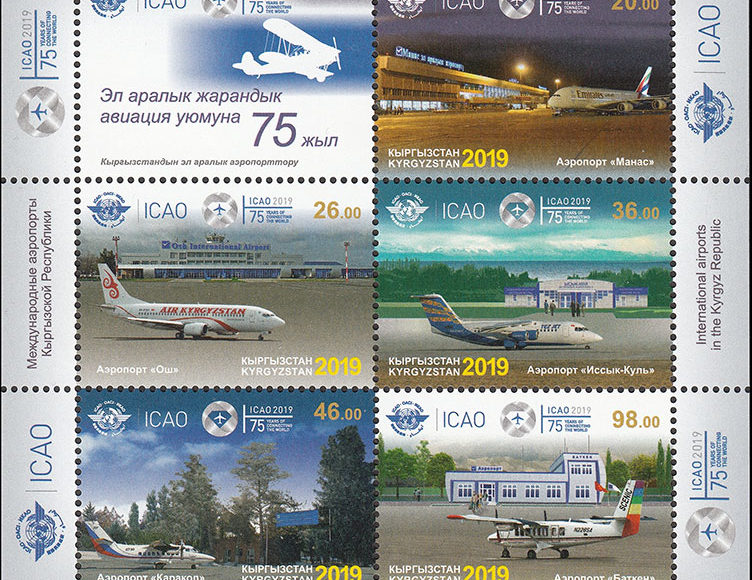 Kyrgyzstan, which became an ICAO Member on 25 February 1993, released their stamp on 13 December 2019. It is a sheetlet with one label and five stamps that feature international airports of the country, from the largest airports Манас (Manas) and Ош (Osh) airports to much smaller airports of Иссык-Куль (Issyk-Kul), Каракол (Karakol) and Баткен (Batken). For each stamp, a different aircraft is stationed in front the airport. The margins of this leaflet are beautifully decorated with the ICAO logo and that of the 75th anniversary. 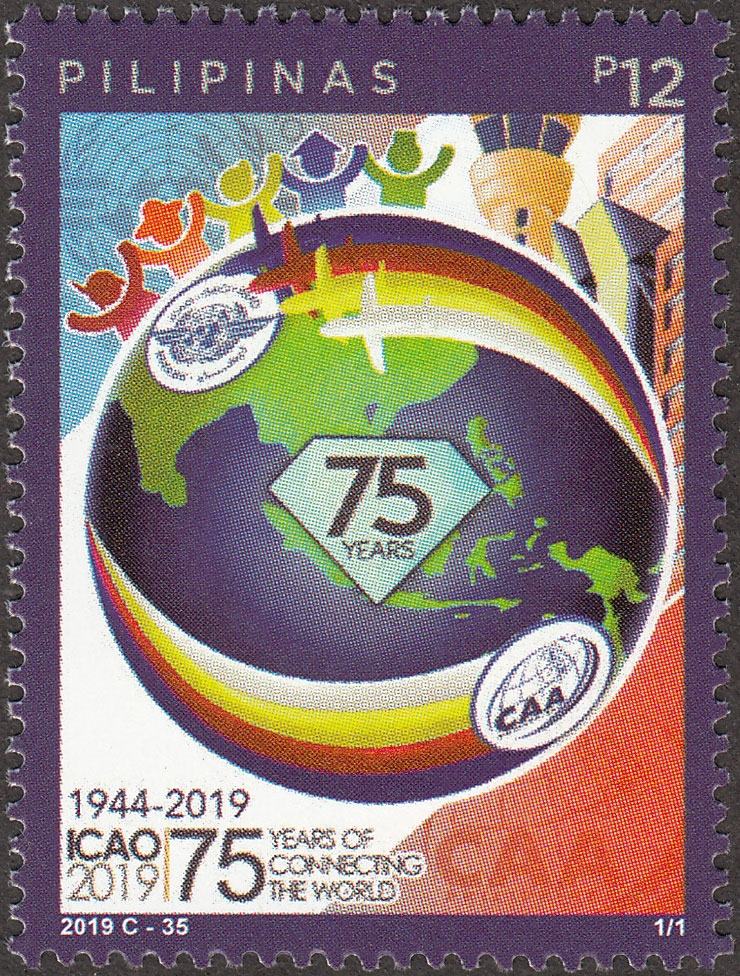 The stamp from the Philippines, released on 7 December 2019, came to be through a design art contest that was open to all Civil Aviation Authority of the Philippines (CAAP) employees. Aside from the ICAO themes, the artwork of the stamp highlights the following features: the technological evolution of aviation in the Philippines and in the world; the readiness of the aviation industry in facing a fast-paced future; the involvement of the different nations in connecting the world through aviation; and the youth’s significance in aviation. In addition to this stamp, Philippines released a souvenir sheet with splendid designs for the foreground and the background. The Philippines previously participated in the commemoration of the 50th and the 65th anniversaries by issuing stamps. 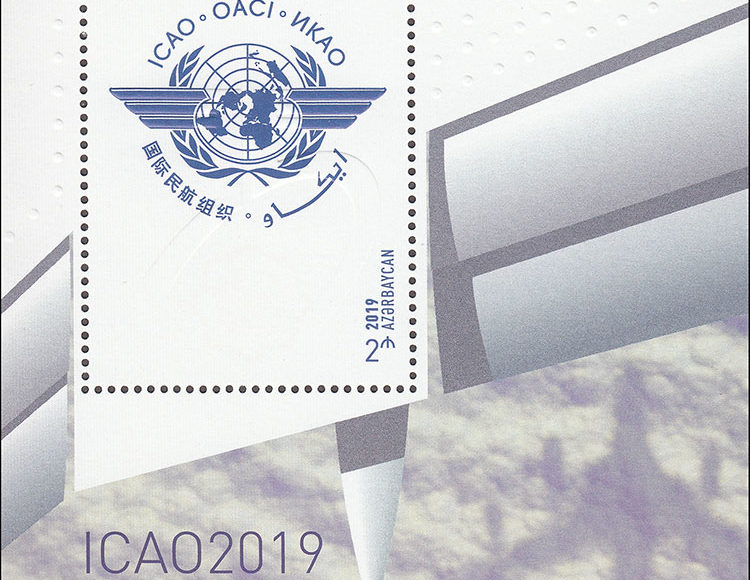 A Member of ICAO since 9 October 1992, Azerbaijan released a miniature sheet on the opening day of the 40th Session of ICAO’s Assembly on 24 September 2019. The sheet depicts an airplane wing against a background of clouds; the wings of ICAO’s emblem are used as the horizontal bars for the embossed 7 and 5 digits. The cachet of the related first-day cover shows the figure 75 surrounding the compressor fins of a jet engine. 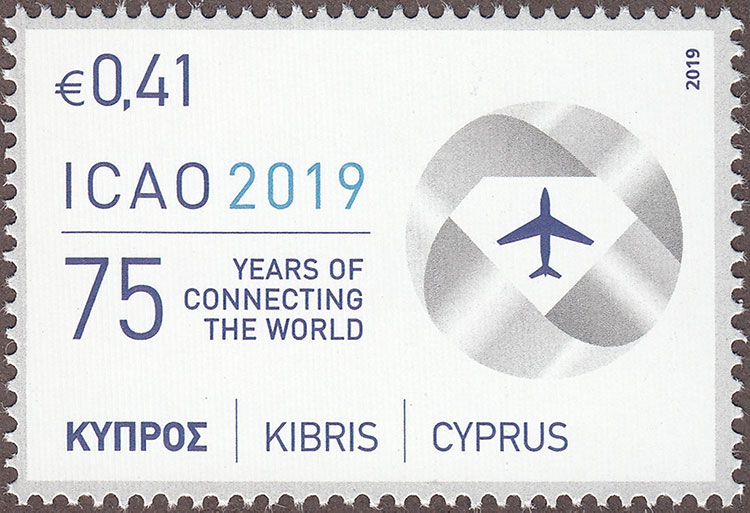 Cyprus commemorated in the past the 30th and 50th anniversaries of ICAO. As per regular practice in past, Cyprus again commemorated several events and anniversaries in one issue released on 10 September 2019. The ICAO stamp of this issue reproduces the special theme of the 75th anniversary on a white background, while the margins of the sheetlet of 8 stamps are nicely adorned with the special emblem of the anniversary. 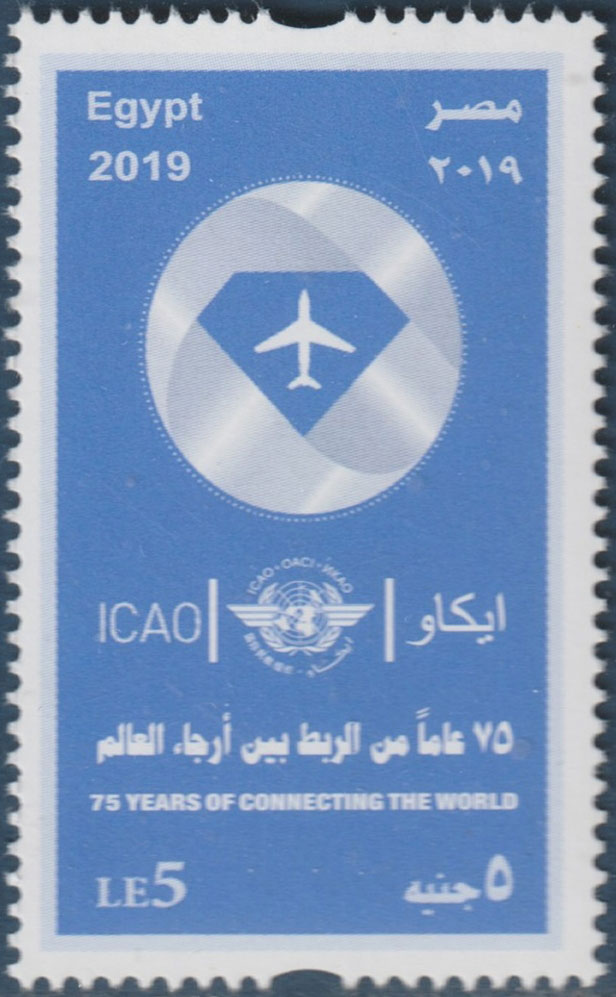 The First Regional Air Navigation Meeting for the Middle East Region was held in October 1946 in Cairo, Egypt. This country took this opportunity to overprint one of its stamps for the commemoration of this meeting; this is the only stamp from the topical collection issued during the lifetime of PICAO, the Provisional International Civil Aviation Organization. The Middle East Regional Office was opened in Cairo, Egypt on 20 January 1947 and now encompasses 15 Member States. Previously Egypt issued ICAO related stamps in 1978 (history of aviation) and in 1994 (ICAO’s 50th anniversary). Egypt released an admirably luminous blue stamp on 7 December 2019 picturing the 75th-anniversary emblem. 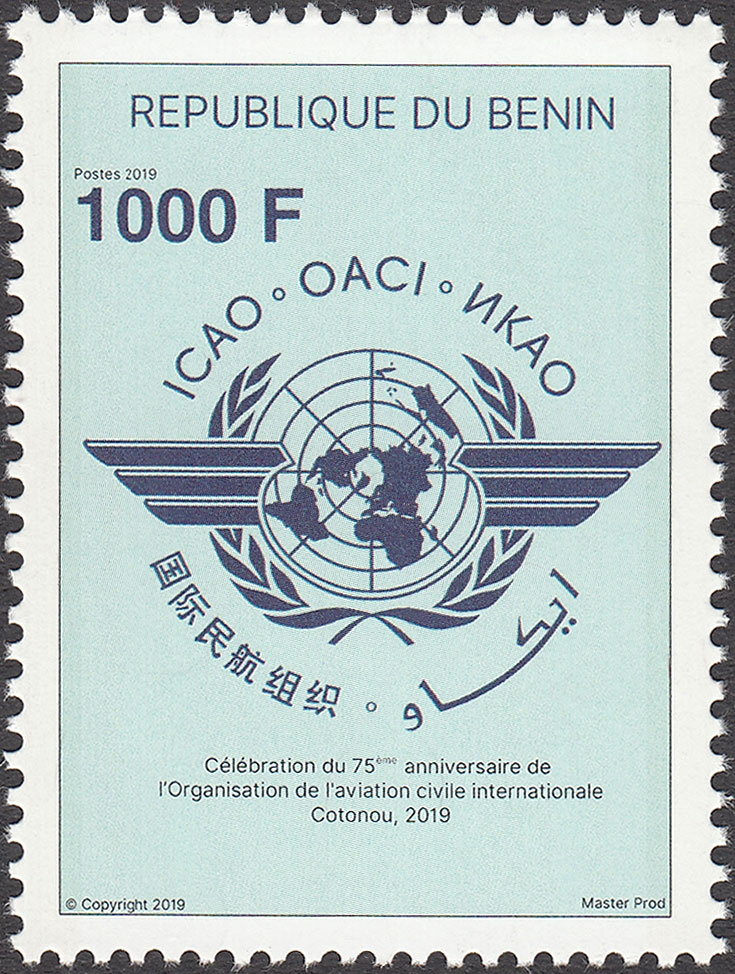 Formerly named Dahomey and today officially named la République du Bénin, Benin was the only country from the African region to release on 7 December 2019 three values of the same stamp showing the ICAO’s logo. On a blue-green background, the texts on the stamps remind us that French is the official language of Benin.