As her second term came to an end, we are shining a spotlight on the 12th Secretary General of ICAO and the first woman to hold this position. Dr. Fang Liu’s six-year journey as Secretary General began in August 2015 when she was appointed to her first three-year term. She was appointed for a consecutive three-year period that ended on 31 July 2021.

Before taking on this role, Dr. Liu served for eight years as Director of ICAO’s Bureau of Administration and Services (ADB). Among her many achievements at ICAO, she was proud to serve as the first woman elected to the position of ICAO Secretary General. She was committed to transforming ICAO into a more efficient United Nations Specialized Agency and advocated to promote the socio-economic benefits of air transport.

Dr. Liu empowered and expanded the role of ICAO’s Regional Offices, so that they could become more active in implementing the Organization’s programmes and activities to better support Member States, with the objective of leaving ‘no country behind’ in terms of effective ICAO compliance. In her six years as Secretary General, she worked hard to strengthen ICAO’s management team and mobilize resources and to establish a comprehensive risk management framework.

As the aviation sector experienced its most severe crisis with the COVID-19 pandemic, Dr. Liu’s acute understanding of aviation’s importance in the recovery facilitated a timely and effective response at the Secretariat level.  There are many examples of Dr. Liu’s leadership, but perhaps one of the best involves her work to promote gender equality and the empowerment of women at ICAO and in the aviation industry.

“It is my honour to strive for greater gender parity and women’s empowerment here in our Organization, across the international civil aviation sector, and throughout the world,” Dr. Liu said.

She made gender equality a personal and urgent priority during her two terms, attaching great importance to gender equality, which remains a persistent challenge in various fields, aviation being no exemption. In a recent interview for ICAO’s Women in Aviation series, Dr. Liu spoke of her experience as a woman in a leadership position. In this conversation, she discussed gender changes and transformations and offered words of encouragement to empower women to reach their professional goals.

“My trajectory as a woman working in the field of aviation has been extremely gratified and yet quite challenging as well,” she mentioned.

Having dedicated her entire career to international aviation service, Dr. Liu witnessed the ways women can break through the glass ceiling and overcome the obstacles placed before them through assertiveness, determination, and hard work. 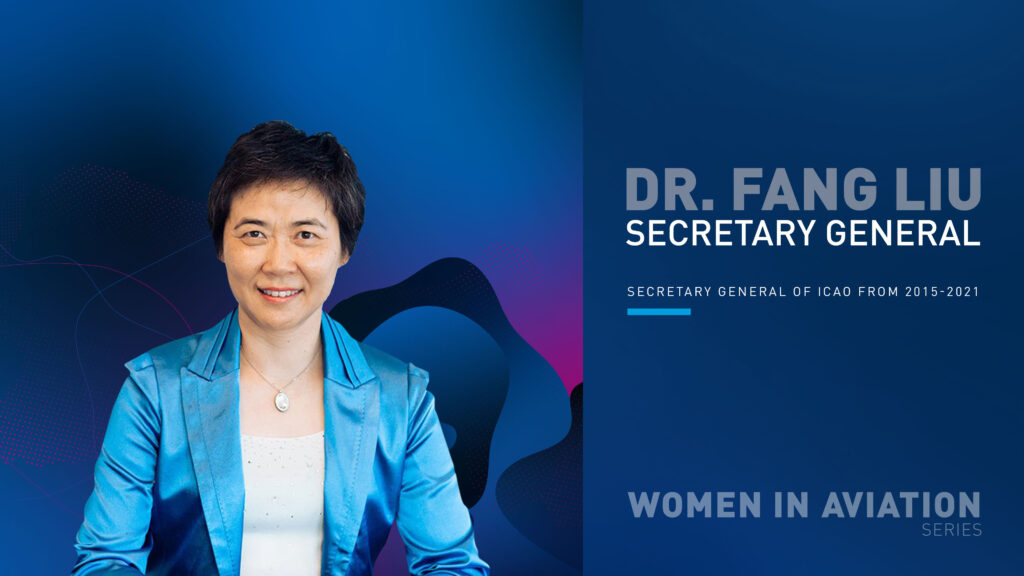 In the interview, she also highlighted the various opportunities the secretariat has seized over the past years to promote gender equality within ICAO and foster an environment that celebrates diversity. Initiatives such as promoting a more diverse workforce, adopting new commitments to improve gender equality within the Organization and establishing the first ICAO Gender Equality Programme, have been put in place.

Dr. Liu hopes to see greater participation among women in technical and decision-making roles in the future. During these uncertain times, she encourages women to look for the opportunities created by the pandemic for learning and developing new skills.

“I’m confident that our industry will re-emerge stronger than ever and continue to offer women some tremendous new opportunities for career development,” she added.