On International Civil Aviation Day: 75 years of connecting the world

December 7th is recognized every year as International Civil Aviation Day (ICAD). The day helps us generate and reinforce worldwide awareness of the importance of international civil aviation to the social and economic development of States, as well as the role of ICAO in helping States to cooperate and realize a truly global rapid transit network at the service of all mankind.

This year’s celebrations are particularly special, since we are commemorating the 75th anniversary of the 1944 Convention on International Civil Aviation. As of this writing, numerous ICAO Member States have committed resources toward various activities that raise public and sectoral awareness on this important milestone in the history of air transport. These have included developing airport and CAA ICAO75 historic exhibits; hoisting the ICAO 75th anniversary flag in uniquely prominent geographic locations; arranging aerial demonstrations, and promoting the ICAO75 video at airports around the world.

Seventy-five years after ICAO’s foundation, the International Civil Aviation network carries over four billion passengers annually. The global air transport sector supports 65.5 million jobs and USD 2.7 trillion in global economic activity, with over 10 million women and men working within the industry to ensure 120,000 flights and 12 million passengers a day are carried safely to their destinations. The wider supply chain, flow-on impacts and jobs in tourism that are made possible by air transport show that at least 65.5 million jobs and 3.6 per cent of global economic activity are supported by the aviation industry according to research by the Air Transport Action Group (ATAG).

The theme for International Civil Aviation Day in 2019 is: “75 Years of Connecting the World”

This theme, that celebrates ICAO’s 75th Anniversary, was selected to help draw attention to the fact that safe, secure and rapid connectivity is the core capability of aviation’s worldwide network, and the key-value offering from which all other international aviation benefits derive – whether commercial, cultural or personal.

ICAO chose to focus the air transport sector’s attention during this historic anniversary much more directly on the future of flight than on its past. This prioritization acknowledged the rapidly expanding capacity of the incredible new aircraft now being conceptualized, designed, and produced to fulfil exciting new services and roles for civil societies. 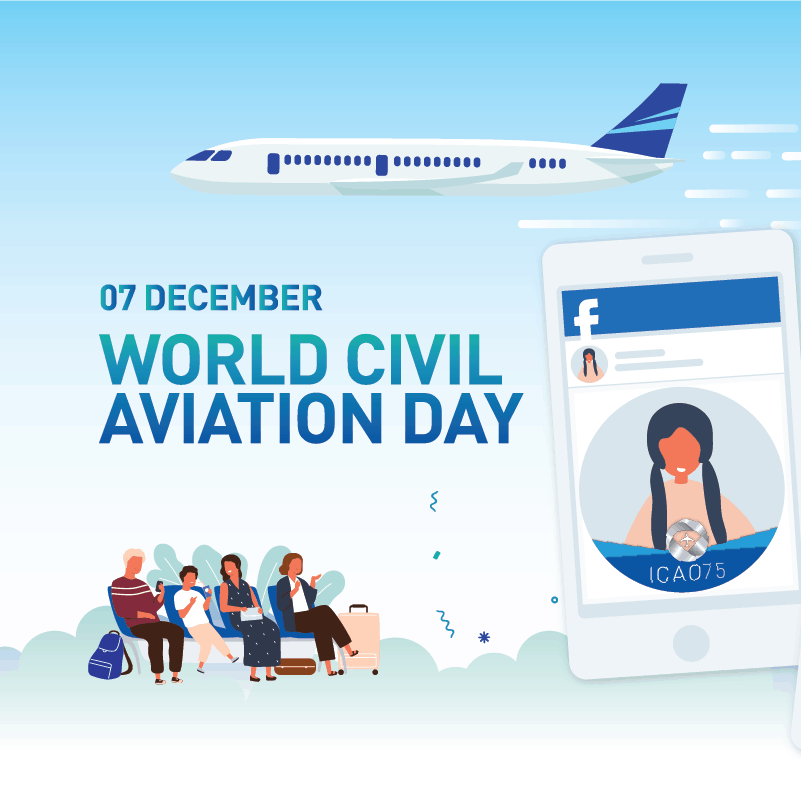 We were extremely grateful to witness how so many ICAO Member States worked to produce tributes and events celebrating aviation in the context of our 75th Anniversary this year, including ICAO’s role in uniting our global community.

Of the thousands of visiting experts and officials who joined us in Montreal at our Headquarters this year, and most notably for our 40th Assembly, many were able to share in the privilege of witnessing some wide-ranging new aviation capabilities at the ICAO Innovation Fair and World Aviation Forum events which were hosted during the Assembly period.

At this year’s World Aviation Forum in particular, government and industry officials explored not only these new potentials in-depth, but also how innovation should now be a guiding priority for civil aviation regulators as well.

The Fifth World Aviation Forum also provided a platform where ICAO was able to announce the global winners of the youth innovation competitions. It was tremendously encouraging to see how engaged young people are today in the exciting future now being realized in powered flight, and to share in the excitement they felt at being acknowledged by the global aviation community through ICAO.

Innovation will be key to how aviation addresses some of its most pressing priorities, today and tomorrow. These challenges include how to keep pace with traffic growth and manage more and more aircraft in a finite operational airspace, as well as how to accommodate steady traffic growth while continuously limiting and ultimately decreasing sectoral emissions.

But as we grow more excited and enthusiastic together with each new aircraft and operational capability which moves from the drawing board to our skies, let us not forget as well that aviation safety, security, and efficiency remain our most fundamental value offerings in international civil aviation, providing a core foundation which connects the world.

It is therefore of paramount importance that we realize together an effective and balanced approach to new aviation innovations, accelerating regulatory processes while safeguarding traditional needs relating to regulatory and policy enforcement, consumer protection, and fair and sustainable economic and social development.

It will be by leveraging its historic levels of consensus and cooperation, which have been the hallmark of the accomplishments realized through ICAO over the past 75 years, that the aviation community will realize an even brighter and more sustainable new future for air transport in the exciting years to come.