As the International Civil Aviation Organization prepares to turn 75, we take a look at the Organization’s past and celebrate the prominent figures who shaped and contributed to ICAO’s many achievements as one of the oldest agencies in the United Nations system. This spotlight is on one of the most prominent and respected figures in the world of civil aviation, Dr. Assad Kotaite.

With the longest career among senior officials in the history of the United Nations, Dr. Kotaite’s tenure at ICAO is unparallelled. Not only remarkable for his contributions that spanned a half-century,  but for the critical role he played in promoting air transport as a driver of economic, cultural and sustainable development worldwide.

Early life and career at ICAO

Dr. Kotaite’s prestigious career with ICAO began in 1953 when he was Chief of Legal Services, International Agreements, and External Relations in the Lebanese Directorate of Civil Aviation and a member of the Organization’s Legal Committee. He served as a national representative of Lebanon on the ICAO Council (1956-1962), as Secretary-General of the Organization (1970-1976), and finally, as President of the ICAO Council for over thirty years (1976-2006).

In his time at ICAO, the Organization faced significant challenges ranging from the rapid expansion of membership that resulted in the construction of the current Headquarters building, to the sustained growth of civil aviation and disputes over sovereignty. These and other challenges and achievements are detailed in the biography written by Dr. Kotaite: My Memoirs: 50 Years of International Diplomacy and Conciliation in Aviation.

In his memoirs, Dr. Kotaite noted, “Aviation no doubt illustrates the power of human inventiveness, the irrepressible human impulse to overcome natural obstacles and challenges. But it also demonstrates how the International Civil Aviation Organization, growing from the wartime deliberations of the Chicago Conference, has become a highly relevant and effective Organization promoting peace, cooperation, security and safety in the skies as part of the United Nations.”

Having made international law and multiculturalism his life-long mission, he is considered a champion of international cooperation and dialogue, and an architect of multilateralism. He guided ICAO through challenging times and exemplified a spirit of understanding, cooperation and friendship.

Since the 1950s, civil aviation has gone from a pioneering form of transportation to become one of the world’s leading knowledge-intensive industries, a driver of the world economy, the single most effective way for the world’s peoples to communicate with and get to know one another, and the safest form of mass transportation known to man.

Throughout his career, Dr. Kotaite drew inspiration from the Preamble to the Convention on International Civil Aviation, the legal instrument of modern civil aviation signed in Chicago on December 7, 1944. In his book he describes the preamble as a ‘true Magna Carta’ and the very foundation of international air law as it “establishes certain principles and arrangements in order that international civil aviation may be developed in a safe and orderly manner and that international air transport services may be established on the basis of equality of opportunity and operated soundly and economically.”

Dr. Kotaite often brought the Preamble back into focus, particularly in times of crisis. Most notably, he cited the Preamble in a speech following the 9/11 attacks to condemn the misuse of civil aviation and call upon nations to join forces in eradicating threats to global society. 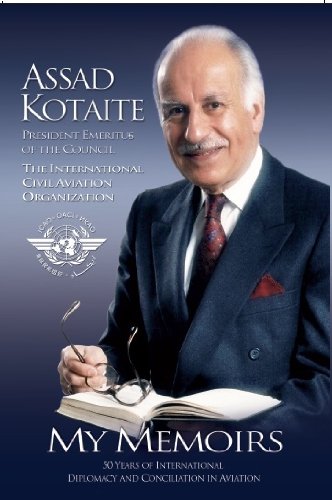 Dr. Assad Kotaite received numerous honours and awards during his long tenure, including the highest honour in the world of civil aviation, the Edward Warner Award, in recognition of his enduring contributions to the safe and orderly development of civil air transport.

Following his retirement on 31 July 2006, Kotaite established the Assad Kotaite Graduate and Postdoctoral Fellowship Fund. This scholarship programme acknowledges the importance of assistance and cooperation in the field of specialized aviation training. All revenues from the sale of My Memoirs go to the fund. The book is available for purchase here.

Dr. Kotaite passed away on 27 February 2014 at the age of 89. Today, on what would have been his 95th birthday, we reflect on his 50 years of dedication to diplomacy and conciliation in aviation that took him 3.4 million kilometers in flights around the world. Dr. Kotaite’s service and contributions to the development of aviation standards and to the goals of technical training, particularly in developing countries, will serve as inspiration for current and future leaders in the field and other areas for years to come.