Aviation and the World’s Cities

On the 31st of October every year World Cities Day is celebrated around the world.  The overall World Cities Day theme is always “Better City, Better Life” which brings a call to action for all of us to rethink how cities may become better places to protect and enhance people’s lives. The sub-theme for the 2019 commemoration draws attention to “Changing the world: innovations and a better life for future generations”,  which is opening discussions on how urbanization can be used to achieve sustainable development. The global observance of this year’s World Cities Day event will be hosted by the City of Ekaterinburg, Russian Federation and is jointly organized by UN-Habitat, the Shanghai People’s Government and the City of Ekaterinburg. UNESCO will also be hosting a Conference on October 31st in Paris.

With over half of the population living in urban areas and the numbers increasing daily, cities are facing unprecedented demographic, environmental, economic, social and spatial challenges. Today’s population is expected to double by the year 2050. Throughout this World Cities Day local, regional and national governments, partners, communities of practice and residents will be engaging to raise awareness about the importance of resilient cities and inspiring action for building resilience for more sustainable cities.  Cities around the world are drivers of change. They bring innovation, industry, technology, entrepreneurship and creativity. ICAO joins the celebration of World Cities Day in support of the importance of steering airports and city planning processes towards synergistic sustainability.

By 2050, 70% of global population will live in cities. 60% of new urban settlements are yet to be built, representing a huge opportunity for building resilient cities. With 54% of the world’s population living in urban areas in 2015 and a projected increase to 66% by 2050, managing cities, as well as ensuring their safe and sustainable growth, is a clear priority.

An important focus point, which is recognized by the New Urban Agenda as a priority platform,  was emphasized in the 2030 Agenda for Sustainable Development specifically under Goal 11: Make cities and human settlements inclusive, safe, resilient and sustainable. The need for providing access to safe, affordable, accessible and sustainable transport systems for all and to enhance inclusive and sustainable urbanization, will lean on aviation as it uniquely connects the world and its peoples, bringing together families, friends, businesses and cultures. The aviation sector contributes greatly to the socio-economic development of urban areas. In fact, the industry directly and indirectly generates 65.5 million direct and indirect jobs worldwide. Air transport also contributes greatly to global economic prosperity and has an annual global economic impact of USD 2.7 trillion to the GDP.

In the more specific case of developing landlocked and small island countries, aviation is crucial to economic growth. Not only does it allow for necessary mobility and interconnectivity between people, but it also supports numerous other industries that rely on air links to operate. Tourism, for example, is an area that greatly depends on flights to function effectively. Moreover, aviation is essential for world trade since it permits the continuous flow of goods and services over borders thus linking international markets. Airports contribute to trade efficiency since they can be used, amongst other things, as warehouses and distribution centers.

Aside from its economic significance, aviation is essential for the provision of vital aid and humanitarian assistance. In times of crisis or following disasters, immediate as well as long term sustained support from the international community, plays a pivotal role in emergency response and recovery. Airports become the crises centers where action is being constantly coordinated. Consequently, whether it is through food and cargo drops in hard to access areas or through victims’ evacuation, air transportation perpetuates the tradition of having No Country Left Behind. 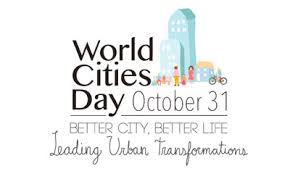 The importance of aviation in the sustainable development of all States is demonstrated every day. What is fundamental is establishing dynamic corridors between airports and urban centers, since metropolitan areas at the social, economic and environmental level partly depends on the axis linking them to airports. The relationship is reciprocal as urban conditions impact on aviation safety, efficiency, security, economic viability and environmental soundness.