The first production Boeing 707 jet-powered commercial airliner, serial number 17586 (Line Number 1), was rolled out at the Boeing aircraft assembly plant at Renton, Washington. The Model 707 was developed from the earlier Model 367–80, the “Dash Eighty,” prototype for an air-refueling tanker which would become the KC-135 Stratotanker.

The new airliner had been sold to Pan American World Airways, the launch customer, as part of an order for twenty 707s in October 1955. The Federal Aviation Agency (FAA) assigned N708PA as its registration mark.

N708PA made its first flight 20 December 1957 and was initially used for flight testing. Once this was completed, the new jet airliner was prepared for commercial service and delivered to Pan American at San Francisco International Airport (SFO), 30 November 1958. It was named Clipper Constitution.

In February 1965, the airliner was upgraded to 707-121B standards, which replaced the original turbojet engines with quieter, more efficient Pratt & Whitney JT3D-1 turbofan engines which produced 17,000 pounds of thrust. The wing inboard leading edges were modified to the design of the Model 720 and there was a longer horizontal tail plane.

Clipper Constitution flew for Pan Am for nearly 8 years, until 17 September 1965, when it crashed into Chances Peak, a 3,002 foot (915 meters) active stratovolcano on the Caribbean island of Montserrat. The point impact was 242 feet (74 meters) below the summit. All aboard, a crew of 9 and 21 passengers, were killed.

The Boeing Model 707-121 was a four-engine jet transport with swept wings and tail surfaces. The leading edge of the wings were swept at a 35° angle. The airliner had a flight crew of four: pilot, co-pilot, navigator and flight engineer. 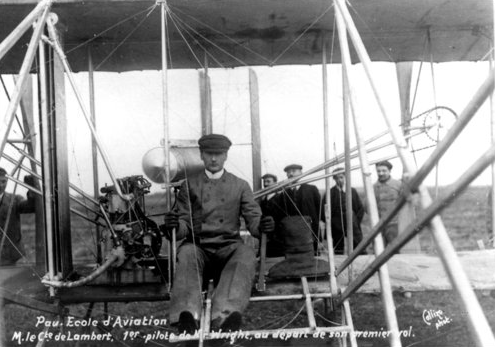 The Comte de Lambert departed Port Aviation at 4:36 p.m. He circled the Tower at an altitude of 400 meters (about 1,300 feet) and then returned to Pau, located on the northern edge of the Pyrenees.

The flight covered approximately 48 kilometers (30 miles) with an elapsed time of 49 minutes, 39 seconds.

The Wright Model A, produced from 1907 to 1909, was the world’s first series production airplane. It was slightly larger and heavier than the Wright Flyer III which had preceded it. It was a two-place, single-engine canard biplane built of a wooden framework braced with wires and covered with muslin fabric. A new system of flight controls allowed the pilot to sit upright rather than lying prone on the lower wing.

The dual horizontal elevators were placed forward and the dual vertical rudders aft. The biplane was 31 feet (9.449 meters) long with a wingspan of 41 feet (12.497 meters). The wings had a chord of 6.6 feet, and vertical separation of 6 feet.

The airplane had an empty weight of approximately 800 pounds (363 kilograms).

The Wright Model A  could fly 37 miles per hour (kilometers per hour). Maurice Clément-Bayard flew the dirigible, Clément-Bayard No. 2, from the Astra Clément-Bayard airship hangar at La Motte-Breuil, France, to Wormwood Scrubs, England, with six passengers. This was the first crossing of the English Channel by airship. The 244 mile (393 kilometer) distance was covered in less than six hours.

The airship had been built for the Armée de Terre (the French Army), but because of the very high price, ₣200,000, it was not accepted. It was then sold to the British War Office for ₤18,000, more than twice the price the builders had offered to the French government. The British newspaper, The Daily Mail, contributed the cost of building an airship hangar.

After arriving in England, Clément-Bayard No. 2 was deflated for transport to another location. The airship was damaged in transit and was never repaired.

Air races were a extremely popular event in the early days of aviation. An estimated 200,000 spectators watched the opening race at the National Air Races, held at Selfridge Field (now, the Selfridge Air National Guard Base) near Mount Clemens, Michigan, from 8 to 14 October. “Lieutenant Koenig varied not more than two miles an hour in any lap from his average speed for the ten laps. The first three laps he made at 130 miles an hour, the next five at 129 miles, the next five at 128 miles and the last lap at 129 miles an hour. On the last leg of his last lap, while he was over Lake St. Clair, his air pressure feed, which forces gasoline to the carburetor from the tanks went wrong and he was compelled to resort to an emergency gas tank for fuel.“

Of the nine racers, six completed the race. Major Follet Bradley placed second in his DH.4B with an average speed of 126.4 miles per hour (203.4 kilometers per hour). Third place went to Lt. William L. Boyd, who also flew a DH-4B. “He flew a perfect race, averaging 122 miles an hour in every one of the ten laps. Army men said this was a remarkable achievement.”

The Lepère Two-Seater Fighter (Packard Lepère LUSAC 11*) was a single-engine, two-place biplane fighter which was designed by the French aeronautical engineer, CapitaineGeorges Lepère, who had previously designed the Section Technique de l’AeronautiqueDorand AR.1 reconnaissance airplane for France’s military air service. The new airplane was built in the United States by the Packard Motor Car Company of Detroit, Michigan. It was a two-place fighter, or chasseur, light bomber, and observation aircraft, and was armed with four machine guns.

The fuselage was a wooden structure with a rectangular cross section. It was covered with three layers of veneer, (2 mahogany, 1 white wood) with a total thickness of 3/32-inch (2.38 millimeters). The fuselage had a maximum width of 2 feet, 10 inches (0.864 meters) and maximum depth of 4 feet, 0 inches (1.219 meters).

The wings were also of wooden construction, with two spruce spars and spruce ribs. Three layers of wood veneer covered the upper surfaces.

The engine coolant radiator was positioned horizontally in the center section of the airplane’s upper wing. Water flowed through the radiator at a rate of 80 gallons (303 liters) per minute.

Koninklijke Luchtvaart Maatschappij N.V., operating under the name KLM Royal Dutch Airlines, was founded on 7 October 1919 by Albert Plesman, making it the oldest carrier in the world still operating under its original name, though the company stopped operating during the Second World War—apart from the operations in the Dutch Antilles in the Caribbean.

As of October 2016, KLM’s fleet included 119 airliners, mostly Boeing aircraft. Another 22 airliners are on order. The airline has approximately 33,000 employees. 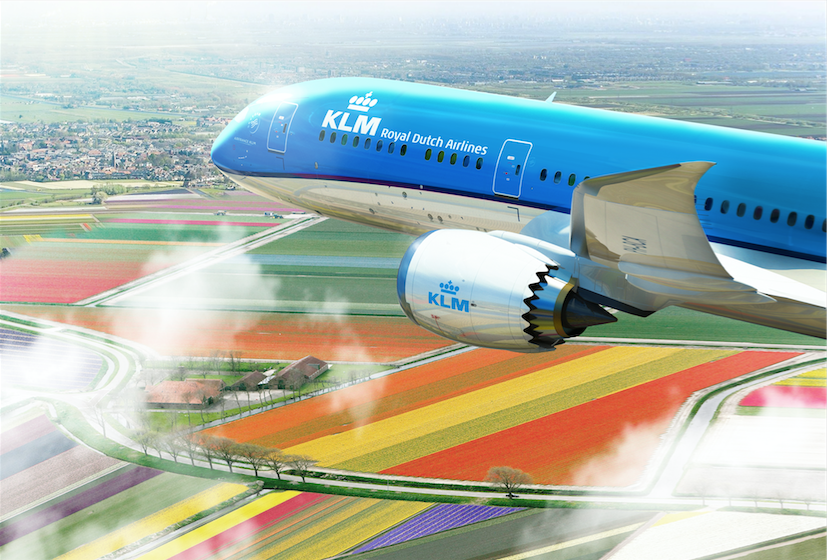 Bryan R. Swopes grew up in Southern California in the 1950s–60s, near the center of America’s aerospace industry. He is a retired commercial helicopter pilot and flight instructor with a life-long interest in aviation and space flight. Bryan will be a regular contributor to Uniting Aviation through his personal blog: https://www.thisdayinaviation.com/