The future empowered with legal identity

In everyday life, we often take our legal identity for granted – be it for banking or business, acquiring assets, accessing facilities, travelling, voting, or, however unpleasant, paying taxes. While there is something about legal identity that gives us a sense of empowerment and liberty, it also connects us to our nations, and their histories and geographies.

In modern times, because legal identity is a national responsibility, it has developed in diverse ways and degrees. Today, only about 17 per cent of people worldwide in about 50 States have well-established legal identities. The bottom 15 per cent constitute over a billion individuals who have minimal or no recognition of their existence. This is not just at odds with basic human rights, it deprives these individuals of essential services like health, education and socio-economic opportunities.

This alarming situation prompted the United Nations to include legal identity among its Sustainable Development Goals to by the year 2030, provide legal identity for all with birth registration (SDG 16.9). Though briefly stated, this goal is significant or the action it urges – for the State to recognize and record each individual from birth.

In 1924, the League of Nations gave itself one hundred years to end statelessness. Though currently, ten million people remain stateless, by 2024, there should be none. This obligation brought together the diverse disciplines and stakeholders who must shape legal identity more comprehensively for the future. But when we survey the landscape – of constitutions and statutes, cultures and beliefs, administrative practices, wars, refugees and human rights, gender inequalities, health and well-being, economics and prosperity, crime and terror – the challenge seems overwhelming and yet too urgent to defer.

Where is legal identity today?

The status of legal identity today, and where it should be, is the subject of intense debate among specializations, a cross-section of which is provided in Figure 1.

Legal identity is nestled among subjects like citizenship, nationalities, residences, voting rights, naturalization, and the right to hold a passport. There is no single-best definition of legal identity. While many States have a national identity document, many depend on proxies, such as a drivers’ license, bank card or passport. Divergence in practices leads to corresponding differences in the administrative processes and business rules and technologies deployed to register individuals, issue documents and certificates, and to manage and maintain records securely and permanently, with strictly authorized access. The systems currently used also vary widely, from local handwritten village records, to advanced, centrally-managed digital identities.

After analyzing the global picture, a general model for the legal identity eco-system has emerged (depicted in Figure 2). Many of the elements, such as birth and residence, are of primary importance, while others are indicative. This also incorporates information on how citizenship can be determined (i.e.: by place of birth or parents’ origins).

In many situations, either the records are not complete, are unavailable or cannot be authenticated. This requires evaluating other indicative records from the individual’s social footprint such as education and employment or utility bills, that can establish or reinforce an individual’s existence and status.

To establish legal identity for all, effort in the coming years will need to be focused on ensuring that all relevant elements are comprehensively addressed, modernized and harmonized, as well as judiciously inter-connected using both biographics and biometrics. 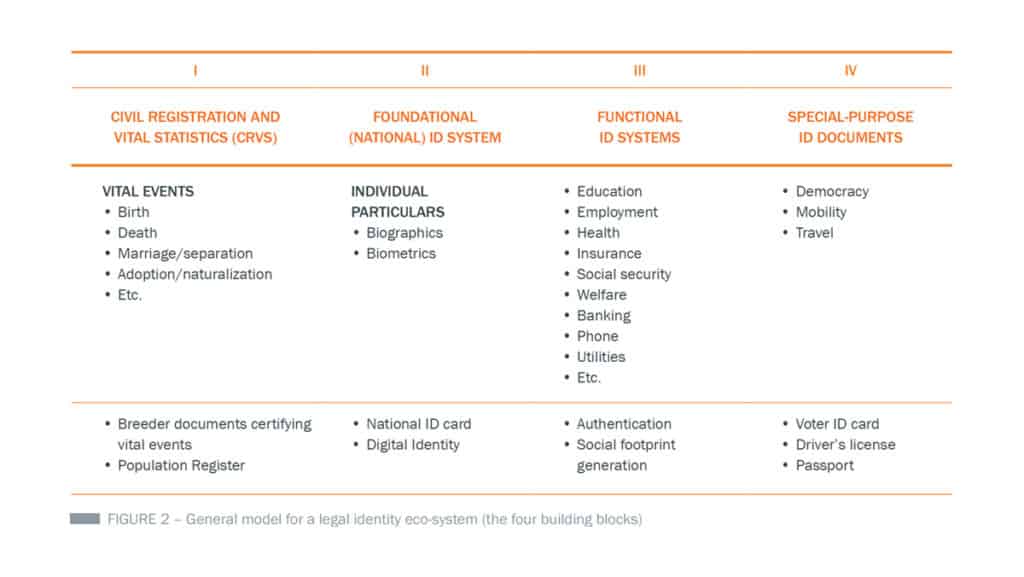 The current focus on legal identity is an economic necessity given the indication by numerous studies that legal identity facilitates greater opportunities. To address this, the World Bank has launched a significant pogramme appropriately titled “Identification or Development (ID4D)” that aims to provide comprehensive support that includes capacity-building. The programme will allow developing countries to accelerate their journey from poverty by strengthening legal identity.In the coming decade, ID4D may act as a powerful catalyst for ensuring that States have bigger, better and more digital legal identity systems. Programmes like Aadhaar (though not fully addressing legal identity) in India have shown that this is achievable in relatively short spans of time on a large scale.Spin-offs are important. In India, Aadhaar has reduced fist-time passport application verification from forty-seven days to one day. This is significant and includes powerful capabilities such as biometric authentication.

Robust legal identity systems provide more reliable evidence of identity, which can be effective for enhancing security. Trafficking for example, is more prone to originate from States with poor identity records, so there is a bigger possibility of criminals and terrorists assuming false identities. Though many States invest in secure eDocument infrastructures, because of weak civil registration processes, documents are issued to wrong persons with potentially disastrous consequences.

Cooperation among States also helps. The Schengen region is a great example and it is supported by the United Nations through the International Organization for Migration (IOM). Other regions like the Economic Community of West African States (ECOWAS) are considering similar strategies.

War, civil disturbances and natural calamities often displace populations beyond international borders. Affected individuals are at high risk of becoming stateless, deprived of human rights and education, healthcare and employment opportunities. This has already manifested in Europe, where receiving States process the legal identity of millions of individuals originating in other States, affording them asylum and where possible, refugee status.

The United Nations High Commissioner for Refugees’ office (UNHCR) is mandated to oversee two important international Conventions, for Refugees (signed in 1954) and the Reduction of Statelessness (in 1961). Despite an active role in conflictsituations, over ten million individuals remain stateless. ICAO, under special provision, offers to facilitate international travel for them through a Machine-Readable Convention Travel Document (MRCTD). However, with the impending target of 2024 (a century after the League of Nations fist addressed this issue), additional steps might be required to reinforce legal identity to prevent further statelessness.

There are other aspects that need to be firmly, yet sensitively, addressed. Many States remain indifferent to legal identity requirements; this is often attributed to government ineptitude. Whether this responsibility can be entrusted to private entities has been recently debated. Terms like “self-sovereign identity” have gained currency. This, coupled with the blockchain, a new way of storing and managing data, is being touted as the new “holy grail” for legal identity. There are, however, issues that prevent this from happening.

The existing practice and belief of legal identity as being the essence of the social contract between the citizen and the nation-state, runs deep. More importantly, it lies at the heart of the political power of the State, it determines who can vote, and who can be elected. It can disenfranchise millions with the stroke of a pen. It can be used to divide nations and unleash terror and genocide. In a recent war, a victorious army destroyed the entire civil registries of an annexed State, something that may take years to reconstruct.

Modern technology doesn’t seem to help, it actually has the potential to make such acts easier. It is important for States to provide resilient safeguards, framing which might be challenging, but is not impossible. That said, there is good news at hand.

Today we live in an interconnected world with mobile phones and the internet. Both technology and generational changes are likely to have an impact on how legal identity could be packaged and shared in the future. Already smartphones are capable of unambiguously verifying physical identity using biometrics. Some say they are just a few steps away from manifesting legal identity, while others say it might not be that simple.

Whether the mobile phone can be a carrier of legal identity documents (like the passport), is currently under intense scrutiny. International standards bodies are already tasked with mapping the details. While consideration will have to be given to many factors, including the risk of greater digital divide, there is little doubt that millennials the world over would embrace it for both its zing and convenience.

There are potential benefits or authorities too, since it would change the way travel documents and border control are managed. Even Advanced Passenger Information (API) and Passenger Name Records (PNR) could be simplified and made increasingly secure and more cost-effective. Given that flights are already booked using mobile-phones, passenger tracking could indeed find its generation-next in all this. There is little doubt that wider consultation and due diligence are required for a universal implementation that benefits all.

This is just one example of the likely directions that legal identity might take in the near future. For now, let us reach 2024, when no person may be stateless, and 2030, when everyone on this planet has a legal identity that is understood, recognized and respected by all. 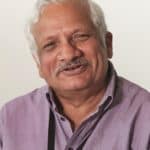 Sanjay Dharwadker is a Member of ISO/IEC JTC1/ SC17/ WG3 (Machine Readable Travel Documents) as well as CEN/TC224 WG19 (Breeder Documents). He also participates in the ICBWG on Evidence of Identity, and NTWG for the re-writing of ICAO Doc 9303, Part 7, Machine Readable Visas, and is Head of Global ID Consultancy at WCC, Utrecht, The Netherlands.