By Christopher Hornek On Dec 2, 2016
check-in at self help desk in the airport
1,524
Share FacebookTwitterLinkedinEmailPrint

Foreign Terrorist Fighters (FTF) are not a new phenomenon.

Preventing the movement of Foreign Terrorist Fighters is a complex global challenge that requires policy harmonization and an increased willingness to share information. To counter the threat, UN Security Council Resolution 2178 calls for the implementation of robust border management measures worldwide, including the use of passenger data by States. IATA is supporting ICAO’s work in developing standards for passenger data exchange in co-operation with States and the World Customs Organization (WCO), and also provides capacity building to support passenger data exchange programmes that are implemented in-line with these standards.

The modern era has seen a number of conflicts attracting FTF, not just because the borders in many States with conflict zones are more accessible than other zones, but because of the sectarian, religious and ethnic nature of conflicts, and because the international community is not able to end them.

Terrorism experts have established five points in the FTF cycle: (1) deciding to join the fight, (2) travelling to the conflict zone, (3) fighting, (4) returning to the country of origin or another territory and (5) plotting terrorist attacks with the use of the newly acquired combat tactics or other specialized skills.

Clearly, the role of passenger data, and of border security in general, affects the departure and eventual return travel of FTF. Preventing departure is vital, since the role of foreign fighters in fueling conflict should never be underestimated. In addition to being exposed to weapons and explosives training, FTF will have been exposed to a terrorist logistics network covering travel, funding and recruitment.

In some cases this travel is supported by underground facilitation networks that can provide false identity documentation. The UN 1267 Committee report “Analysis and recommendations with regard to the global threat from foreign terrorist fighters” (S/2015/358) notes that while air travel is the preferred method for long-range travel, the majority of FTF enter States through land borders.

UN SCR 2178 addressed the acute and growing threat posed by FTF, including a passage that “calls upon [UN] Member States to require that airlines operating in their territories provide advance passenger information to the appropriate national authorities in order to detect the departure from their territories, or attempted entry into or transit through their territories, by means of civil aircraft of individuals on the UN Al Qaeda Sanctions List.”

UNSCR 2178 will drive a significant increase in the adoption and implementation of Advance Passenger Information (API) regimes around the globe in the foreseeable future. API allows authorities to identify people they know about, such as individuals of concern who have been placed on watch-lists like INTERPOL databases.

Governments are interested in PNR because the data can provide information that helps identify people and trends Governments are not aware of, things like suspicious travel patterns or relationships. Governments should bear in mind that PNR is quite distinct from API, and is collected by airlines and travel agencies for commercial and operational purposes only, and in some environments could be limited to a name and flight number.

Critically, PNR does not consist of Government validated information, such as the passport details contained in API. PNR exchange is subject to data privacy concerns and legal agreements that allow public-private data sharing across jurisdictions. Though collecting passenger data provides Governments with a number of national security benefits, the costs for communicating these data are outsourced to air carriers or the passenger through specific fees.

IATA’s position is that Governments collect passenger data largely for border security and facilitation reasons and as such, should assume the costs for that process, a policy outlined by ICAO’s Policies on Charges for Airports and Air Navigation Services (Doc 9082). This is the case for API as well as PNR data transfer, which is more expensive than API, due to a potentially larger data-set.

Airlines, service providers and Governments have invested hundreds of millions of dollars in systems that comply with internationally-agreed standards and messaging formats for API and PNR. To ensure global alignment and harmonization, it is essential that all States developing a new API and/or PNR application align their programme specifications and communication protocols with the standards and best practices agreed and adopted by WCO, ICAO and IATA.

WCO, IATA and ICAO API Guidelines encourage States to require only those data deemed essential in conducting the necessary risk and threat assessment. Further, Standard 3.48.1 of ICAO’s Annex 9 (14th Edition) limits passenger data to those elements that can be retrieved from the machine-readable zone on travel documents that are compliant with ICAO’s Machine Readable Travel Documents publication (Doc 9303).

In order to meet the primary objective of UNSCR 2178, which is to identify and prevent the travel of persons covered by that resolution, it is essential that States considering iAPI vet and respond to passenger data in real time and prior to that person having access to secure airport areas or to aircraft.

States should agree on a single agency as the primary data receiver, which would then be obliged to share that data with all other agencies having a legal interest in that material. This is known as the “Single Window” concept, as states in Recommended Practice 4.17.1 of ICAO’s Annex 9.

The airline industry is ready to play its part. In doing so, IATA would stress that Governments align their passenger data requirements with international standards and also bear the costs for receiving the passenger data from which it benefits. While airlines can provide critical information, if the receiving State is not aware of a threat because a third country has not shared vital information, then the framework of passenger data exchange and border control will not be able to prevent the movement of FTF. 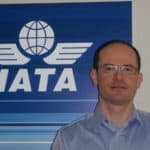 Christopher Hornek is the Manager of Aviation Security and Facilitation at IATA, where he promotes harmonized passenger data exchange programmes. From 2003-2015 Christopher was with the Organization for Security and Co-operation in Europe (OSCE), where he served in different positions in Turkmenistan and Uzbekistan.