“There is significant work ahead for States and ICAO in the implementation of coordinated activities aimed at rectifying aviation security and facilitation deficiencies in a sustainable manner,” remarked the Director of ICAO’s Air Transport Bureau, Mr. Boubacar Djibo, at the opening of the ICAO Traveller Identification Programme (ICAO TRIP) Regional Seminar taking place in Brasilia. Facilitation is the processing of passenger clearance; the enhancement of aviation security and travel facilitation are twin and reciprocal objectives. “However, with mutual agreement in the pursuit of common goals, I am confident we will build an impressive record of progress in strengthening the global travel document system, and thereby enhance the security and facilitation of international civil aviation.” 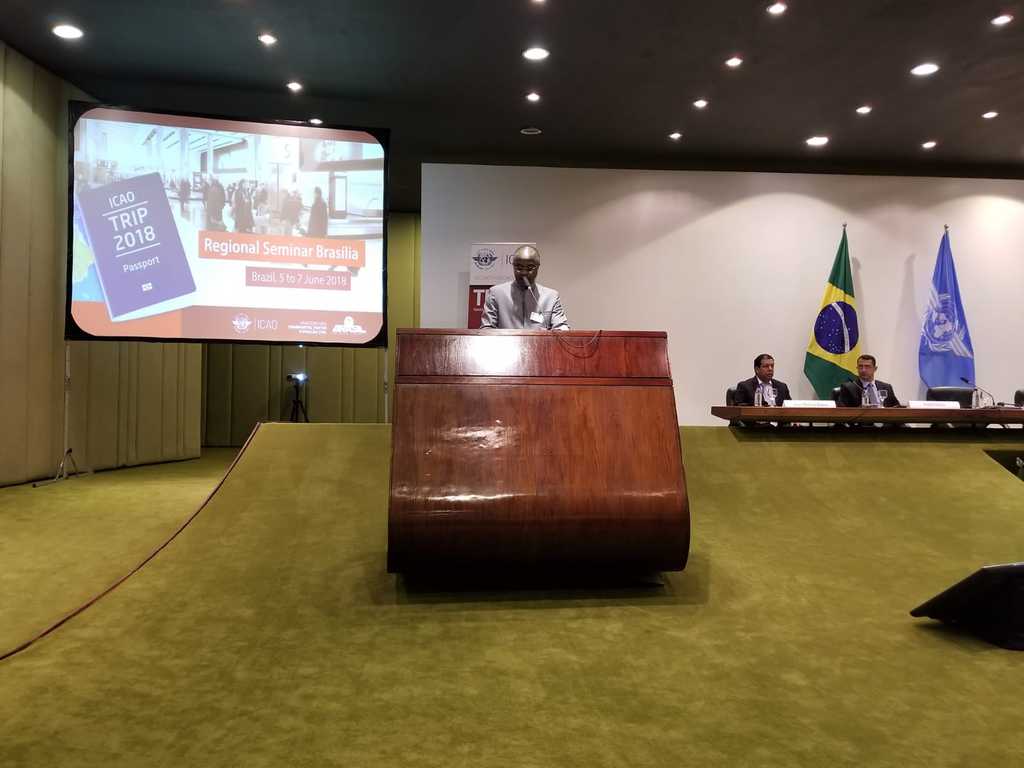 His remarks, delivered on behalf of ICAO’s Secretary General, Dr. Fang Liu, underscored the TRIP Strategy’s pivotal importance to the protection of commercial flight, the prevention of illegitimate travel (including by foreign terrorist fighters), and the efficiency of the civil aviation travel system as a whole. Generously hosted by the Government of Brazil, the Seminar is providing a unique opportunity to encourage full implementation of the Strategy among ICAO’s 192 Member States. Brazil’s Minister of Transport, Mr. Valter Casimiro Silveira, and Representative on the ICAO Council, Mrs. Mitzi Gurgel Valente da Costa, were in attendance, as was the Ministry of Foreign Affairs of Brazil’s Undersecretary General for Economic and Financial Affairs, Ambassador Ronaldo Costa Filho. 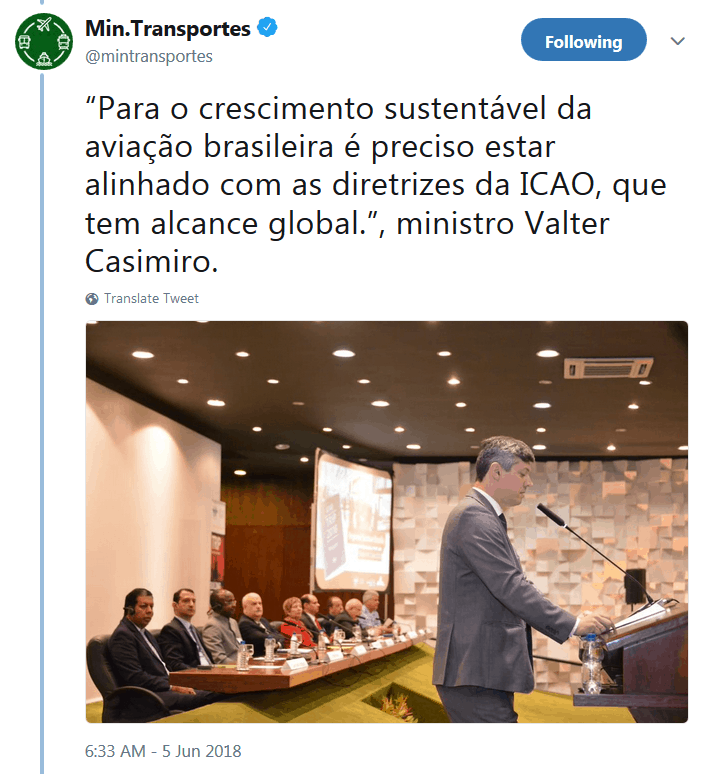 The TRIP Strategy’s primary objectives are to strengthen the interconnected State capacities relating to the establishment, protection and management of citizen identity, and secondly to determine secure systems of travel document production and border control facilitation. It includes the deployment of Machine Readable Travel documents (MRTDs) and modernized border control management.

“The ICAO TRIP strategy helps to harmonize the global line of defence in our shared battles: confronting international terrorist movements, cross border crime, and the many other threats to the safety and security of civil society and international aviation. The Strategy has been recognized for its contributions to United Nations Security Council Resolutions 2178, 2309, 2368 and 2396, adopted in 2014, 2016, and 2017 respectively,” Mr. Djibo explained, noting that the Security Council’s Counter-Terrorism Committee has also stressed the important role of airlines in tracking the movement of high-risk passengers. More specifically, the Committee recognized the importance of national authorities sharing advanced passenger information (API) to help mitigate associated risks.

Advance Passenger Information (API) sharing, a key element of the TRIP Strategy, became mandatory under Annex 9 of the Convention on International Civil Aviation on 23 October of 2017.

Much progress remains to be achieved in terms of the implementation of this Strategy, particularly with respect to the global implementation of API systems, but also in light of the fact that some non-MRTD passports continue to circulate despite the fact that their elimination became mandatory in 2015. The Seminar’s contributions towards the deployment of these tools, and of the Strategy as a whole, are therefore crucial. The Seminar also provided an opportunity to better comprehend and even undertake the complex coordinated action between the many government entities and other stakeholders involved in the realization of progress on these issues.

The event is emblematic of ICAO’s broader commitment to its stakeholders. “ICAO is determined to establish a more systematic approach to assist States in the implementation of ICAO’s Standards and Recommended Practices (SARPs) of Annex 9, as well as the MRTD specifications described in Doc 9303 supporting the full deployment of the ICAO TRIP strategy,” Mr. Djibo remarked. “These efforts are consistent with ICAO’s ongoing ‘No Country Left Behind’ initiative, and a number of recent assistance projects have directly supported the enhancement of local and regional facilitation activities.” 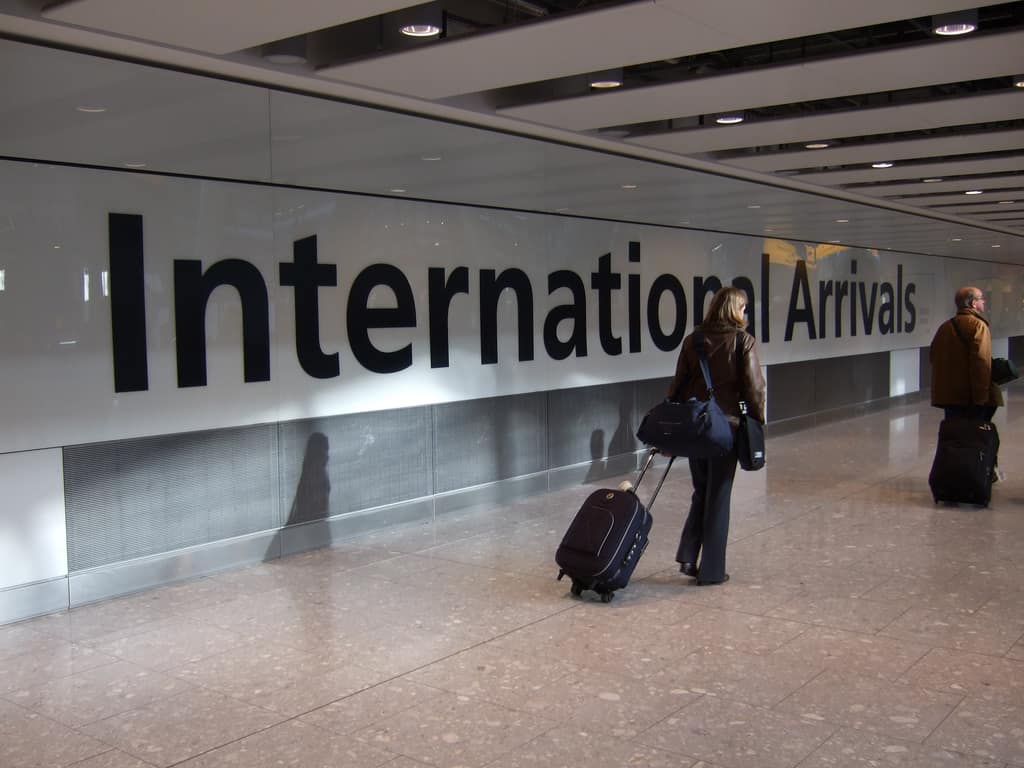 A great deal of progress has in fact already been achieved. As of today, most of ICAO’s 192 Member States are fully compliant with ICAO’s MRTD requirements, and more than 800 million ePassports issued by over 120 Member States are currently circulating. Highlighting the fact that ePassport technology is recommended by ICAO, Mr. Djibo encouraged States to also ramp up participation in ICAO Public Key Directory (PKD) to verify and authenticate their ePassports. “ The PKD permits States to capitalize on the full security and facilitation benefits that ePassports are meant to deliver,” he noted.

Further headway is also resulting from the ICAO TRIP Strategy project that, thanks to the funding of the Government of Canada,  was conducted in the Caribbean Region in partnership with the Counter-Terrorism Committee’s Executive Directorate (CTED) and other international organizations. Among other achievements, the project resulted in a new set of guidelines focused on effective border control management: the ICAO TRIP Guide on Border Control Management. It complements the ICAO TRIP Strategy Compendium, which was published in October 2017.

“ICAO guidance materials will support the significant work that remains ahead, for States and ICAO, as we strive to further coordinate our efforts and rectify aviation security and facilitation deficiencies in a robust and affordable manner,” Mr. Djibo said, acknowledging the excellent working relationship ICAO enjoys towards this goal with bodies such as the United Nations Office on Drugs and Crime (UNODC), INTERPOL, the Organization of American States (OAS), the International Organization Standardization (ISO), and the International Organization for Migration (IOM).

Concluding his remarks, Mr. Djibo strongly encouraged his audience to fully capitalize on momentum gained at the Seminar by attending the Fourteenth ICAO TRIP Symposium, which will take place in Montréal from 23 to 25 October 2018. “This world-class forum for the exchange of information on all aspects of traveller identification management, and the ICAO Traveller Identification Programme (TRIP) Strategy will provide decision makers and technical experts with valuable insight on key current and emerging issues,” he explained.