After an earthquake hit Japan’s Nankai region, a village chief noticed signs of an imminent tsunami as the tide began receding. He set fire to his rice sheaves “Inamura” to warn the villagers below so they could flee to higher ground. That chief saved countless lives during the devastating Ansei-Nankai Tsunami and today, November 5th, 2016, marks the first official World Tsunami Awareness Day, a date that was chosen specifically to honor the story of the Japanese “Inamura-no-hi” hero.

As a means for supporting the Sendai Framework for Disaster Risk Reduction 2015-2030, the 2030 Agenda for Sustainable Development, with ICAO Assembly Resolutions A39-24: Strategy on Disaster Risk Reduction and Response Mechanisms in Aviation and A39-25, Aviation’s contribution towards the United Nations 2030 Agenda for Sustainable Development, which were adopted in 2016, the International Civil Aviation Organization (ICAO) joins the efforts of the bigger UN System in raising awareness and spotlighting tsunami risks in aviation.

What is a Tsunami?

Most tsunamis are caused by underwater earthquakes with magnitudes of 7.0 or higher or landslides or volcanic eruptions. The enormous quantity of water displaced during these events launches a series of ocean waves that sometimes reach heights of 30.5m, that travel across the sea at a speed often reaches 805Km/hour (which is roughly the same as a jet plane). Such a pace allows tsunamis to travel up to 1000Km and cause significant damage with very little energy lost along the way. NOAA sources indicate that the 2004 Indian Ocean Tsunami that originated off the Indonesian west coast killed a total of 226 898 people, 52 071 of whom were located in Somalia, South Africa, Sri Lanka, Tanzania and Yemen.

The NOAA map included below illustrates 1200 tsunami source events between 1610 B.C. and 2014. The most geologically active area is situated in the pacific ocean with 69% of tsunami sources. This can be clearly observed on the map since most red and yellow figures are concentrated in that specific area. In fact, regional tsunamis have caused 256 456 deaths between 1975 and 2014. 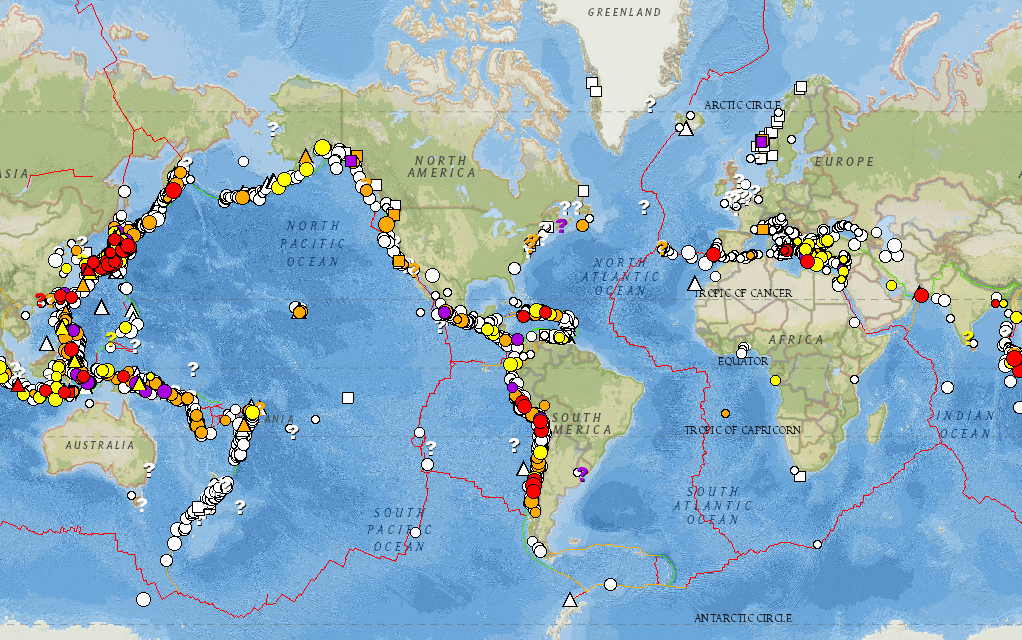 Tsunamis have been some of the most devastating natural disasters to human life and property. Today, hundreds of millions of people live in tsunami-prone regions and increasing migration to coastal areas amplifies the exposure to this hazard. With respect to aviation, there are over 1,400 aerodromes worldwide that are used for international air transport. Globally, 25% of those are located near the coast at elevations lower than 10m. That percentage reaches 45% in Asia, which represents the most exposed region of all.

The interactive world map is shown below (which can be accessed here) shows the 1,741 aerodromes located within 3Nm of the coast and their respective heights. 32 of those, represented in green on map 10, were identified as vulnerable based on their distance to the tsunami-generating tectonic plaques with 14 highly exposed circled in red.  For additional, interactive mapping information, please visit this site. 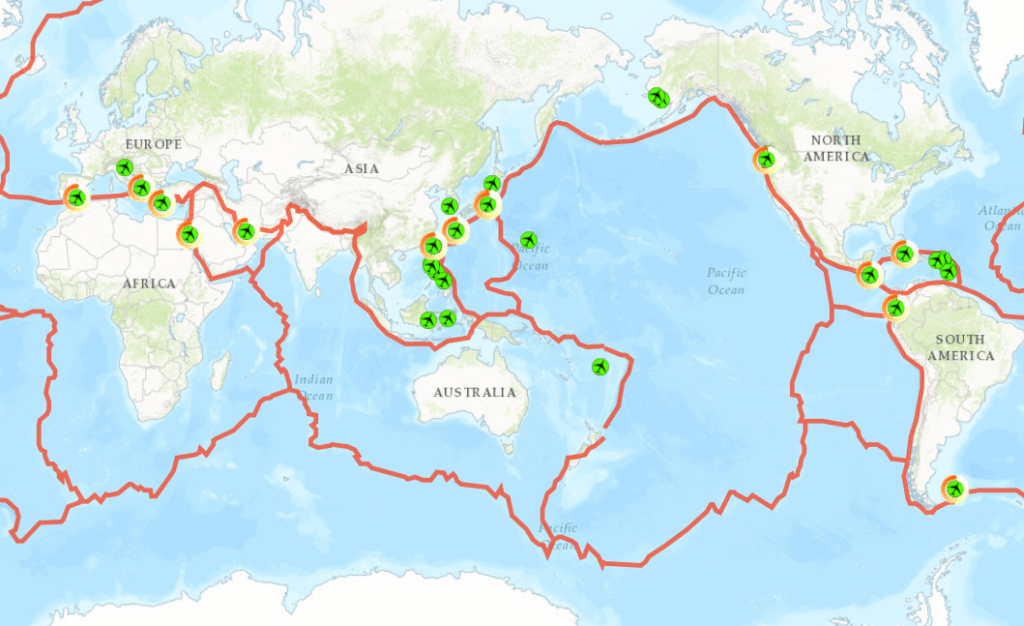 Information from ICAO and NOAA highlights the 30 international aerodromes that have been the most frequently exposed to tsunamis between 1996 and 2016. The horizontal axis shows the distance between the international aerodromes and the epicentres. We observe that 24 of those are located in the Pacific which emphasizes the vulnerability of the area. The dots represent specific tsunamis and contain information on the height of the waves and the distance to the airports presented. The size of the dots grows with the height of the wave, the higher the wave, the darker the colour.

Based on this information, Tokyo’s Haneda International is the most exposed aerodrome worldwide since it has faced 29 tsunamis originating at a distance closer than 1,000Km in the past 20 years. Despite its geographical location, the Haneda airport was not significantly affected by tsunamis. The last major one occurred in 2011 and though it caused the cancellation of 158 flights, no damage to airport facilities was observed.

On March 11 2011, an earthquake in the western Pacific Ocean (with a magnitude of 9.0 and a depth of 32 km) generated a devastating tsunami that caused damages in Japan, Indonesia, California, Hawaii, and Chile. According to this presentation by Japan, the earthquake, with its epicentre at approximately 72 km east of the Japan shoreline, was so powerful that it shifted the earth on its axis by an estimated 10 to 25 centimetres. In Japan alone, the resulting Tohoku-Pacific Ocean tsunami caused 15 890 deaths, 2 590 missing and overall damages valued up to $220 billion. To exacerbate the catastrophe, the giant waves disabled the cooling of nuclear reactors in Fukushima prompting an unprecedented nuclear accident.

This earthquake, the most devastating in Japan since 1995, affected several Japanese airports, especially Sendai which is the closest to the shoreline (as can be seen on the 12th slide of the map here). Enormous waves swept away cars, planes, and ground aids; they also flooded buildings, A/G, and RADAR systems. The measures and procedures in place prevented countless deaths and permitted the start of the evacuation of Sendai airport 50 minutes before the tsunami hit. Despite massive destruction and considerable material losses, no human life was lost within the airport. Flights resumed in affected airports within 3 days after disaster struck and they quickly became bases for disaster-relief efforts.

Given the exposure of Japanese airports to tsunamis, they represent excellent examples to assert that appropriate procedures and safety systems are primordial to manage crises and save lives. In fact, as one of the most vulnerable States to tsunamis, Japan presented a working paper during the 39th Session of the ICAO Assembly on the “Quick Response after Earthquake in Kumamoto Airport”. The document, which can be accessed here, describes the responses by various actors and highlights the critical lessons learned.

Since its creation, ICAO has responded to numerous crises including natural disasters that affect aviation. Creating a well laid out strategic plan ahead of time has proven crucial in ensuring more effective and coordinated responses in the event of any such large scale disasters. With respect to airports, given the sudden and often unforeseen nature of tsunamis, they must be ready to identify essential priority duties and promptly convert into disaster relief centres, shelters for the local population and generally key social infrastructures. The focus on emergency preparedness and response will help in mitigating the effects natural disasters have on the aviation industry which in turn will play its role in delivering assistance and supporting necessary humanitarian relief.

ICAO requires its Member States to have proper understanding of emergency situations and conduct effective emergency preparedness and response simulations. Annex 14 to the Chicago Convention — Aerodromes, Part I Aerodromes Design and Operation, Chapter 9.1 details aerodrome emergency planning, in case of natural disaster amongst other things, and contains relevant Standards and Recommended Practices on the matter. This Annex also mentions that for aerodromes located close to water, the emergency plan should include the establishment, testing and assessment of a predetermined response for the specialist rescue services at intervals not exceeding two years. The tests should then be reviewed to detect any deficiency and improve their effectiveness. In addition, the ICAO Airport Services Manual (Doc 9137), Part 7 – Airport Emergency Planning, outlines airport emergency plans, the roles and responsibilities of the various stakeholders and contains information on agencies to call for coordination and assistance.

Further, the ICAO Manual of Aeronautical Meteorological Practice (Doc 8896) calls for States to establish aerodrome warning systems which would give concise information on meteorological conditions that would have adverse effects on any of the following: aircraft on the ground, including parked aircraft, aerodrome facilities and aerodrome services. The warnings are cancelled once the conditions prompting the warning are no longer occurring or no longer expected to occur at the aerodrome. They relate to the occurrence or expected occurrence of numerous natural meteorological phenomena including tsunamis. 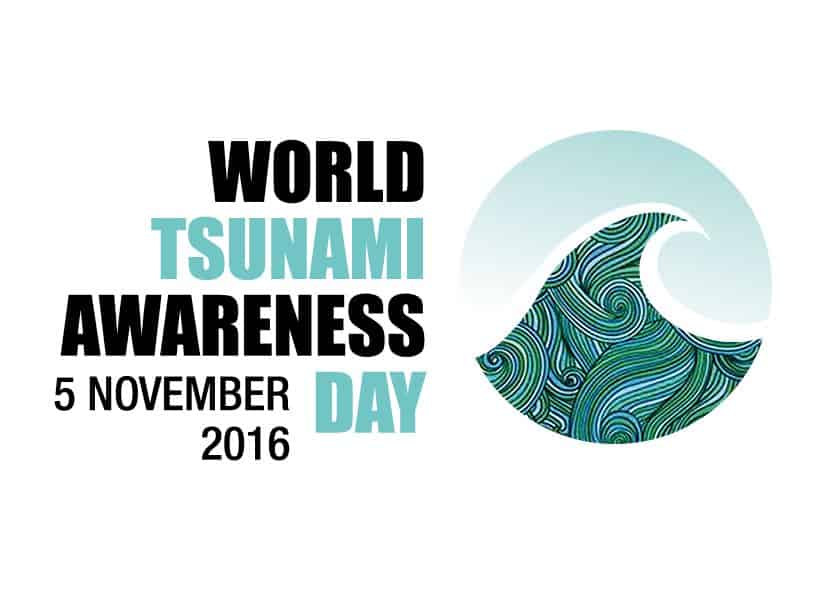 Consistent with its Mandate, ICAO will continue to support its Member States to respond to crises and disasters that may affect international civil aviation, including tsunamis, with the overall objective of improving the resilience of civil aviation infrastructure to disasters and address aviation-specific crises that could affect the safety or continuity of international civil aviation. The Sendai Framework for Disaster Risk Reduction 2015-2030 sets a strategic shift from the traditional emphasis on disaster response to disaster reduction and seeks to promote a culture of prevention already underway in ICAO. By raising awareness, learning from experiences and preparing emergency response plans, ICAO assists its Members States to anticipate, prevent and face potential disruptions to international civil aviation operations that may be cause by natural phenomena, including tsunamis.