My aviation photo: a story contest

​Aviation touches millions of people’s lives and in millions of ways. It brings loved ones together. It creates new business opportunities. It’s a bridge across cultures and borders, taking us to places we could never go to otherwise.

To celebrate aviation’s unique role, the International Civil Aviation Organization is inviting you to participate in a very special contest by sharing your personal aviation story. We want to hear about those special moments where flight has supported your hopes and aspirations.

We’re asking for a photo and a backstory of no more than 200 words to be submitted before 30 October 2018 by email to communications@icao.int. In return, we’re offering the following prizes:

So open your photo albums and take out your camera! Reminisce with family and friends and then put pen to paper. It’s about using your talent and imagination to highlight the amazing contributions of air travel and transport!

This is by no means intended as exhaustive, and prospective contestants are highly encouraged to pursue any associated topics suitable to realizing their best possible submission.

We’re really excited to review your submissions, and offer thanks in advance for helping us to raise global awareness on the incredible contributions of air travel to modern society.

Please be sure to review the Contest Guidelines to ensure your eligibility and all other requirements.

My sister and I have built a business with $100,000 monthly revenue from scratch, but it wouldn’t have happened if it weren’t for one last-minute courier flight.

What do we sell? Gin. Locally brewed, by our family, from organic ingredients. Connoisseurs describe the taste as singular. Of course, fifteen years ago, when we got started, the local food trend was just beginning. And we almost missed it!

Jenny had miraculously arranged a meeting with a wholesaler in New York and had driven some samples down in the truck. Then, disaster struck: about twelve hours before the meeting, the truck was stolen from a suburban motel, and with it, our prized gin! I received a frantic phone call in the middle of the night with the bad news.

I began contacting courier companies and, to my great relief, learned I could place a case of our gin on a flight the next morning. Jenny picked it up at the airport cargo base in a taxi and then went straight to her meeting. The rest, as they say, is history! And guess what: we still use the same company for urgent air shipments, like the one shown here. 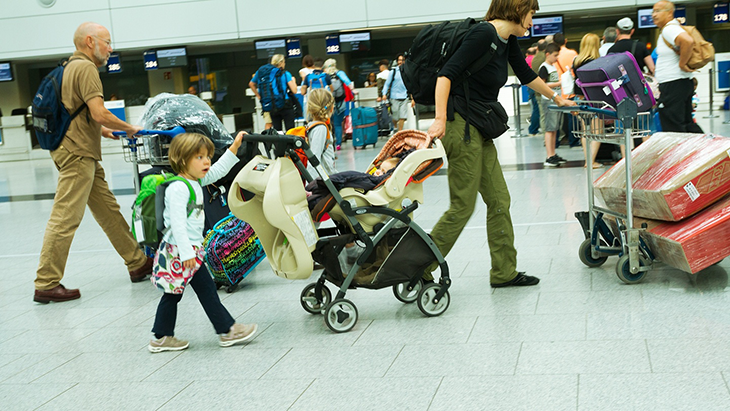 This photo catches the split second before my wife almost called the whole thing off. Granted, maybe I should have been helping with the luggage and the kids rather than mucking around with my camera, but we’d been planning  this trip for years – almost decades in fact, since we met at Dusseldorf University, where I was a foreign student. Now, we’re a family of four, and although the prospect was daunting, we decided it was finally time for a family reunion back in Australia. After all, my parents had never met the sprogs!

And if it weren’t for the cheap-as-chips tickets you can get these days, who knows when we could have gone? Yes, while at this precise moment in the trip, our spur of the moment decision to run off to Sydney may have felt like a misplaced throwback to the carelessness of uni, look at the expression on my daughters face. She is spellbound.  And she was spellbound pretty much for the rest of the trip. Meeting nana and grandad was magical. Meeting KOALAS was magical. And all four of us will remember this modern day caravan moment for the rest of our lives (ok, maybe bubs won’t.)