Recognizing the exemplary gender equality commitments of States, and related progress being achieved through the United Nations’ 2030 Agenda for Sustainable Development, Beijing Declaration, and Platform for Action, ICAO ‘s first woman Secretary General, Dr. Fang Liu, opened ICAO’s #IWD 2021 Women in Leadership High-level Dialogue today by noting that despite these advances, “gender inequalities remain persistent in our societies and within various sectors, with gains being far from consistent,” and that “international air transport is, unfortunately, no exception to this rule.”

The #IWD 2021 special aviation event was co-organized by ICAO this year with the Airports Council International (ACI) and the International Air Transport Association (IATA).

In line with this year’s UN Women IWD theme of “Women in leadership: Achieving an equal future in a COVID-19 world”, the event’s panel discussions celebrated the tremendous historic and present-day efforts and contributions of women in the aviation sector. 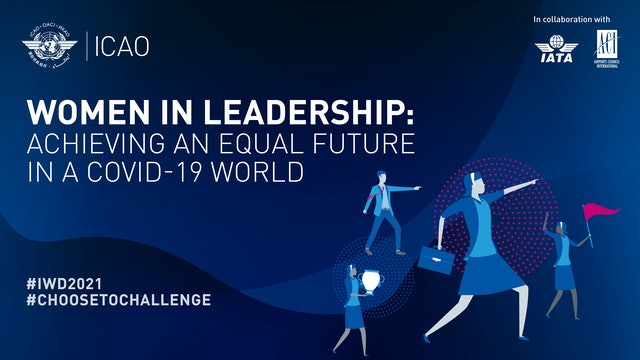 The high-level panellists also interactively explored insights on the challenges and opportunities for women created by the COVID-19 pandemic, on how all sustainability relies on greater empowerment of women, and on the importance of planning for and prioritizing a more gender-equal and equitable global pandemic and aviation sector recovery.

Recognizing that some of the most efficient and exemplary civilian responses to the COVID-19 pandemic have been overseen by women leaders, that women in aviation and other sectors have been disproportionately affected by its negative impacts, and that global populations today want to see more equal representation among women and men in both public and private leadership roles. Dr. Liu and the panellists emphasized the importance of finding ways to reimagine and rebuild a world that serves everyone.

In closing the event, ICAO Council President Salvatore Sciacchitano welcomed the high enthusiasm among the men and women of the current ICAO Council on gender equality priorities, both in terms of the composition of the governing and technical bodies of ICAO, and the challenges facing the aviation sector more broadly.

He also appreciated that the day’s discussions had identified key areas for future focus, including good governance and enabling policies, improvements in collecting and analysing data, cultural evolution, and stronger advocacy.

“All of us have a personal role to play in fostering positive change in the world, and I myself remain committed to ensuring that the ICAO Council continues to play its part,” he concluded.