ANC Talks: How does business aviation contribute to economic and societal development?

The International Business Aviation Council (IBAC) is a non-profit, member-supported international association that advocates for a federation of 14 national and regional business aviation associations around the world. Established in 1981, they are the global voice of business aviation, serving the diverse needs of the industry around the world. Their vision is to keep business flying globally and to accelerate growth, development and environmental sustainability across all regions.

For the last ANC Talk of the 214th session of the Air Navigation Commission, IBAC was invited to present the organization’s mission, mandate and structure, followed by an overview of business aviation and its contribution to economic and societal development. IBAC’s Standard Programmes, such as the International Standard for Business Aircraft Operations (IS-BAO), the International Standard for Business Aircraft Handling (IS-BAH), Business Aviation’s commitment on climate change and insight into how IBAC sees the future, were also discussed. Guests were Ali Ahmed Alnaqbi, Chairman of the Governing Board; Juergen Wiese, Vice Chairman of the Governing Board; Kurt Edwards, Director General and Andreas Meyer, Director, ICAO Liaison.

In IBAC’s view business aviation “enables the flexibility to conduct a flight operation, especially at short notice, to anywhere in the world”. IBAC’s definition of business aviation is complex to grasp, it encompasses an amalgamation of different operations and terms of purpose. Within their proposed definition, business aviation constitutes “the sector of aviation which concerns the operation or use of aircraft by companies for the carriage of passengers or goods as an aid to the conduct of their business, flown for the purpose generally considered not for public hire and piloted by individuals having, at the minimum, a valid commercial pilot licence with an instrument rating”.

Interesting to note is how IBAC structures business aviation into four main categories: 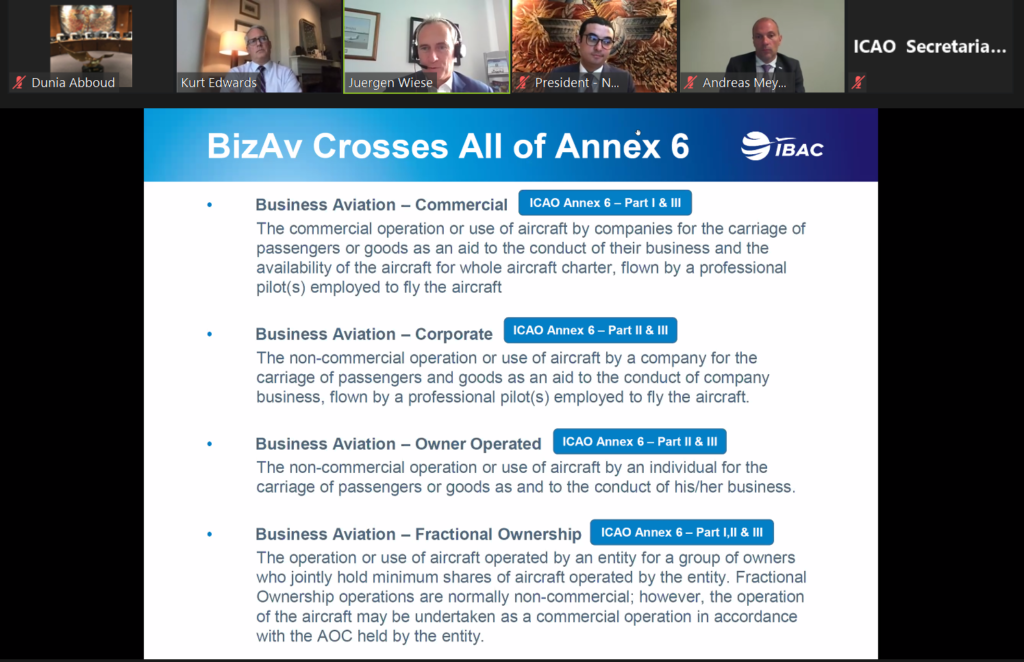 Business aviation accounts for 38,000 turbine-powered aircraft flying globally, which together constitute a wide range of more than 21,000 operators. These operators typically operate a small fleet of one to two aircraft on average, but it is worthy to mention that a significant percentage involves a larger fleet that sometimes has up to 200 aircraft. The sizes of aircraft are also varied in business aviation, ranging from single-engine turboprops up to bizliners which are most often converted airliners. The resulting operations are mostly carried out of secondary airports and the numbers are, in fact, quite significant. Within these operations, handling and maintenance are carried out.

IBAC highlighted the fact that business aircraft can be seen as productivity tools that bring along flexibility, which is the core value of business aviation. Indeed, business aviation has the capacity to deliver in-place and in-time operations, saving curfews and travel time, resulting in travel time efficiency. In addition, business aviation facilitates one-day and on-site operations to remote areas, since smaller aircraft are able to land in short strips and access smaller communities globally.

In the North American region for example, city pairs between cities which are typically not well served by commercial airlines can be served thanks to business aviation. Business aviation also has cost-efficiency advantages depending on the type of aircraft that is used. And finally, one of the big advantages of business aviation is that it provides for corporate and information-secure operations.

IBAC also stressed the important humanitarian role of business aviation. One example of this involves the crucial role business aviation played during the COVID-19 pandemic. In Europe alone, 70 repatriation flights were conducted every day. Additionally, thanks to flexibility and quick reaction times, business aviation aircraft are often the first to provide relief in disaster areas. Although business aviation does not have the capacity to conduct large-scale operations, it does provide a good solution for beginning the relief process. Business aviation can also provide on-demand services for charitable and/or international organizations; it can quickly and efficiently transport patients for treatment and conduct search and rescue missions, with aircraft ranging from helicopters to larger aircraft.

IBAC highlighted a few examples that demonstrated how businesses can be established in regions that are connected both domestically and globally thanks to business aviation. An Indian airport in Raigarh, Chattisgarh was one of the interesting examples. A fire company was established in 1991 which became an airfield about 10 years later, attracting at least five new industries in the area, ultimately creating thousands of jobs due to eased connectivity. 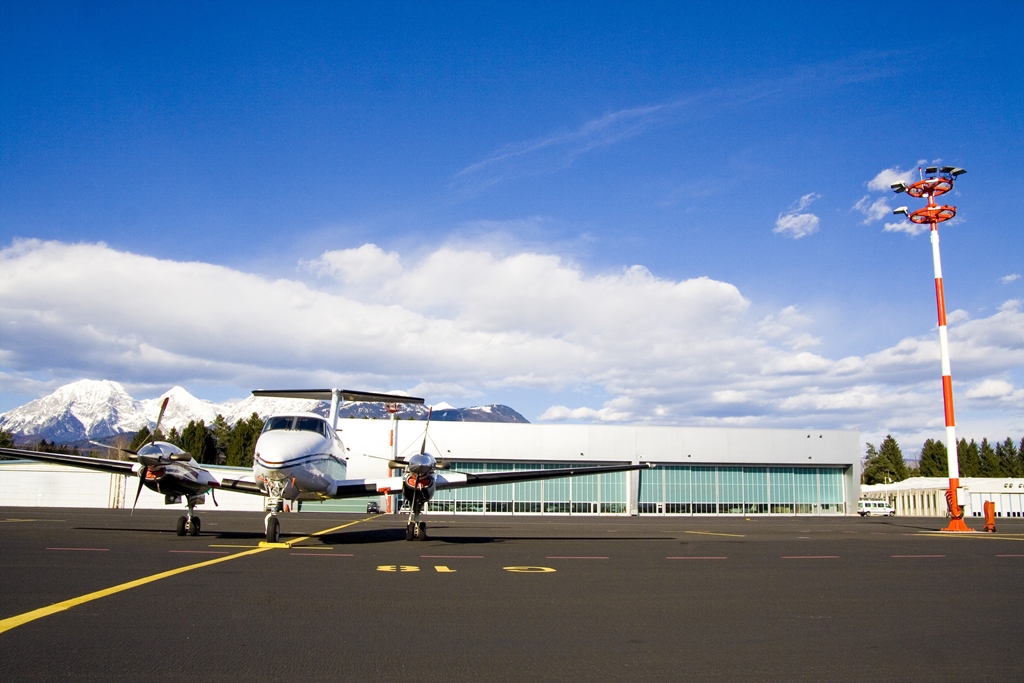 IBAC has been promoting safety-related best practices with the IS-BAO launched in 2002 and the IS-BAH launched a decade later. The IS-BAO was first established to help small non-commercial operators put systems in place to help them fly internationally within a well-established SMS framework. The IS-BAO is voluntary, but over 1,000 operators have registered to the programme since its inception. In 2014, recognizing that certain States may want to require certain standards for ground handlers as well, IBAC brought a similar structure to ground handlers providing services to smaller air operators, the IS-BAH standard. Today, 230 facilities around the world registered to it; the IS-BAH is a standard tailored to the business aircraft world. Despite being a voluntary programme, the business aviation community has demonstrated its commitment to safety, excellence and professionalism by choosing to register to it.

IS-BAO and IS-BAH are developed and reviewed by a board of experts/practitioners that meet annually to review the validity of the current standard. Throughout the year, the boards look into any changes made in the ICAO Standards and Recommended Practices (SARPs). The board also looks at recommendations coming from third-party auditors or even the operators themselves to improve the standards continuously.

The major takeaway from the IS-BAO is that Safety Management Systems (SMS) can be implemented by small airport operators and small entities like single and multi-aircraft operators. The SMS system described in the IS-BAO establishes the safety processes and procedures, the process ownership, and the collection of sensible data aimed at measuring and analyzing trends for continuous improvement. The challenge today is to convince more operators to register to the standard. The IS-BAO has the potential to be used as a tool by States with regard to registries. Among a number of initiatives, IBAC has recently engaged in discussions with EASA regarding the degree to which IS-BAO registration can count toward the currently complex non-commercial registration within Europe.

The IS-BAH is also of a voluntary nature. However, as more authorities are recognizing ground damage as a safety risk, the standard is getting ahead of this and helping ground handlers bring attention to the risk. IS-BAH brought SMS to ground handling first, and as ground handlers started to implement it, it has demonstrated to be scalable and tailored to other operations. Important to mention that part of the work developed for the IS-BAH has permitted IBAC to provide support to the ICAO Ground-Handling Task Force (GHTF).

Business Aviation as an industry has also demonstrated its commitment to action on climate change with the publication in 2009 of the Business Aviation Commitment on Climate Change (BACCC). The document sets three goals: the short term being to commit to a 2% annual fuel efficiency improvement; the medium-term being to engage in carbon-neutral growth from 2020; and long term, committing to have CO2 emissions relative to 2005 levels by 2050. Four pillars define the mentioned commitments: technology (including Sustainable Aviation Fuel (SAF)), operational improvements, infrastructure improvements and market-based measures. The critical technology that needs to be further developed is according to IBAC, SAF.

To address the knowledge gap, IBAC and its partners have been providing information to the industry on the availability of SAF and its use, through the issuance of the Business Aviation SAF Guide. IBAC has also been attending several demonstration events and trade shows in the United States and in Europe, including Davos. IBAC sees that increasing the industry’s uptake of SAF is essential, and for this to materialize, operators should be able to find and use such fuels. The issue here is one of availability, and for an industry that is quite diffuse and that comprises of a high number of small operators, establishing economies of scale for SAF truly remains a challenge. According to IBAC, States have a role to play, particularly by putting in place positive incentive policies to spur demand and supply.

New propulsion technologies, supersonic aircraft, electric vertical take-off and landing aircraft (e-VTOLs), unmanned aerial vehicles (UAV) and remotely piloted aircraft systems (RPAS) will certainly have an impact on the future of business aviation. And finally, because the price elasticity of fares is higher, business aviation will be an early adopter – if it is not already – of SAF, which is a prerequisite for the acceptance of supersonic aircraft in the future.

After the ANC Talk, Nabil Naoumi, the President of the ANC spoke with the special guests from IBAC to share further insight on this topic. This interview is shared below: 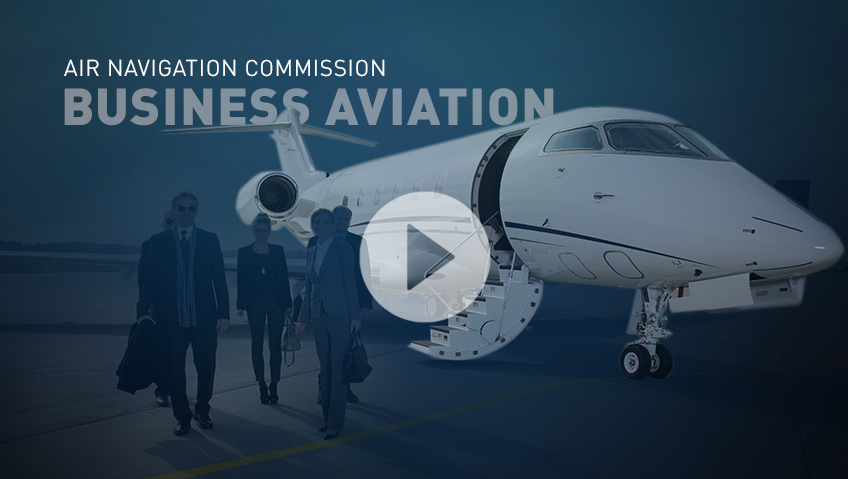