ANC TALKS with EUROCONTROL: European aviation, COVID-19 and the recovery

On Monday, June 8th, EUROCONTROL was invited to share its perspective on European aviation for the ANC Talks. The organization has been playing a central role in developing and delivering the Network Operations Recovery Plan and the provision of data for decision-making; Director General Eamonn Brennan has been leading the European debate on COVID-19. He reported on what is currently happening across Europe and how this will affect aviation globally.

EUROCONTROL is a civil-military intergovernmental organization with 41 Member States and two Comprehensive Agreement States: Israel and Morocco. Its mission is to support European aviation to become safer, more efficient and cost-effective, and to reduce the impact on the environment. The organization works closely with its Member States and European institutions and stakeholders that include Air Navigation Service Providers (ANSPs), civil and military airspace users, airports, aircraft and equipment manufacturers.

Within the services it provides its stakeholders, it is responsible for:

EUROCONTROL is very involved in research and development, and their efforts are extended through their contributions to Single European Sky ATM Research (SESAR), their extensive research in ATM, simulations in ATS, and the technical support it provides to its Member States and other stakeholders. EUROCONTROL has its own legal framework, the EUROCONTROL Convention (1960).

Despite the European continent hosting an aviation sector complex in nature, and although the market was seen prior to the COVID-19 outbreak as competitive, low-cost carriers (LCCs) such as Ryanair and easyJet, as well as some large network carriers like Lufthansa, were typically very profitable. The complexity of the European aviation sector stems from the existence of national boundaries and national ANSPs, resulting in fragmented airspace. In addition, cracks began forming in Europe’s aviation infrastructure in the last thirty years.

In practice, there are challenges in building infrastructure from both an environmental and a strategic point of view. Aviation in Europe contributes about 750 million Euros of the region’s GDP and accounts for 12.2 million jobs. With a shift in investors’ interests towards green solutions in the region and an ageing population, not only will there be a shift in the way the sector develops in the future, but Brexit is also highly likely to impact air travel. The United Kingdom is an island nation and the largest passenger generating market, so the conditions of the deal will certainly impact the capacity of the European market to grow in the future. For all of these reasons, there is a recognized need in Europe for understanding how to use the current system in the most efficient and effective possible way.

The aviation sector in Europe has dramatically changed in recent years with LCCs entering the market and becoming today among the predominant airlines in the region. Ryanair is the largest airline with 152 million passengers, followed by the network carrier Lufthansa (145 million passengers), IAG (118 million), Air France-KLM (104 million) and easyJet (97 million). This would have been a different reality only fifteen to twenty years ago and translates a major change towards point-to-point operations in the region. When looking at the global forecast of passenger market growth by 2040, although European Union Member States were traditionally present in the top 10 markets, by 2040, this will not be the case anymore with only Spain being represented in 8th position and Asian States such as China, India, Indonesia and Japan moving to the top five. The whole travel fulcrum is starting to shift to the East and Europe is today already very much a mature nature market.

In Europe, there are 43 States, 68 en-route centres, 6,700 airlines, and 525 airports. This system takes about 6 billion of capital expenditure and up to +37,000 flights on a busy day, resulting in about 11 million flights a year. The challenges are no different from other parts of the world in that they include safety-critical infrastructure that needs to be maintained, environmental pressures, and new technologies that the continent is very keen to invest in to help enhance Europe’s airspace in terms of safety, security and sustainability.

That said – the airspace is inefficient in the way it is currently managed. Its organization has not evolved since the sixties, and today’s reality involves a lack of a real network and aircraft flying routes that are longer than necessary, resulting in ATC bottlenecks and challenges provided by ATC capacity, including staff resources. The issue for the EUROCONTROL Network Manager is that if a problem arises such as a natural disaster or industrial action, the consequences can be significant and the operational solutions complex. 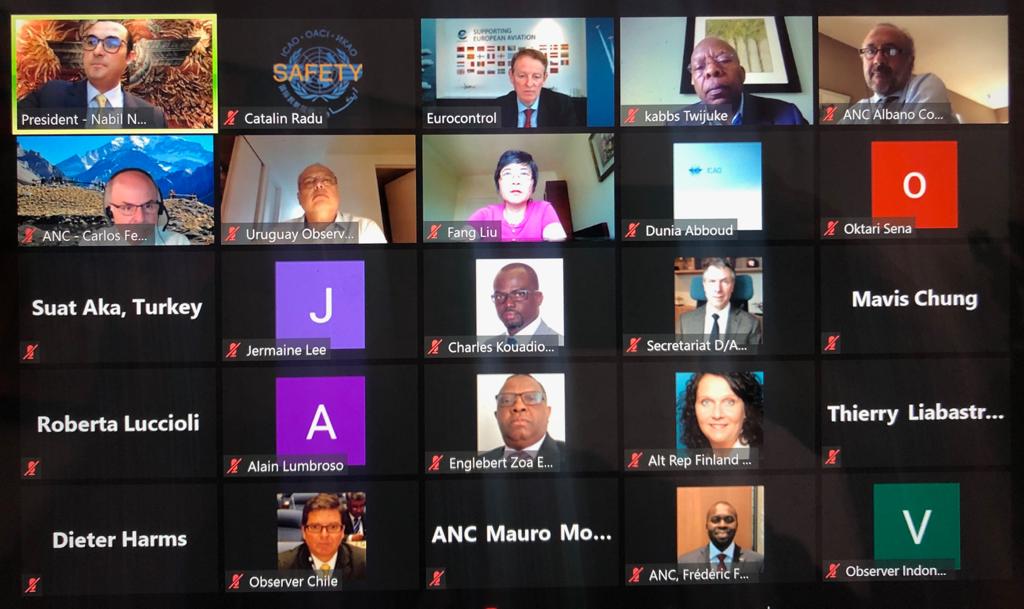 Reorganizing the airspace in Europe would bring about huge environmental and capacity gains. This isn’t easy, however, because it would require discussions between all of the States in the region. Inefficient route networks, longer routings, and inefficient flight levels resulted in increases in CO2 of (on average) 7.2% in 2019 while traffic grew by 3.5%. The new EU ‘Green Deal’ should solve a number of these issues. While many of the network carriers use hubs, short-haul LCCs tend to have better environmental performance because they conduct point-to-point operations, have high load factors and fly newer aircraft than the ones available to network carriers.

Today, synthetic aviation fuels are seen as a viable alternative to conventional fuels in Europe since they could potentially bring up to 80% reduction in CO2 emissions across their lifecycle. However, the current cost is five times the price of normal fuels, making these green alternatives prohibitive. EUROCONTROL published a paper last year discussing the five top decarbonisation options currently available for the region. 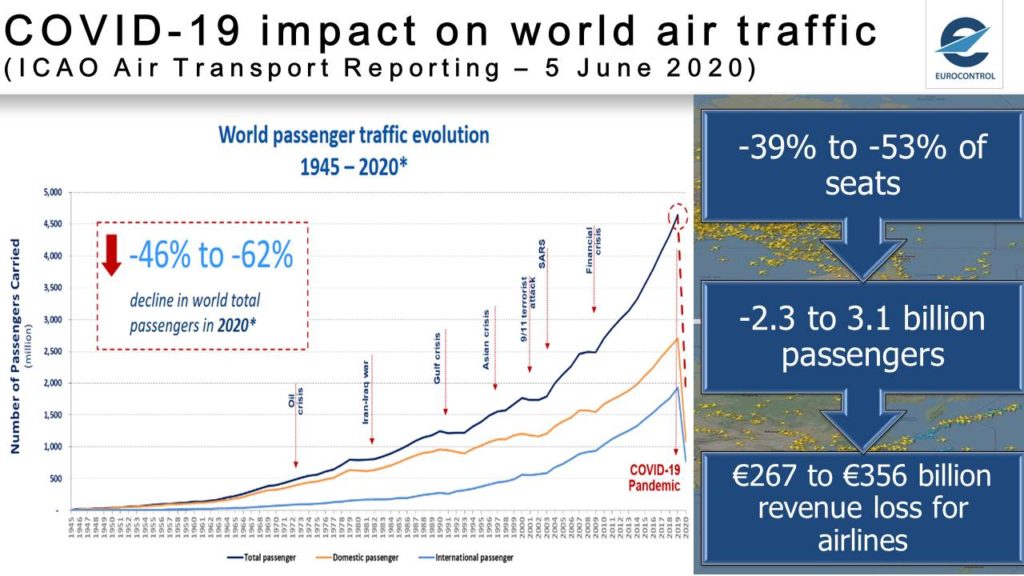 COVID-19 has heavily impacted the European network in terms of air traffic. The decline was quite catastrophic, from around 30,000 flights a day to 2,099 at the worst point of the crisis and around 6,000 by mid-June. Major Asia Pacific and North Atlantic operations have almost ceased. While the lockdown started in some parts of Europe on the 21st of February, by the 30th of March, there was a 90% reduction in traffic. ACI announced a 98% reduction in passengers as of May. With the reduction in traffic and in passengers, came a huge reduction in CO2 emissions. However, while traffic was down by 88.5% in April 2020, CO2 emissions in the same month were down by 84.1%, showing that the network is not as efficient as it should be. A few States have only recently started opening up for business. Though it is envisioned that domestic European travel could potentially return to 50% in August, international travel will likely take more time to get back on track.

In light of the COVID-19 crisis, EUROCONTROL has worked very closely with the European Union Aviation Safety Agency (EASA) to put together a number of proposals to deal with the post-COVID situation. EUROCONTROL has also invested in a number of crisis management activities: traffic reduction management (NOTAMs, business continuity plans), activating the European Aviation Crisis Coordination Cell, developing a Network Operations Recovery Plan (including bi-weekly conference calls) and monitoring cybersecurity. Throughout the crisis, EUROCONTROL provided data on a daily basis to help with decision-making, including an interactive dashboard, updates on measures taken by airlines and States, a regular comprehensive briefing on the impact of COVID-19 and other daily publications.

Most of the airlines had about two months reserve when the crisis started and received about 112 billion Euros in State aid – 55% in bailout loans – which would lead to increases in future debt. Another issue is that about 452 billion Euros was lost in GDP, with 81 billion Euros loss of revenue, 55% less passenger demand and 6.7 million jobs at risk. To help the sector recover from the crisis, EUROCONTROL devised a four-pillar package in solidarity to States, Airlines and ANSPs. The first pillar is to provide support to airlines by deferring 1.1 billion Euros of route charges into November 2020 and 2021 to spread it out over a longer period of time. The second pillar is to provide support to ANSPs by working to secure a loan of 1.3 billion Euros to provide loans to ANSPs all over Europe for the month of June, July, August and September. The third pillar is to support Member States by proposing a relief on State contribution, with the aim of deferring financial contributions by up to 19%. And the fourth pillar is to promote agency cash savings, cost containment and reduction.

EUROCONTROL and ICAO have been partners since 1996. Through this partnership, EUROCONTROL is able to support the work of the organization. A lot of the technical support is provided through the participation of its experts in the technical panels, secondments, multidisciplinary efforts, to give a few examples.  Given the speed at which technology is moving, EUROCONTROL is optimistic that ICAO can adapt the length of time it takes to develop and adopt a SARP so that it is better aligned with the current situation. Another topic EUROCONTROL works closely with ICAO on is cybersecurity, the goal being to secure global exchange of information through the Aviation Trust Framework.

In terms of other developments, EUROCONTROL recently agreed to host ECAC (with administrative and legal support) at its premises in Brussels and recently awarded a contract for the provision of global ADS-B data to Aireon. EUROCONTROL also signed data exchange agreements with Azerbaijan, Brazil, Singapore and the USA among other States, thereby starting to build a truly global ATFM network. It is also supporting bodies such as SESAR or EASA – through the Joint Work Programmes, including a new Eurocontrol-EASA Joint Technical Cooperation Office.

Looking forward, EUROCONTROL has four key areas of focus: supporting the aviation industry to recover from COVID-19, to support the Single European Sky and coordinate with partners, to support States and industry with the best possible technical expertise and coordination and to do all this in a manner that will support the delivery of a sustainable approach to aviation.

After the ANC Talk, Nabil Naoumi, the President of the ANC spoke with the Director General of EUROCONTROL to share further insight on this topic. This interview is shared on ICAO TV,  here.