As business markets become national and international in scale, airports in areas with high population densities become a valuable asset when economic development is promoted. Indeed, with their ability to connect adjacent, vicinity and metropolitan areas to the rest of the air transport network – and by extension to the world – not only do airports act as a global gateway for people living within connected regions, they also attract new businesses that play an important role in tourism development. Through airports, aviation plays a central role in supporting tourism, making the air transport sector a driving factor and, in some cases, a stimulator of change in tourism.

Today we celebrate World Tourism Day. September 27th was commemorated in 1980 to foster awareness around the world on the importance of tourism and its social, cultural, political and economic value. It is instrumental in helping to reach the Sustainable Development Goals outlined in the 2030 Agenda for Sustainable Development.

Though aviation contributes to the achievements in many sectors, it plays a critical role in  tourism. Accessibility to the air transport system is a complex concept, one that factors in distance, facilities, quality, availability and cost. ICAO developed the Air Transport Accessibility Application to illustrate the fraction of a State’s population who live within a 100 km radius from an aerodrome.

We limited this application to the evaluation of distance as a concept, considering that a person has access to international air transport if he or she lives within a 100km radius from an aerodrome that offers direct or indirect scheduled international flights.

To begin, we used the 2015 UN-Adjusted gridded population counts, as published by the Socioeconomic Data and Applications Center (SEDAC). It is one of the Distributed Active Archive Centers (DAACs) in NASA’s Earth Observing System Data and Information System (EOSDIS). The population data was then aggregated through spatial queries, counting the number of people living within a 100km distance away from aerodromes listed as international by ICAO, or having scheduled flights (ICAO/OAG source) to one of those international airports. 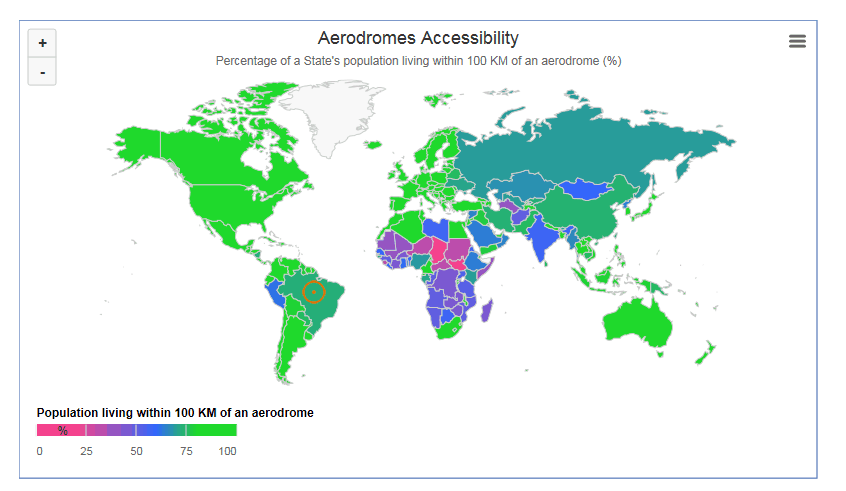 The application provides a visual framework for understanding the results at the State, regional and global levels. Data is available for every country; the overall results are summarized at the top of the profile. The application gives results based on accessibility to international airports defined as aerodromes with regular flights to another State, and other aerodromes with regular flights to at least one international aerodrome.

According to the data, bigger countries will tend to have lower accessibility scores than small countries due to the size of their territory, which demands a bigger and stronger aerodrome network to ensure accessibility of air transport services.

The least developed countries are defined by the United Nations as having a level of accessibility of only 61.55%. In Somalia for example, only 36.46% of the country’s population lives within 100 km of an aerodrome that offer direct or indirect scheduled international flights.  Compared to the world average, which is as high as 74.41%, Somalia’s accessibility levels suggest that the country’s population is poorly connected to the rest of the world.

The results are similar for Landlocked Developing Countries (LLDCs) where accessibility is 61.59%. On the contrary, due to their small size, Small Island Developing States (SIDS) will tend to  have a very good accessibility score with an average of 91.78%.

These results help raise awareness among public and private sector stakeholders, decision-makers and the international community on the necessity of developing airport infrastructure in the country to enhance people’s accessibility to air transport services.

Rendering air transport services accessible to people from a distance perspective is beneficial in the sense that it provides a country with more exposure to the rest of the world. It increases the opportunities for tourism and business development, and improving as a result employment prospects within a country. Thus, evaluating air transport based on accessibility expands the range of possible solutions.

Coming soon: we will measure an airport’s usefulness to a potential user. This will depend on the number of locations reachable from that airport, the characteristics of each location, the price of travel to each location, and the convenience of using the airport, among other variables. The accessibility application can serve users in many ways, you can access the link for it here.

Tourism and COVID-19: “One of the wonders of the world” must build back better