The less precise information is, the more credible it may be

The question is: what makes the information credible?

Disclosing or preannouncing information on products, prices, costs, demand and future production or capacity plans is a common practice in most industries. The airline industry is no exception. Airlines regularly announce planning information that can include schedules, capacities, fares and financial projections, their operational outlook, and business strategies.

These announcements are not solely meant for their customers. In a competitive environment, airlines have an incentive to use and transmit information strategically. They can shift outcome that it is favorable for them by influencing the market and their competitors’ actions. Airlines disclose information that must be credible enough to affect their competitors’ interpretation. This article discusses strategies for making information credible, without incurring substantive costs, from an economics point of view.

When interests are conflicting between airlines, the sender of the information might have an incentive to manipulate it. Incentives are lower when dissemination is costly. When transmitting information would incur such significant costs that sharing inaccurate data would not be worthwhile, airlines would choose to disclose their complete information and competitors would trust it. As an example, an airline’s investment to expand airport gate facilities is a credible signal that there will be increases in frequencies and capacity at this airport in the future.

For day-to-day business, however, airlines often signal the market without incurring expensive costs. Most preannounced information like schedules, capacities, and fares can be sent and received by airlines at a negligible cost. This information is not binding, i.e., does not require commitment or necessarily match the actual results and achievements. Moreover, it is unlikely that the subsequent revisions of these forward-looking plans would damage the reputation of the airline, particularly amid the current pandemic with so many uncertainties. Such inexpensive and non-binding information transmission is called “cheap talk” in game theory.

One example of cheap talk is airlines’ schedule planning. Airlines usually announce their international schedules 330 days to one year in advance and domestic schedules 90 days to one year in advance. Since the cost of schedule changes in the timetable database is very low, airlines will change their schedules until the very last moment. This means that the planned schedule is merely a “moving target” and does not guarantee that all these flights will be operated.

Charts 1 and 2 depict the airlines’ monthly planned seat numbers for the 2020/2021 winter and summer seasons. Due to the remarkably high uncertainties in demand, even short-term demand is hard to predict so there is significant fluctuation with planned scheduled capacity. For example, the planned number of international seats in July 2021 increased slowly from around 157 million seats a year ago to 176 million seats seven months ago. After that, it turned to a sharp decrease, with the actual number of seats dropping to 97 million eventually.

In a cheap talk setting, when there is a conflict of interest between airlines, each airline has an incentive to overstate or understate its schedule plans to mislead competitors. This could make schedule information less credible; and consequently, competitors ignore such information as “babbling”. Nevertheless, the literature on cheap talk[1] indicates that even when the incentives of the sender and the receiver of information are misaligned, credible information can be partially transmitted by making it imprecise, i.e. constructively ambiguous. For example, rather than announcing that its target for the monthly flight frequency is exactly 100, the airline can intentionally convey vague information that it has a target somewhere in the 90 to 120 range.

The term “constructive ambiguity” refers to the deliberate use of ambiguous language on a sensitive issue in order to advance some political purpose[2]. In political negotiations, it can be helpful to let each party read its own interpretation while preventing a breakdown of talks by obscuring an issue that remains contentious.

Constructively, ambiguous information is often introduced in the Central Bank’s policy announcement. Aiming to influence market expectations and enhance the effectiveness of their monetary policy, Central Banks tend to keep their announcements obscure, for example, only giving a range within which the target may be included. According to the International Monetary Fund (IMF) paper[3], “Ambiguity allows some discretion without necessarily a loss in credibility over time. Though an ambiguous rule may be more credible than a transparent rule (in the sense that the subjective probability that the rule will be obeyed is higher for the former than the latter), it is less well-specified and therefore will have less impact on market behavior than a credible transparent rule.”

By contrast, if Airline Y preannounces a clear precise plan, it expects that Airline X would react strongly to it, and thus has an incentive to manipulate the information to influence Airline X’s decision-making. Understanding this incentive, Airline X would ignore or discount Airline Y’s precise information, no matter how accurate it is. 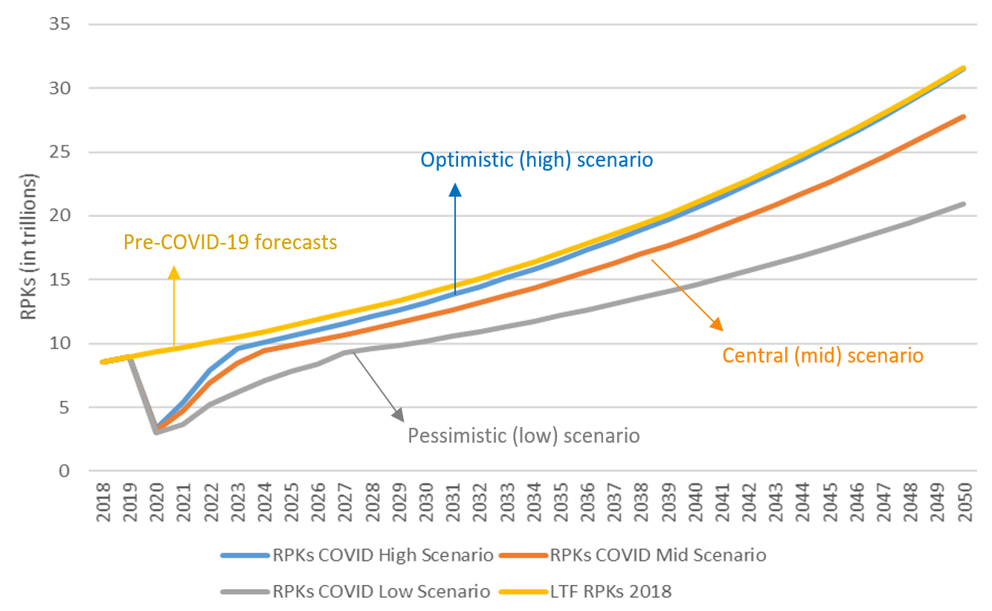 Likewise, using the role of constructive ambiguity can help explain why many forecasts and outlooks of airlines are presented with multiple scenarios, or in the ranges of high and low scenarios instead of a single most possible scenario. For example, ICAO’s long-term air traffic forecasts in the above chart present three scenarios. While in an optimistic scenario passenger traffic could return to the pre-COVID-19 trend from around 2030, in central or pessimistic scenarios, there will be permanent downward shifts (i.e. traffic will no longer return to the pre-COVID-19 trend-line growth). With multiple scenarios or broad ranges, the forecasts can be trusted more by competitors because rationale market players understand that a single scenario entails overstate or understate risks.

In economic and biological literature, costly signaling or commitments are a justification for communicating complete information honestly when interests conflict. The cheap talk described in this article provides a theoretical account for the communication of credible information that is non-binding, unverifiable, and cost-effective to send and receive. In this cheap talk setting, when interests are not aligned between airlines, the information in airlines’ preannounced plans tends to become constructively ambiguous. At an appropriately low level of precision, the announcement may be credible and believed by the market, and thus induce actions from competitors. The constructive ambiguity explained may be somewhat counterintuitive, but may cast doubts on a prevailing argument that only the higher precision increases the credibility of information.

Toru Hasegawa has served as Deputy Director, Economic Development in the Air Transport Bureau of ICAO since January 2015. He joined ICAO in 2000, where he served as Chief of the Revenue and Product Management Section and as an economist responsible for economic policy and infrastructure management. Prior to joining ICAO, he worked at Northwest Airlines and the Nomura Research Institute in Japan. He holds a Ph.D., an MA and a BA in economics, from Tokyo University, with a specialization in industrial organization and applied economics of pricing theories. He has published eight books (in Japanese) on airline pricing and economics.