The numbers that are shared in the article below reflect the numbers in July 2021. The analysis of the economic and aviation indicators we share here reflect the continuing impact of COVID-19 on this industry.

World Results and Analyses for July 2021 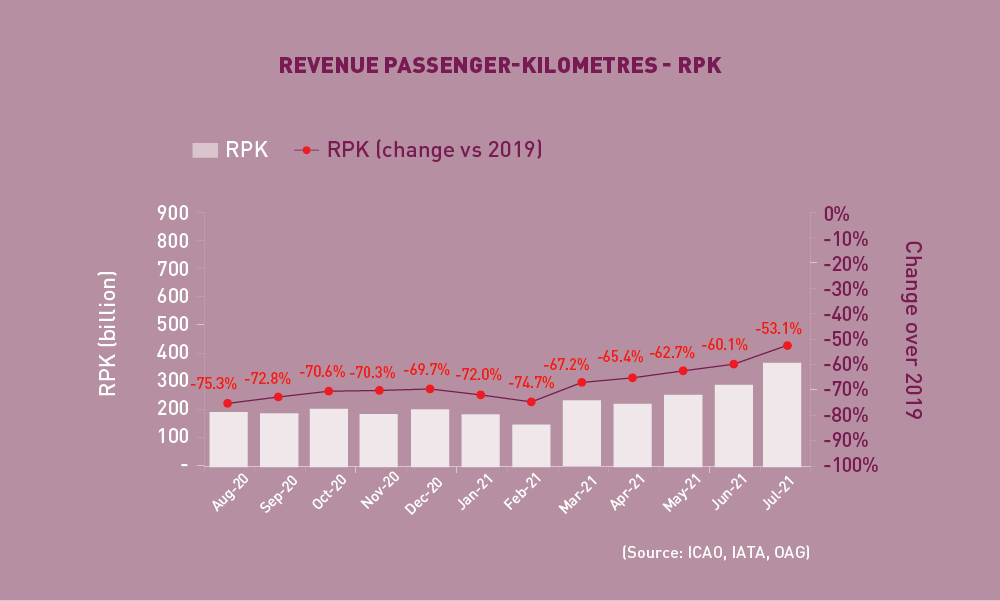 World passenger traffic fell by -53.1% in July 2021 (compared to 2019), +7.0 percentage points up from the decline in the previous month. The rebound of air travel was attributed to a combination of factors such as the traditional peak northern hemisphere summer travel, pent-up holiday travel demand, and progress in vaccine rollout globally. Nevertheless, the rapid spread of new variants poses risks to reversing the recovery trend. Domestic traffic continued to lead the recovery chart, with key domestic markets returning to above or close to pre-pandemic. 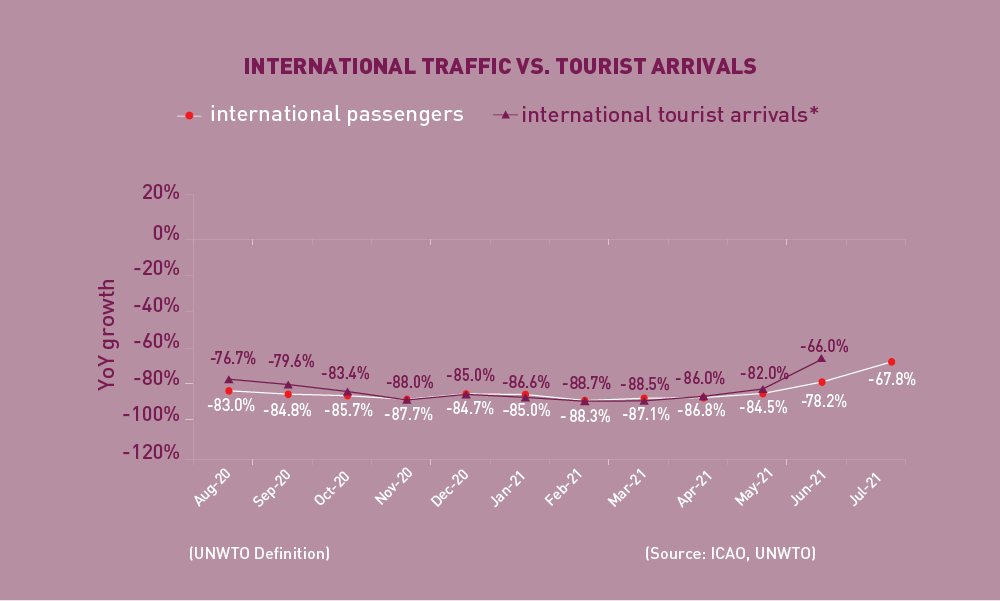 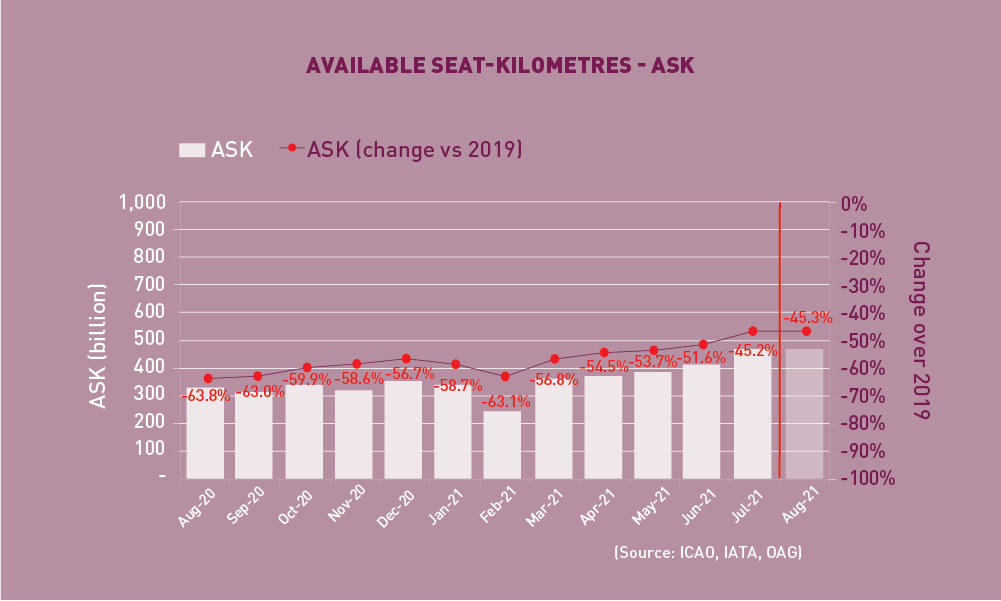 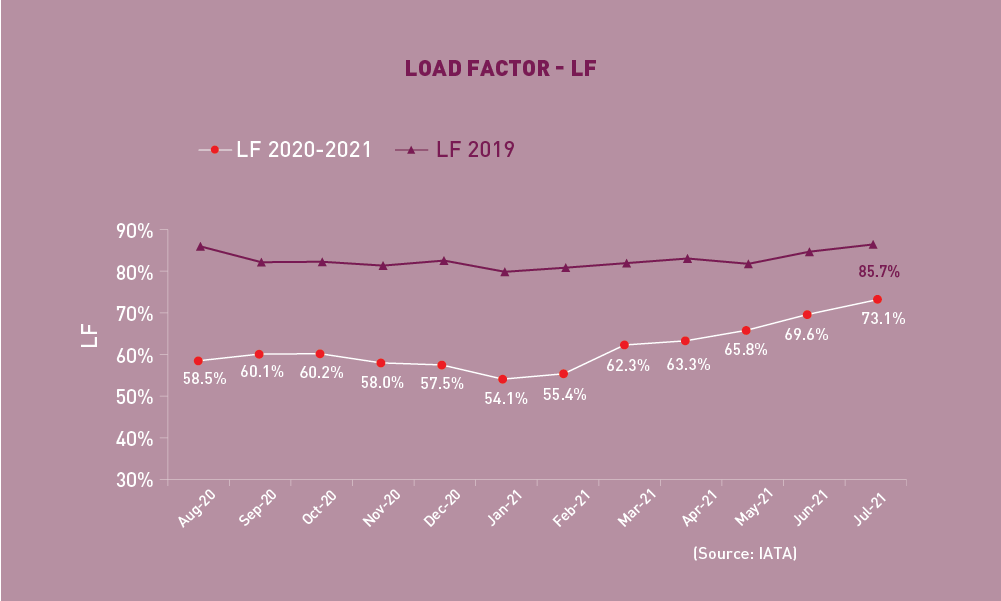 The passenger Load Factor reached 73.1% in July 2021, +3.5 percentage points higher than the previous month. The domestic load factor returned to the level of over 80%, outperforming the international load factor. As the recovery of capacity was faster than travel demand recovery, the July LF remained significantly below 2019 levels at -12.6 percentage points lower. 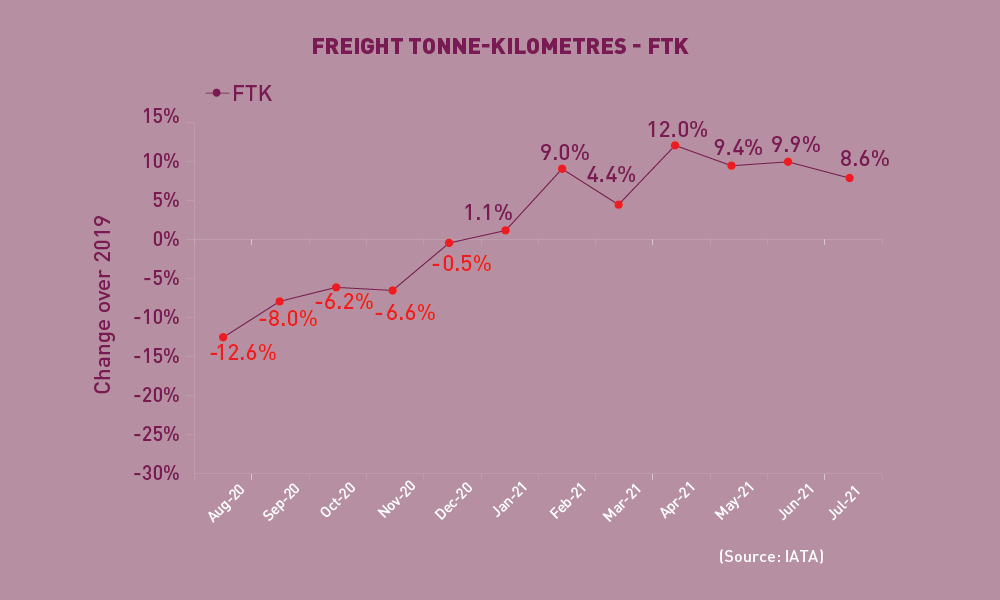 World freight traffic reported a growth of +8.6% in July 2021 (compared to 2019), -1.3 percentage points lower than the growth in the previous month. Despite a slight slowdown, the growth trend of air cargo remained strong broadly. The current state of supply chains and demand for businesses to restock inventories remains highly supportive to air cargo. Regional performance continued to vary from each other. North America and the Middle East posted the strongest growth double-digitally; Growth in Europe was solid although relatively moderate. For Asia/Pacific, the growth momentum started to show a sign of softening, while Latin America/Caribbean continued to be the only region posting negative growth. 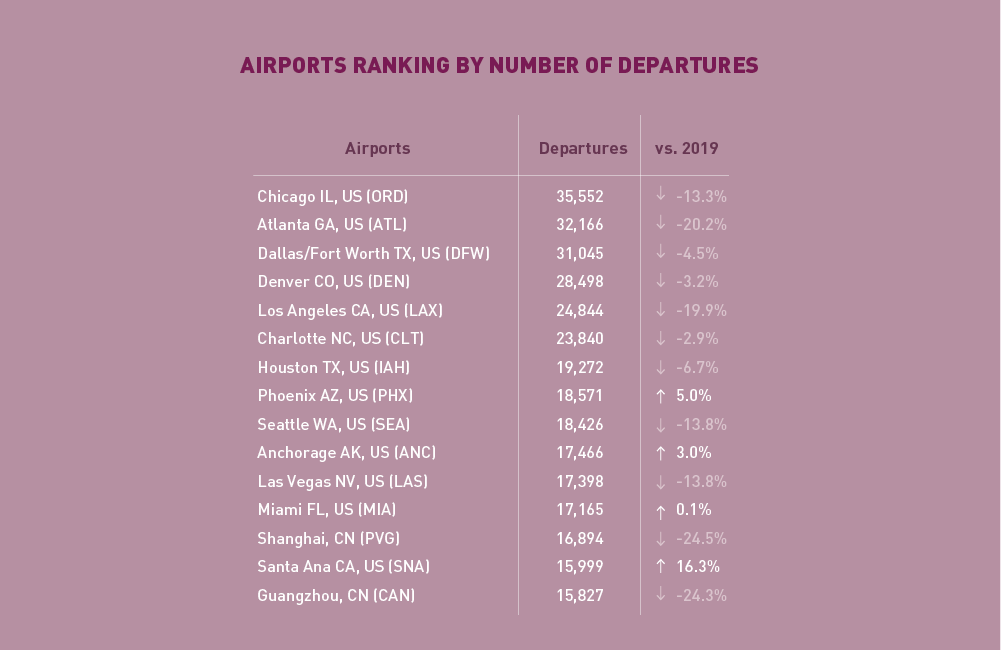 In terms of aircraft departures, the Top 15 airports reported a combined fall of -10.0%, compared to 2019. The Top 15 list consists mostly of US airports with two Chinese airports (Shanghai and Guangzhou). Chicago remained 1st with a decline of -13.3%. A few airports posted increases compared to 2019, with Santa Ana posting a double-digit growth of +16.3%. 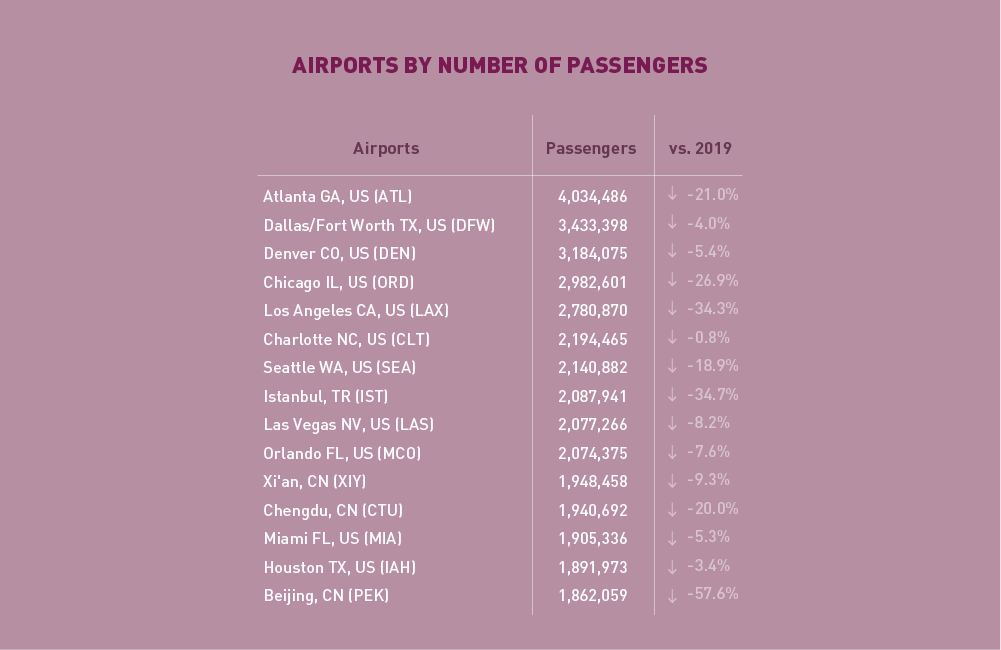 In terms of passengers, the Top 15 airports posted a total fall of -20.3%, compared to 2019. Similar to departures, the list is dominated by US and Chinese airports. Istanbul, for the first time of the year also ranked within Top 15. Atlanta remained at 1st with a decline of -21.0%, followed by Dallas/Fort Worth (-4.0%). The largest contraction was recorded by Beijing at -57.6%. 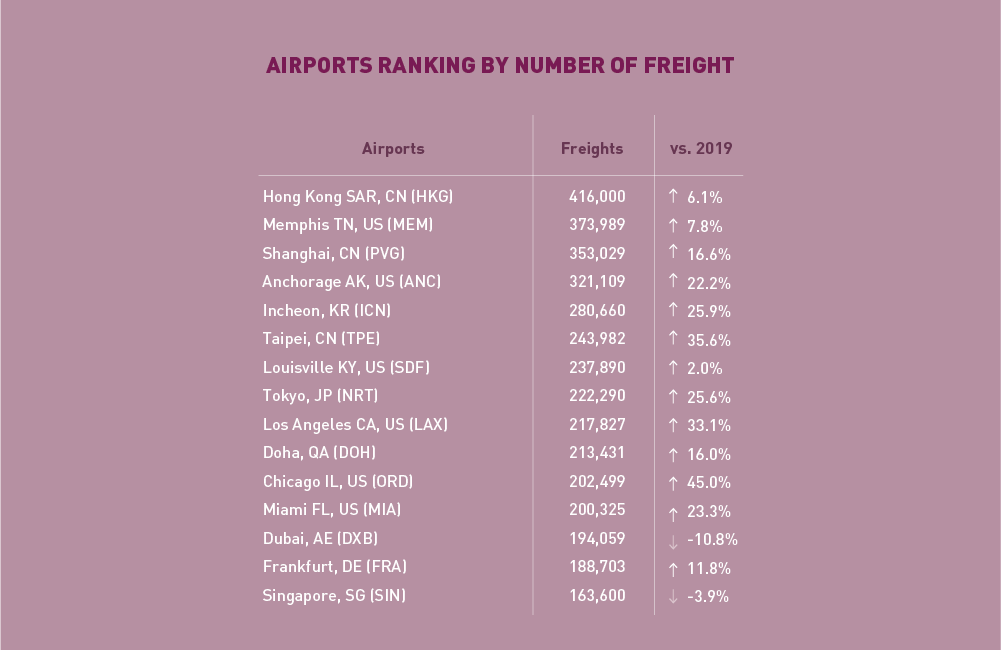 In terms of freight, the Top 15 airports reported an increase of +15.2%, compared to 2019. Dubai and Singapore were the only airports posting decline, at -10.8% and -3.9%, respectively. With an increase of +6.1%, Hong Kong retained the 1st position. For the sixth consecutive month, Chicago recorded the strongest increase at +45.0%. 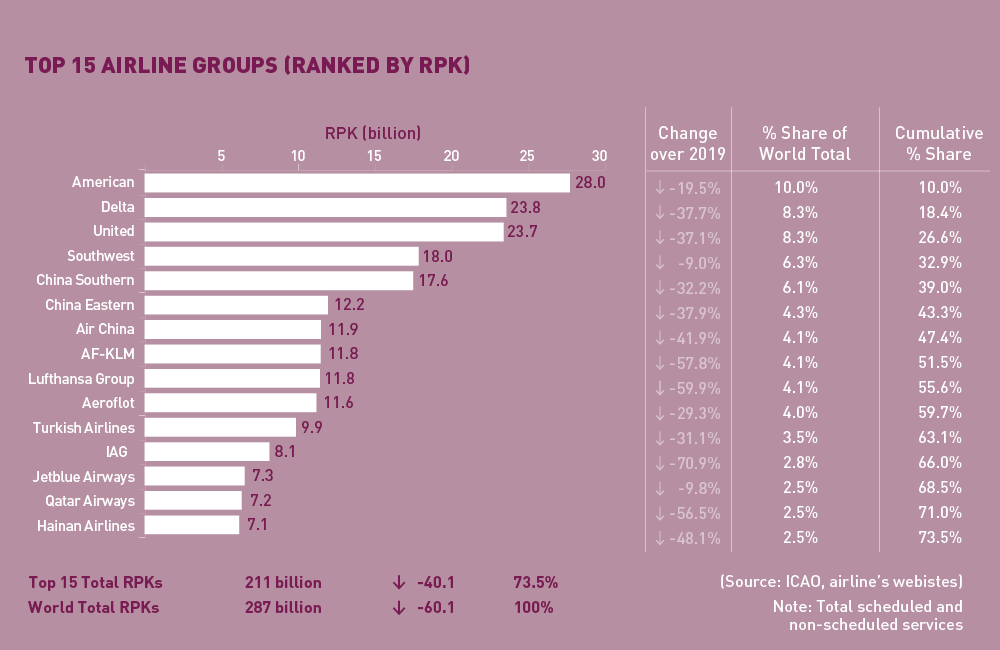 In terms of RPK, the Top 15 airline groups accounted for 73.5% of the world’s total RPK in July 2021 and declined by –40.1% compared to 2019. This decline was 20.0 percentage points smaller than the fall in world’s average RPK. Airlines with large domestic markets continued to lead the growth chart.

US airlines retained the Top 4 positions, and continued to improve, owing to the traditional northern hemisphere summer peak travel and also the busy July 4 long holiday weekend. American maintained 1st with a decline of -19.5% compared to 2019. Delta, United and Southwest kept at 2nd, 3rd and 4th, respectively.

After the substantial deterioration in June, Chinese domestic travel demand regained the growth momentum as travel restrictions were eased gradually. All Chinese airlines in the Top 15 showed a smaller fall. China Southern, China Eastern maintained the position of 5th and 6th, while Air China improved 1 position to 7th.

Airlines in Europe demonstrated stronger recovery compared to the previous month, supported by the pick up of intra-European travel. Nevertheless, the three major airline groups, AF-KLM, Lufthansa and IAG recorded the largest contractions among the Top 15. Aeroflot and Turkish Airlines showed better performance owing to their domestic demand.

Qatar Airways returned to the Top 15 and ranked 14th, albeit posting a large decline of -56.5%. 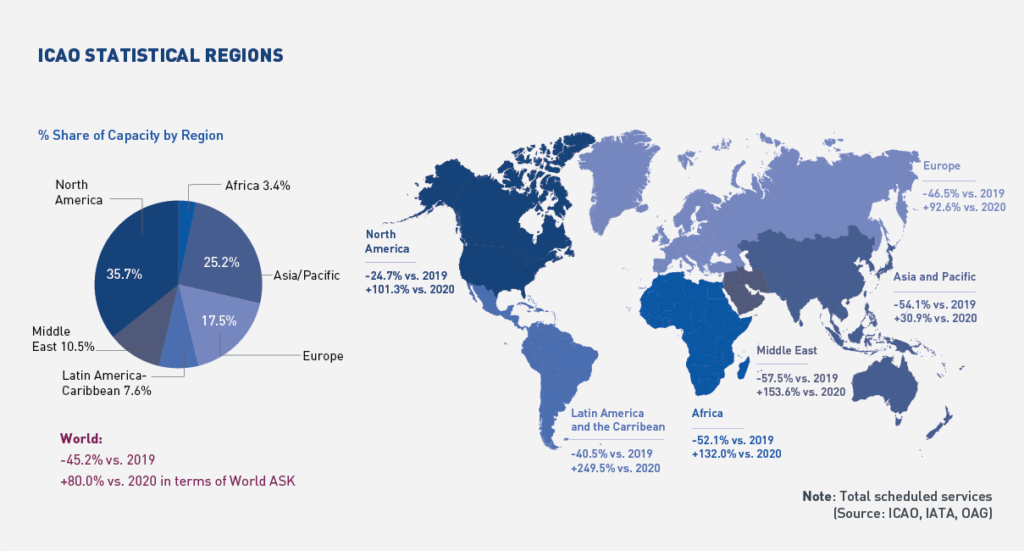 Worldwide capacity contracted by -45.2% in July 2021, compared to 2019. In line with the rising travel demand, seat capacity trended higher in all regions. The most significant increase was recorded by Europe as travel rebounded within Europe, both domestically and internationally. The Middle East also showed an increase benefiting from the slowly improving international travel demand.