The numbers that are shared in the article below reflect the situation as it was in July 2020. The analysis of the economic and aviation indicators we share here reflects the continuing impact of COVID-19 on this industry.

World Results and Analyses for June 2020 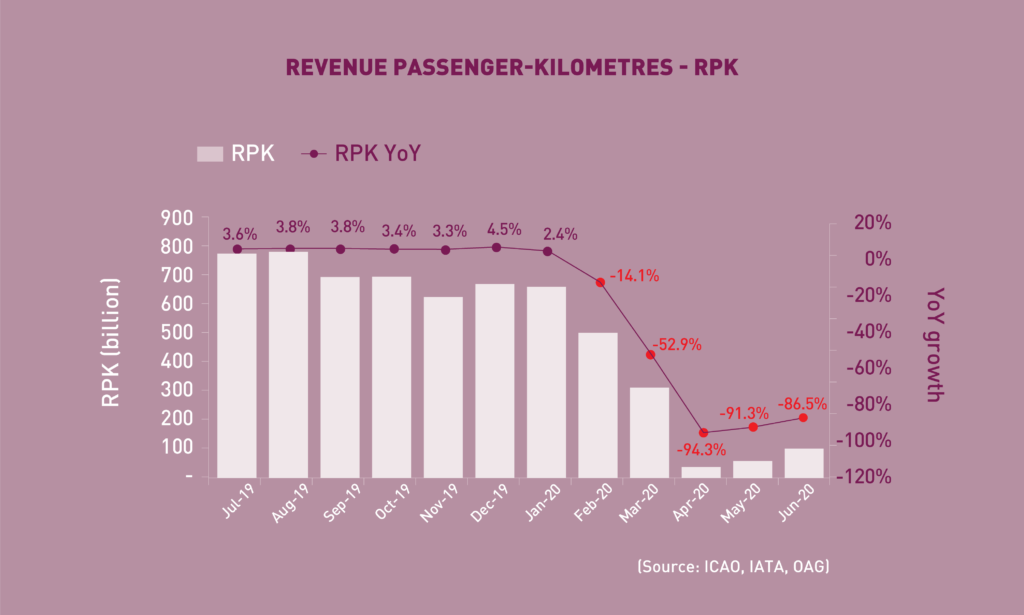 World passenger traffic fell by -86.5% YoY in June 2020, +4.8 percentage points up from the decline in the previous month. Air travel continued to show recovery from the trough in April, albeit with modest improvements. More countries started to relax lockdowns and travel restrictions, however limited to domestic open up. Consequently, the small upturn was mostly driven by domestic traffic. Speed of recovery varies across regions, with Asia/Pacific showing the most resilient rebound supported by the restart of key domestic markets, especially China. 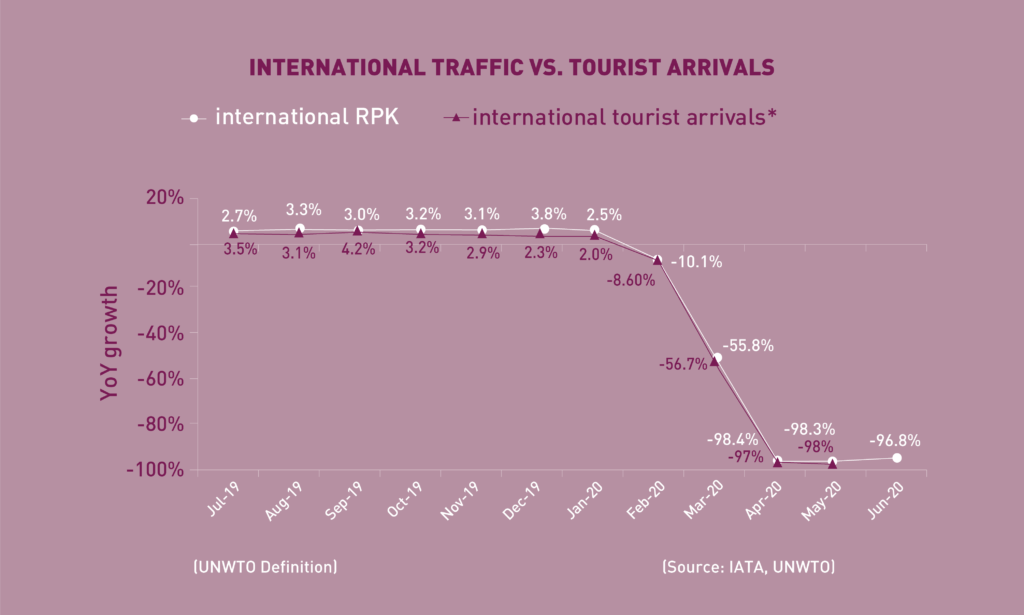 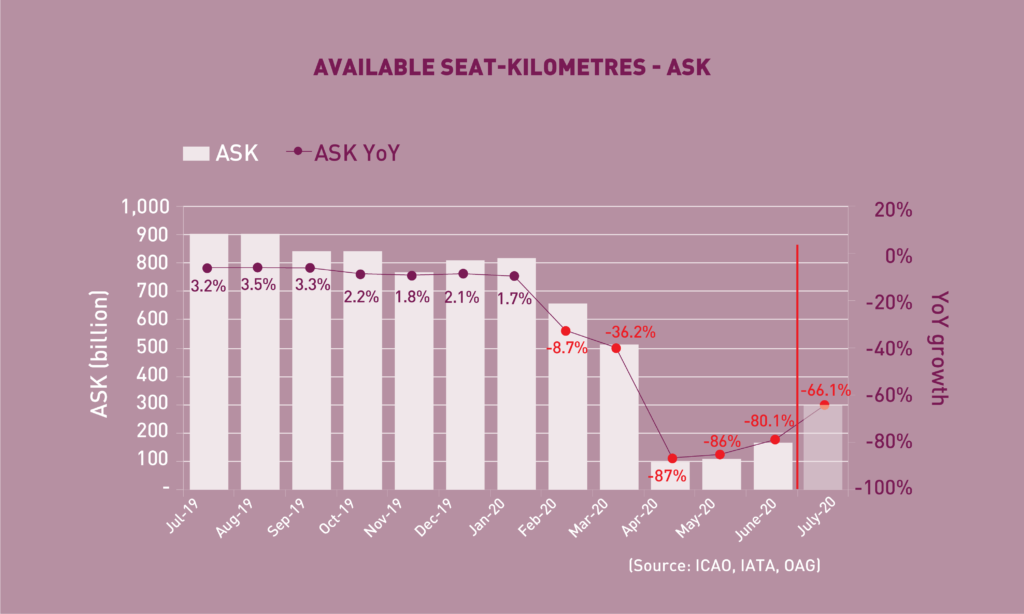 Capacity worldwide fell by -80.1% YoY in June 2020, +5.9 percentage points up from the decline in the previous month (-86.0%). With the gradual opening of markets and rise in demand for domestic travel as well as the signs of a pickup in international travel, world capacity is expected to increase in July to -66.1% down YoY. 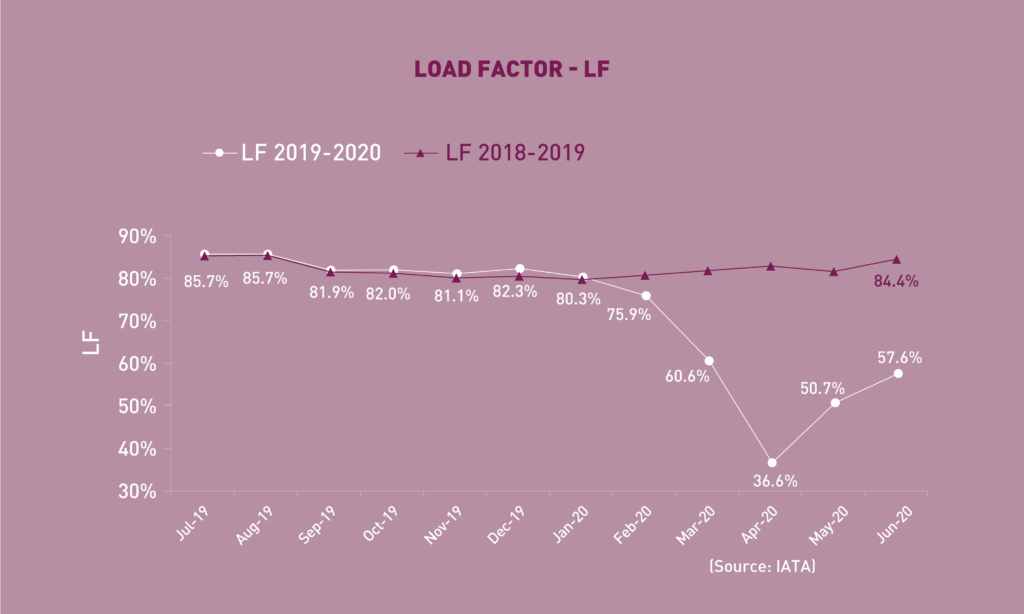 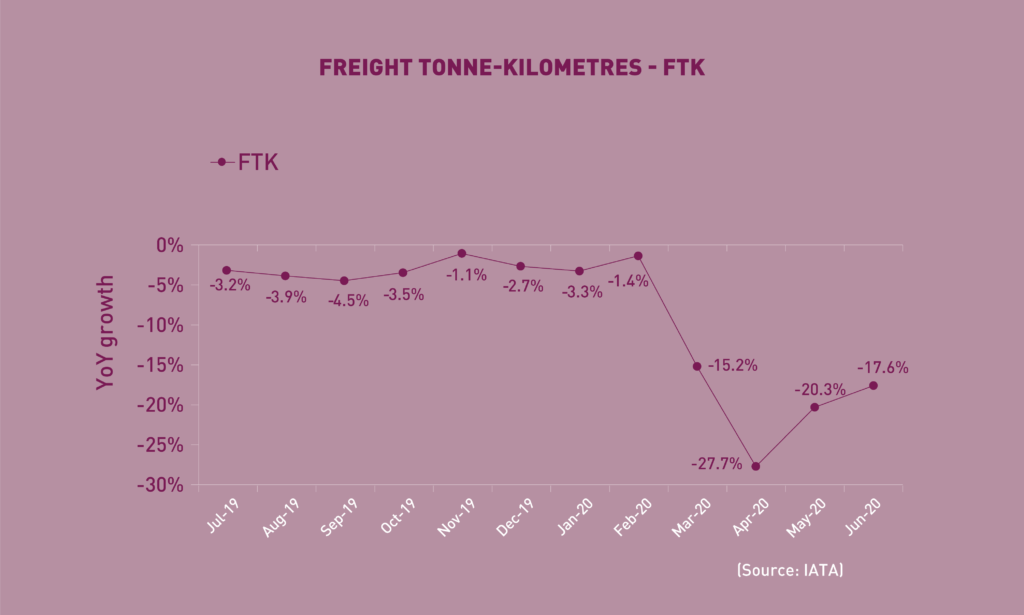 World freight traffic reported a decline of -17.6% YoY in June 2020, +2.7 percentage points up from the fall in the previous month. Improvements in air cargo demand continued into June, however, the pace of rebound unwound compared to May. The primary driver for sustaining air cargo resilience amid the most strict global lockdowns, i.e. urgent need of speedy transportation of medical supplies and PPE, has softened alongside the easing of wide-scale shortage. More demand including those of consumption goods began to shift to slower but cheaper means of transportation such as shipping by sea or rail. The performance of recovery by region was a mixed with slight upturn in North America, Europe and the Middle East, while deterioration in Asia/Pacific, Africa and Latin America/Caribbean. 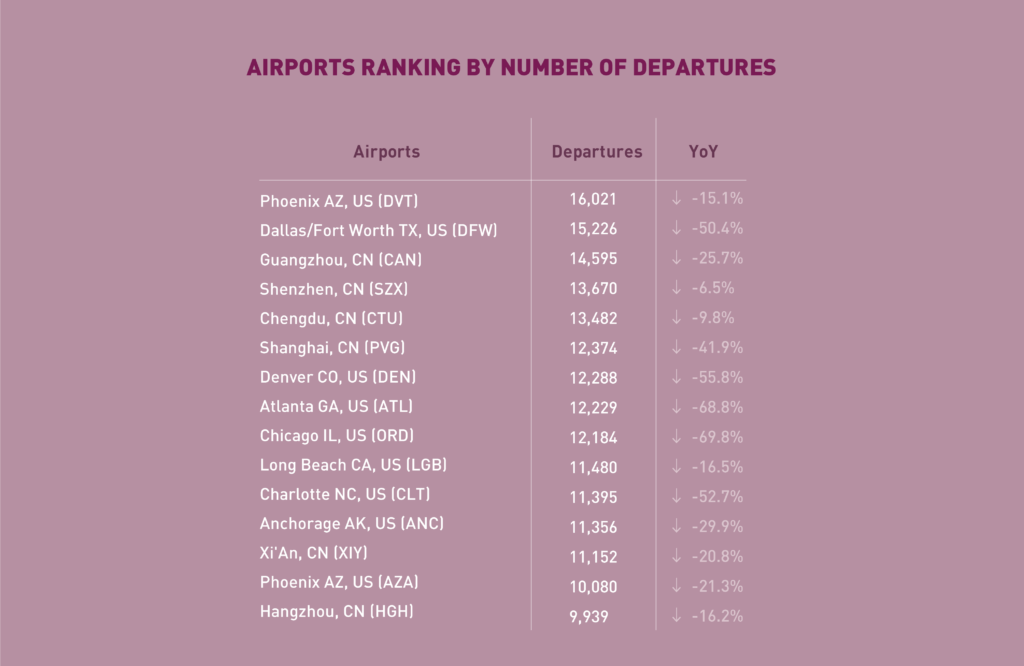 In terms of aircraft departures, all the Top 15 airports reported declines with a combined fall of -41.4% YoY. The Top 15 list comprised of only US and Chinese airports with Phoenix (Deer Valley) continuing to be 1st. Chicago recorded the most significant decline of -69.8%, followed by Atlanta. Two Chinese airports posted the smallest declines with less than -10% YoY. 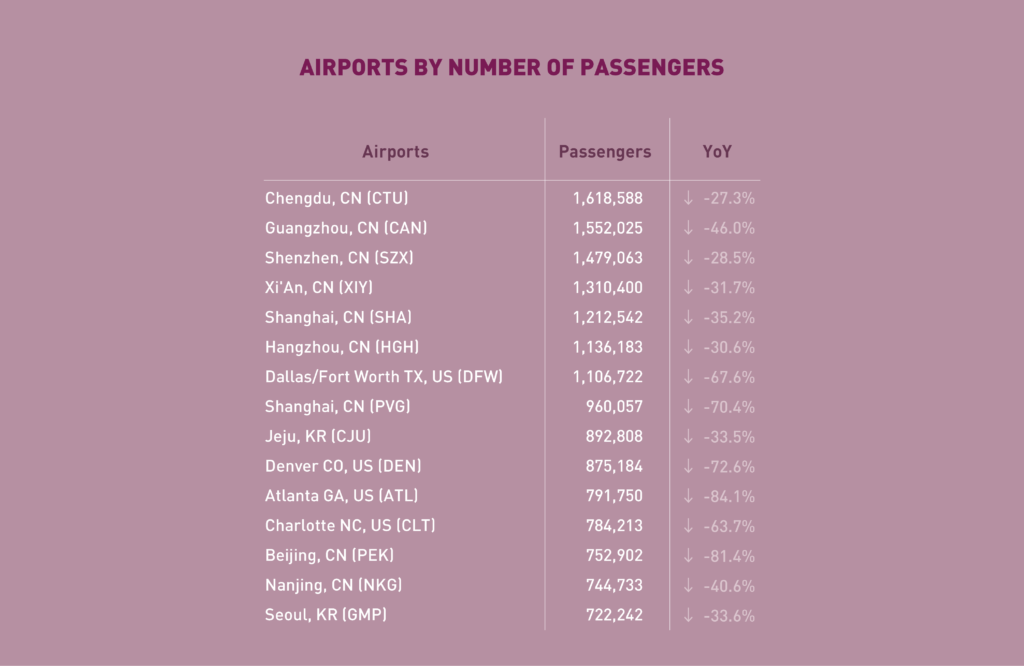 In terms of passengers, the Top 15 airports posted a staggering fall of -57.3% YoY. Eleven out of the Top 15 airports were in Asia/Pacific and mostly in China, owing to the gradual pickup of domestic traffic. Chengdu remained 1st with the smallest contraction of -27.3%, followed by Guangzhou. Beside Chinese airports, two Korean and US airports also ranked within the Top 15. 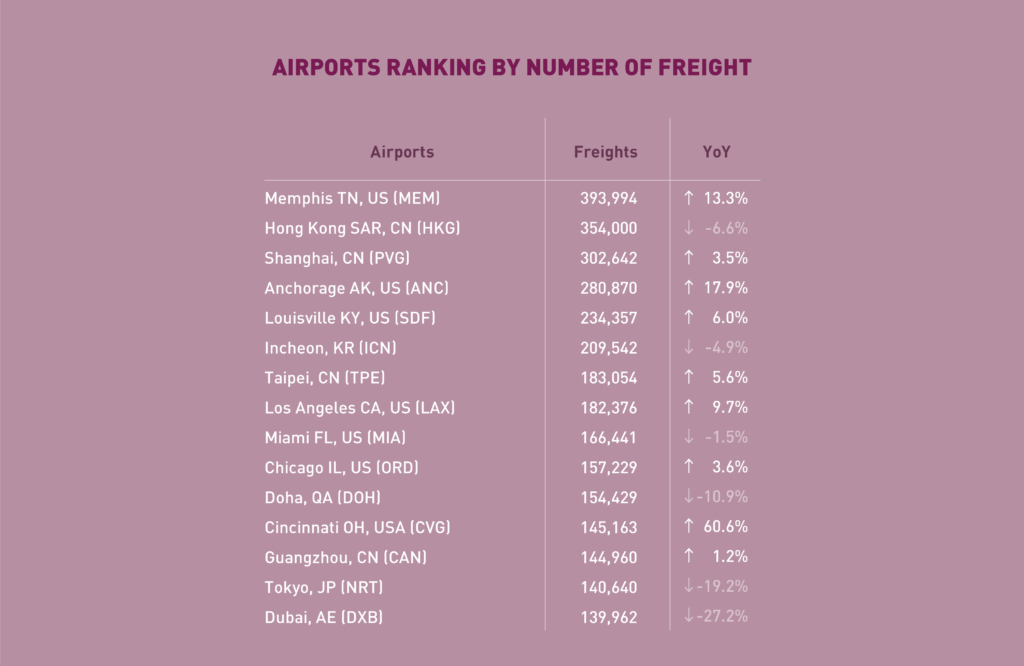 In terms of freight, the Top 15 airports reported a YoY increase of +1.8%. This was the first positive growth since March. Over half of the Top 15 posted YoY increase with the strongest growth being recorded by Cincinnati (+60.6%), owing to a surge in cargo loads into the DHL system. Memphis remained at 1st, followed by Hong Kong with a fall of -6.6%. 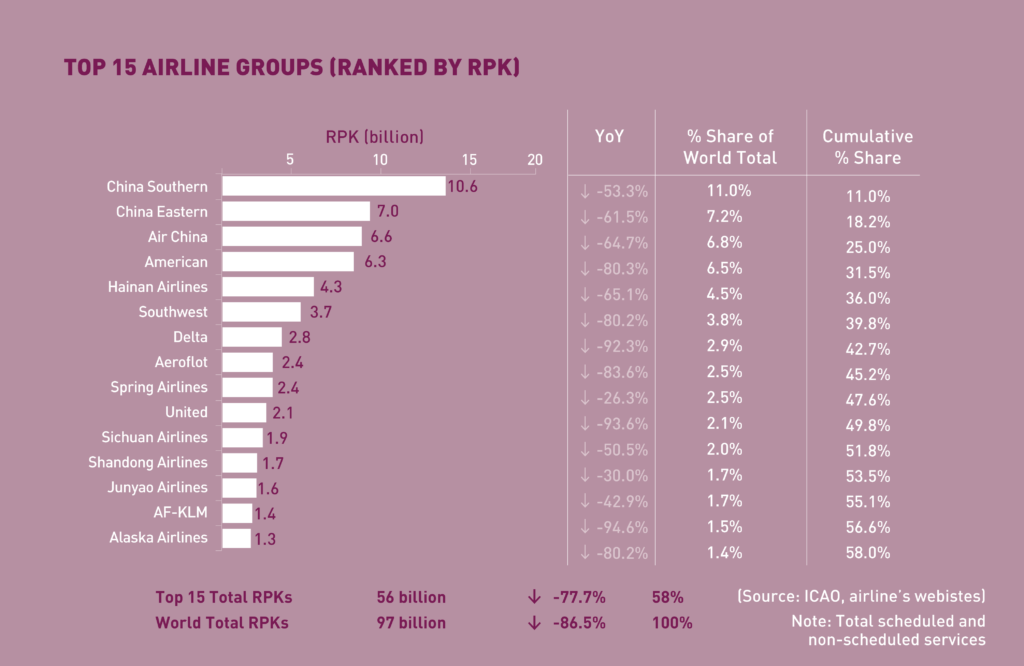 In terms of RPK, the Top 15 airline groups accounted for 58.0% of the world’s total RPK in June 2020 and declined by -77.7% YoY. This decline was 8.8 percentage points less than the world’s average on scheduled services, with contraction in traffic of all airlines in the Top 15. Ranking of the Top 15 airlines continued to be distorted due to the different recovery pace by region and country, nonetheless the same airlines as in May maintained in the list.

Chinese airlines dominated the chart supported by the sturdy recovery of domestic traffic in the country. China Southern, Air China, and China Eastern remained the Top 3 with traffic down ranging from -53% to -65% YoY. Hainan Airlines, Spring Airlines, Sichuan Airlines, Shandong Airlines and Junyao Airlines ranked at similar positions as the previous month at 5th, 9th, 11th, 12th and 13th, respectively. Spring Airlines has recorded the fastest improvement with traffic rebounded to 73.7% of the 2019 level.

Among the US airlines in the Top 15, American and Southwest recovered slightly faster although the improvements were still modest, and ranked 4th and 6th, respectively. While traffic level of Delta and United remained relatively unchanged compared to May. Alaska Airlines maintained the position of 15th.
Performance of airlines in Europe stayed subdued. Aeroflot registered a faster recovery due to resumption of domestic flights, and ranked up to 8th. AF-KLM further moved down to 14th with marginal improvements. 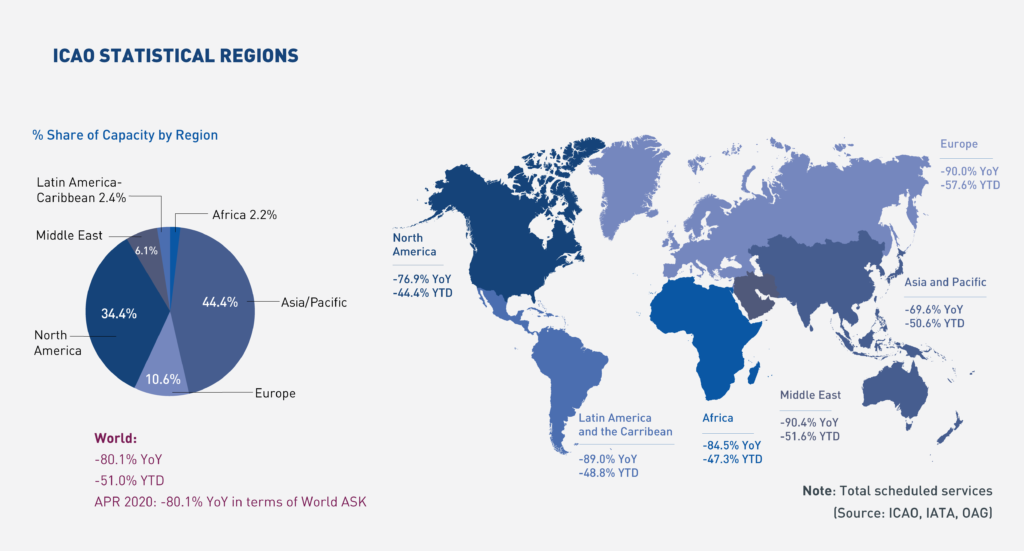 Worldwide capacity contracted by -80.1% YoY in June 2020. As more flights being resumed compared to May, capacity decline of all regions eased slightly with the exception of Africa.
The most resilient recovery was recorded by Asia/Pacific with capacity returned to 30% of the 2019 level. The slowest improvements were observed in Europe and the Middle East.