The numbers that are shared in the article below reflect the numbers in March 2022. The analysis of the economic and aviation indicators we share here reflect the continuing impact of COVID-19 on this industry.

World Results and Analyses for March 2022 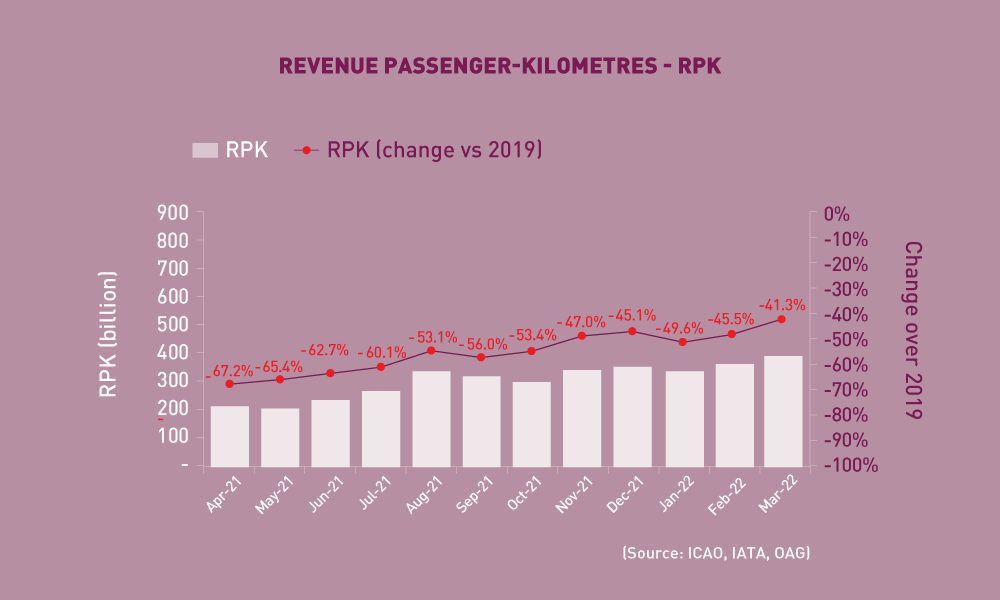 World passenger traffic fell by -41.3% in March 2022 (compared to 2019), +4.2 percentage points up from the decline in the previous month. The upward trend in air travel recovery since February was the result of the relaxation of restrictions against Omicron and the solid travel demand. The improvement in domestic air travel however weakened, mainly due to the significant fall in China’s domestic travel, impacted by the new lockdown and tightened travel restrictions. As the COVID-19 related restrictions are being eased, global air travel recovery is expected to continue. 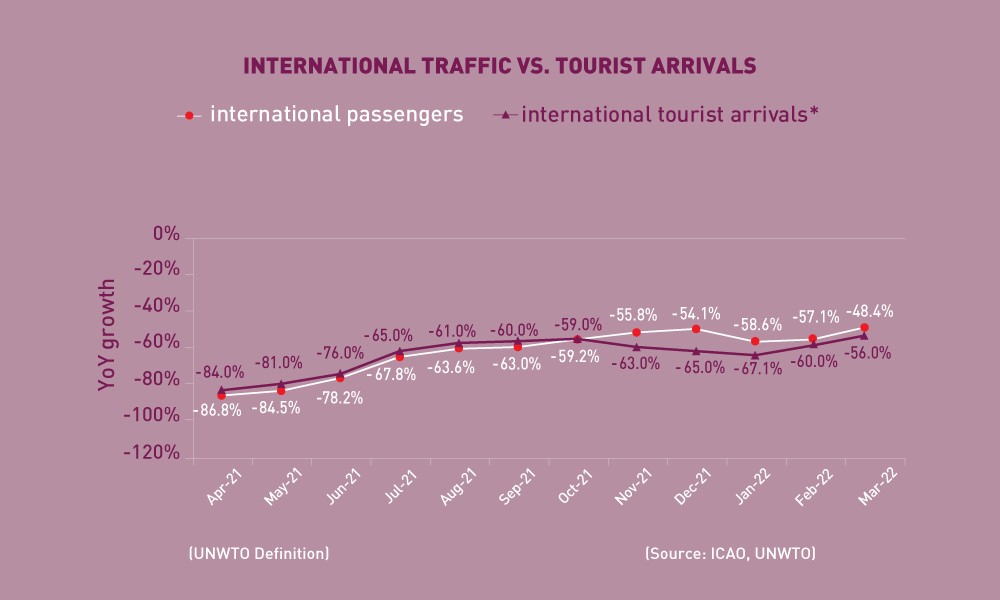 International passenger numbers fell by -48.4% in March 2022 (compared to 2019), +8.7 percentage points up from the decline in the previous month. International air travel recovery accelerated in all regions including Asia/Pacific, albeit at a slower pace. The strongest improvement was recorded by Europe, followed by the Middle East. 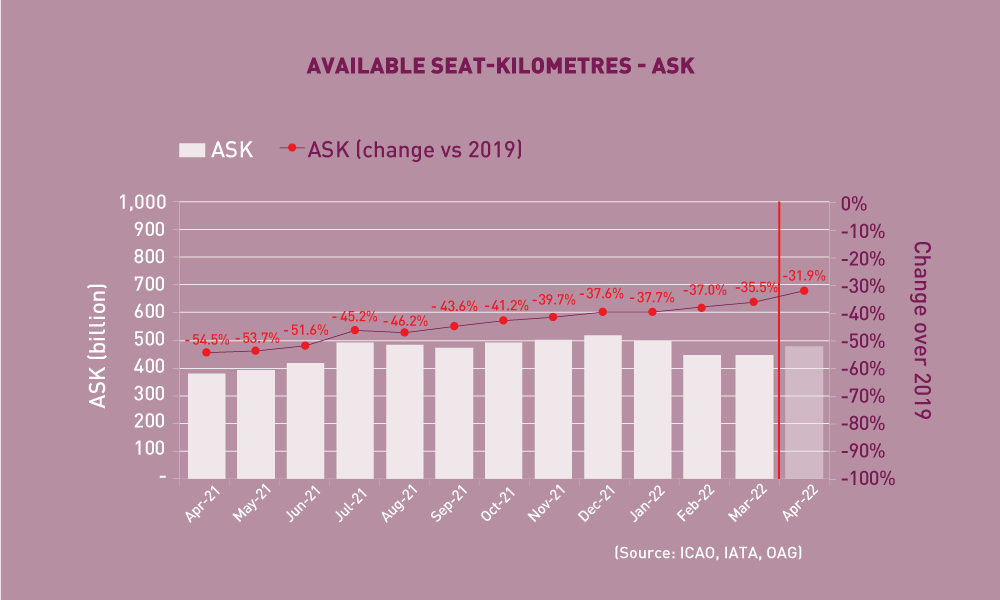 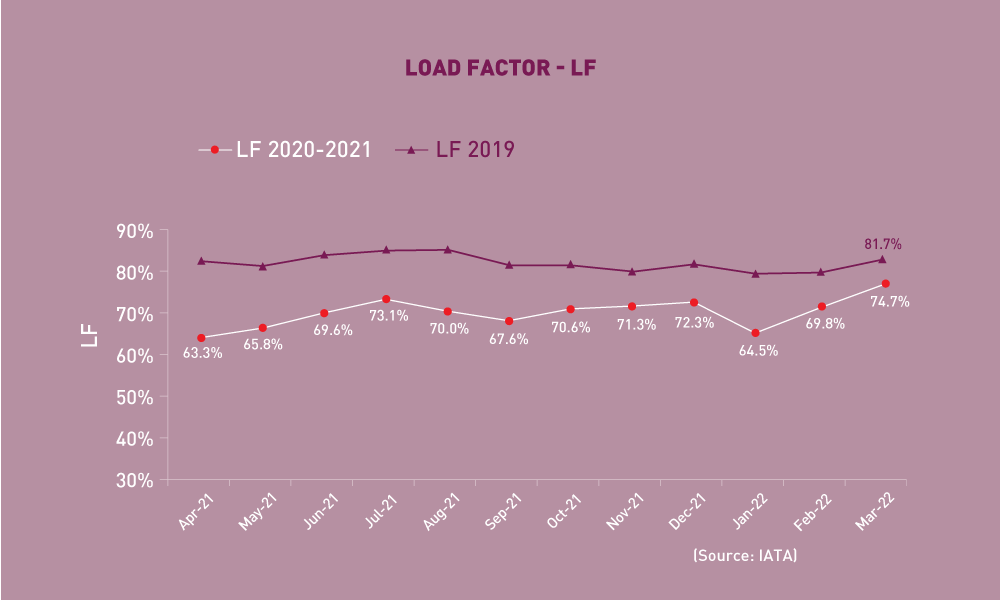 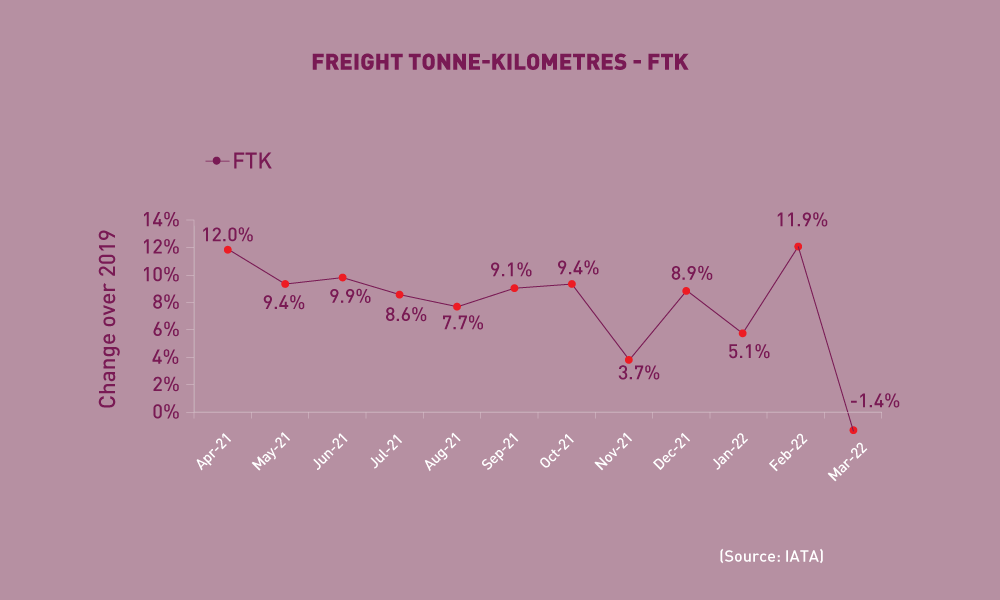 World freight traffic reported a decline of -1.4% in March 2022 (compared to 2019), -13.3 percentage points down from the growth in the previous month. For the first time since January 2021, air cargo recorded negative growth from the 2019 pre-crisis level. Unlike the passenger traffic, both the Omicron-related restrictions, especially in Asia/Pacific, and the Ukraine-Russia conflict have strongly impacted the global trade which in turn dampened the air cargo demand. Europe recorded the largest decline compared to the 2019 levels, followed by Asia/Pacific, Latin America/Caribbean and the Middle East. While Africa and North America remained above the pre-crisis levels, their growth slowed down substantially compared to the previous month. 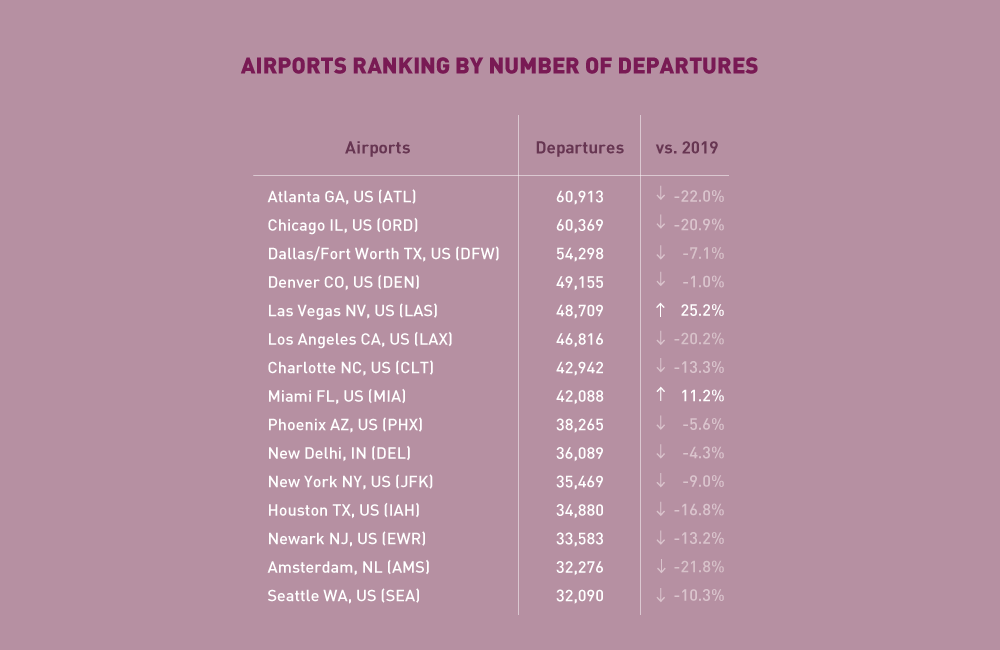 In terms of aircraft movements, the Top 15 airports reported a combined fall of -10.3%, compared to 2019. All but two of the Top 15 airports were US airports. Atlanta remained 1st with a decline of -22.0%. New Delhi and Amsterdam re-appeared in the Top 15, and the former posted the second smallest decline within the Top 15. Two airports posted increases, i.e. Las Vegas and Miami. 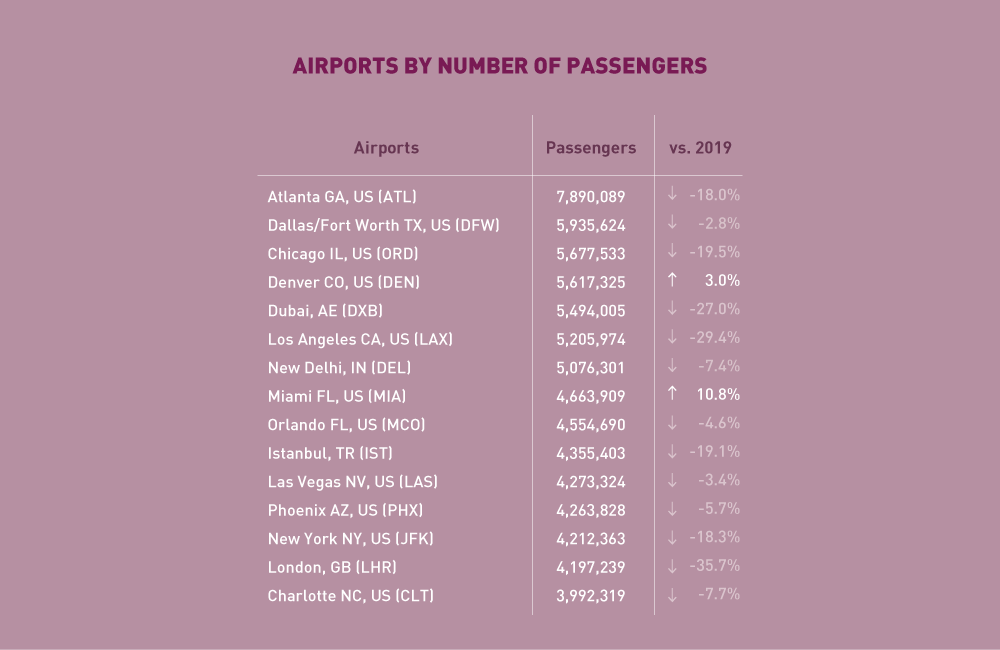 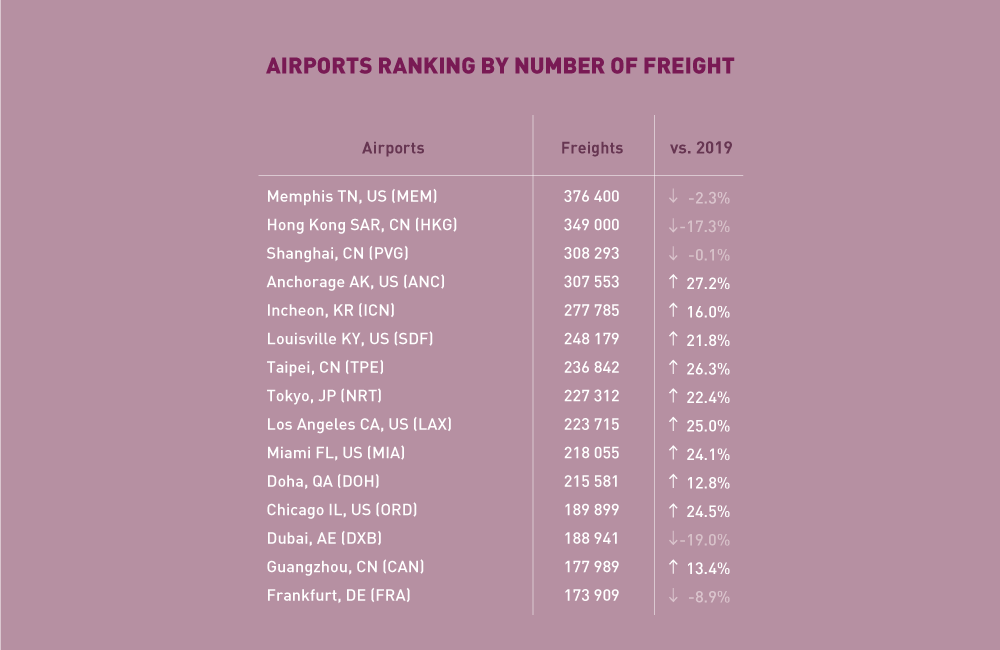 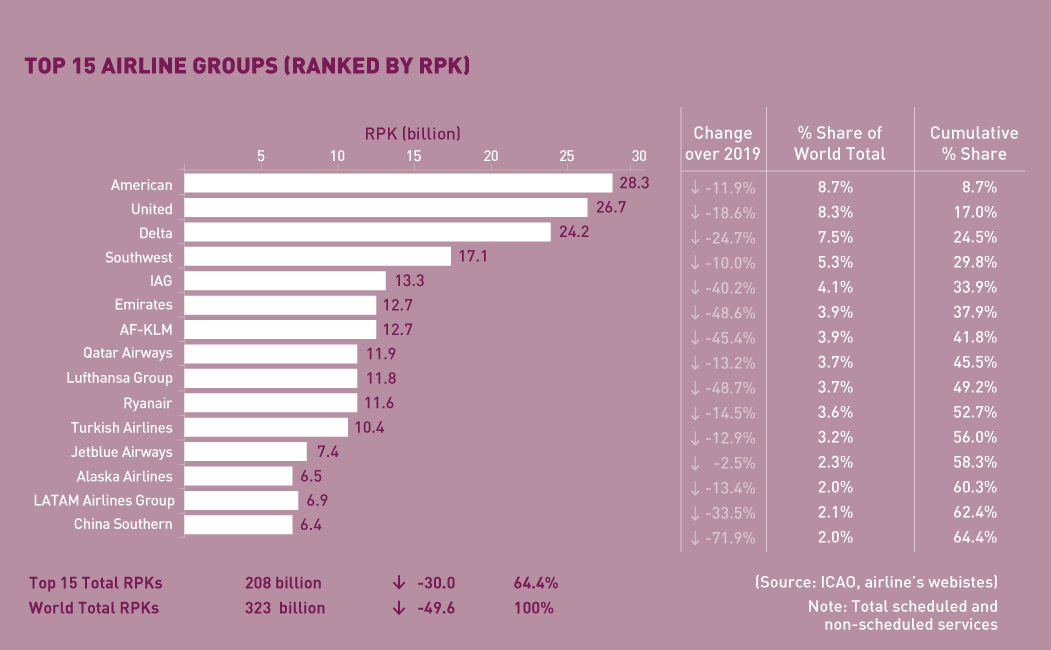 In terms of RPK, the Top 15 airline groups accounted for 59.7% of the world’s total RPK in March 2022 and declined by –30.0% compared to 2019. This decline was 19.6 percentage points smaller than the fall in world’s average RPK. Most airlines in the Top 15 showed smaller declines compared to February owing to the ease of travel restrictions.

The U.S. airlines retained the Top 4 positions, with American at 1st, followed by United, Delta and Southwest. With the solid recovery in domestic traffic, both Jetblue and Alaska ranked in the Top 15. Airlines in Europe continued to show improvements, especially in international traffic as the restrictions in the region have been gradually relaxed. IAG improved most noticeably and moved up 3 positions from 8th to 5th.

The Chinese domestic traffic experienced a sharp decline, impacted by lockdowns and tightened travel restrictions to control the spread of the Omicron variant. As a result, out of the major Chinese airlines, only China Southern retained its position within the Top 15.

The performance of airlines in the Middle East also improved. While Emirates maintained the 6th position, Qatar climbed 2 positions to 8th. 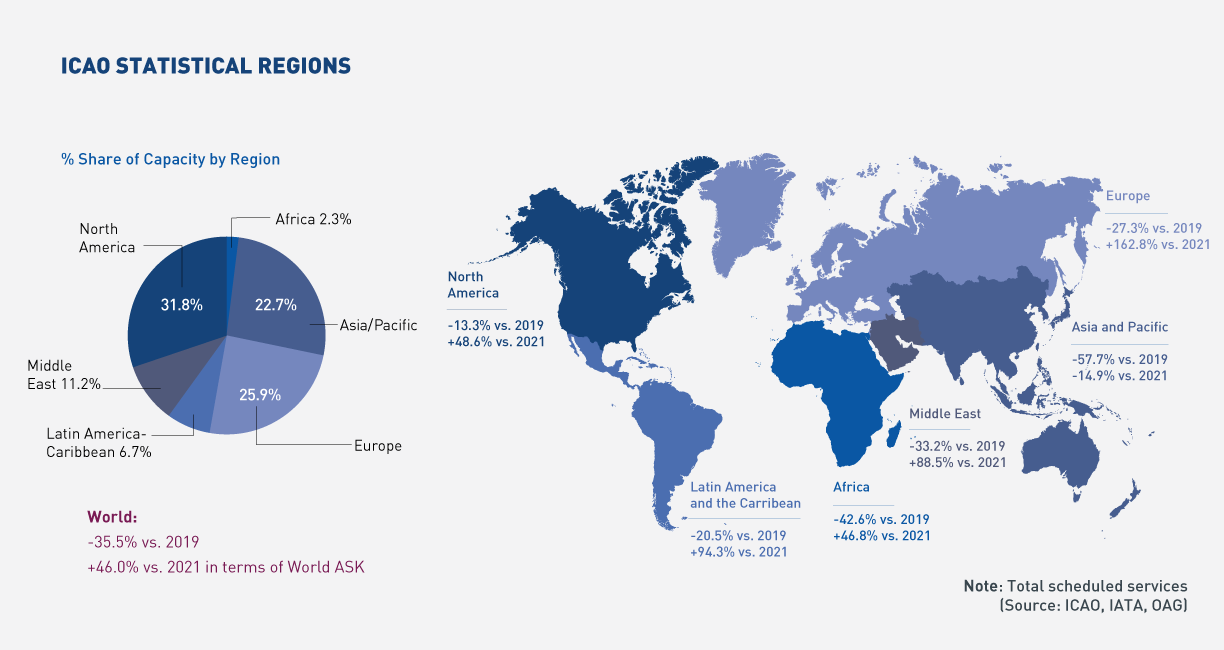 Worldwide capacity contracted by -35.5% in March 2022, compared to 2019. Passenger capacity continues to rebound as demand is returning along with the gradual ease of travel restrictions. North America demonstrated the most resilience with capacity approaching the pre-crisis level. Asia/Pacific continued to be the slowest recovering region, and was the only region experiencing deterioration.