The Air Transport Monthly Monitor for May 2021

The numbers that are shared in the article below reflect the numbers in March 2021. The analysis of the economic and aviation indicators we share here reflect the continuing impact of COVID-19 on this industry.

World Results and Analyses for March 2021 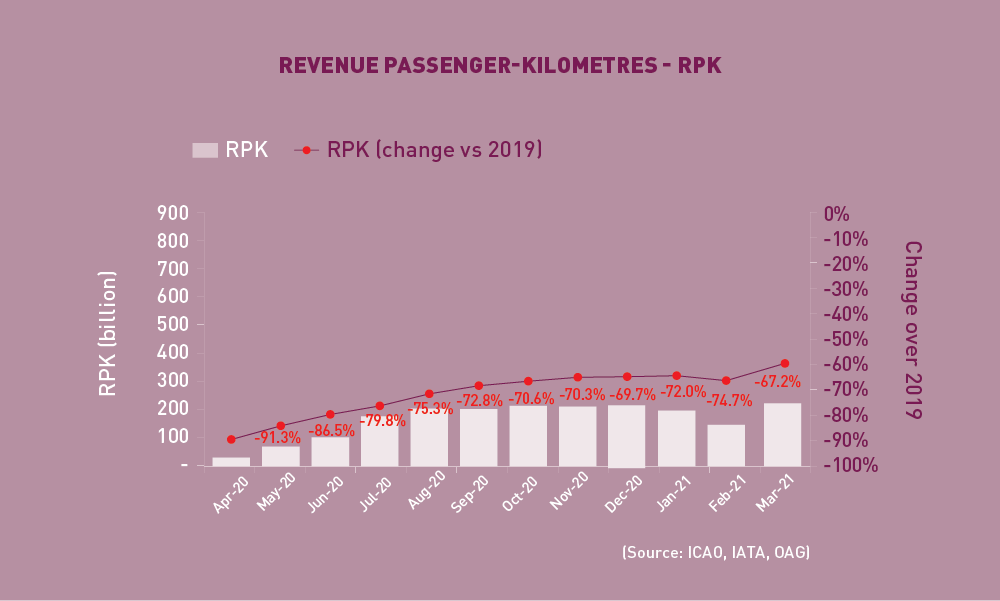 World passenger traffic fell by -67.2% in March 2021 (compared to 2019), +7.5 percentage points up from the decline in the previous month. After two consecutive months of deterioration, passenger traffic picked up, driven by the rebound in domestic demand, particularly in China where lockdowns and travel restrictions have eased. The pace of recovery diverged across regions. Whereas Africa and Latin America/Caribbean slowed down, the other regions showed improvements, especially in Asia/Pacific and North America. 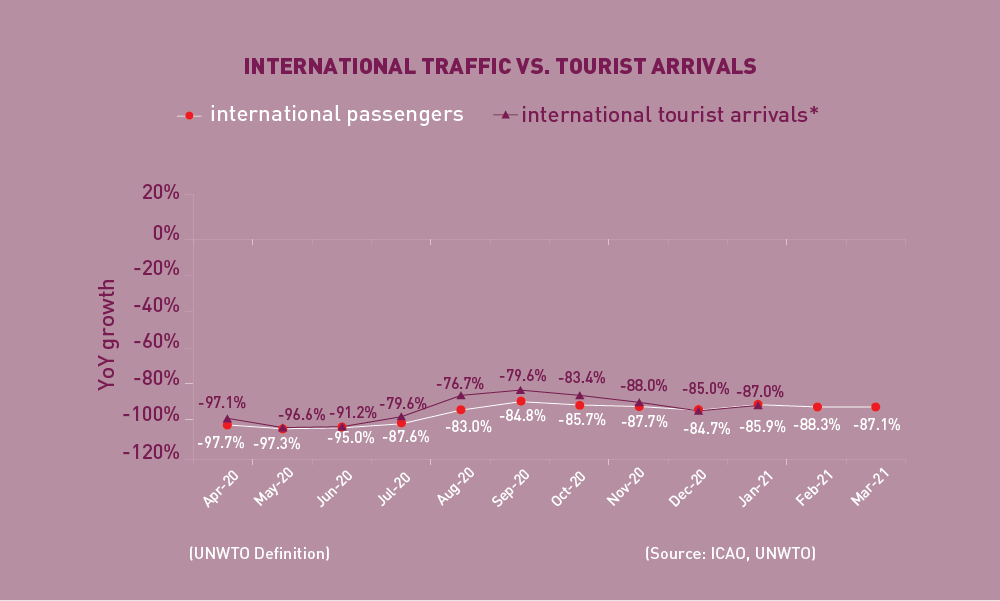 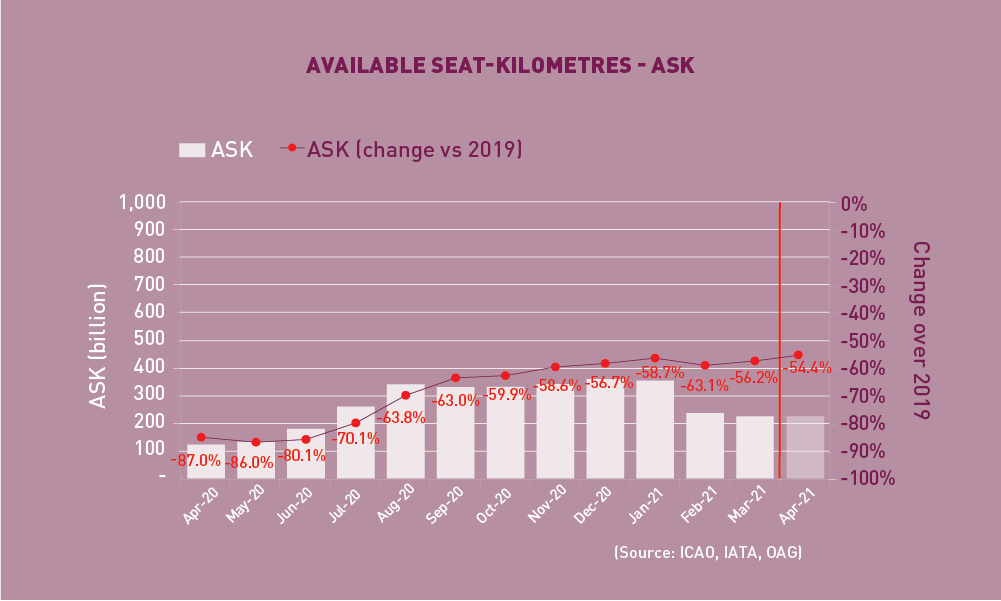 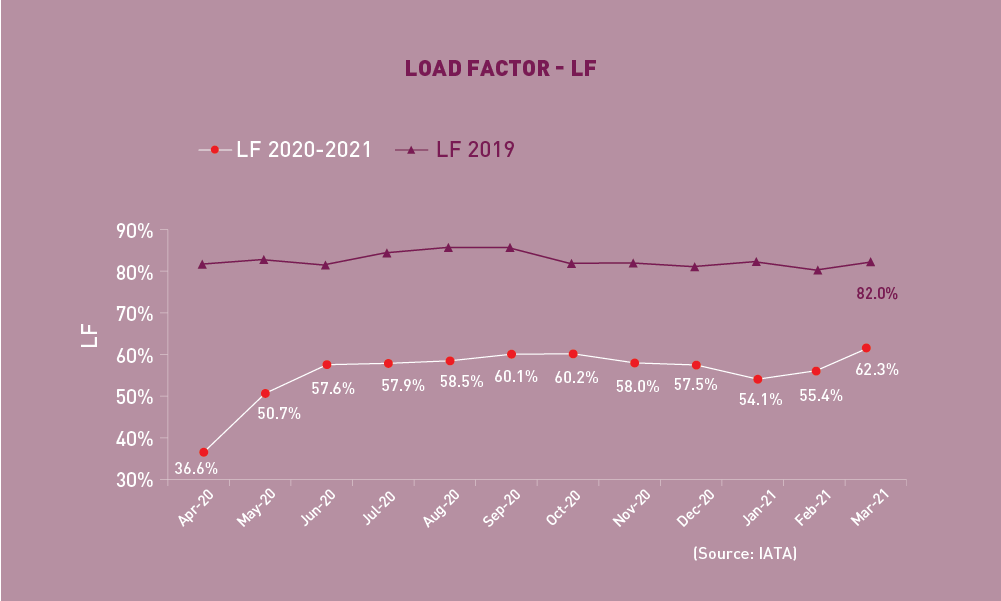 The passenger Load Factor reached 62.3% in March 2021, +6.9 percentage points higher than the previous month. Asia/Pacific and North America were the main contributors to the load factor improvements. As air travel demand fell faster than capacity, the March LF was -19.7 percentage points lower than the rate in the same period of 2019. 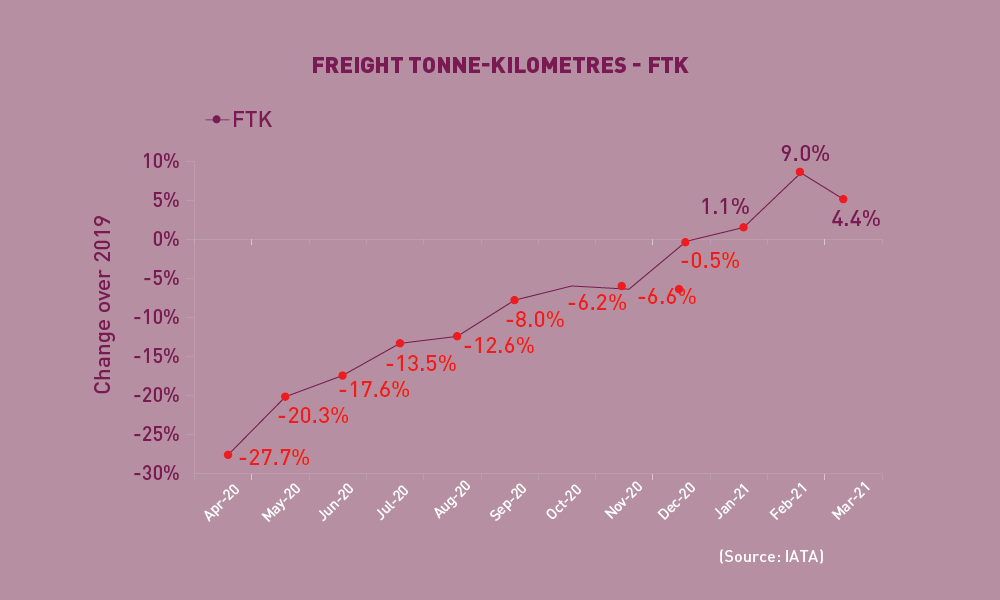 World freight traffic reported a growth of +4.4% in March 2021 (compared to 2019), -4.6 percentage points lower than the growth in the previous month. Albeit with a softened growth rate, air cargo demand remained strong, supported by the gradual rebound in global economic activity and increase in export. All regions, except for the Middle East and North America, showed a moderation in freight traffic expansion, with noticeable slowdown in Africa and Asia/Pacific. Nevertheless, Africa still grew rose double-digitally and topped the growth chart, followed by North America. Asia/Pacific and Latin America/Caribbean were the only regions posting contractions from 2019 levels, with the latter recording the weakest performance. 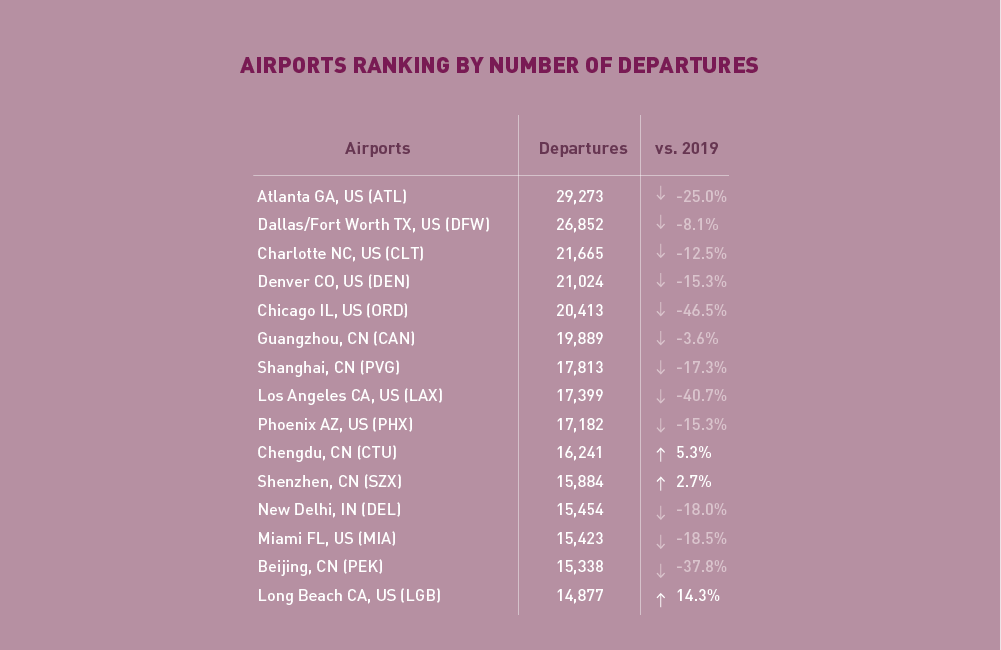 In terms of aircraft departures, the Top 15 airports reported a combined fall of -19.6%, compared to 2019. A few airports posted positive growth, particularly Long Beach which increased double-digitally. Two Chinese airports, Chengdu and Shenzhen also rose +5.3% and +2.7%, respectively.  Atlanta retained the 1st position with a decline of -25.0%. 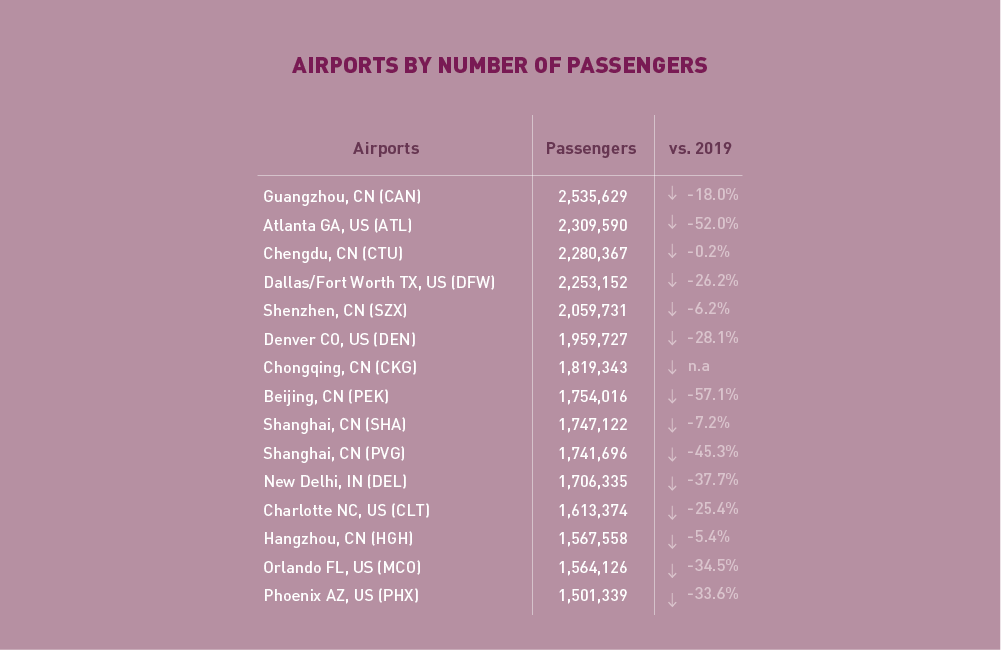 In terms of passengers, the Top 15 airports posted a total fall of -31.0%, compared to 2019. Passenger traffic remained below 2019 levels for all Top 15 airports. Nevertheless, some Chinese airports showed faster recovery with Chengdu posting the smallest contraction at -0.2%. Guangzhou regained the 1st position with -18.0% decline, followed by Atlanta, albeit with a larger fall at -52.0%. 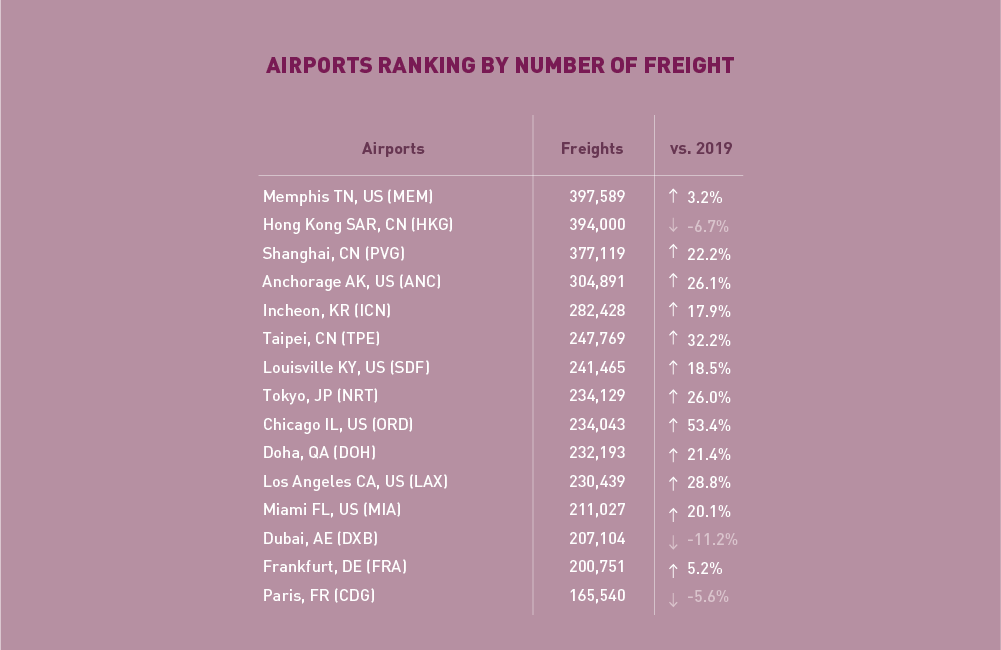 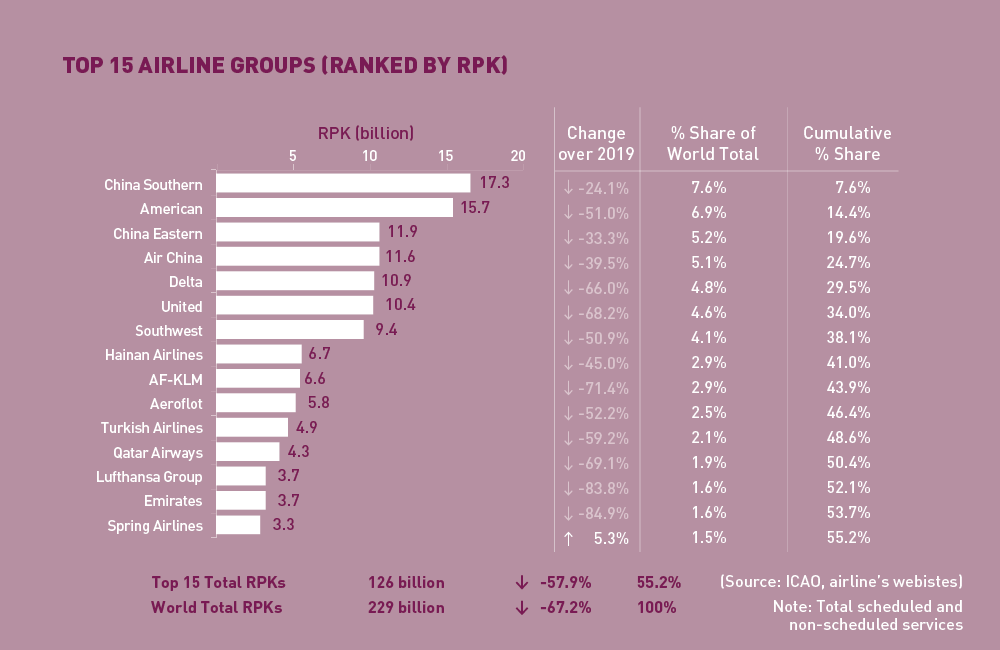 For the first time since April 2020, a positive growth from the pre-COVID-19 levels emerged among Top 15 airlines. Airlines in countries with large domestic markets continued to lead the growth chart.

All US airlines posted improvements supported by rapid vaccination progress. American ranked 2nd, outpacing other US airlines in the Top 15. Delta and United moved down to 5th and 6th, while Southwest maintained the 7th position.

Airlines in Europe continued to show slower recovery. Lufthansa and KLM posted the second and third largest contraction and remained at over 70% and 80% below 2019 levels, respectively. Aeroflot and Turkish Airlines showed slightly better performance at 50-60% down from 2019. Two airlines in the Middle East, Qatar and Emirates ranked 12th and 14th, respectively, while the latter posted the largest decline from 2019. 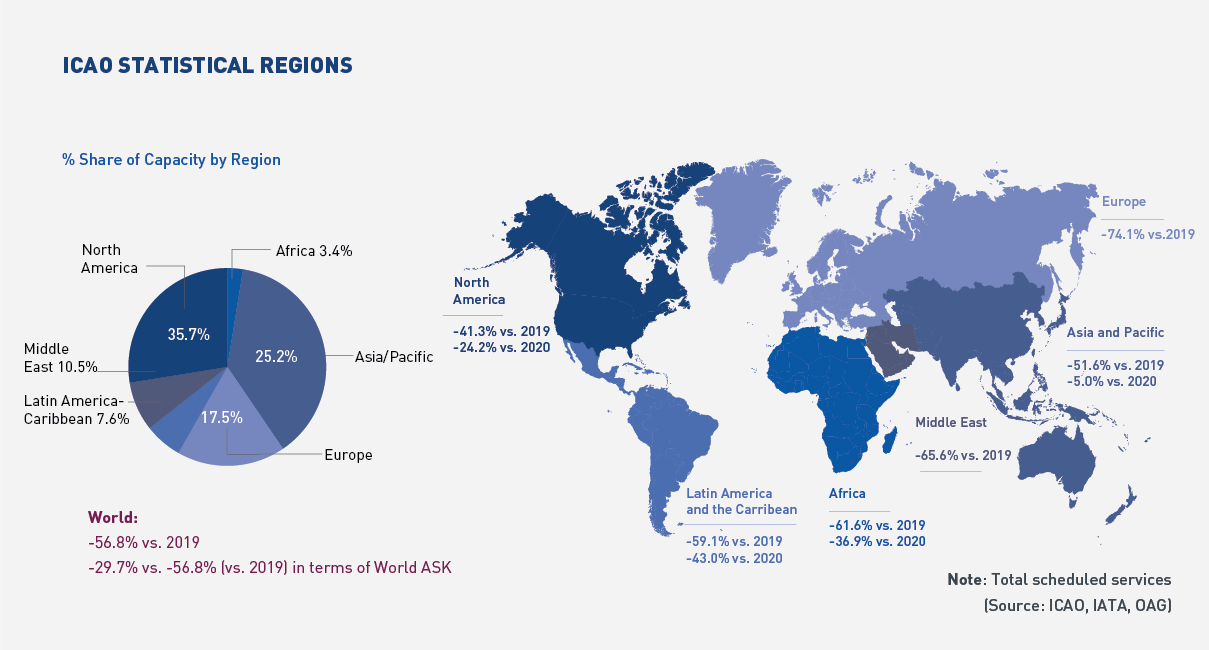 Worldwide capacity contracted by -56.8% in March 2021, compared to 2019. All regions, except for Africa and Latin America/Caribbean, saw smaller declines in capacity compared to the previous month. The most noticeable increase was recorded in Asia/Pacific, owing to the rebound of China domestic demand. Capacity offered in Europe continued to be far below 2019 levels.