The Air Transport Monthly Monitor for May 2020

The numbers that are shared in the article below reflect the situation as it was in March 2020. The analysis of the economic and aviation indicators we share here reflects the continuing impact of COVID-19 on this industry.

World Results and Analyses for March 2020 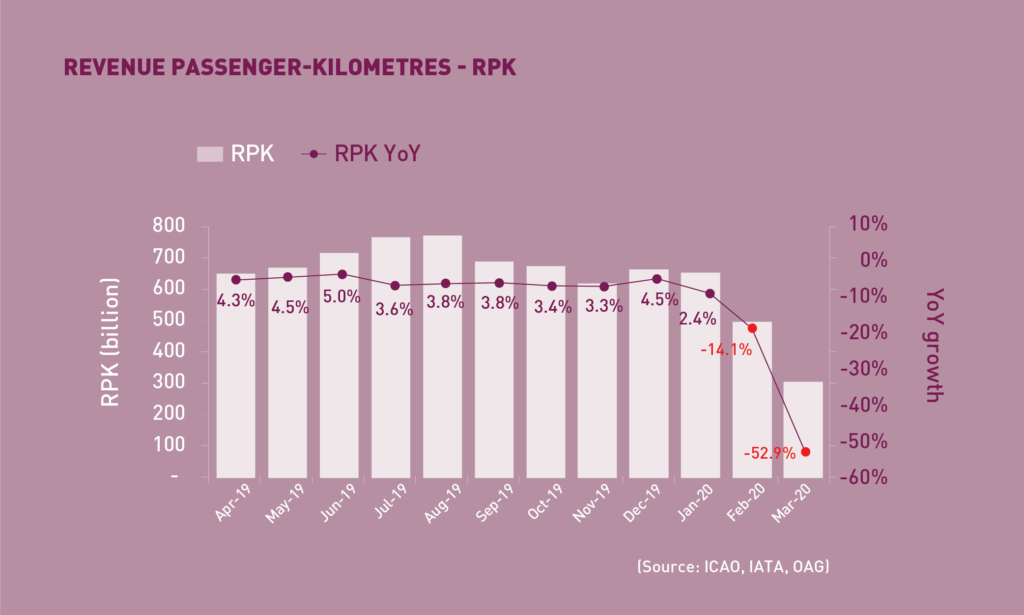 World passenger traffic fell by -52.9% YoY in March 2020, -38.8 percentage points lower than the decline in the previous month. This abrupt slump has far exceeded the level seen in the aftermath of 9/11. Global air travel demand was heavily impacted by the stringent travel restriction imposed by governments to contain the COVID-19 spread. All regions contributed negatively to the traffic result, with the most precipitous contraction in Asia/Pacific and Europe. China continued to be the weakest performing domestic market, followed by Japan and United States. 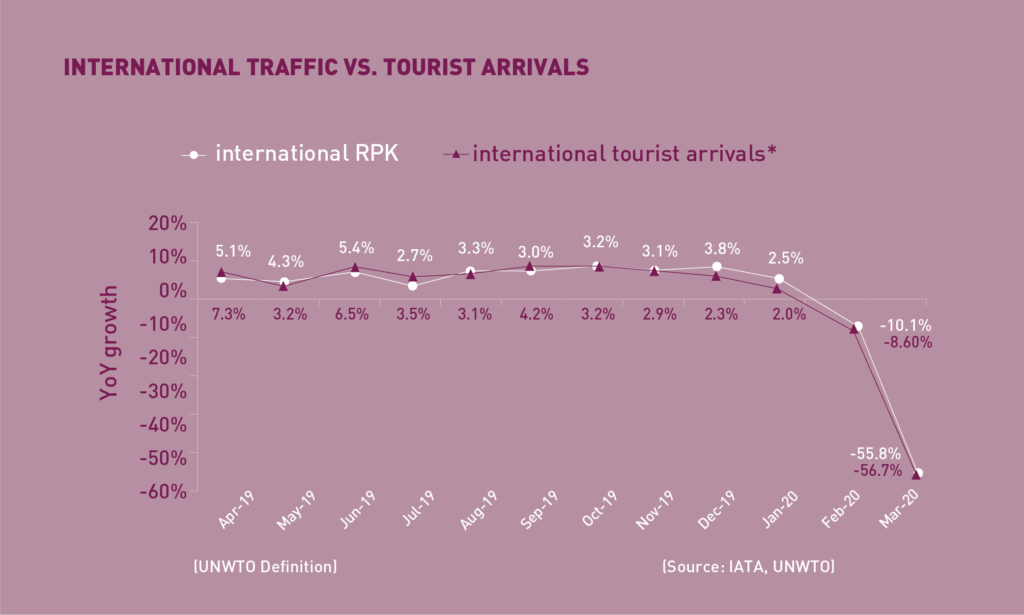 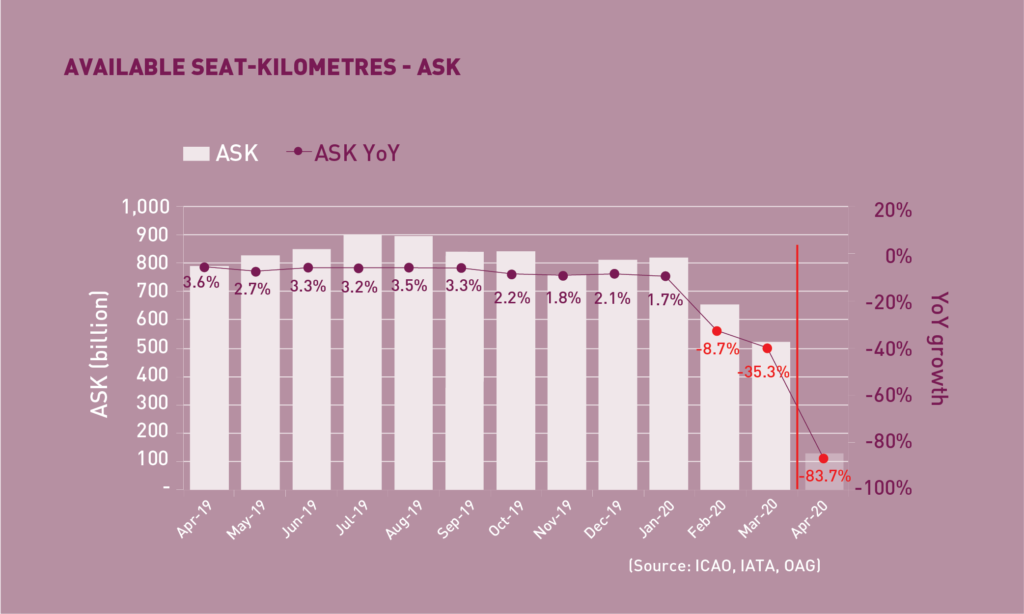 Capacity worldwide fell by -36.2% YoY in March 2020, -27.5 percentage points lower than the decline in the previous month (-8.7%). With the growing spread of the COVID-19 outbreak and extension to a global pandemic, world capacity is expected to further reduce by -83.7% in April 2020. 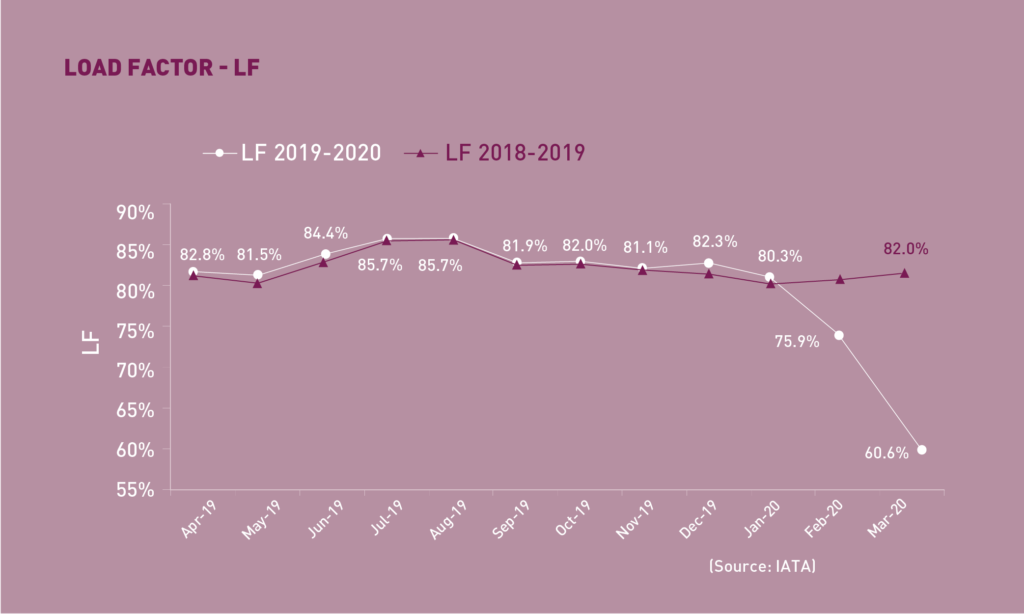 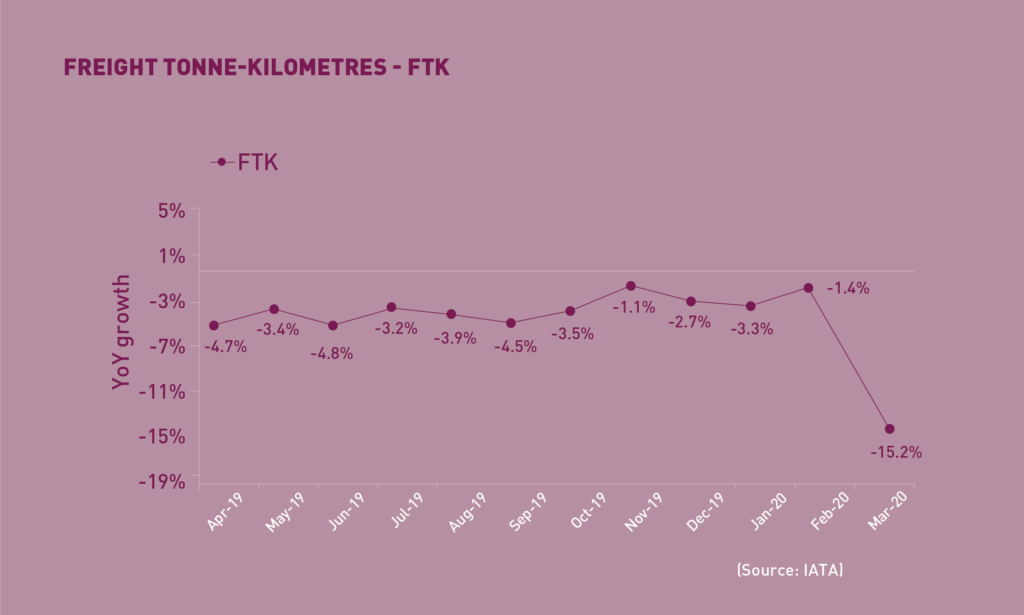 World freight traffic reported a decline of -15.2% YoY in March 2020, -13.8 percentage points lower than the fall in the previous month, reaching 12 consecutive months of negative YoY growth for 12 consecutive months. Building on the weaker freight demand due to the trade tensions, the widespread of COVID-19 across all regions further deteriorated the freight traffic result. The fall in freight demand, however, was notably slower than the pace of passenger traffic decline, mainly due to the need for transportation of medical supplies and other essential goods. The increase in all-freighters and cargo-only operations using passenger aircraft has offset the reduction in belly cargo capacity. 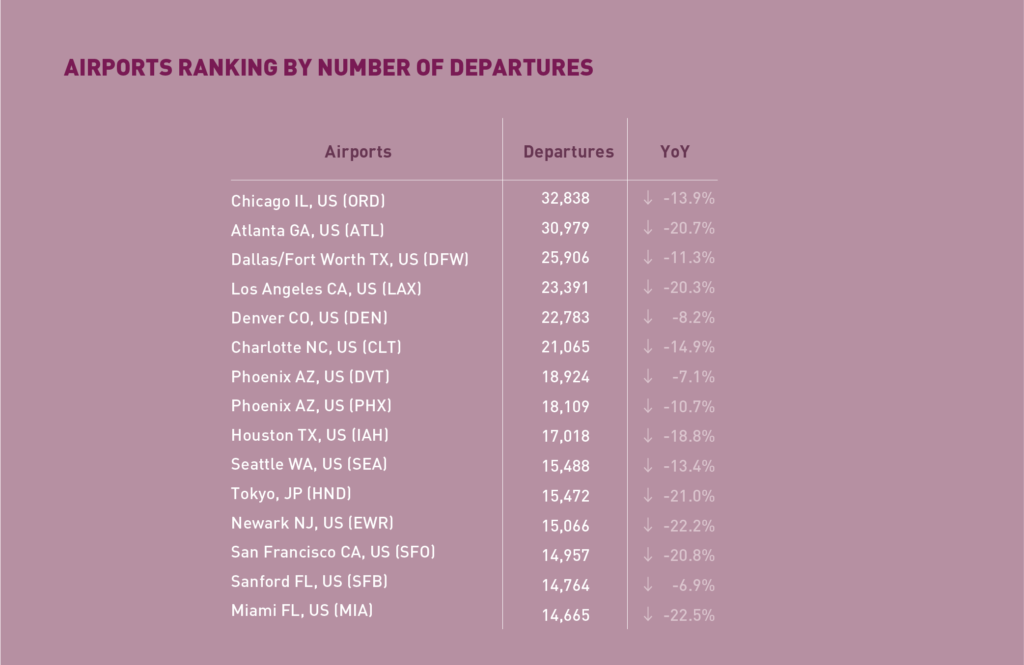 In terms of aircraft departures, all the Top 15 airports reported declines with a combined fall of -15.7% YoY.
Due to the COVID-19 impact, several major airports disappeared from the Top 15 ranking. Except Tokyo,
all the other Top 15 were US airports. Chicago remained at 1st with a decline of -13.9%, followed by
Atlanta at -20.7%. 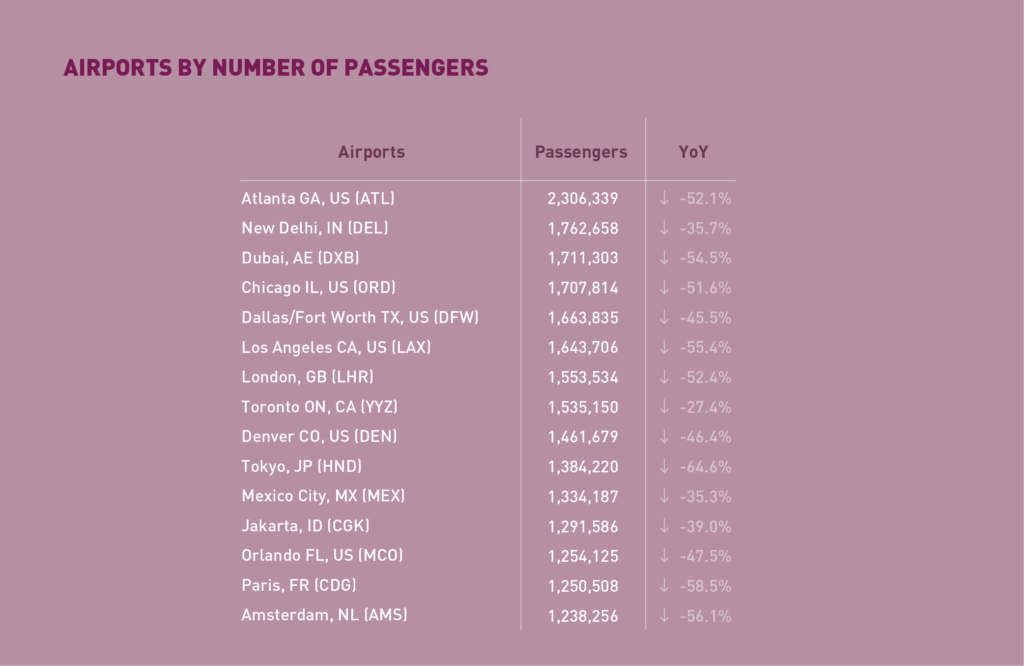 In terms of passengers, the Top 15 airports plunged by -49.8% YoY with passenger numbers in most of the major hubs more than halved. Airports in China remained being impacted the most and did not rank within Top 15. Atlanta remained at 1st albeit with a stark decline of -52.1%. Followed was New Delhi with a relatively less severe drop of -35.7%. The most significant fall was recorded by Tokyo at -64.6%. 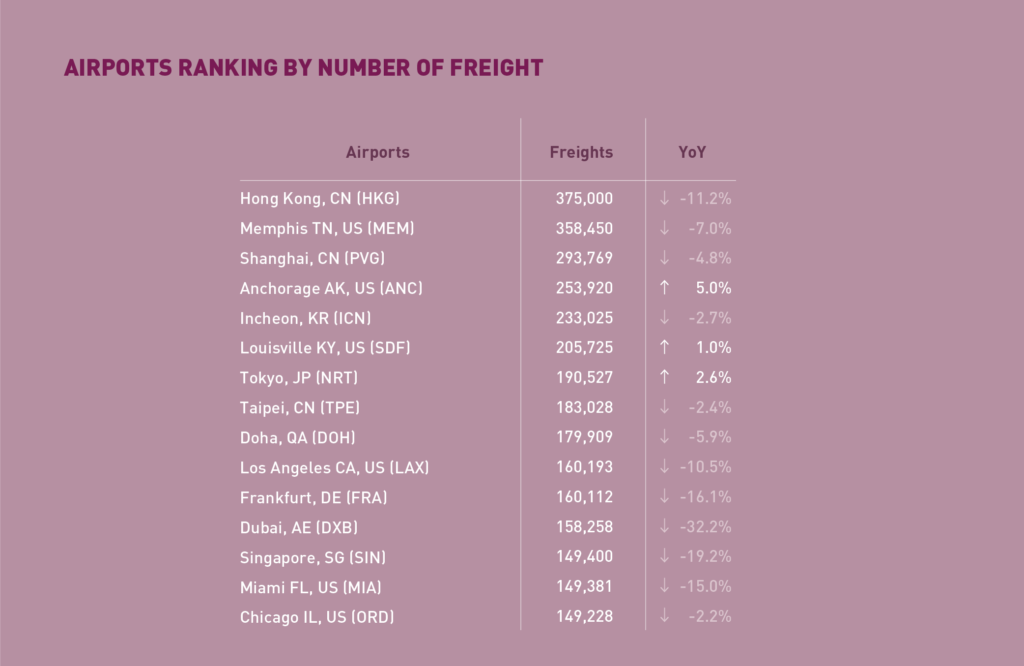 In terms of freight, the Top 15 airports reported a decline of -8.1% YoY, much slower than the pace of passenger traffic fall, owing to the increased operation in all-freighter and cargo-only operations. Hong Kong remained at 1st despite down by -11.2%. The sharpest fall was recorded in Dubai with -32.2%, followed by Singapore (-19.2%). 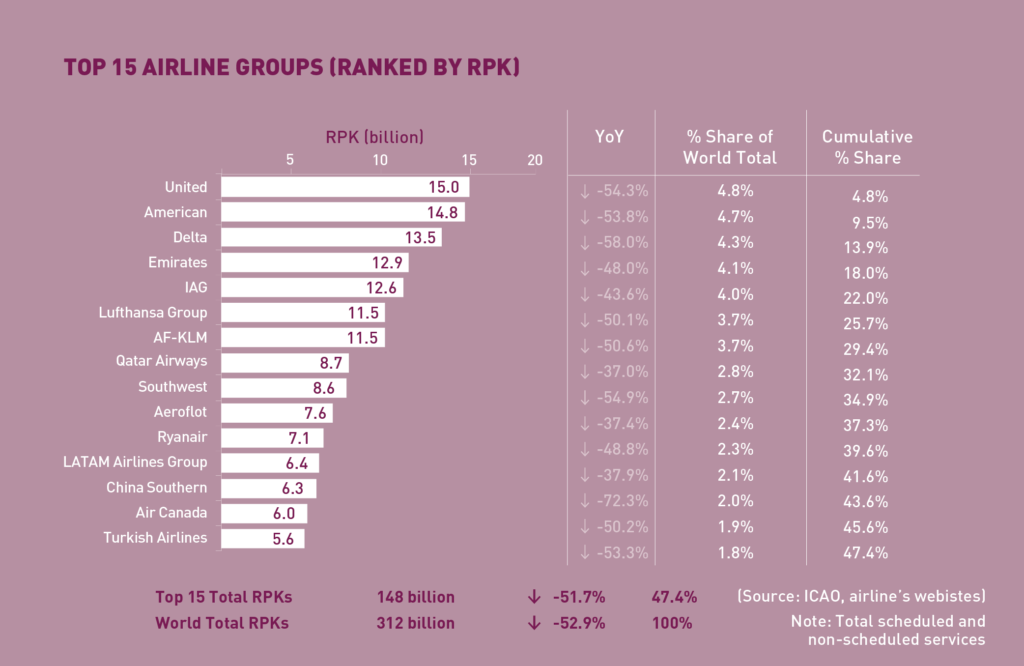 In terms of RPK, the Top 15 airline groups accounted for 47.4% of the world’s total RPK in March 2020 and declined by -51.7% YoY. This decline was +1.2 percentage points less than the world’s average on scheduled services, with contraction in traffic of all airlines in the Top 15. Ranking of the Top 15 airlines was distorted due to the different phase of impact of COVID-19 by region and State.

IAG and Lufthansa ranked up to 5th and 6th with -43.6% and -50.1% decline, respectively. AF-KLM fell sharply by -50.6%, and went down 2 positions to 7th. Aeroflot appeared in the Top 15 and ranked 10th with a fall of -37.4%. Ryanair ranked down to 11th with a decline of -48.8%. With traffic more than halved, Turkish Airlines went down 4 positions to 15th. China Southern experienced the most precipitous decline with over two-thirds of its traffic evaporated. The airline, however, made it back to the Top 15 and ranked 13th. LATAM remained at
12th with a fall of -37.9%. 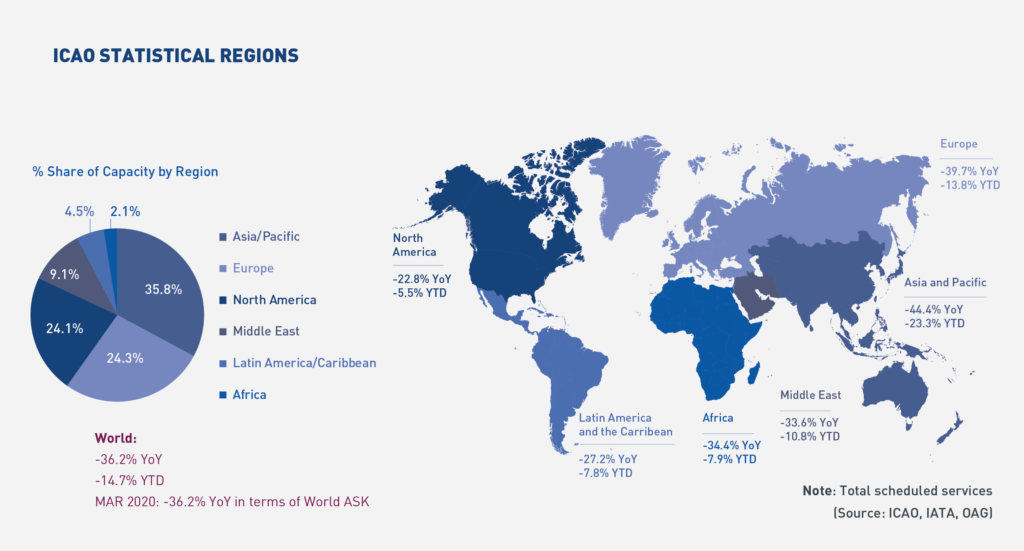 Worldwide capacity contracted by -36.2% YoY in March 2020. The decline in world capacity was driven by the drastic capacity reduction in all regions amidst the COVID-19 outbreak, most notably in Asia/Pacific and Europe. Global capacity is expected to further shrink in the coming month as States geared up to contain the pandemic enforcing stringent travel restrictions and border closure.