The numbers that are shared in the article below reflect the situation as it was in January 2020. In the coming months the analysis of the economic and aviation indicators we share will reflect the impact of COVID-19 on this industry.

World Results and Analyses for January 2020 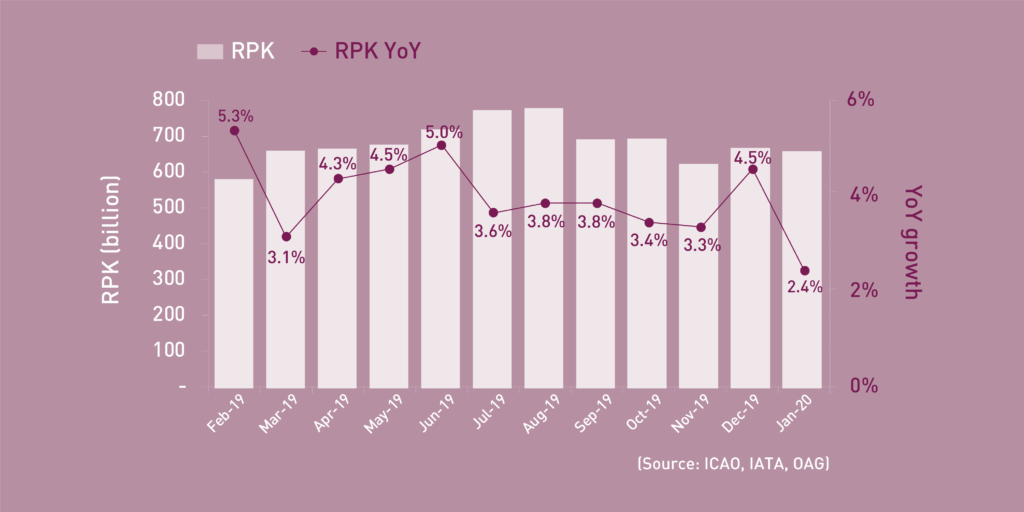 World passenger traffic grew by +2.4% YoY in January 2020, -2.1 percentage points lower than the growth in the previous month. All regions experienced a slowdown, except for the Middle East at the same pace. The most notable decline was observed in Asia/Pacific impacted by the COVID-19 outbreak started from the last week of the month. The disruption primarily affected domestic traffic of China and international demand within the region. Chinese domestic traffic fell by around -7.0% for the first time since 2008, contributing to the overall domestic traffic softening. 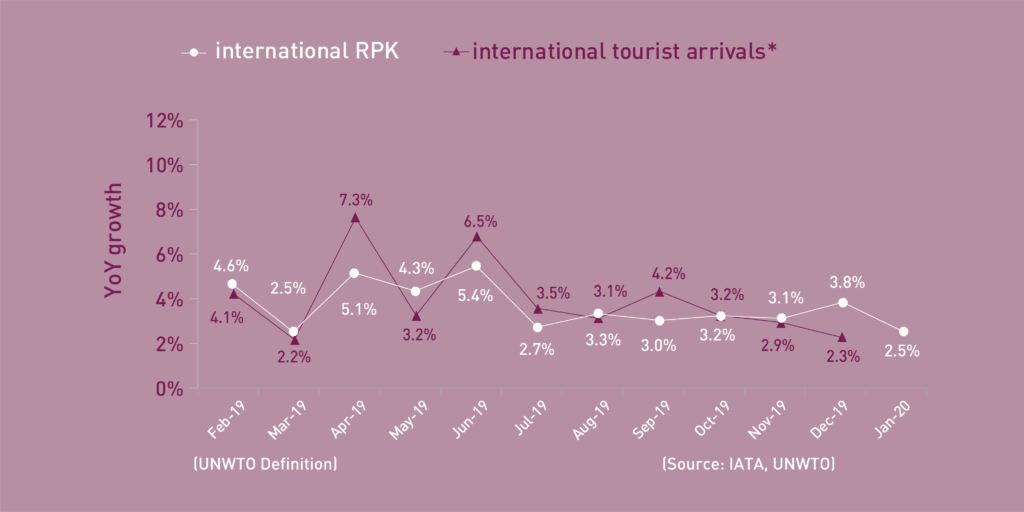 International passenger traffic grew by +2.5% YoY in January 2020, -1.3 percentage points lower than the growth in the previous month. All regions recorded slowdown except for a meagre up in Africa. Flight cancellations due to COVID-19 were initially limited to Asia/Pacific, but the scale of impact is expected to be wider and intensified in the following month. The growth of international tourist arrivals* remained relatively stable. 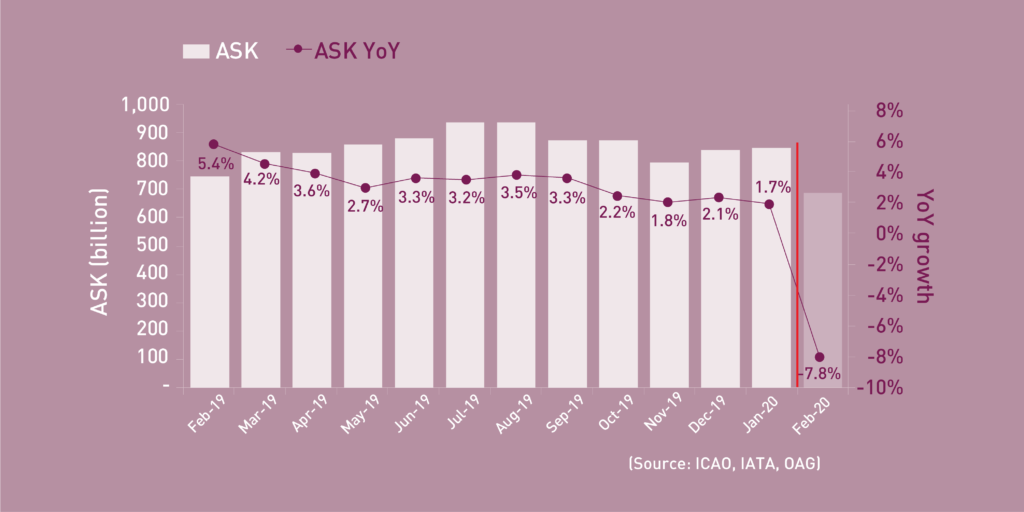 Capacity worldwide increased by +1.7% YoY in January 2020, -0.4 percentage point lower than the growth in the previous month (+2.1%). The containment measures will lead to further flight cancellations and travel restrictions. As a result, capacity is expected to slump to -7.8% YoY in February 2020. 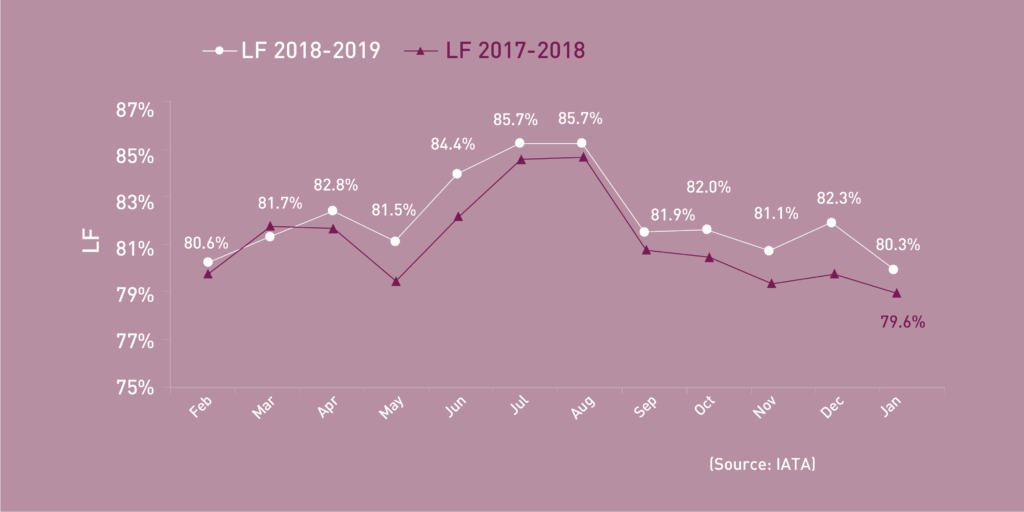 The passenger Load Factor reached 80.3% in January 2020, -2.0 percentage points lower than the previous month. As traffic growth outpaced the capacity expansion, the January LF was +0.7 percentage points higher compared to the rate in the same period of 2019. 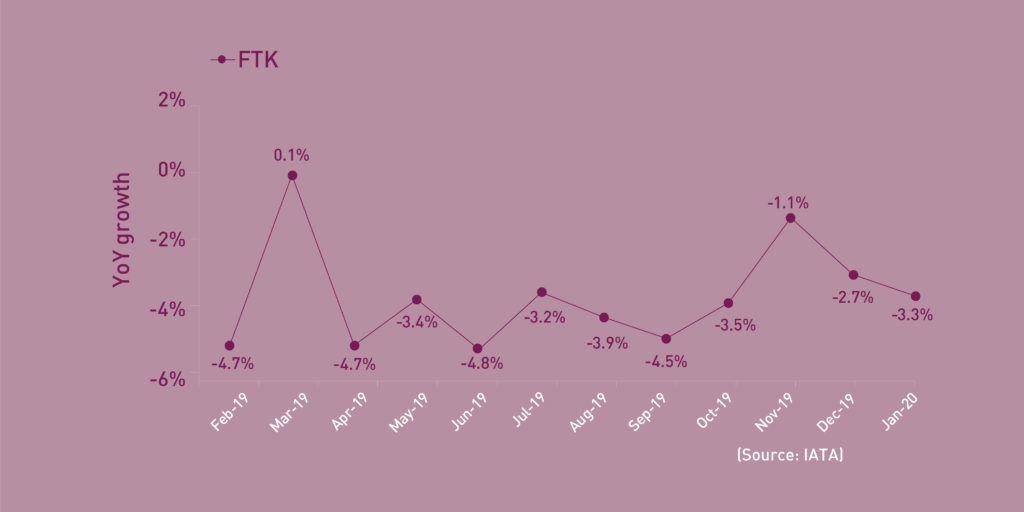 World freight traffic reported a decline of -3.3% YoY in January 2020, a further slip of -0.6 percentage point from the decline of the previous month. Later timing of Chinese New Year and the conclusion of a phase one trade agreement between the United States and China positively contributed to the air cargo demand. However, this was then offset by the disruption on the cargo supply chain due to COVID-19 outbreak at the end of the month. All regions posted negative growth, except for Africa and Latin America/Caribbean. Asia/Pacific became the weakest performing region, accounting for the bulk of the overall freight traffic decline, followed by the stagnant performance in Europe. 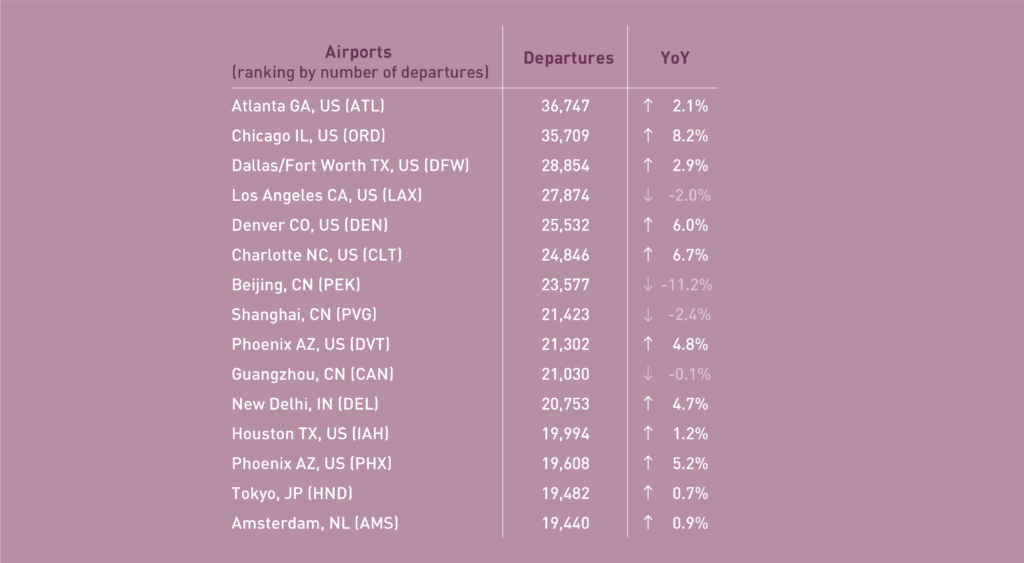 In terms of aircraft departures, the Top 15 airports reported a growth of +1.9% YoY. Eleven out of the Top 15 airports posted YoY increases. Atlanta ranked 1st up by +2.1%, whereas, Chicago became 2nd albeit recording the highest growth at +8.2%. Beijing experienced the most significant decline at -11.2% due to flight cancellations. 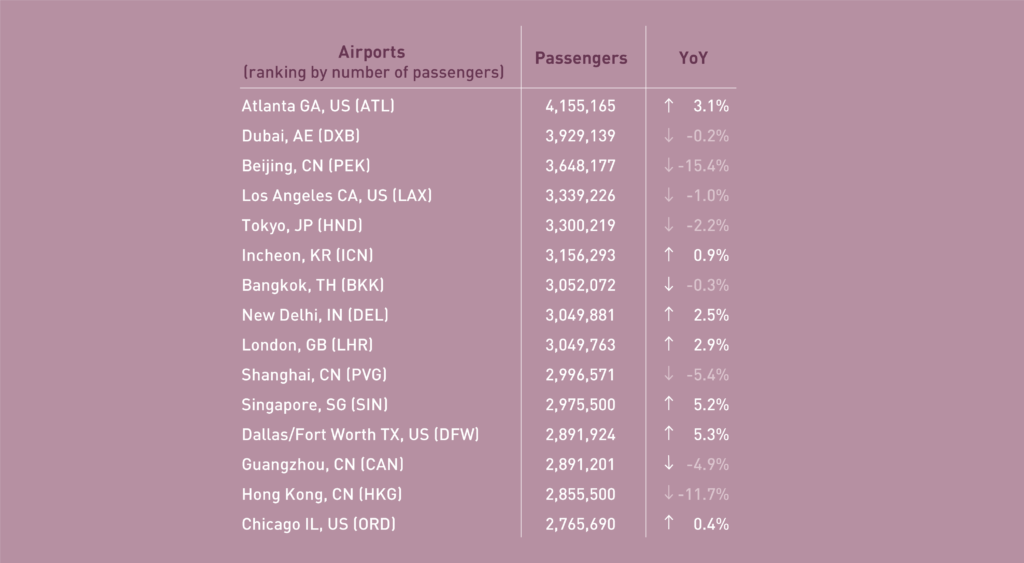 In terms of passengers, the Top 15 airports reported a decline of -1.8% YoY. Over half of the Top 15 airports posted YoY decrease. An abrupt decline was observed in major hubs in Asia/Pacific, mostly in China, heavily impacted by the travel bans and falling demand. Beijing, Hong Kong and Shanghai, contracted by -15.4%, -11.7% and -5.4%, respectively. 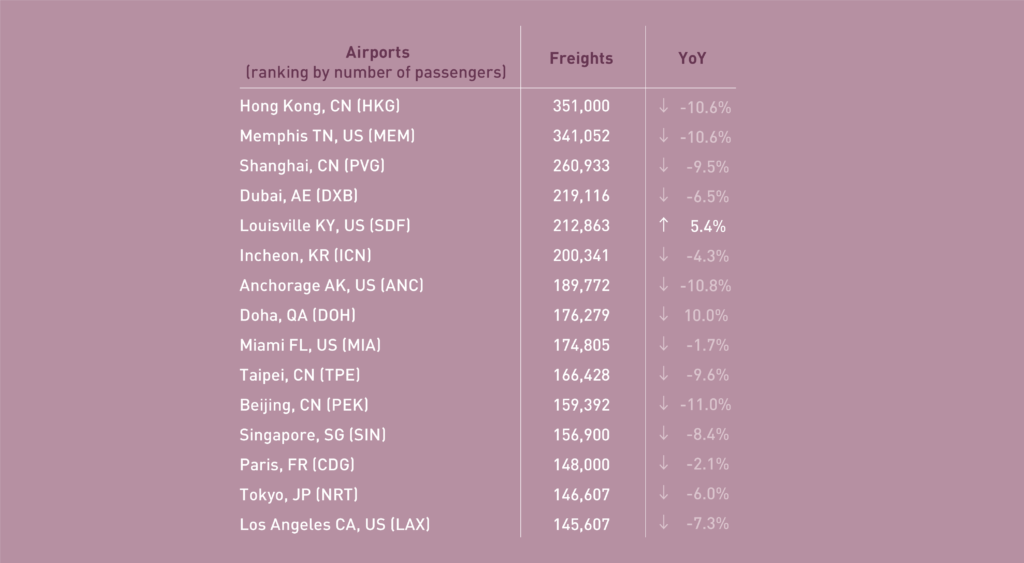 In terms of freight, the Top 15 airports reported a decline of -6.4% YoY. Most of the Top 15 airports posted declines with double-digit fall in 4 major hubs. Beijing slumped by -11.0%, followed by Anchorage at -10.8% and Hong Kong at -10.6%. Two airports contributed positively to freight traffic with Doha recording the highest growth at +10.0% followed by Louisville at +5.4%.

Emirates grew by +2.8% while remained at 4th. Qatar Airways recorded the fastest growth among the Top 15 airlines at +14.1% and improved 1 position to 11th.

All of the three major Chinese airlines posted declines due to the flight cancellations and demand drop. With a decrease of -2.4%, China Southern went down 1 position to 6th. Air China and China Eastern retained their 9th and 10th position, however, contracted by             -2.9% and -1.3%, respectively. Singapore Airlines grew by 7.9% and remained at 14th.