The numbers that are shared in the article below reflect the numbers in May 2021. The analysis of the economic and aviation indicators we share here reflect the continuing impact of COVID-19 on this industry.

World Results and Analyses for May 2021 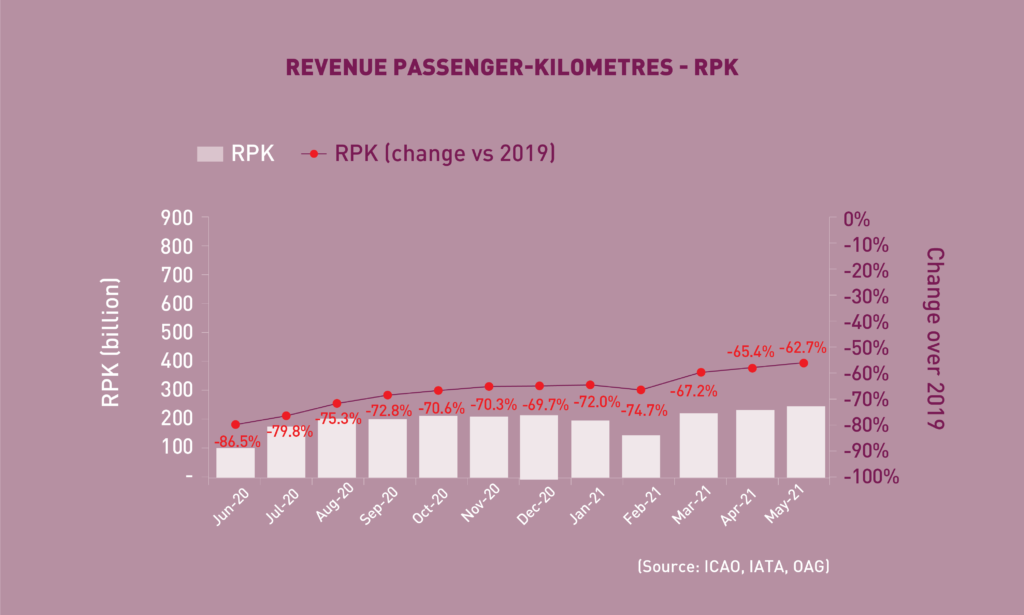 World passenger traffic fell by -62.70% in May 2021 (compared to 2019), +2.7 percentage points up from the decline in the previous month. Air travel demand has been recovering moderately as the total number of new COVID-19 cases stabilized. Nevertheless, the growing spread of the Delta variant has hit many countries and raises major concerns in relaxing travel restrictions. Domestic air travel demand remained the driving force for travel recovery. Both domestic traffic of China and the Russian Federation has recovered to pre-pandemic levels. 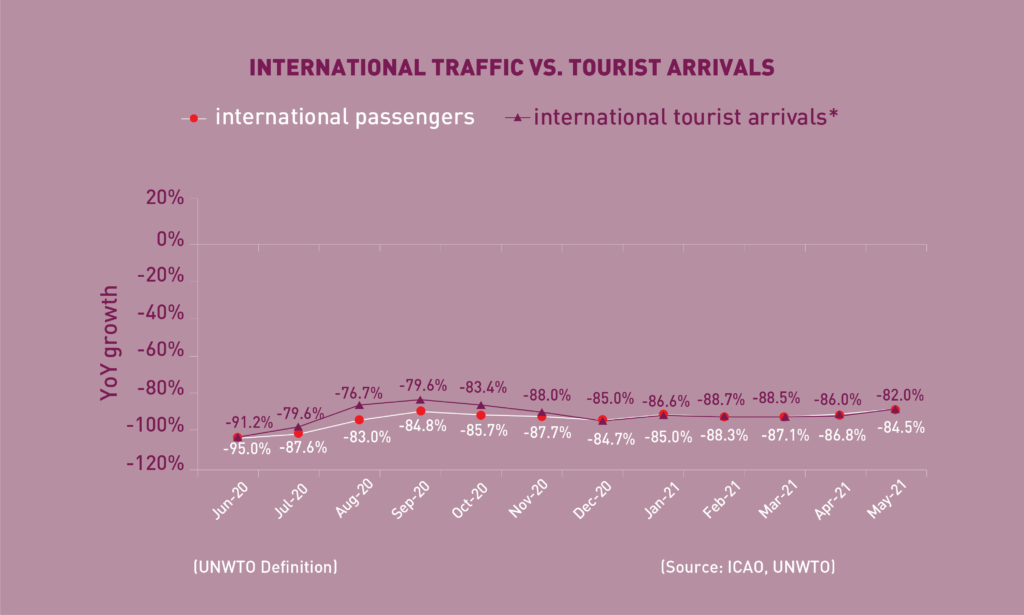 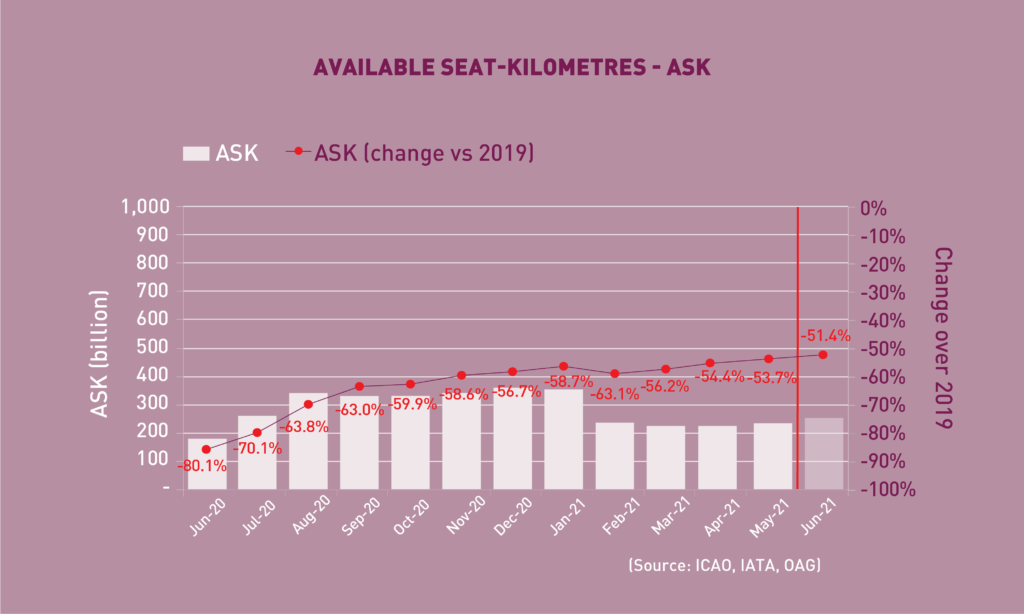 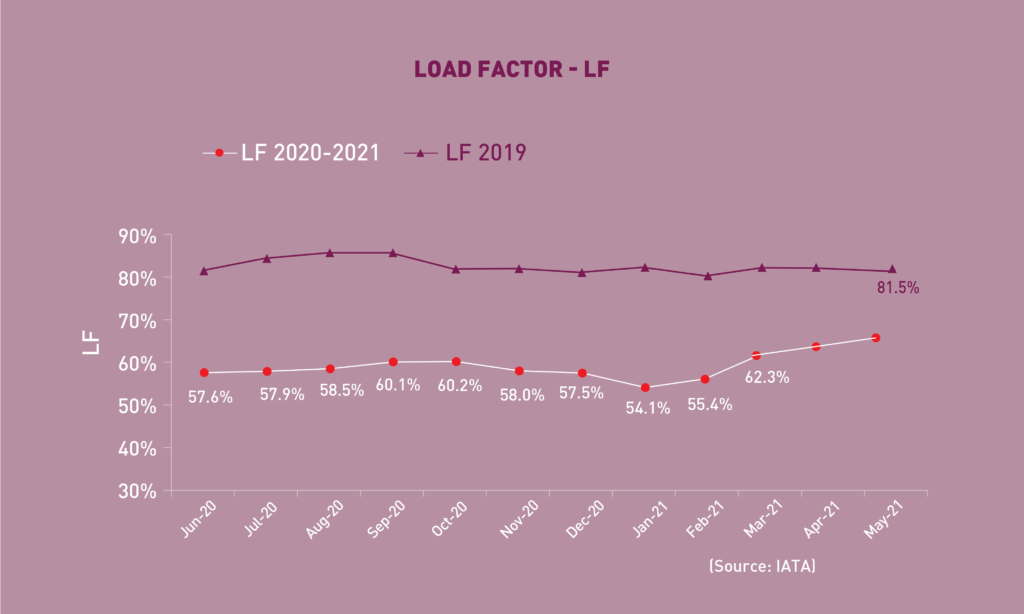 The passenger Load Factor reached 65.8% in May 2021, +2.5 percentage points higher than the previous month. Improvement in domestic load factor is more noticeable and returned to over 75%.  As the recovery of capacity was faster than travel demand recovery, the May LF was -15.7 percentage points lower than the rate in the same period of 2019. 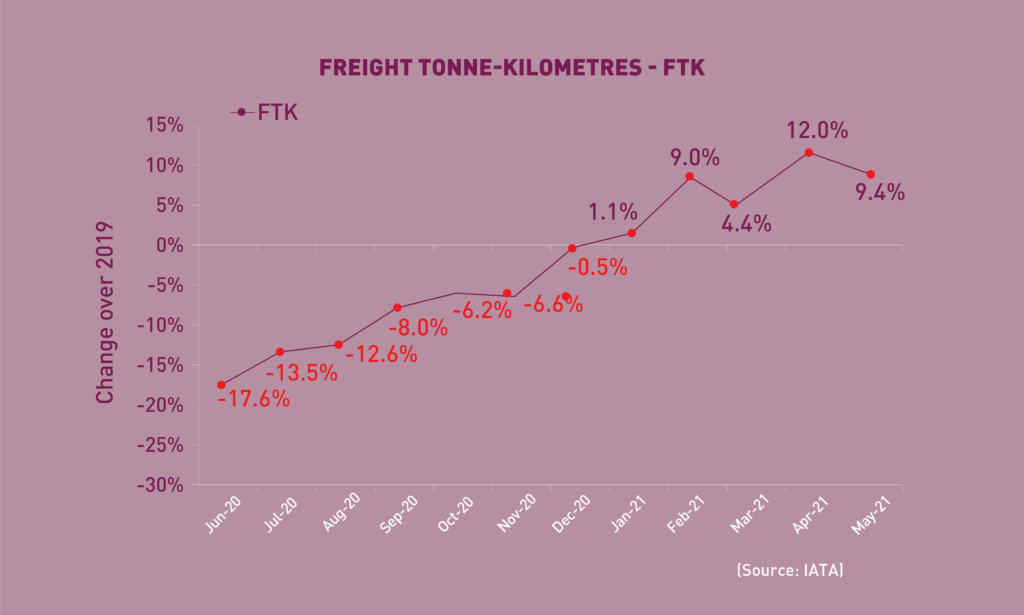 World freight traffic reported a growth of +9.4% in May 2021 (compared to 2019), -2.6 percentage points lower than the growth in the previous month. Despite the fluctuation in growth pace from month to month, the performance of air cargo remained strong overall and the global economic recovery together with the roaring e-commerce activities continued to be supportive. All regions recorded slight moderation in air cargo growth, except for Latin America/Caribbean which saw a significant rebound, however, remained as the only region showing contraction from the pre-pandemic levels. North America contributed the most to the positive global traffic growth and expanded remarkably at over +20%. 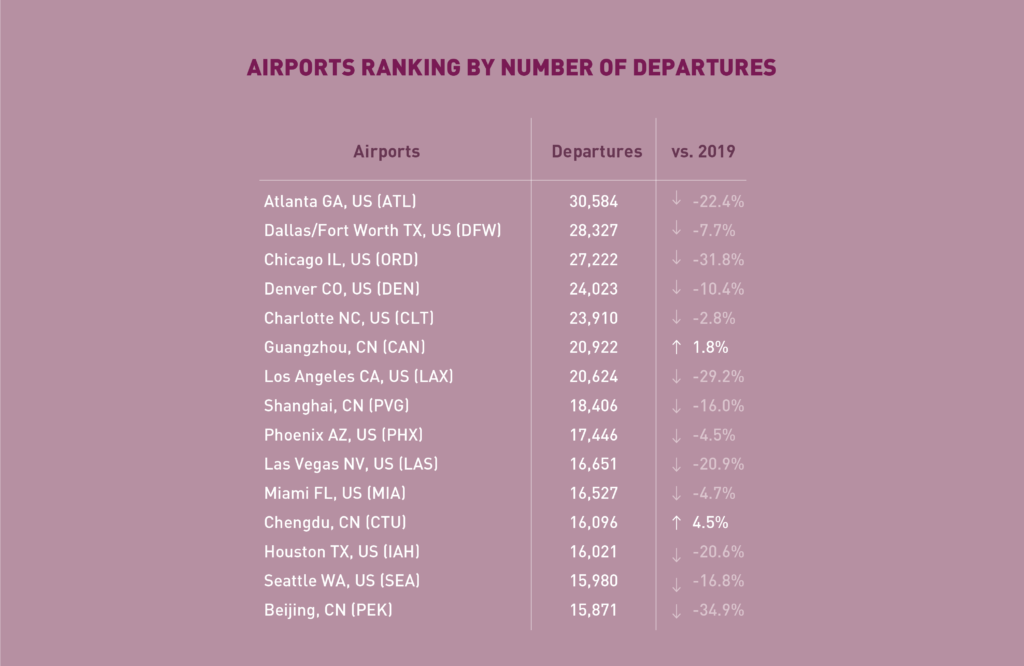 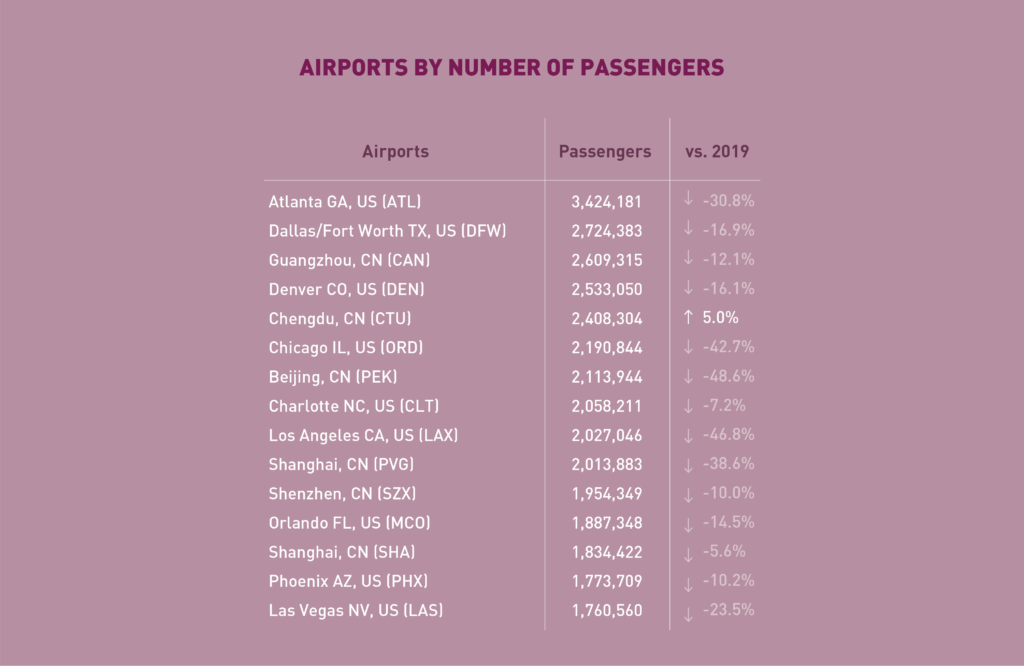 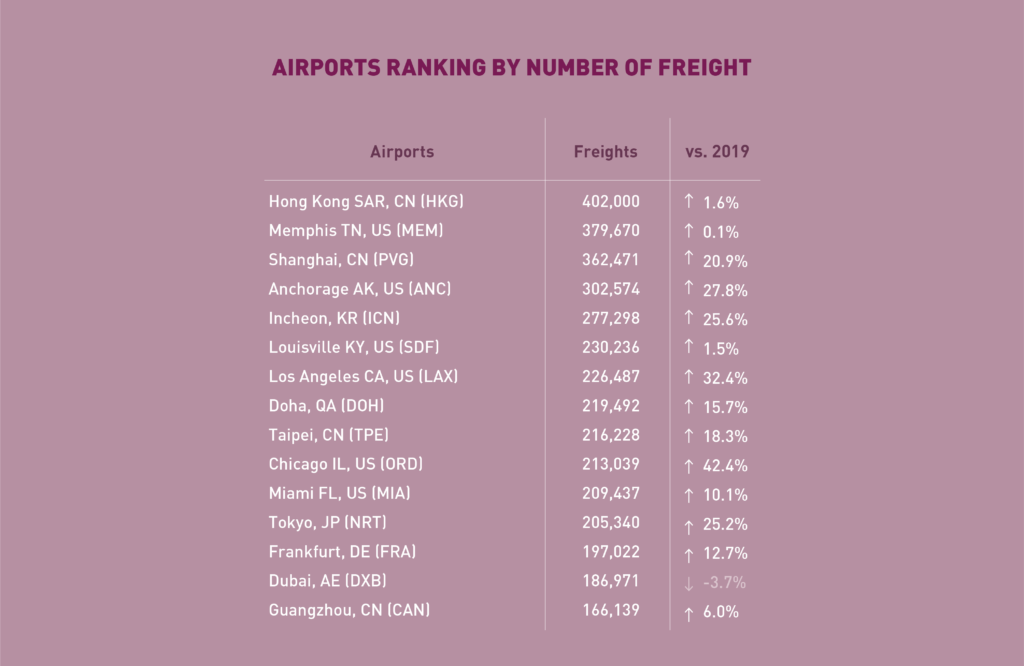 In terms of freight, the Top 15 airports reported an increase of +13.9%, compared to 2019. Dubai continued to be the only airport posting decline (-3.7%). With an increase of +1.6%, Hong Kong surpassed Memphis at +0.1%, and regained the 1st. For the fourth consecutive month, Chicago recorded the strongest increase at +42.4%. 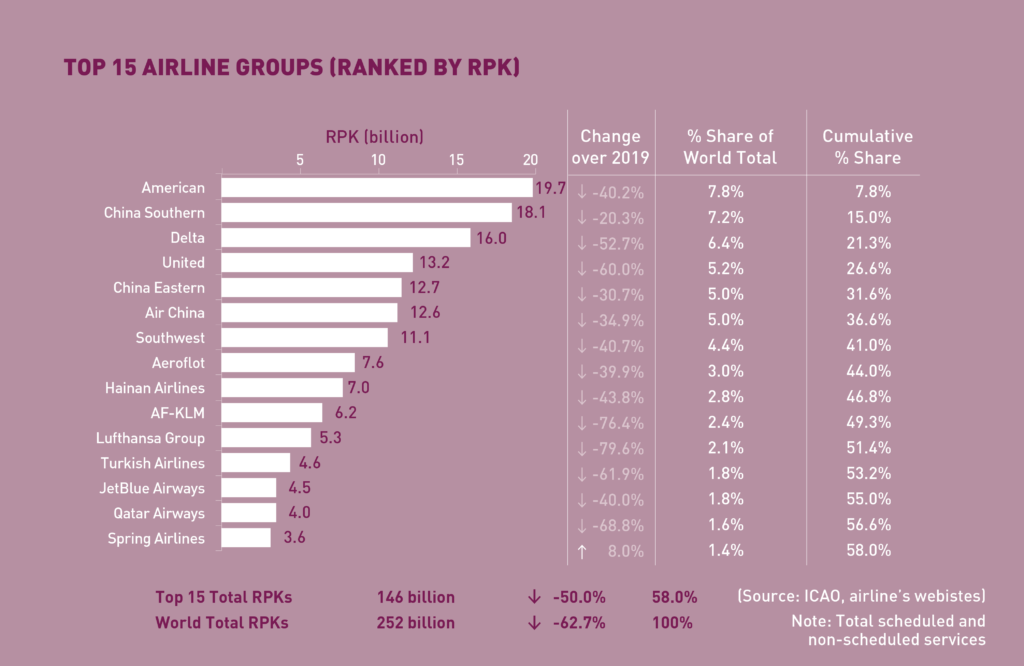 In terms of RPK, the Top 15 airline groups accounted for 58.0% of the world’s total RPK in May 2021 and declined by –50.0% compared to 2019. This decline was 12.7 percentage points smaller than the fall in world’s average RPK. Airlines with large domestic markets continued to lead the growth chart.

US airlines have been recovering steadily. American regained the 1st position with a decline of -40.2%, compared to 2019. Both Delta and United improved two positions to 3rd and 4th, while remained at over 50% below the 2019 RPK levels. Southwest stayed at 7th, and for the first time, JetBlue also ranked within Top15 at 13th.

Chinese airlines demonstrated relatively faster recovery, nevertheless with a light slowdown in pace. China Southern ranked 2nd with RPKs at -20.3% below 2019 levels. China Eastern and Air China moved 1 position and 3 positions down to 5th and 6th, respectively. Spring Airlines continued to be the only airline posting positive growth and grew solidly at +8.0%.

Recovery of airlines in Europe remained the weakest. Lufthansa and AF-KLM recorded the largest contractions from 2019 levels. Aeroflot and Turkish Airlines showed relatively better performance at -39.9% and -61.9%, respectively.

Qatar, the only Top15 airline from the Middle East region, improved slightly but ranked 1 position down to 14th with -68.8%. 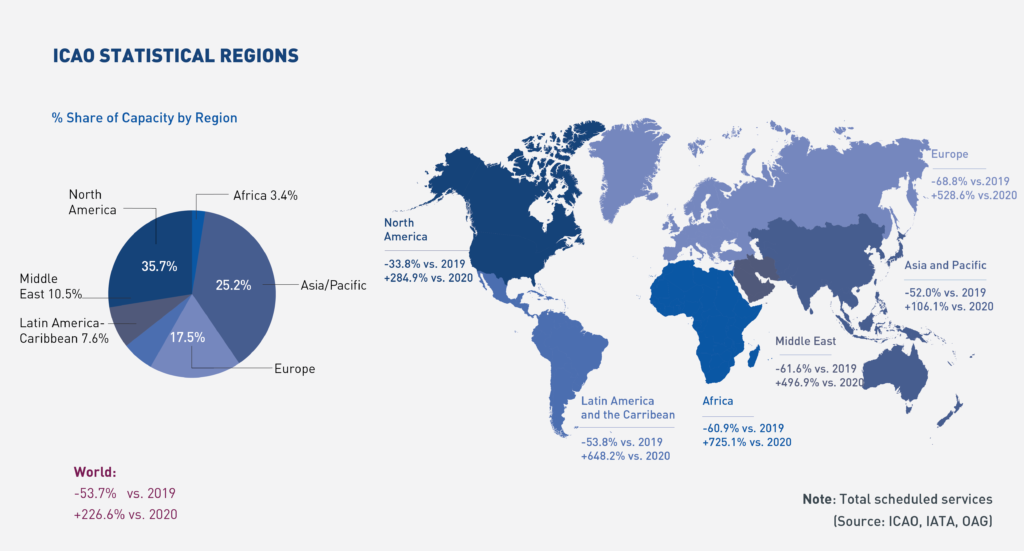 Worldwide capacity contracted by -53.7% in May 2021, compared to 2019. All regions saw improvements in capacity compared to the previous month, except for Asia/Pacific. Capacity offered in North America showed the fastest recovery to 66% of 2019 levels, followed by Asia/Pacific at close to 50%. Europe continued to record the slowest capacity recovery.