The numbers that are shared in the article below reflect the situation as it was in May 2020. The analysis of the economic and aviation indicators we share here reflects the continuing impact of COVID-19 on this industry.

World Results and Analyses for May 2020 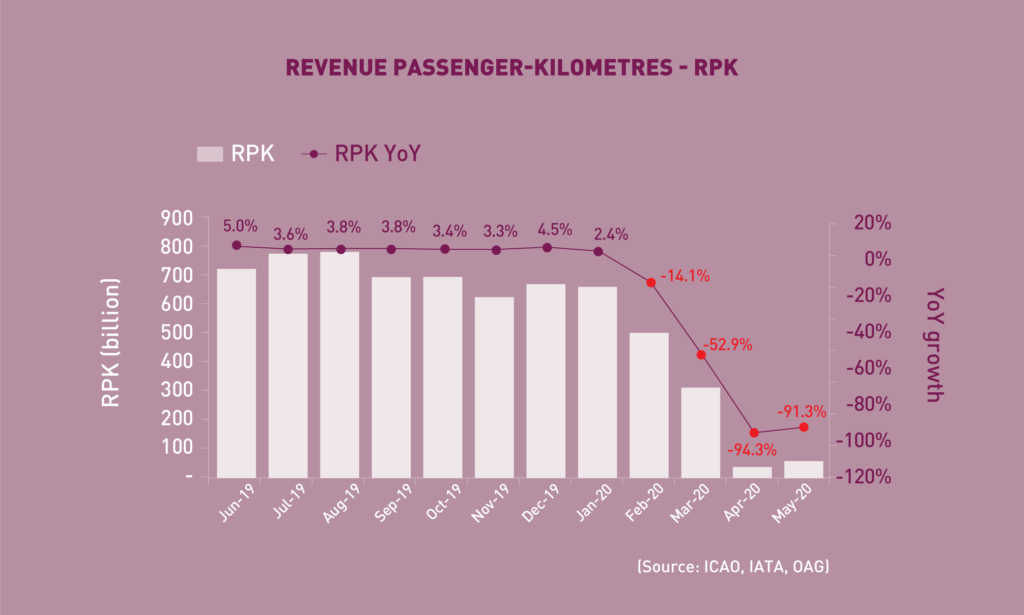 World passenger traffic fell by -91.3% YoY in May 2020, +3.0 percentage points up from the decline in the previous month. Traffic in May started to show marginal improvement after hitting rock bottom in April. However, demand remained to be remarkably low since infections from virus continued to surge and lockdowns and travel restrictions were broadly unchanged globally. The little uptick was primarily attributed to the restart of domestic operations in certain countries, specifically in China who already reopened economy with a steady recovery in domestic travel. 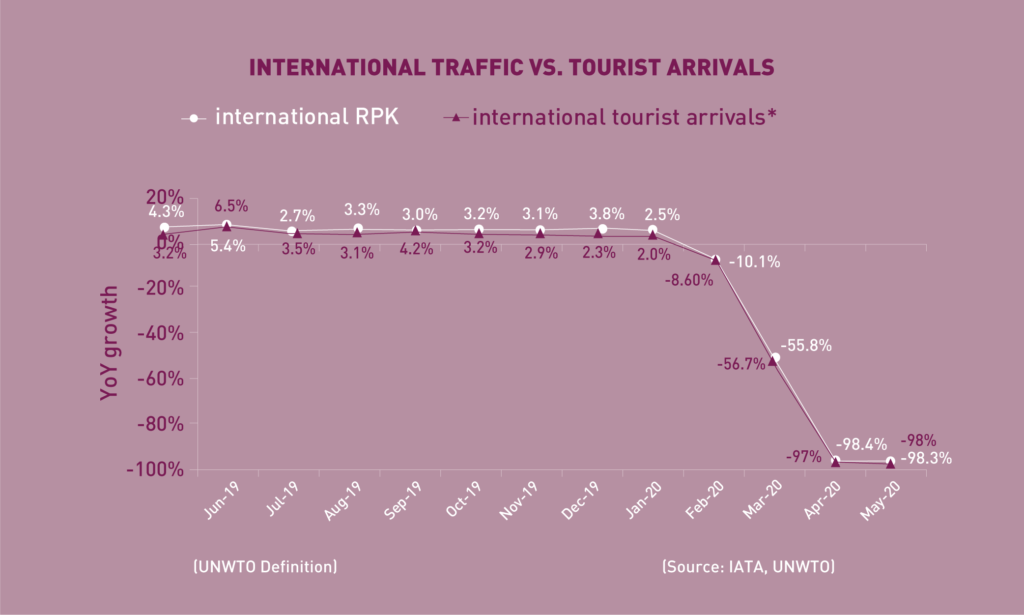 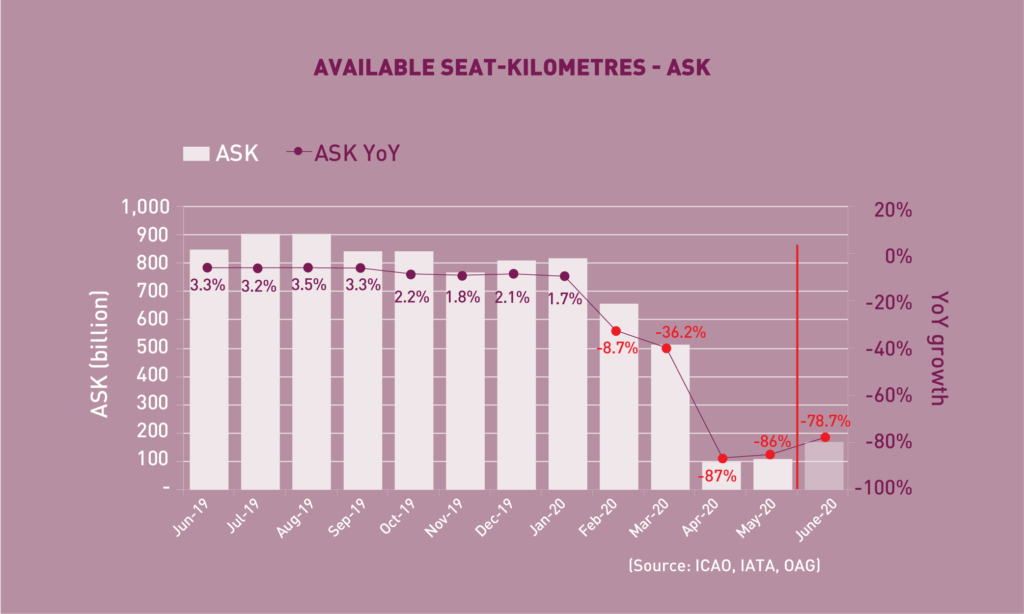 Capacity worldwide fell by -86.0% YoY in May 2020, +1.0 percentage point up from the decline in the previous month (-87.0%). With gradual ease of lockdowns and airlines slowly resuming flights, world capacity is expected to lift slightly in June 2020 to -78.7% contraction YoY. 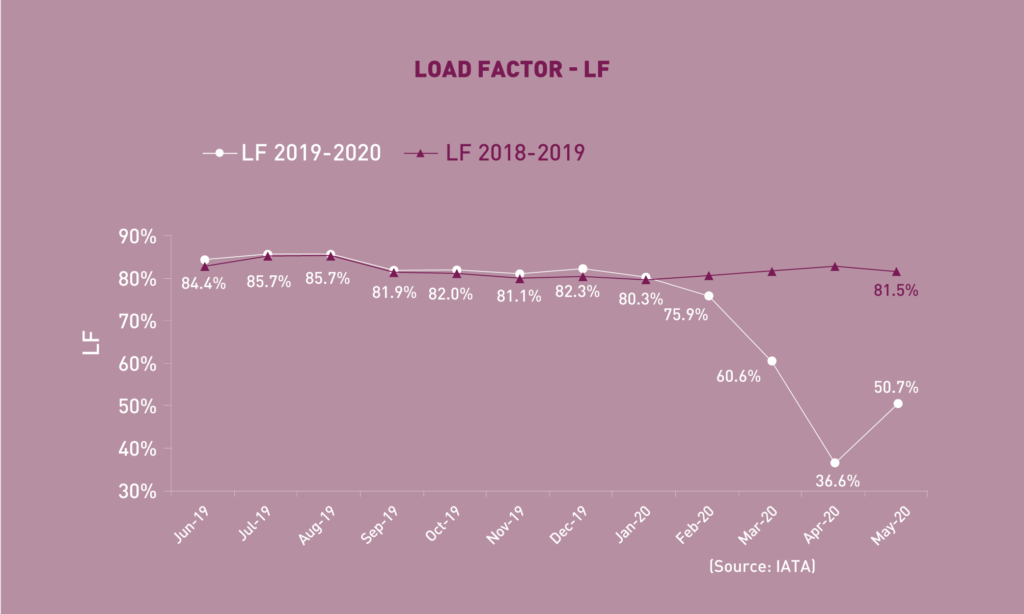 The passenger Load Factor reached 50.7% in May 2020, +14.1 percentage points up from the previous month. As a result of passenger traffic falling faster than capacity reduction, the May LF was -30.8 percentage points lower than the rate in the same period of 2019. 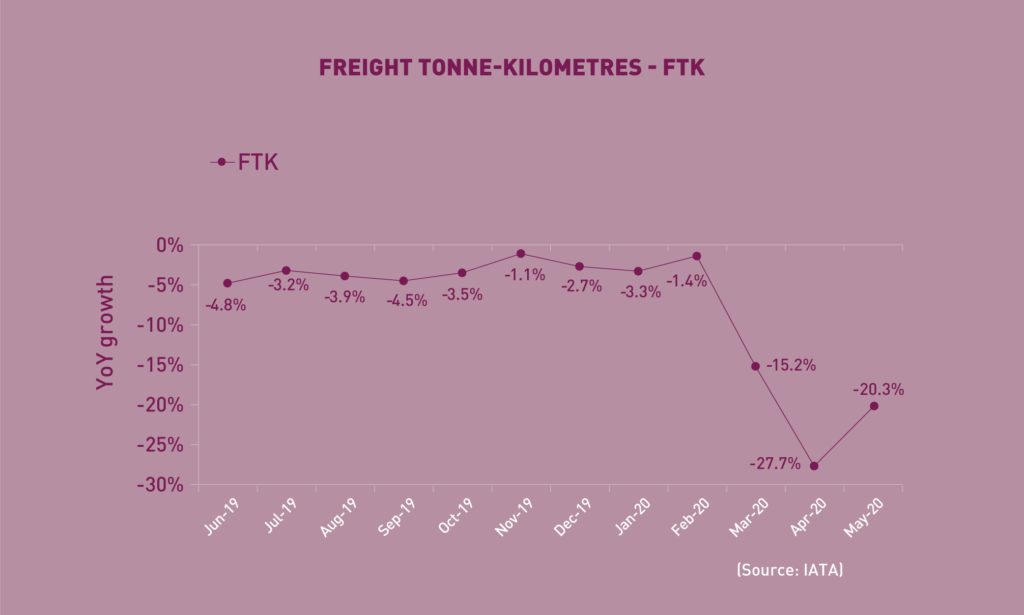 World freight traffic reported a decline of -20.3% YoY in May 2020, +7.4 percentage points up from the fall in the previous month. This upturn was owing to the slower contraction in manufacturing activity and export orders. The resilience in freight traffic compared to passenger traffic was supported by the transportation of medical supplies and essential goods amidst the pandemic. Air cargo demand, however, remained weak, facing significant challenges in tandem with the fallen global trade volumes and weakened global economy. All regions showed rebound in freight traffic with the biggest returns in Africa and Latin America/Caribbean; whereas, Asia/Pacific and Europe saw the most modest improvements with the latter being the weakest performing region. 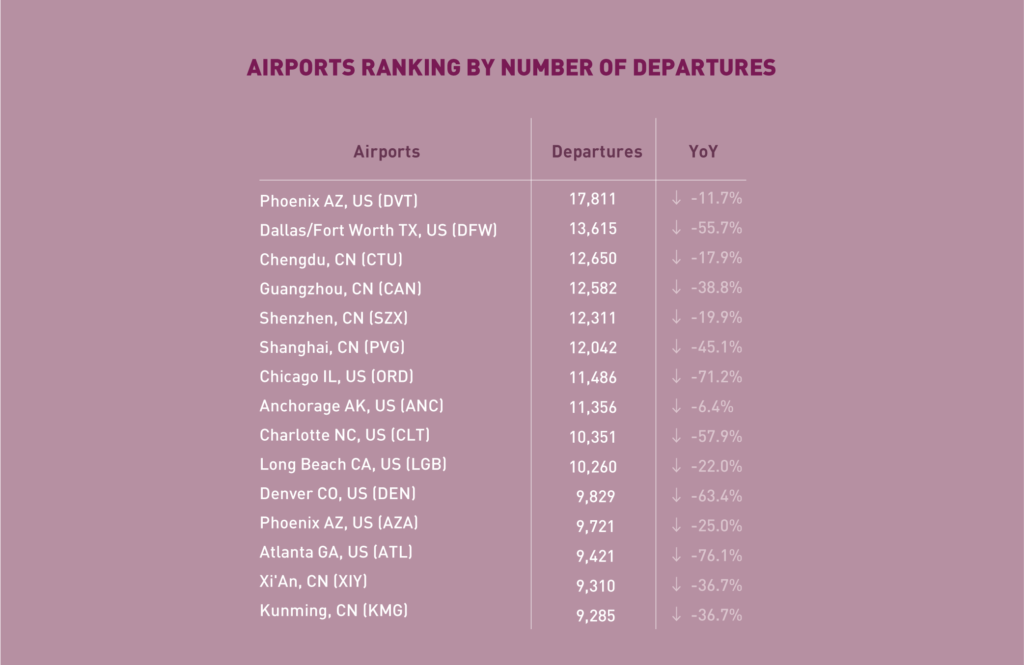 In terms of aircraft departures, all the Top 15 airports reported declines with a combined fall of -46.7% YoY. All the Top 15 airports were either US or Chinese airports. Phoenix (Deer Valley) ranked 1st, with a smaller decline of -11.7%, supported by general operations. Atlanta, once again, recorded the most significant fall of -76.1%, followed by Chicago (-71.2%). 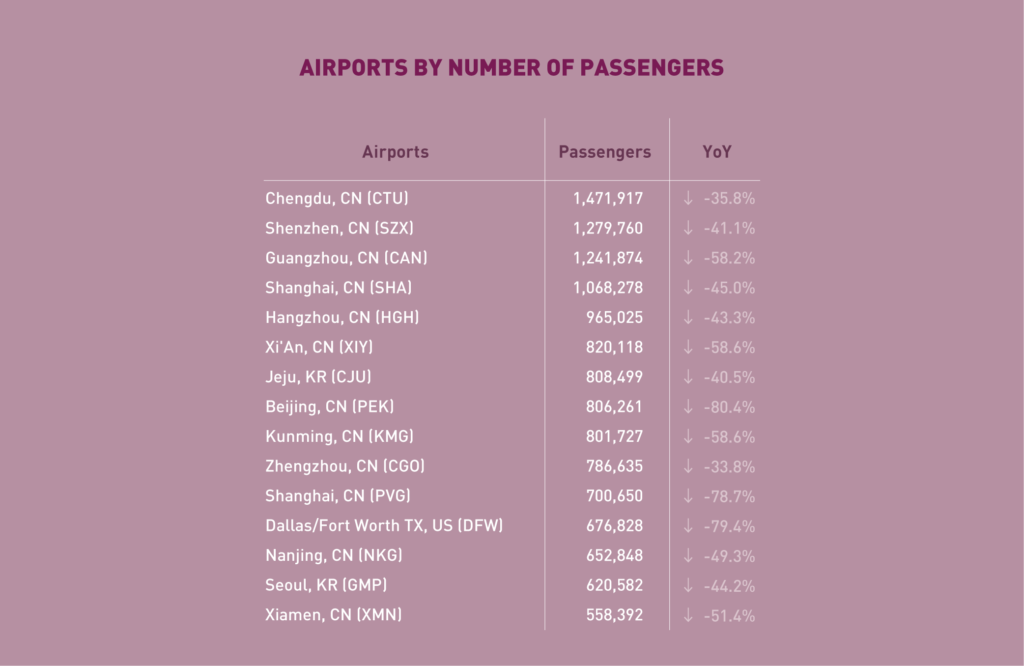 In terms of passengers, the Top 15 airports slumped by -58.3% YoY. Twelve out of the Top 15 airports were Chinese airports, as the country’s domestic travel was leading the recovery. Chengdu ranked 1st, followed by Shenzhen and Guangzhou. Two airports in the Republic of Korea, Jeju and Seoul, were also in the Top 15.  Dallas/Fort Worth was the only airport from North America ranked in the Top 15. 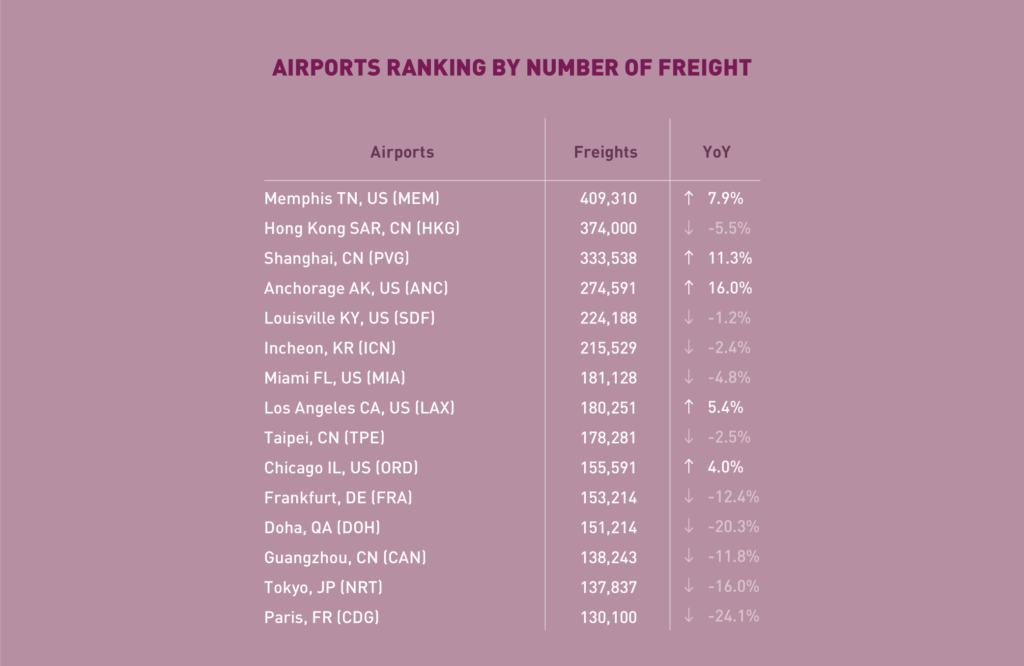 In terms of freight, the Top 15 airports reported a decline of -2.2% YoY. Majority of the Top 15 airports were in Asia/Pacific and US. Five airports recorded positive growth, with Anchorage and Shanghai growing double-digitally by +16.0% and +11.3%, respectively. Memphis ranked 1st up by +7.9%, followed by Hong Kong with a fall of -5.5%. 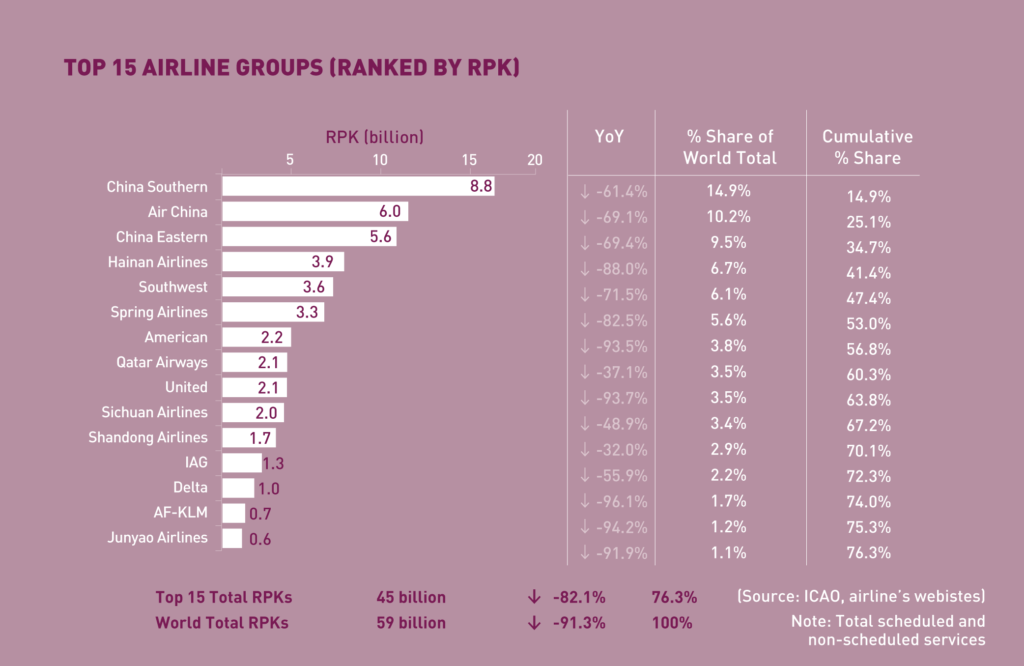 In terms of RPK, the Top 15 airline groups accounted for 76.3% of the world’s total RPK in May 2020 and declined by -82.1% YoY. This decline was +9.2 percentage points less than the world’s average on scheduled services, with contraction in traffic of all airlines in the Top 15. Ranking of the Top 15 airlines continued to be distorted due to the different degree and phase of pandemic impact by region and country.

More than half of the Top 15 airlines were Chinese airlines, supported by the steady recovery in domestic air travel in the country. China Southern, Air China, and China Eastern remained the Top 3 with traffic down ranging from -61.4% to -69.4%, improved from the previous month. Five others, Hainan Airlines, Spring Airlines, Sichuan Airlines, Shandong Airlines and Junyao Airlines ranked 5th, 8th, 10th, 11th and 12th, respectively.

Five US airlines ranked in the Top 15 with small uptick from the bottom low in April, albeit mostly still below 10% of the traffic seen in last year. American and Southwest rebounded relatively faster, and ranked 4th and 6th, respectively. This was followed by Delta and United at a slower pace. Alaska Airlines made it to the Top 15 and ranked 15th.

Recovery of airlines in Europe remained subdued, with AF-KLM and Aeroflot being the only two airlines from the region within the Top 15, with merely 5% of traffic performed in last year and ranked 13th and 14th,  respectively. 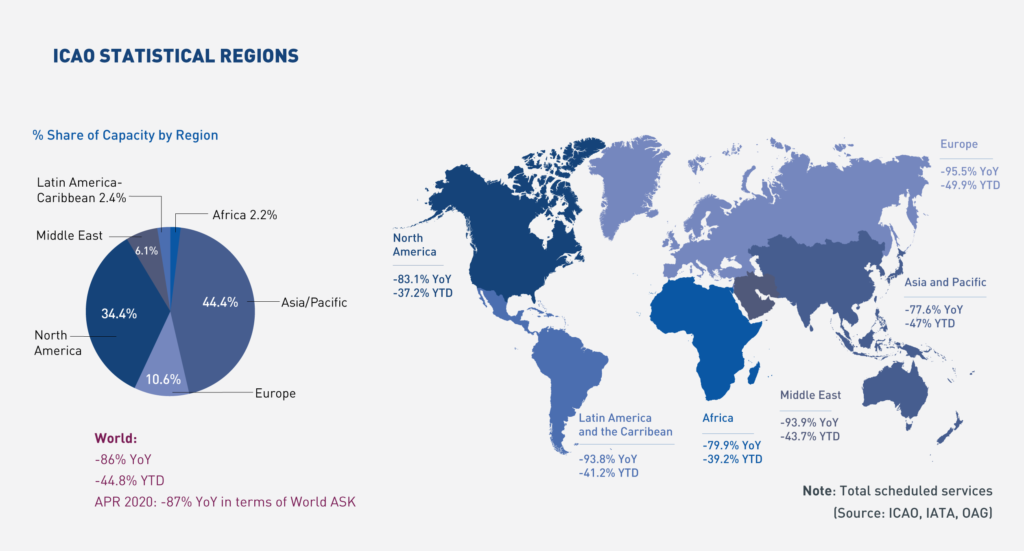 Worldwide capacity contracted by -86.0% YoY in May 2020. As many countries were still under lockdown and kept the border closed, airlines continued to ground fleet and reduce capacity to cope with the drastic fall in air travel demand. Capacity plunge was observed in all regions, with the steepest fall seen in Europe, the Middle East and Latin America/Caribbean, as was the case in April.