The numbers that are shared in the article below reflect the situation as it was in November 2020. The analysis of the economic and aviation indicators we share here reflect the continuing impact of COVID-19 on this industry.

World Results and Analyses for November 2020 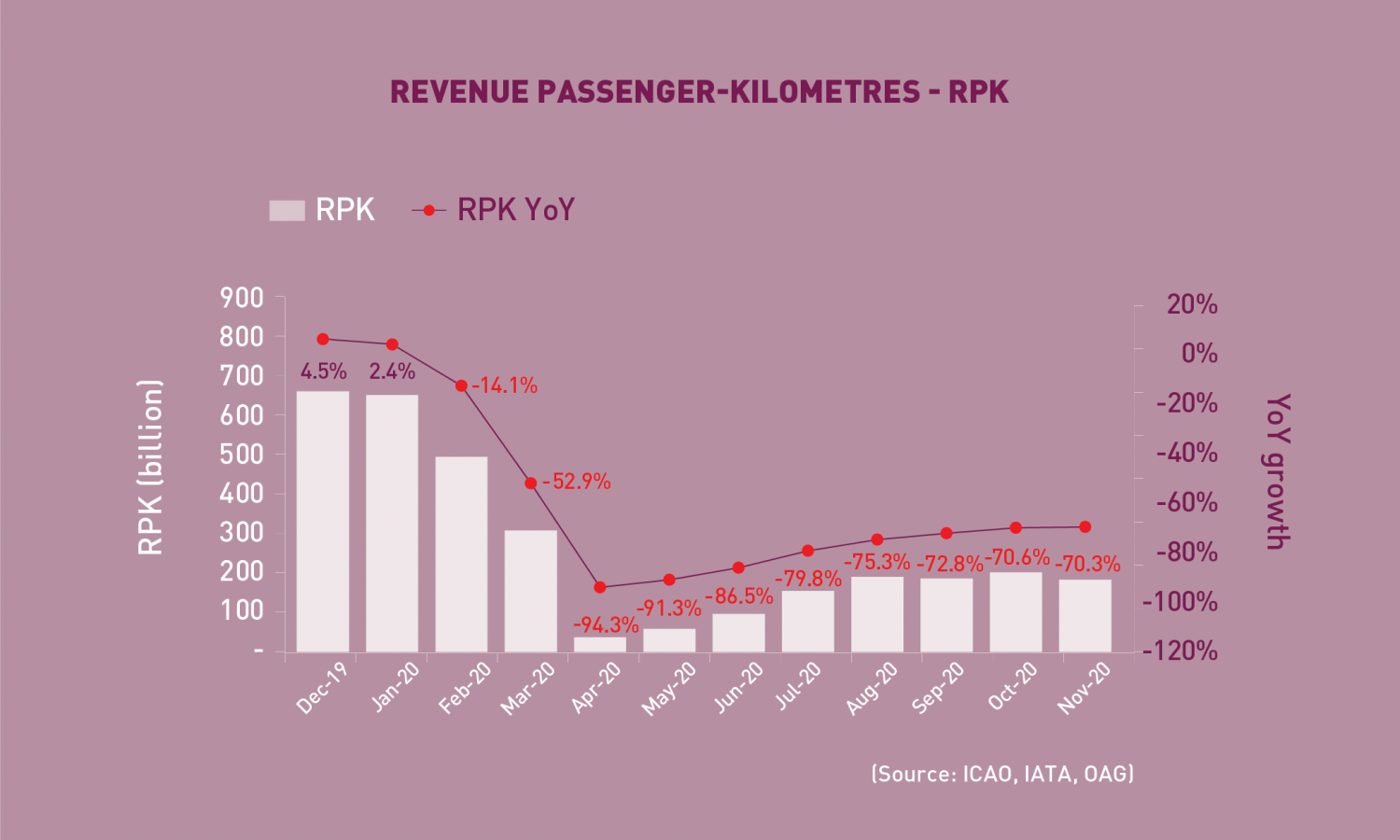 World passenger traffic fell by -70.3% YoY in November 2020, +0.3 percentage point up from the decline in the previous month. Air travel recovery was hampered by the resurgence in outbreaks and the resulting reimposition of restrictions. The impact on regions was a mix. Whereas Europe recorded a deterioration in traffic, other regions ticked up somewhat with Latin America/Caribbean showing the fastest improvements. Domestic travel recovery in China continued to be the best performing market albeit with a slight slowdown. 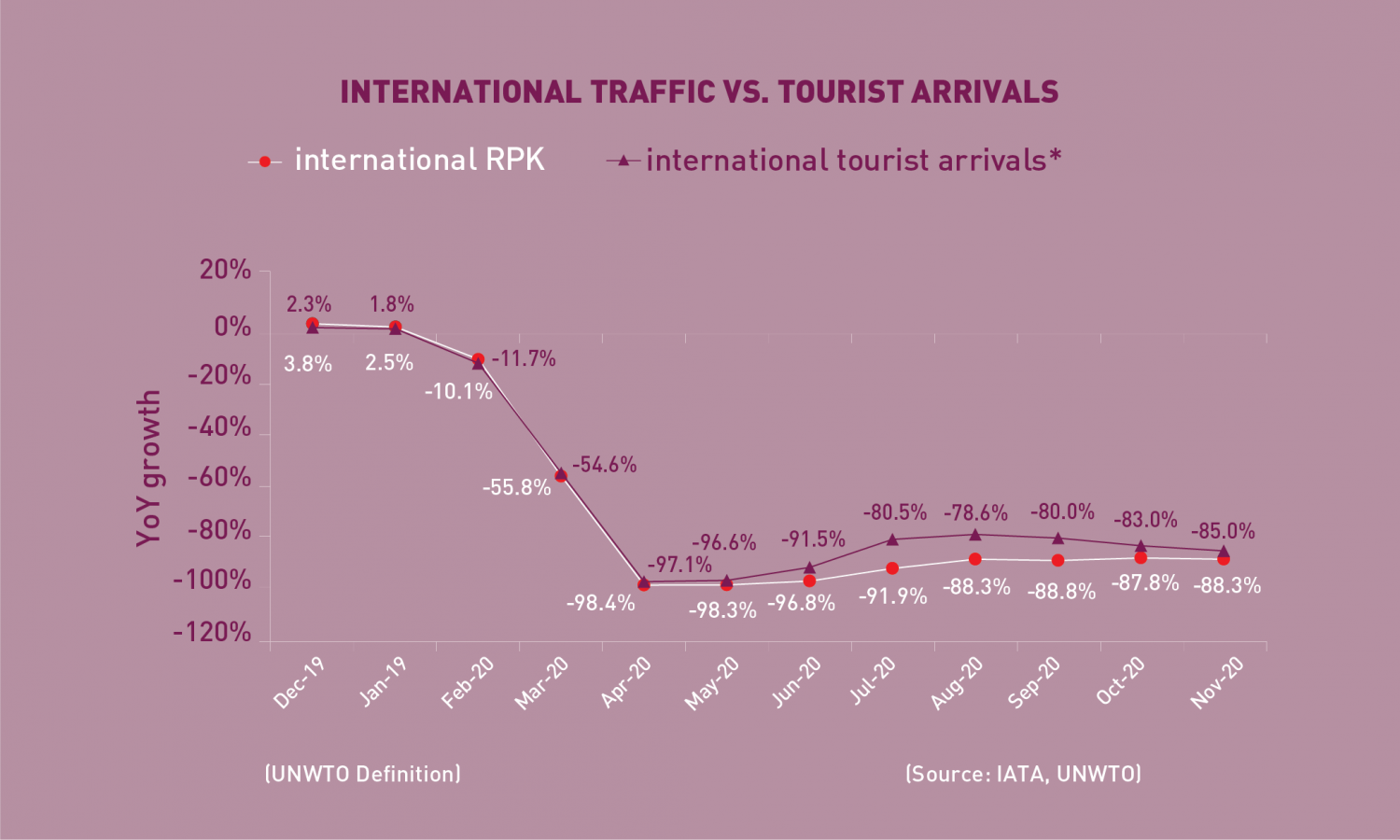 International passenger traffic fell by -88.3% YoY in November 2020, -0.5 percentage point down from the decline in the previous month. Recovery in international travel further weakened mainly due to the larger fall in Intra-Europe traffic. 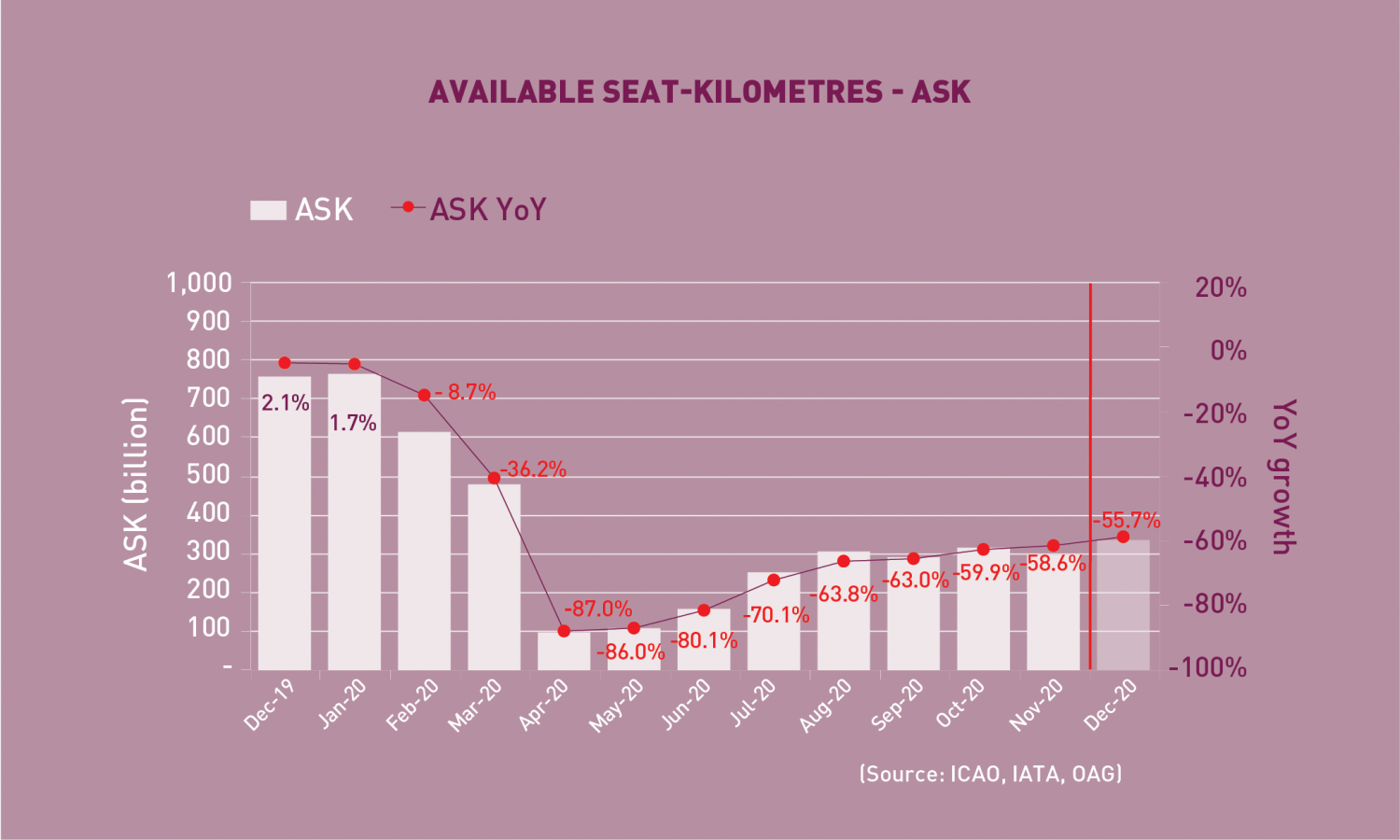 Capacity worldwide fell by -58.6% YoY in November 2020, +1.3 percentage points up from the decline in the previous month (-59.9%). Approaching the end-of-year travel period, airlines are expected to add more capacity. As a result, capacity contraction in December would ease to -55.7% YoY. 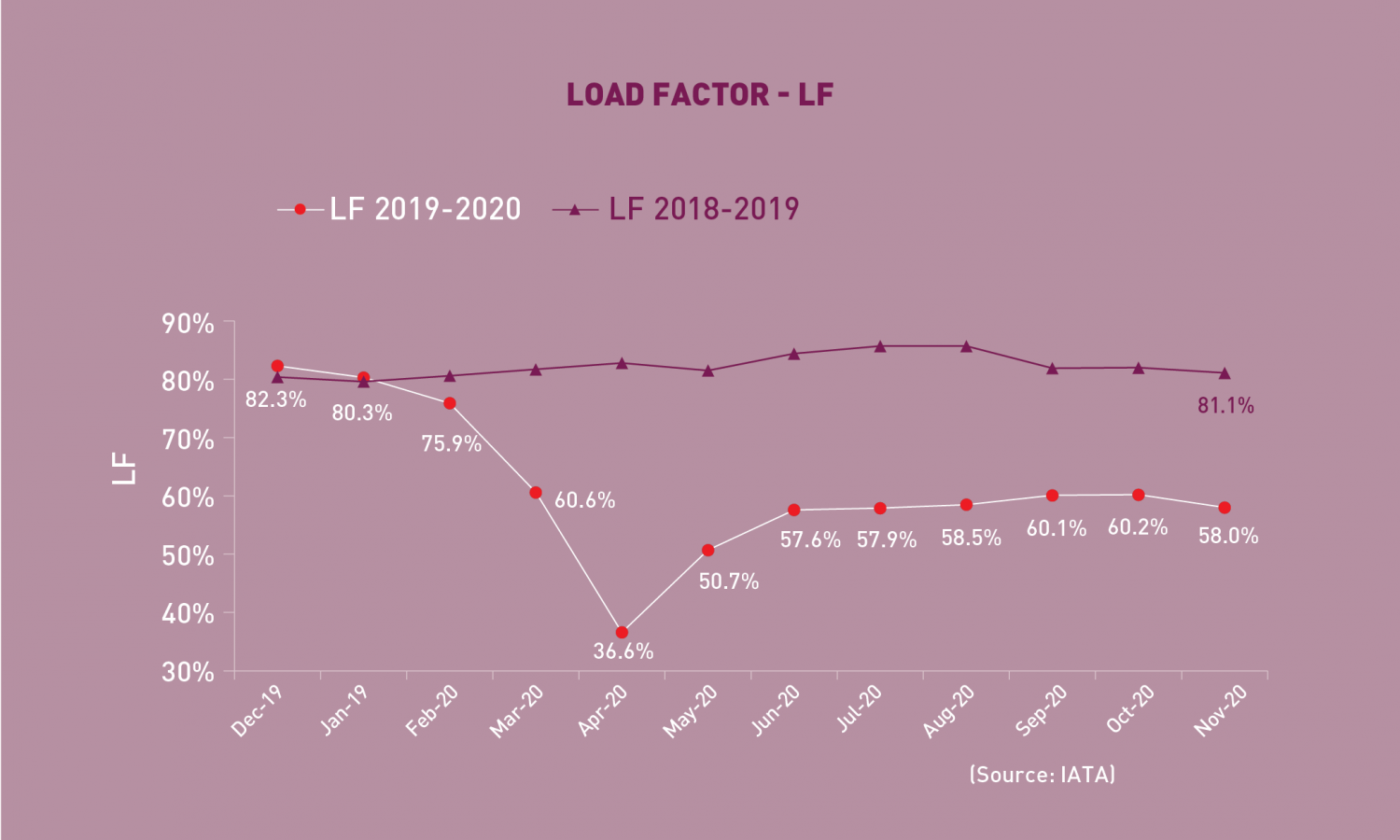 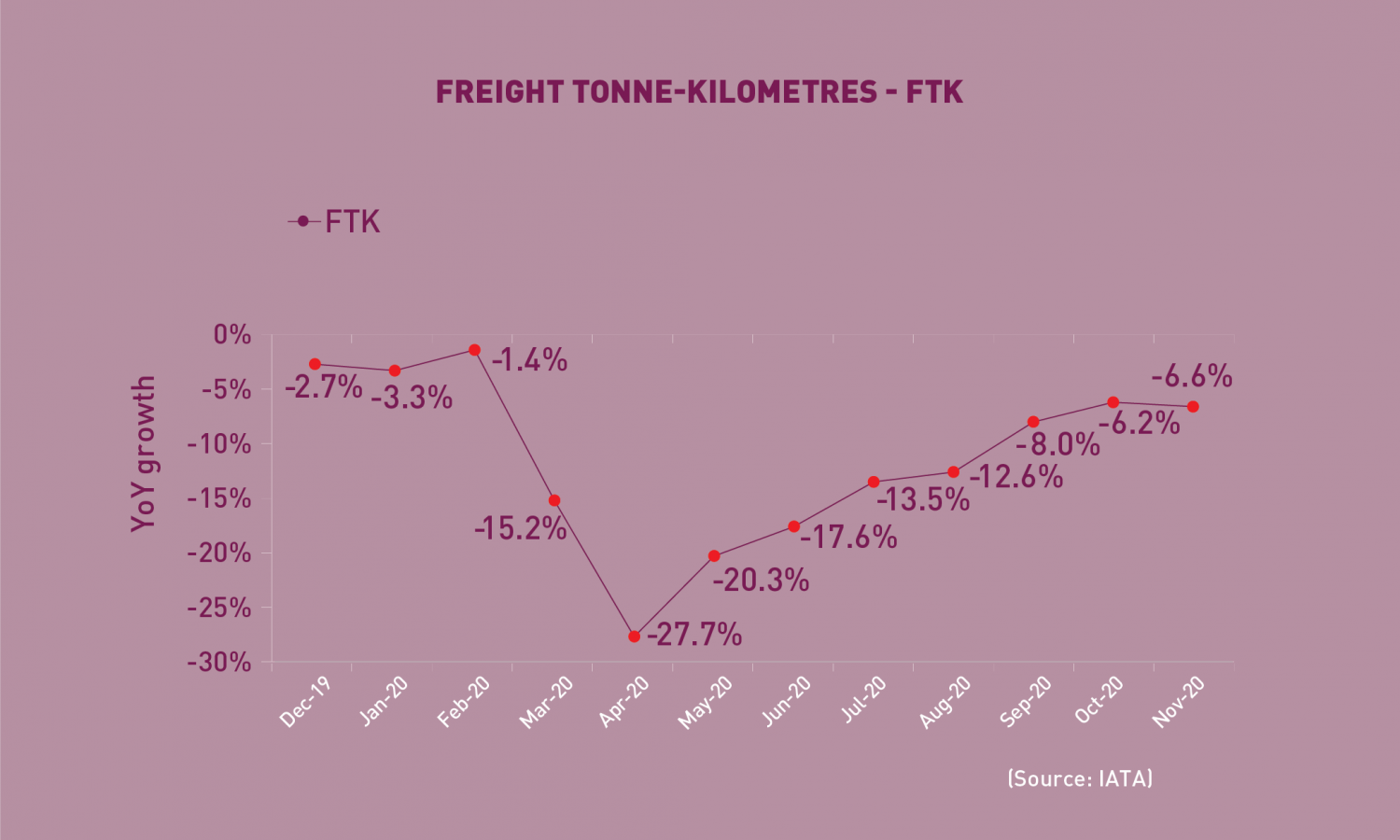 World freight traffic reported a decline of -6.6% YoY in November 2020, -0.4 percentage point down from the fall in the previous month. Air cargo recovery softened slightly as the virus resurgence had affected demand in certain markets. On the other hand, demand in air cargo in November also benefitted from the peak e-commerce events such as Black Friday and Double 11. Overall, recovery in air cargo stalled since the improvements in Asia/Pacific were offset by the setbacks in other regions, particularly in Latin America/Caribbean and Europe. Nevertheless, expectations for December remain optimistic as the economic recovery will likely continue and the consumer consumption during the holiday shopping season will also be supportive. 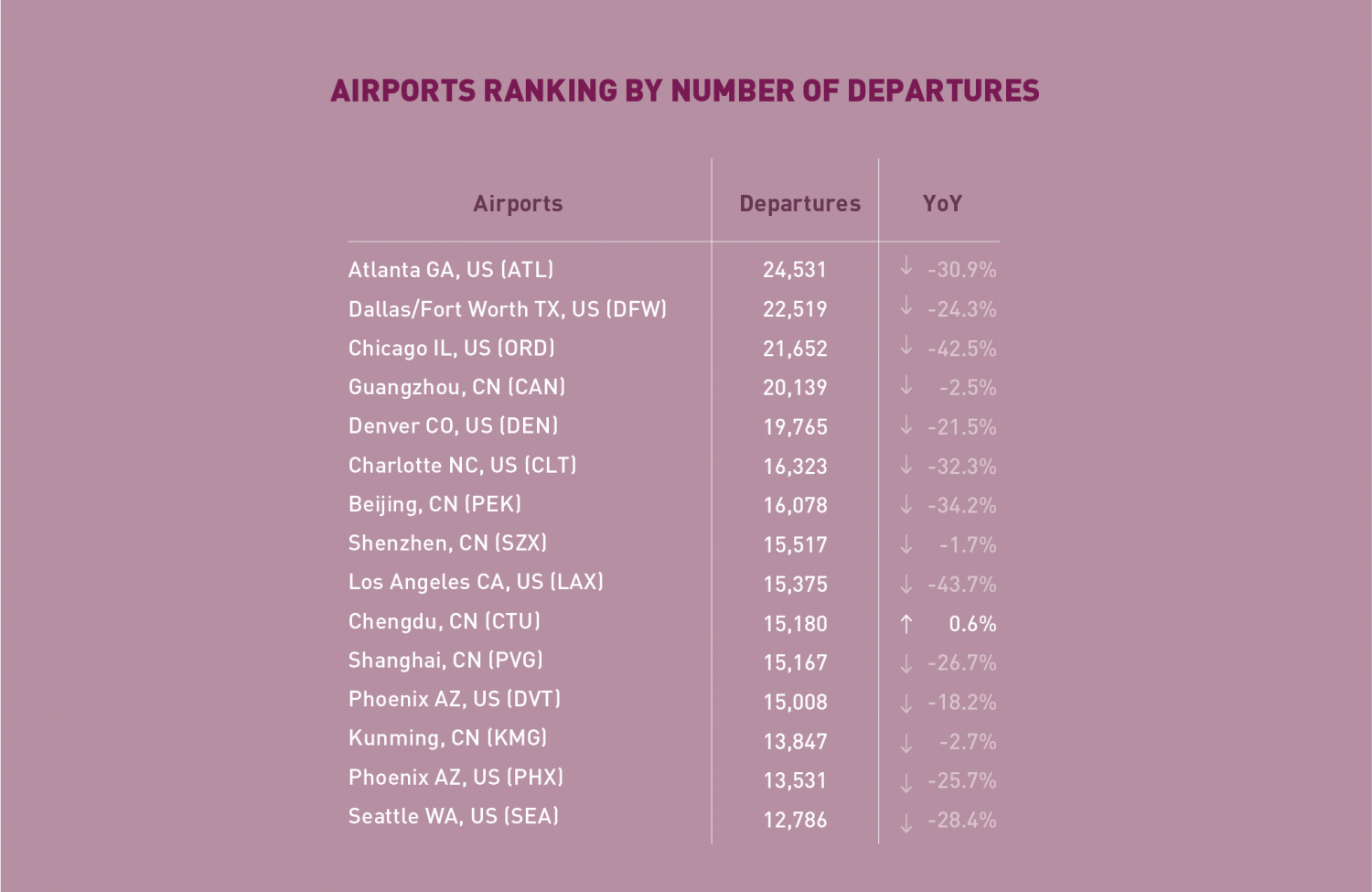 In terms of aircraft departures, the Top 15 airports reported a combined fall of -25.3% YoY. The Top 15 list was still dominated by US and Chinese airports. Chengdu became the only airport reporting positive growth (+0.6%), and for the third consecutive month. Atlanta ranked 1st with -30.9% decline, followed by Dallas/Fort Worth and Chicago. 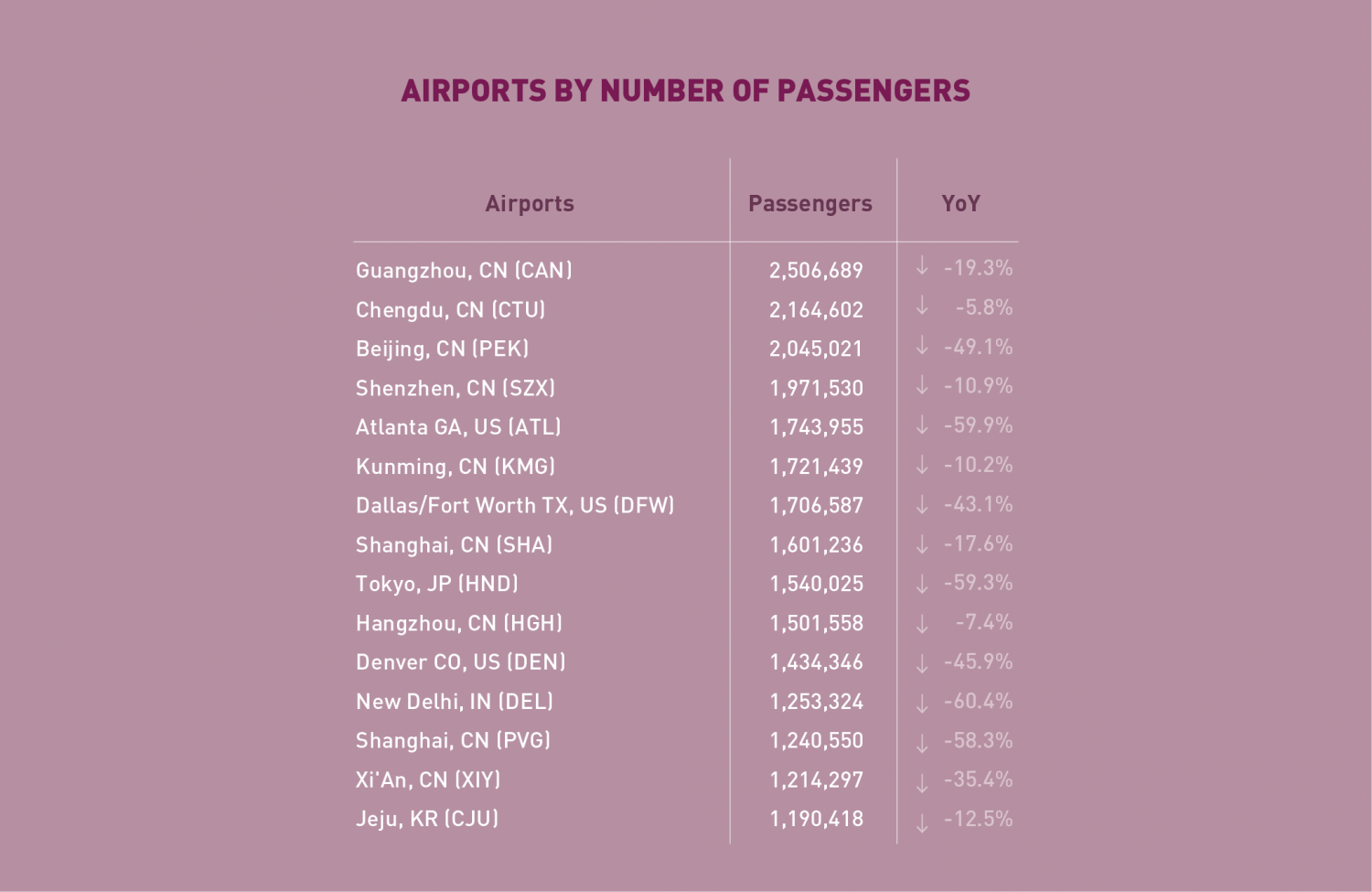 In terms of passengers, the Top 15 airports posted a total fall of -38.4% YoY. The majority of the Top 15 airports were in Asia/Pacific, with over half being Chinese airports. Guangzhou retained 1st place, followed by Chengdu and Beijing. Significant improvement was observed in Tokyo supported by the domestic Go-To Travel campaign. New Delhi, Jeju, and three US airports also ranked in the Top 15. 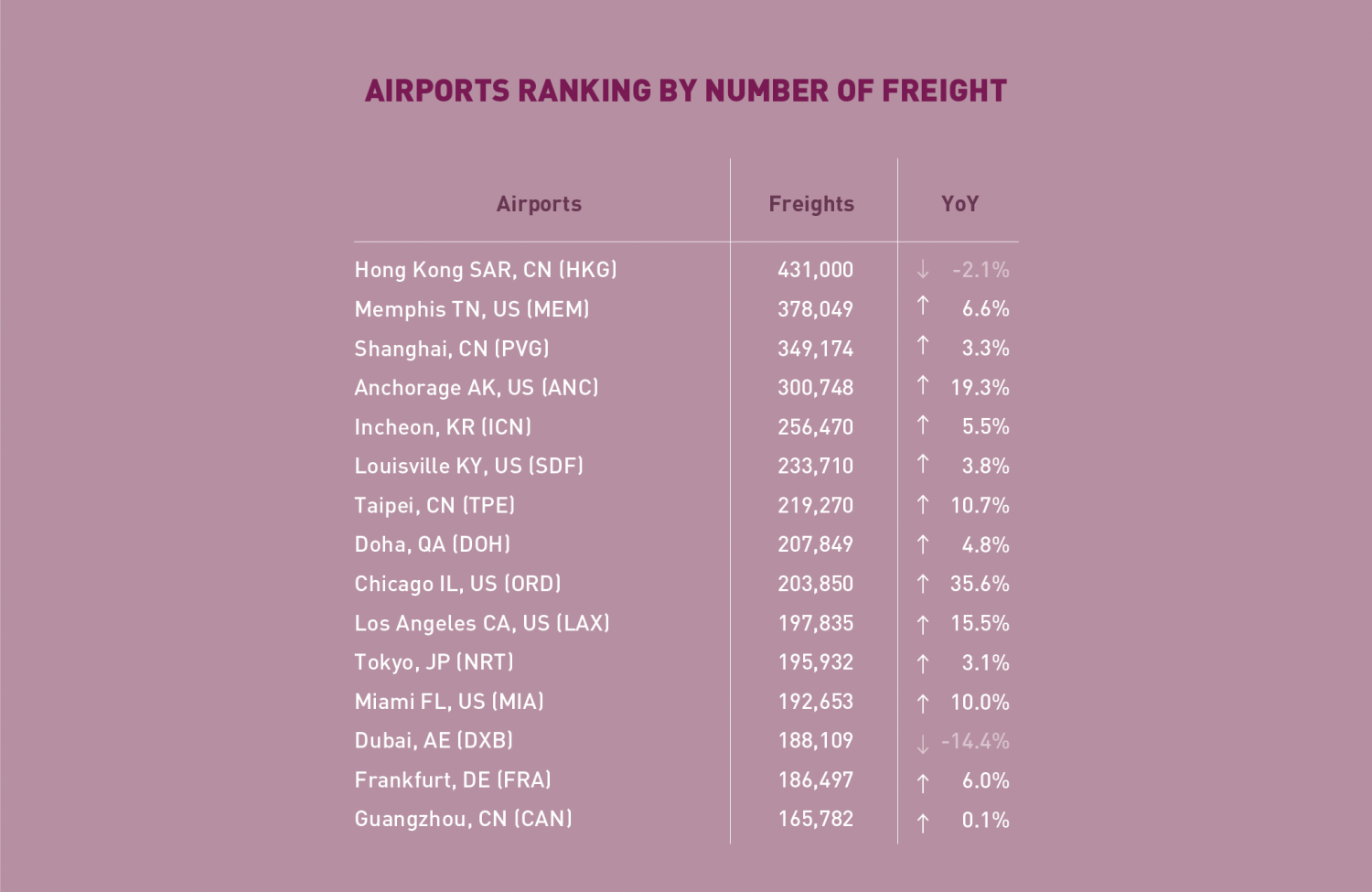 In terms of freight, the Top 15 airports reported a YoY increase of +6.0%, recording sixth consecutive monthly growth since June. Only two airports, Hong Kong and Dubai, posted declines. The former, however, overtook Memphis and became 1st. The strongest expansion was recorded by Chicago (+35.6%), followed by Anchorage (+19.3%). 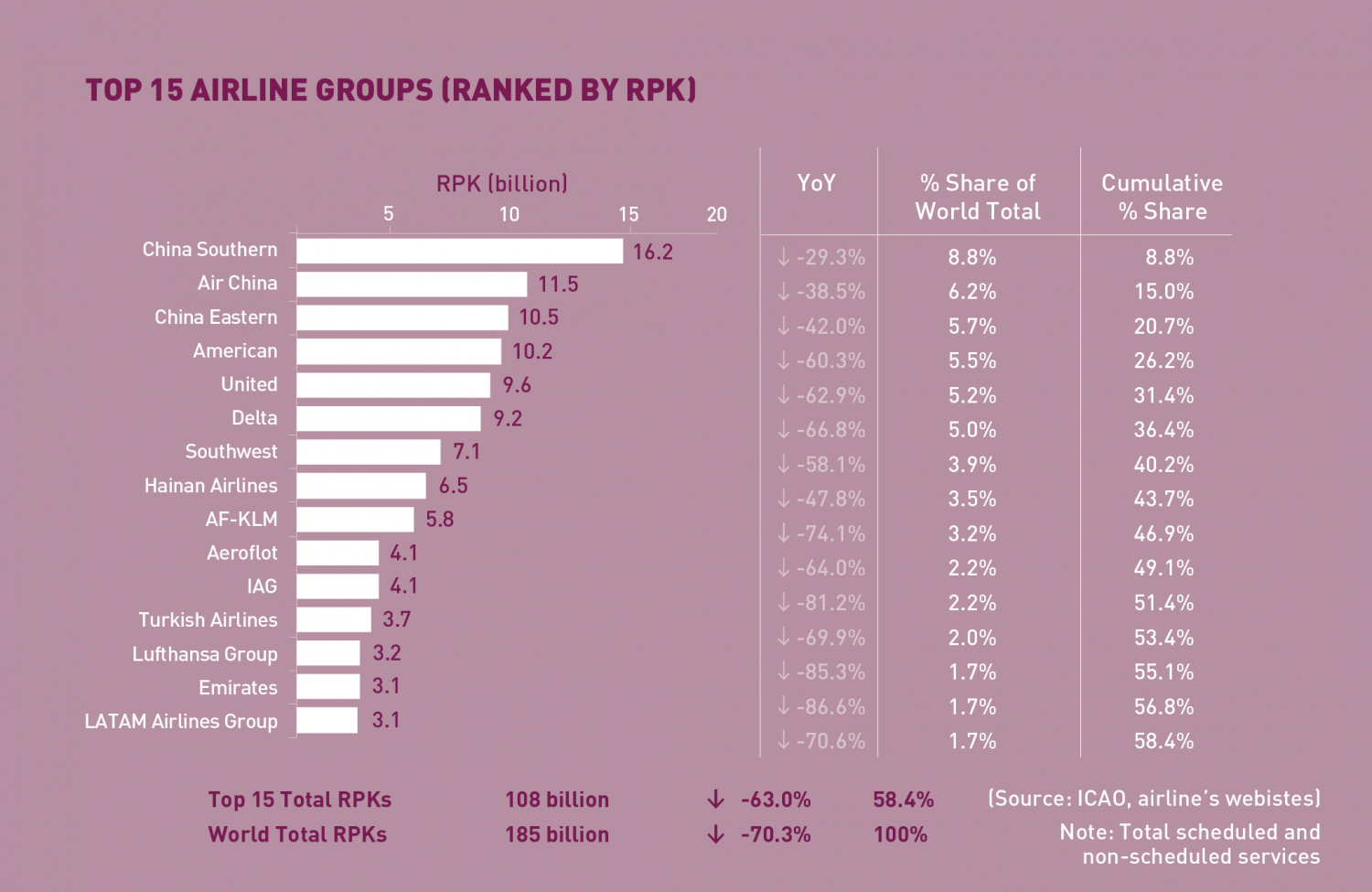 In terms of RPK, the Top 15 airline groups accounted for 58.4% of the world’s total RPK in November 2020 and declined by –63.0% YoY. This decline was 7.3 percentage points smaller than the fall in world’s average RPK, with all airlines in the Top 15 posting contractions.

Top 15 ranking fluctuated in the month of November due to the uneven impact of the renewed outbreaks on air travel recovery across regions.

China Southern, Air China, and China Eastern retained the Top 3 positions and demonstrated the most resilience within the Top 15, albeit with slight moderation. Hainan Airlines climbed up one position to 8th while maintaining a similar level of traffic as the previous month.

Four US airlines, American, United, Delta and Southwest, occupied the places of 4th to 7th, with YoY traffic decline ranging from -58 to -67% – slight improvements from October owing to the increased travel during Thanksgiving holidays. Southwest ranked one position up to 7th, improving faster than the other three US airlines.

Airlines in Europe saw further deterioration in traffic recovery, impacted by the surge in COVID-19 cases and the associated more strict measures. Five airlines in the region ranked between 9th and 13th. AF-KLM dropped two positions to 9th, whereas the others stayed relatively stable.

For the first time since April 2020, Emirates and LATAM reappeared in the Top 15, and ranked at 14th and 15th, respectively. 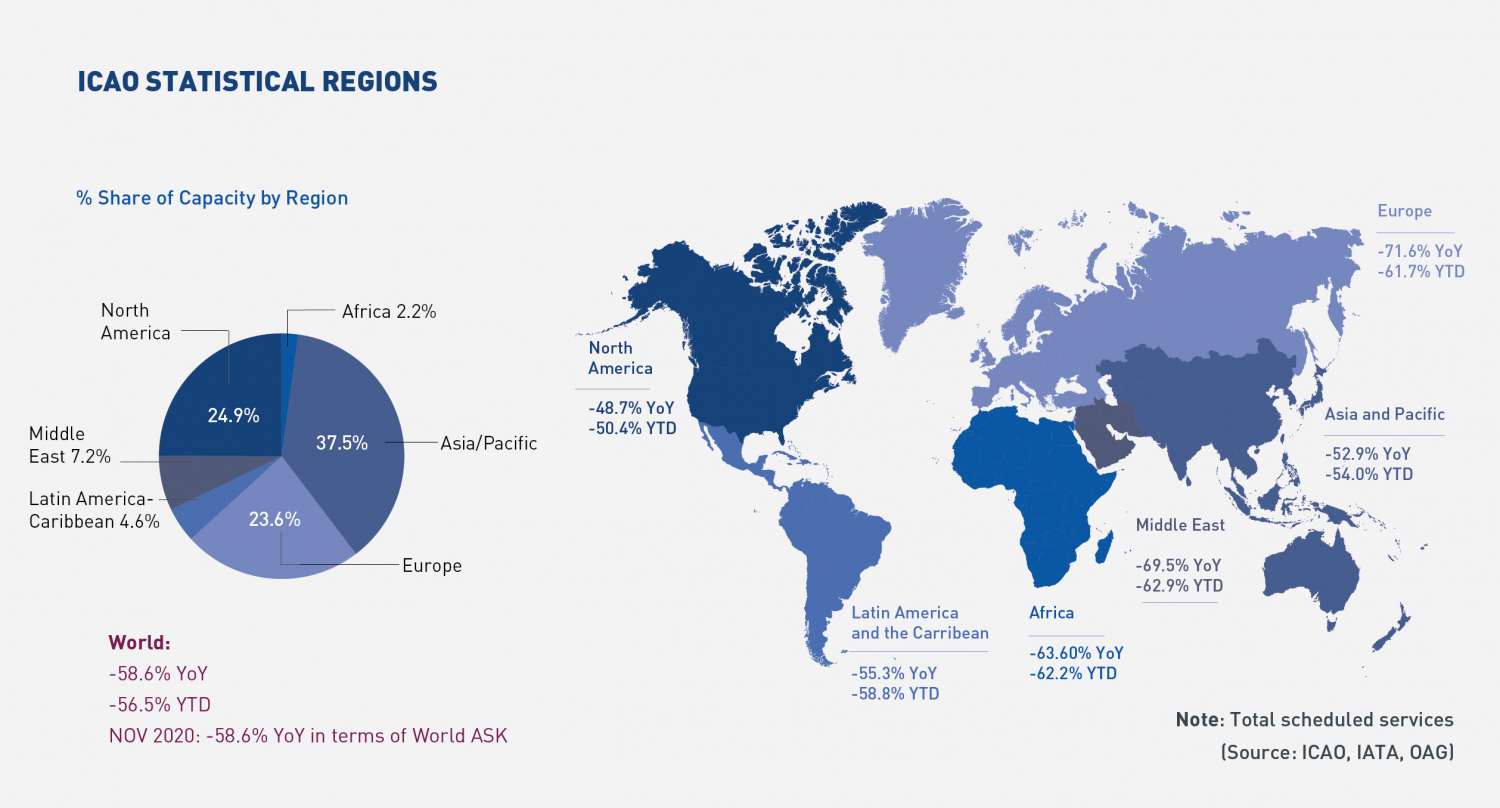 Worldwide capacity contracted by -58.6% YoY in November 2020. All regions saw increases in capacity, except for Europe where further reduction was shown, severely impacted by the elevated infection rates.

The fastest increase in capacity was recorded by Latin America/Caribbean and North America; the latter also showed the smallest capacity declines among all regions.