World Results and Analyses for November 2020 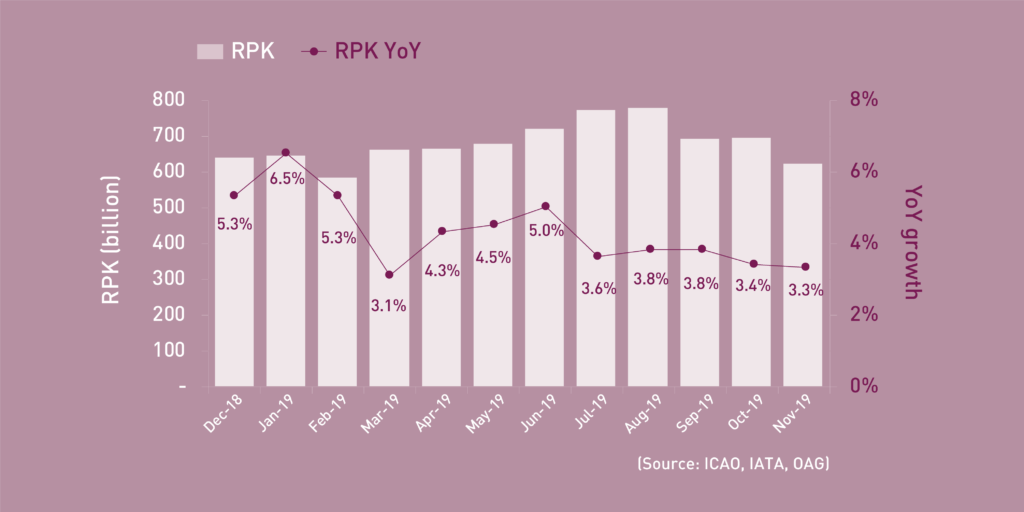 World passenger traffic grew by +3.3% YoY in November 2019, -0.1 percentage point lower than the growth in the previous month. Three regions posted a slowdown with Europe experiencing the most significant deceleration becoming the weakest performing region. The Middle East continued to show acceleration and remained as the fastest-growing region. Domestic traffic in India picked up sharply and regained double-digit growth, followed by relatively moderate increases in China and Japan. 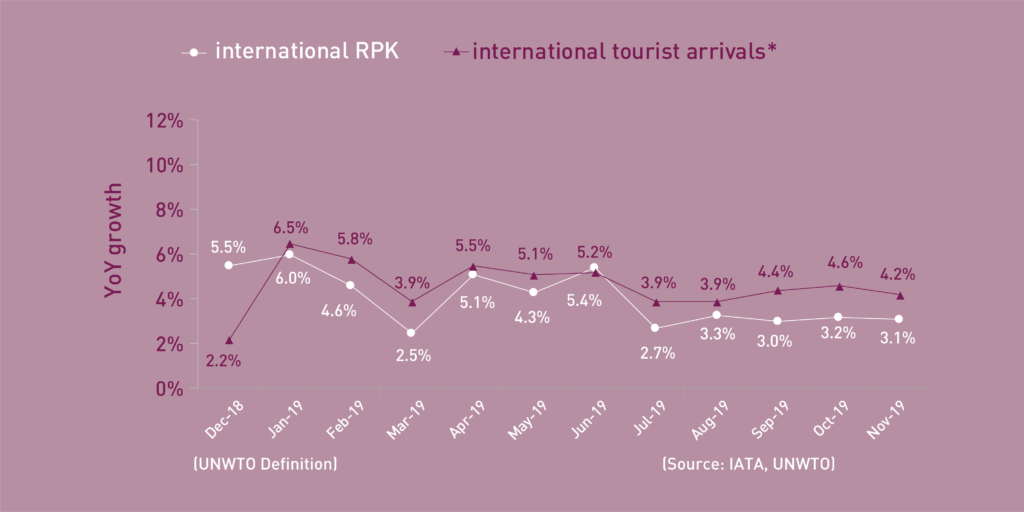 International passenger traffic grew by +3.1% YoY in November 2019, -0.1 percentage point lower than the growth in the previous month. The Middle East recorded the strongest growth and remained as the fastest-growing region. By contrast, traffic growth in Latin America/Caribbean further deteriorated and continued to be the only region with contraction. The growth of international tourist arrivals* remained relatively stable. 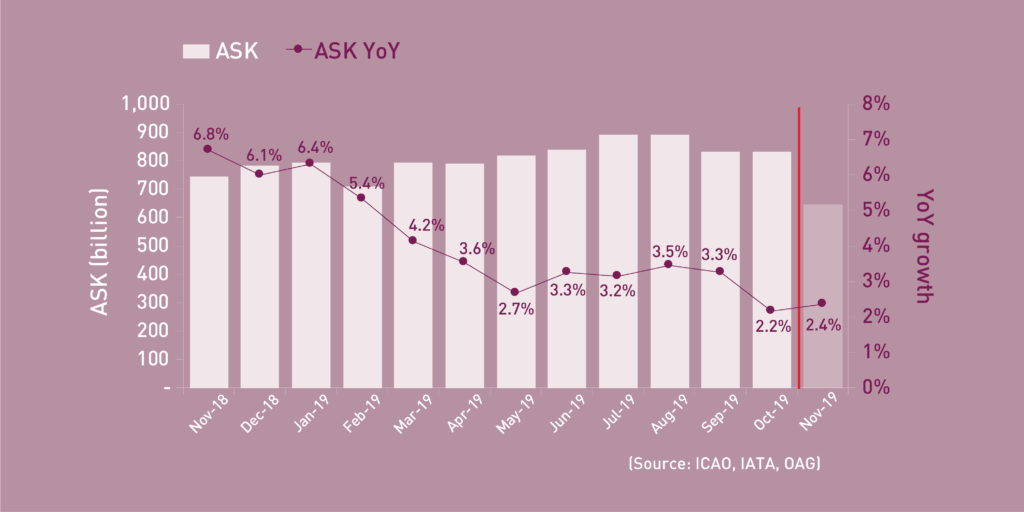 Capacity worldwide increased by +1.8% YoY in November 2019, – 0.4 percentage point lower than the growth in the previous month (+2.2%). According to the airline schedules, capacity expansion is expected to be up to +3.2% in December 2019. 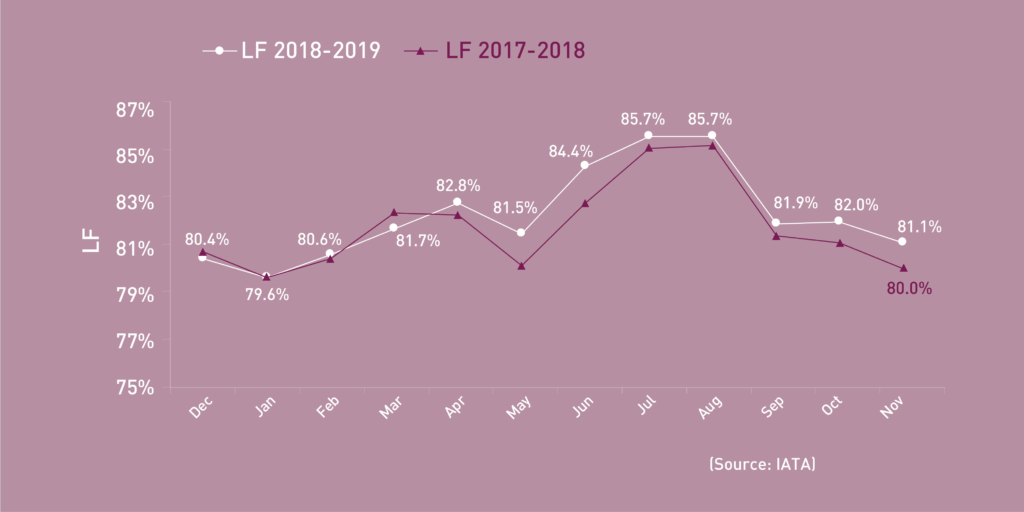 The passenger Load Factor reached 81.1% in November 2019, -0.9 percentage point lower than the previous month. As traffic growth outpaced the capacity expansion, the November LF was +1.1 percentage point higher compared to the rate in the same period of 2018. 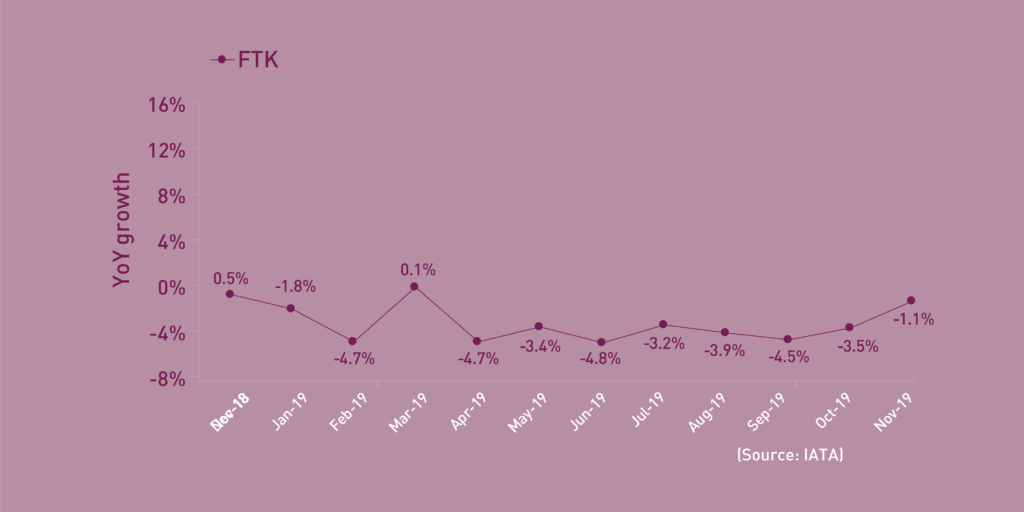 World freight traffic reported a decline of -1.1% YoY in November 2019, +2.4 percentage points higher than the growth in the previous month. Although freight traffic growth remained negative, this was by far the smallest deficit in the last eight months. This modest improvement may be owing to the seasonally busy e-commerce sales events such as Black Friday. On a regional basis, Africa remained as the major contributor to the improvement with its brisk double-digit growth. Another contribution came from Europe which rebounded to positive growth. All the other regions continued to post declines with Asia/Pacific being the weakest performing region accounting largely for the overall decline. 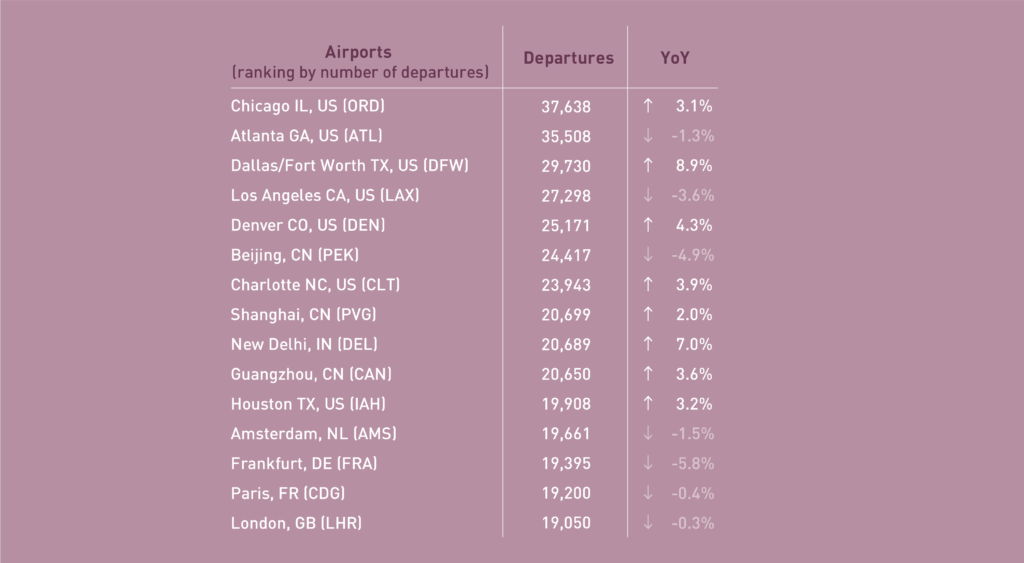 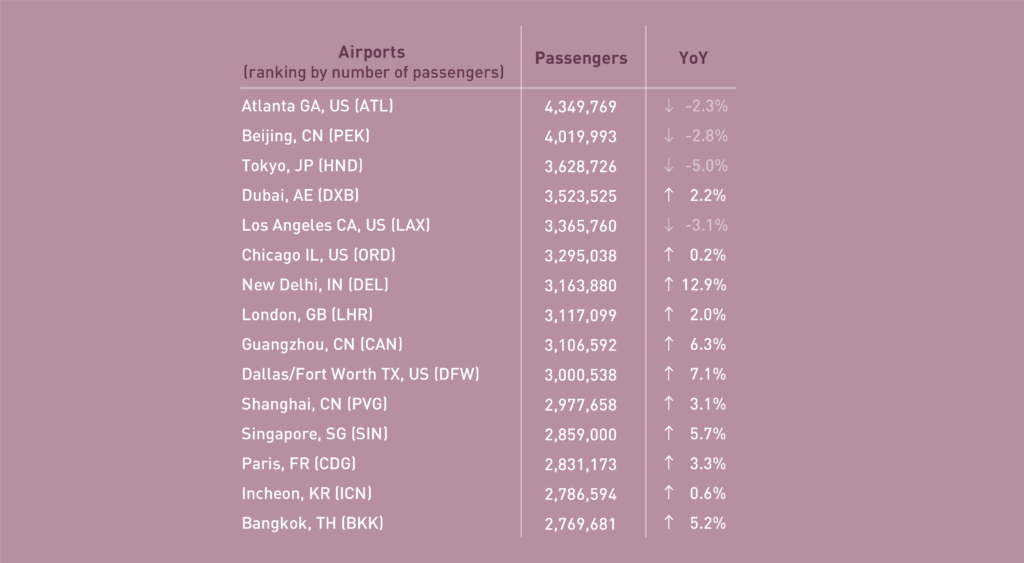 In terms of passengers, the Top 15 airports reported a growth of +1.8% YoY. Eleven out of the Top 15 airports posted YoY increases. Atlanta remained at 1st, albeit with a decline of –2.3% . New Delhi recorded the most significant growth at +12.9%. Decline was observed in major hubs in Asia/Pacific and North America with Tokyo contracting the most by -5.0%. 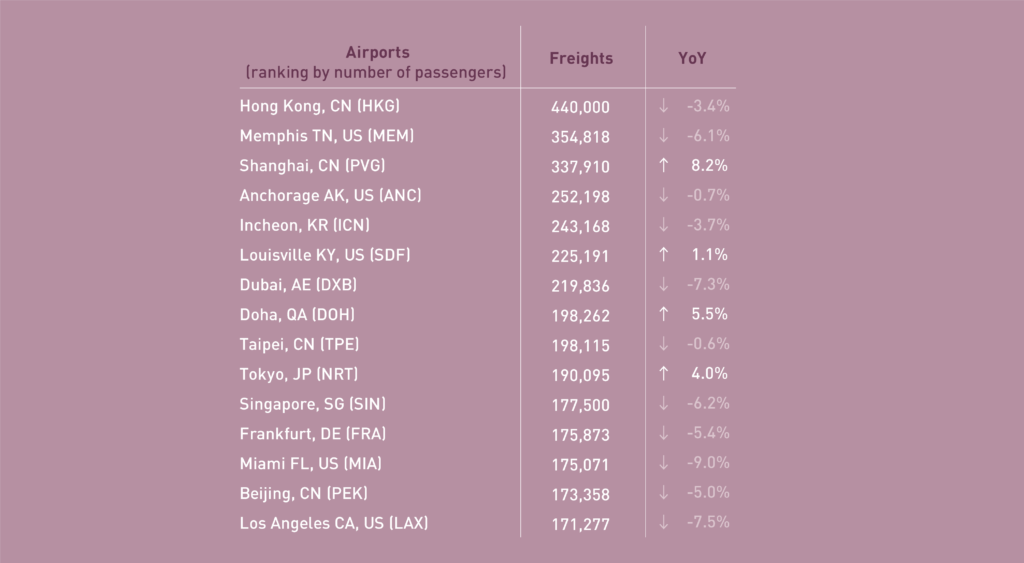 In terms of freight, the Top 15 airports reported a decline of -3.5% YoY. Freight traffic remained weak with over half of the Top 15 airports posting declines. Shanghai, at 3rd position, reported the highest growth of +8.2%, followed by Doha and Tokyo at +5.5% and +4.0%, respectively. The most notable decrease was posted by Miami at -9.0%, followed by Los Angeles at -7.5%. 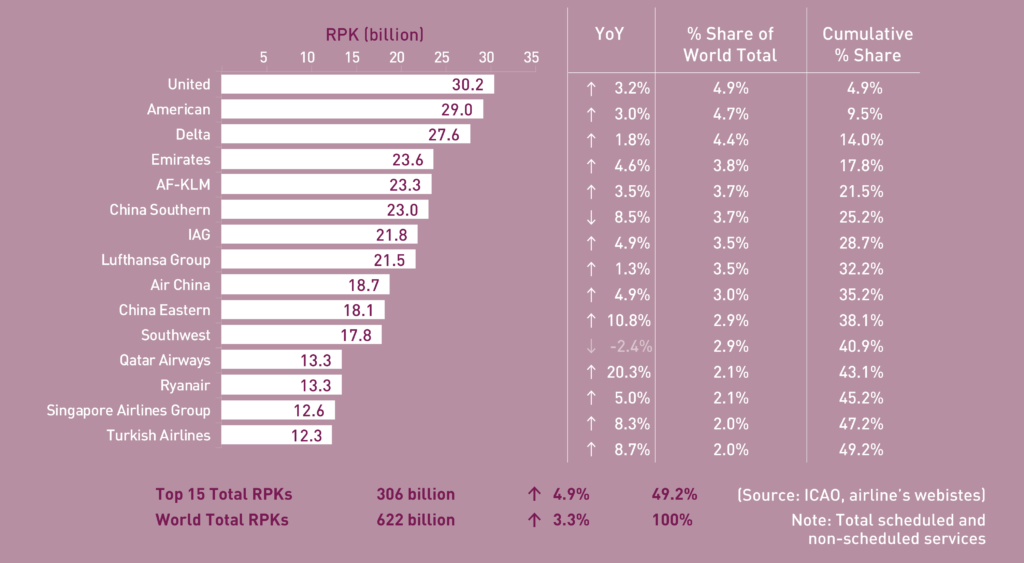 United ranked 1st with moderate growth of +3.2%, followed closely by American which grew by +3.0% and elevated 1 position to the 2nd. Delta dropped 1 position to the 3rd and grew marginally by +1.8%. Southwest decreased by -2.4% while remained at 11th.

Worldwide capacity expansion eased to its slowest pace of the year at +1.8% YoY in November 2019. The overall slowdown was attributed to the deceleration in Africa, Europe and the Middle East, with the latter two regions posting YoY decline in capacity expansion. North America became the fastest expanding region followed closely by Asia/Pacific. On the year-to-date basis, Asia/Pacific and Africa were the fastest expanding regions.