The numbers that are shared in the article below reflect the numbers in October 2021. The analysis of the economic and aviation indicators we share here reflect the continuing impact of COVID-19 on this industry.

World Results and Analyses for October 2021 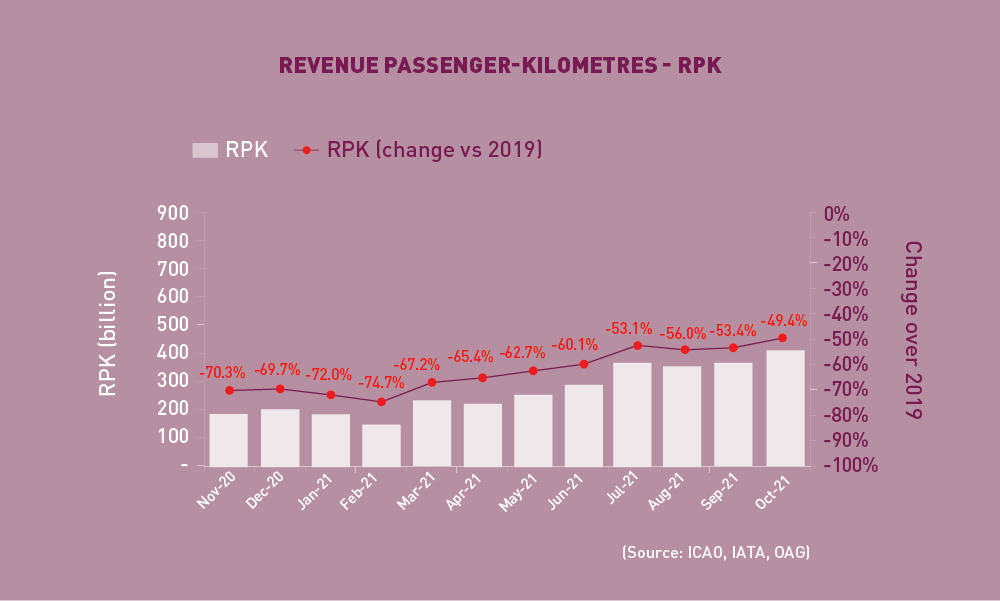 World passenger traffic fell by -49.4% in October 2021 (compared to 2019), +4.0 percentage points up from the decline in the previous month. Recovery in air travel progressed slightly, supported by the rising vaccination rates and stabilization in new infections. Nonetheless, risk of outbreak resurgence remains and poses significant uncertainty to a steady recovery in the coming months. Domestic market of the Russian Federation demonstrated the most resilience, which has exceeded the pre-crisis levels since the beginning of the year. 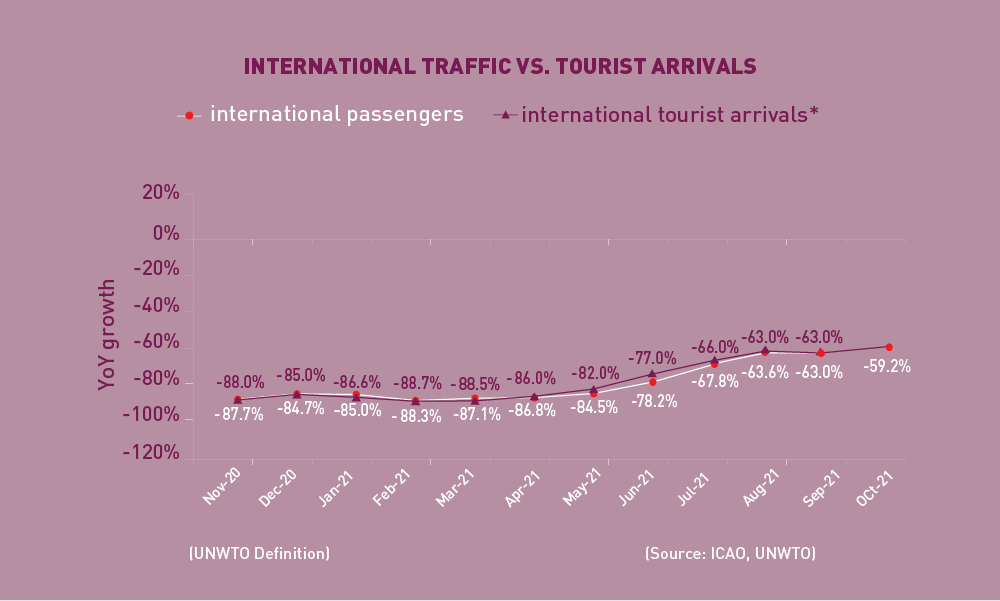 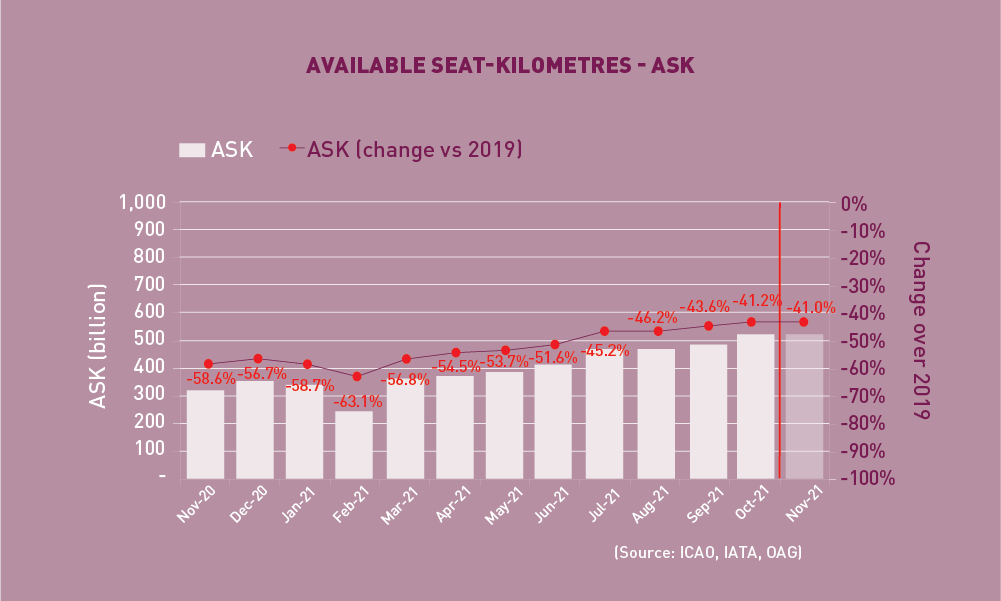 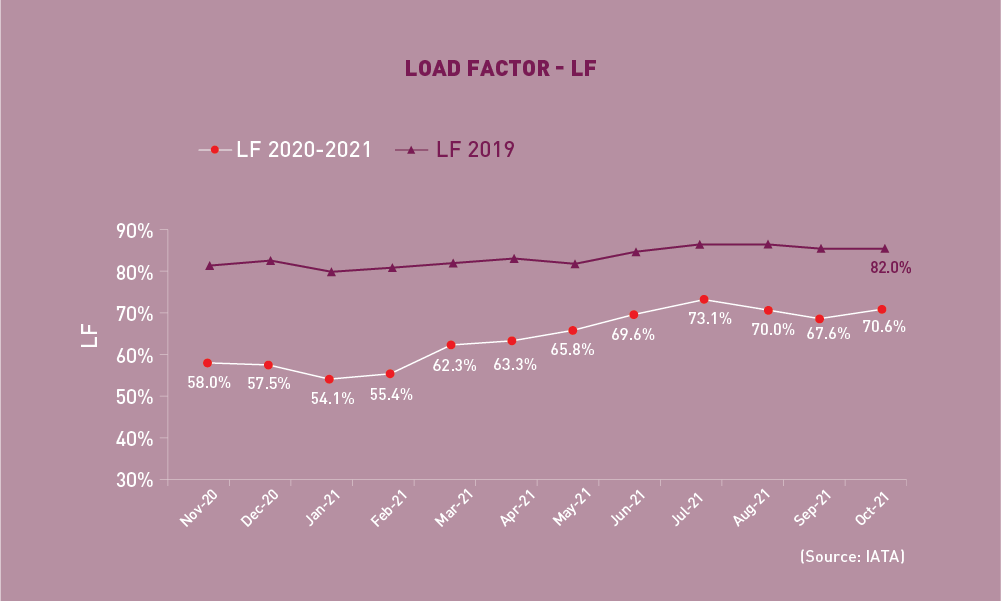 The passenger Load Factor reached 70.6% in October 2021, +3.0 percentage points higher than the previous month. Load factor of the month improved as the air travel demand increased more than the capacity. Despite the improvement, the October LF remained -11.4 percentage points below the 2019 levels. 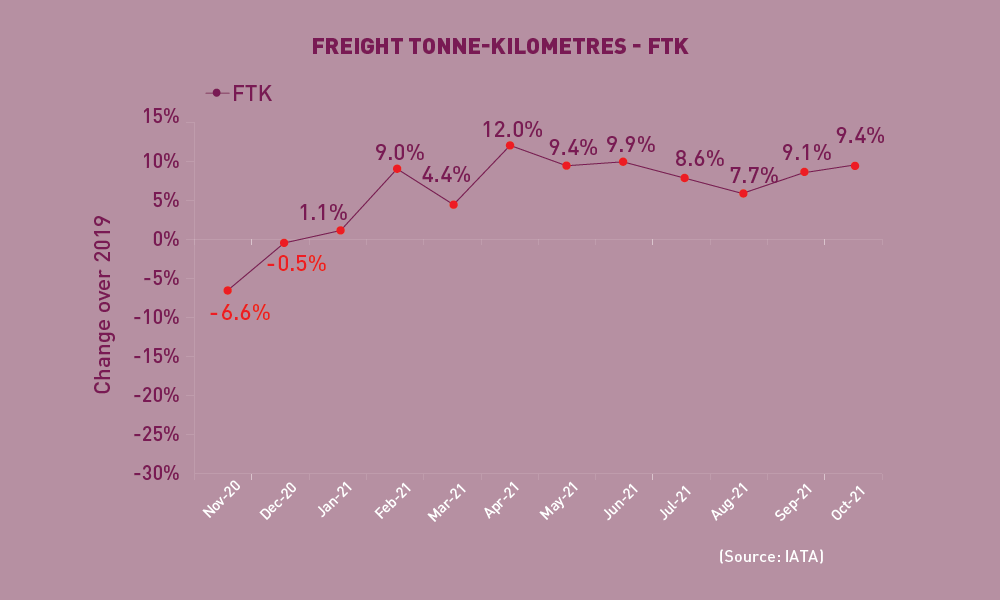 World freight traffic reported a growth of +9.4% in October 2021 (compared to 2019), +0.3 percentage points up from the growth in the previous month. Air cargo continued to benefit from the the supply chain congestion which has caused temporary shift of freight from sea to air. To meet the strong demand of the upcoming major year-end consumer events, businesses and shippers are likely to favor air cargo over other modes of air transport. Performance diverged across regions. While Asia/Pacific and Europe were the main contributors to the improvement of this month, traffic in Africa and the Middle East deteriorated. Latin America/Caribbean improved significantly, however, it remained the only region posting contraction from the 2019 levels. 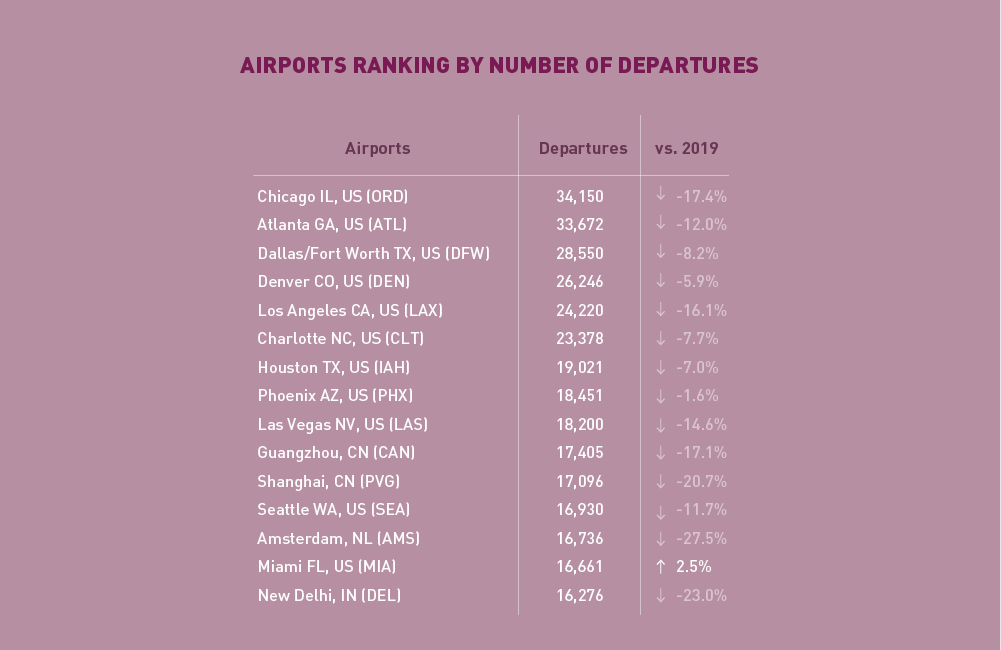 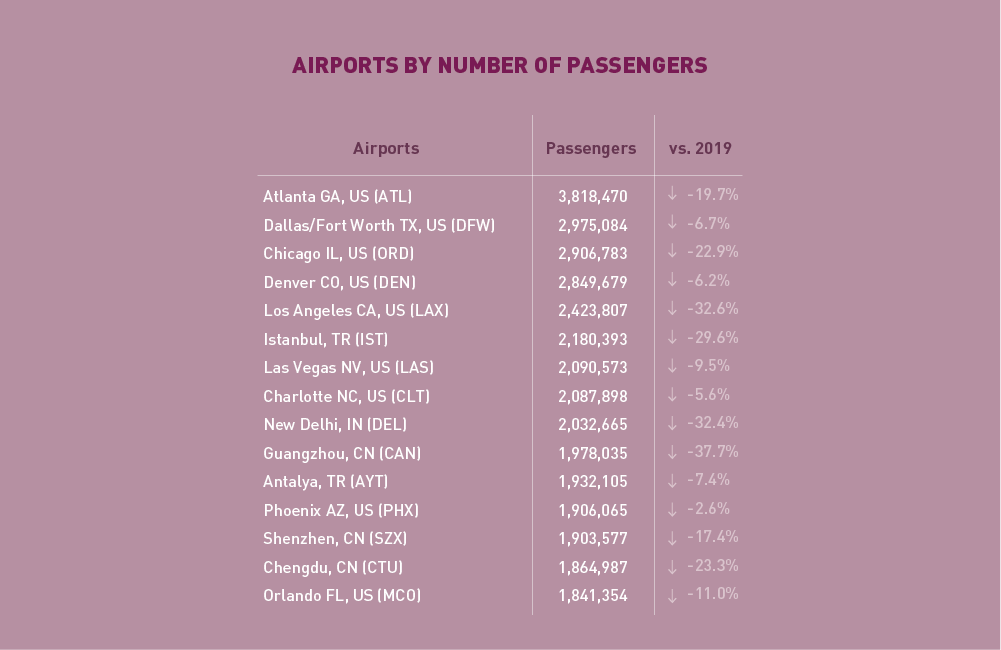 In terms of passengers, the Top 15 airports posted a total fall of -19.1%, compared to 2019. The Top 15 list was dominated by US airports and a few airports in Asia/Pacific and Europe. Guangzhou and Los Angeles recorded the largest fall of -37.7% and -32.6%, while Phoenix and Charlotte recorded the smallest fall of -2.6% and -5.6%, respectively. 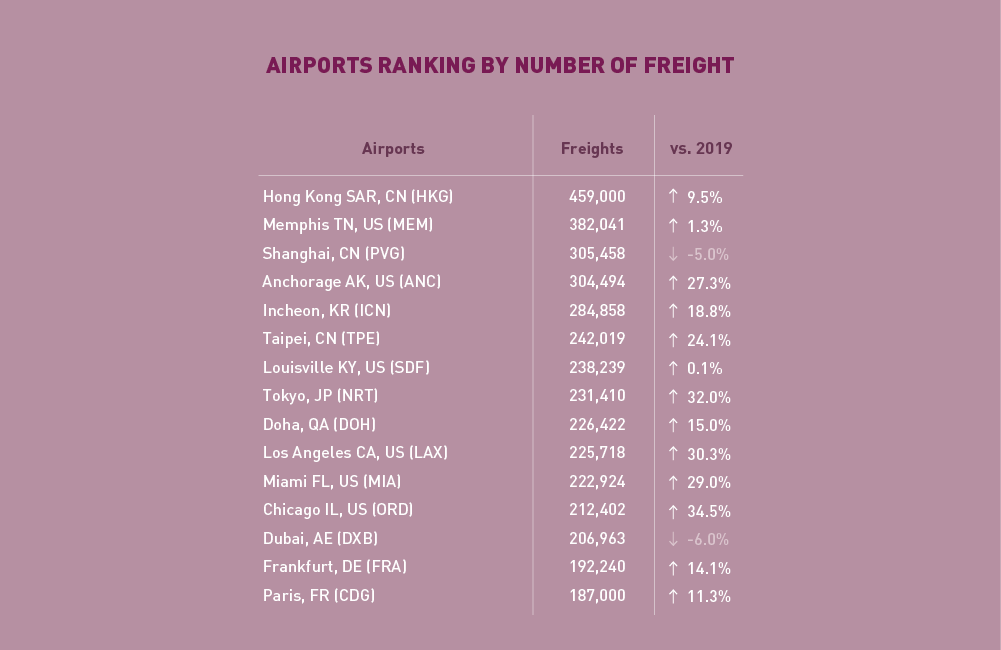 In terms of freight, the Top 15 airports reported an increase of +13.2%, compared to 2019. Over half of the Top 15 airports grew double-digitally, with the strongest increase in Chicago (+34.5%) and Tokyo (+32.0%). Hong Kong retained the 1st position with solid growth of +9.5%. Shanghai and Dubai continued to post modest declines. 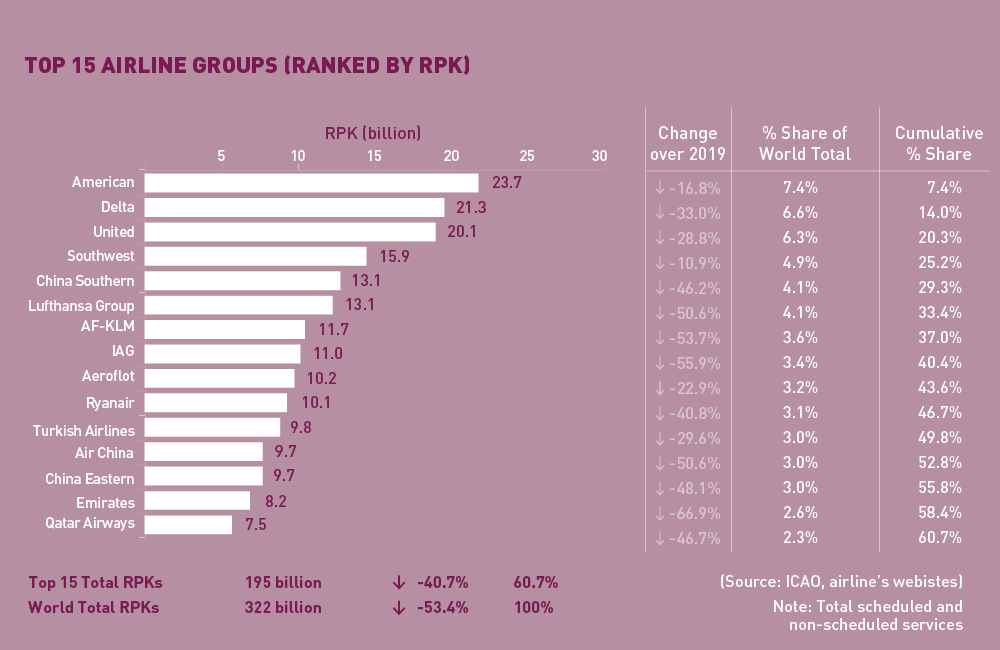 Compared to September, the Top 15 ranking was relatively stable with a small shift in positions, mostly among the European airlines. US airlines retained the Top 4 positions with American ranked 1st, followed by Delta, United and Southwest. As it has been the case in the previous months, American and Southwest posted much smaller declines from 2019 levels.

The domestic passenger traffic in China picked up but at a slow pace, as travel restrictions remained strict. The three major Chinese airlines, China Southern, Air China and China Eastern maintained the same positions of 5th, 12th and 13th. International travel continued to be supportive to European airlines on the back of easing travel restrictions. Lufthansa kept the 6th place, while AF-KLM and IAG improved 1 position to 7th and 8th, respectively.

Qatar Airways and Emirates maintained the last two positions within the Top 15, with the latter recording the largest contraction from 2019 levels. 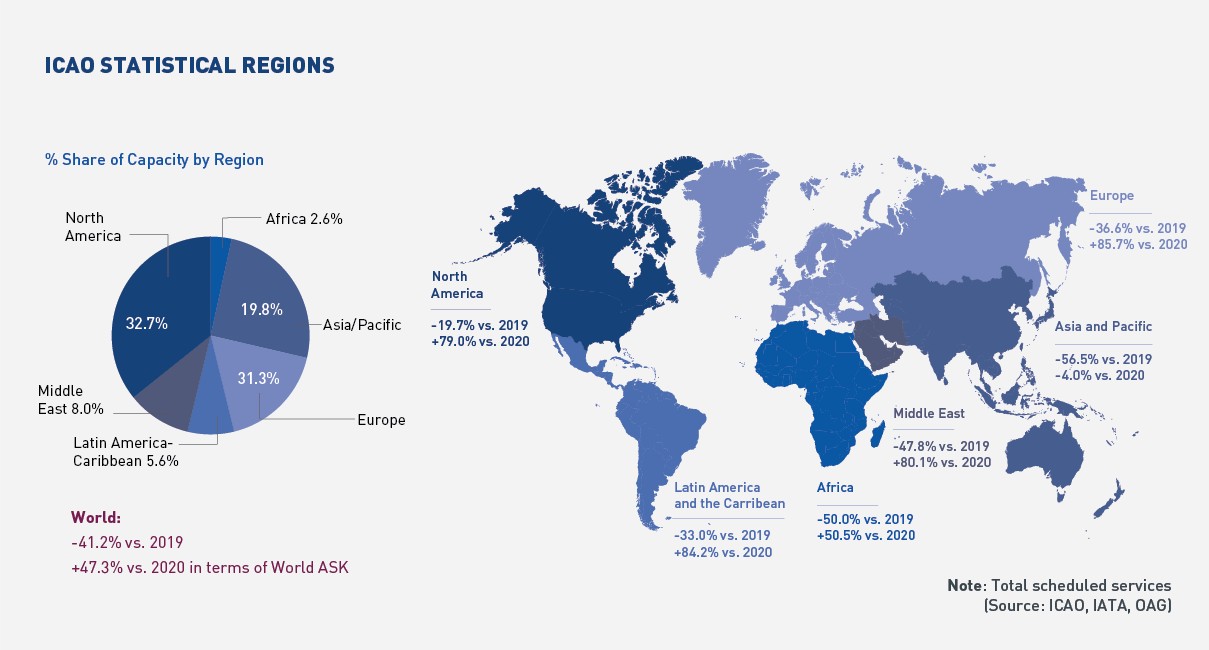 Worldwide capacity contracted by -41.2% in October 2021, compared to 2019, a slight improvement from the contraction in October. All regions recorded smaller contraction compared to the previous month, especially Europe and the Middle East. The largest contraction was recorded by Asia/Pacific, where capacity was even lower than the level in the same month of 2020.