The numbers that are shared in the article below reflect the numbers in June 2022. The analysis of the economic and aviation indicators we share here reflect the continuing impact of COVID-19 on this industry through aviation's recovery.

The UN recognized ICAO as the central agency responsible for the collection, analysis, publication, standardization, improvement, and dissemination of statistics pertaining to civil aviation. Because of its status as a UN specialized agency, ICAO remains independent from outside influences and is committed to consistently offering comprehensive and objective data. Every month ICAO produces this Air Transport Monitor, a monthly snapshot and analysis of the economic and aviation indicators.

World Results and Analyses for June 2022 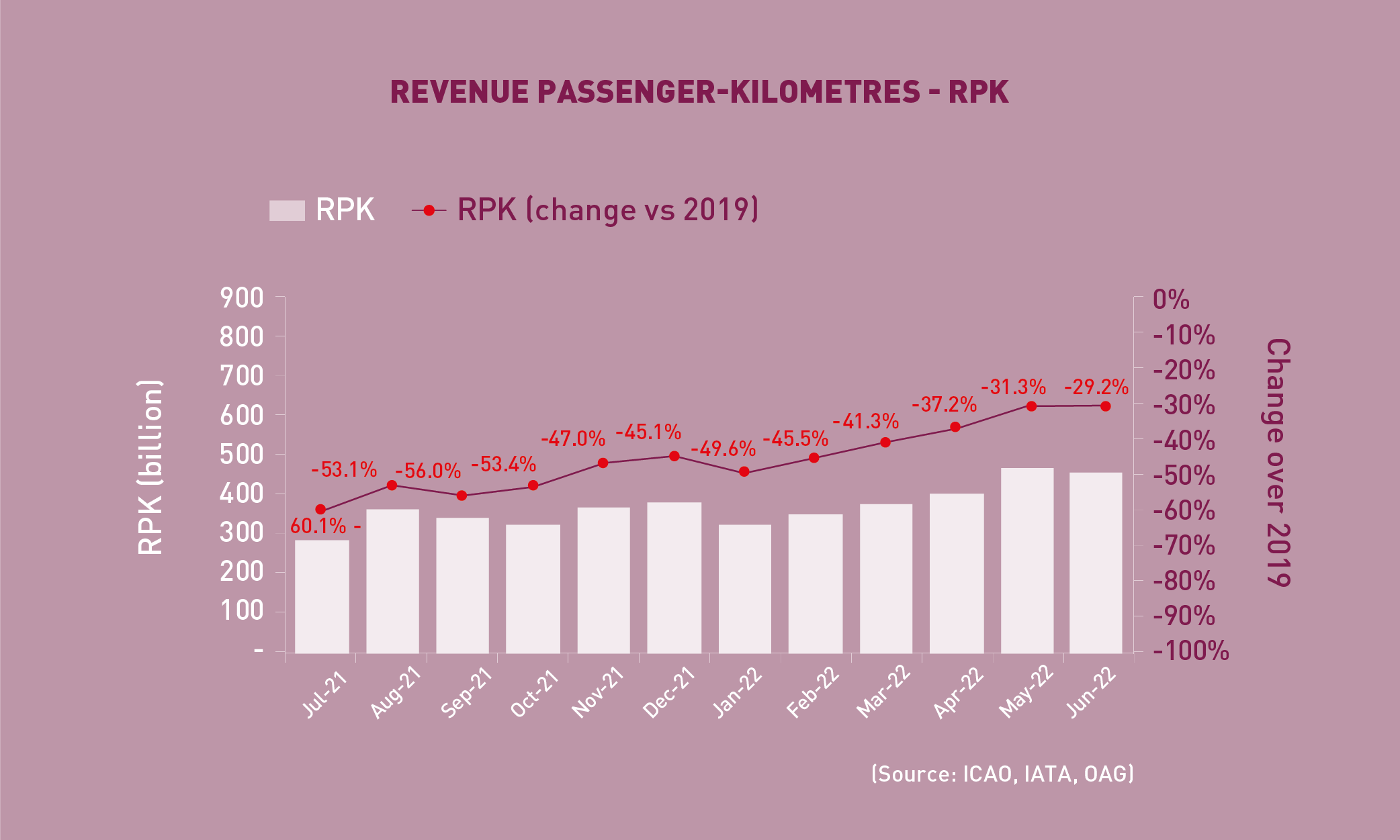 World passenger traffic in June 2022 was -29.2% below the 2019 level, +2.1 percentage points up from the decline in the previous month. Despite the high fuel prices and inflation, the lifting of COVID-19 curbs and pent-up travel demand continued to drive the recovery of air travel. After trending sideways for several months, domestic travel started to rebound, particularly in Asia/Pacific. The region became the main contributor to the improvement, owing to the surge in domestic traffic in China alongside the gradual ease of lockdowns and travel restrictions. 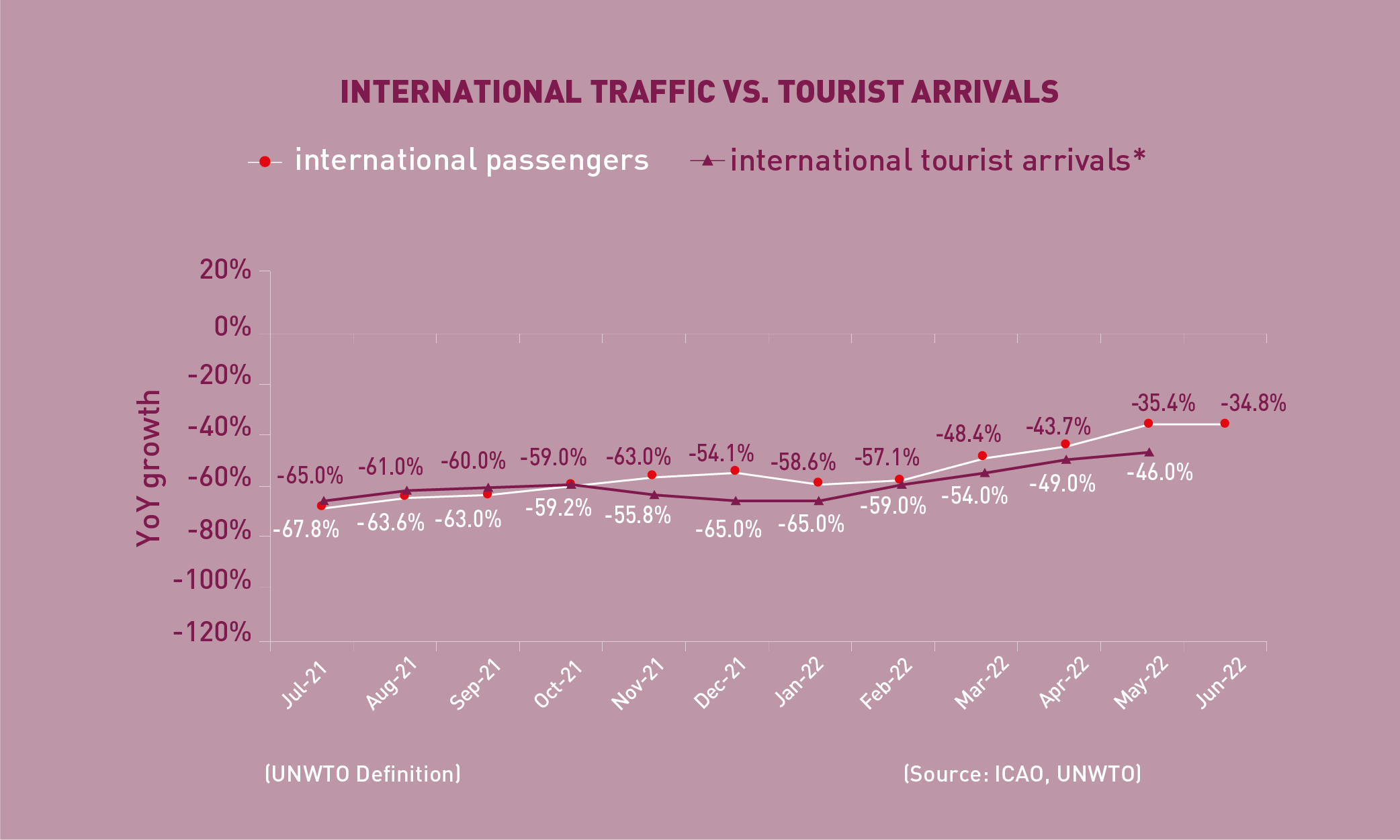 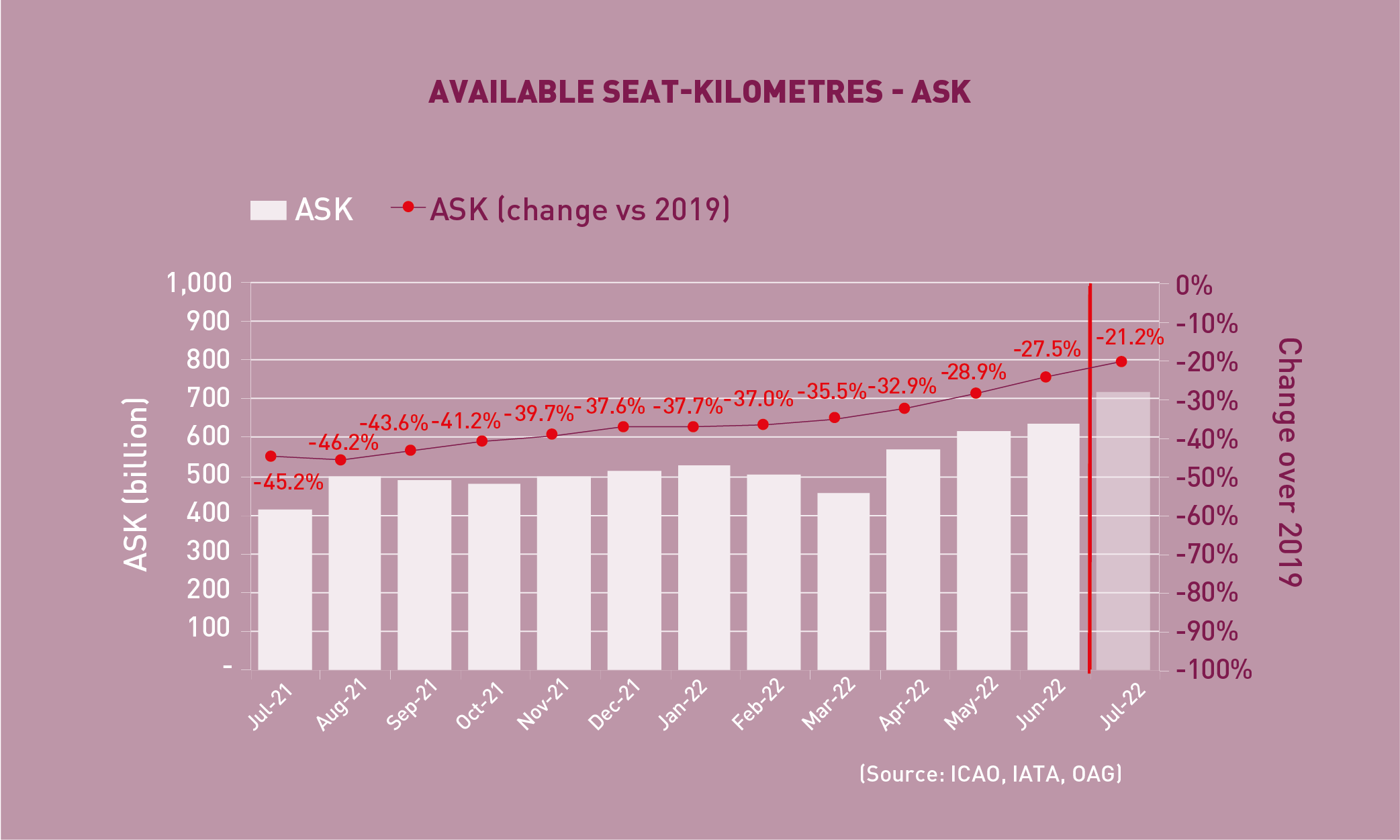 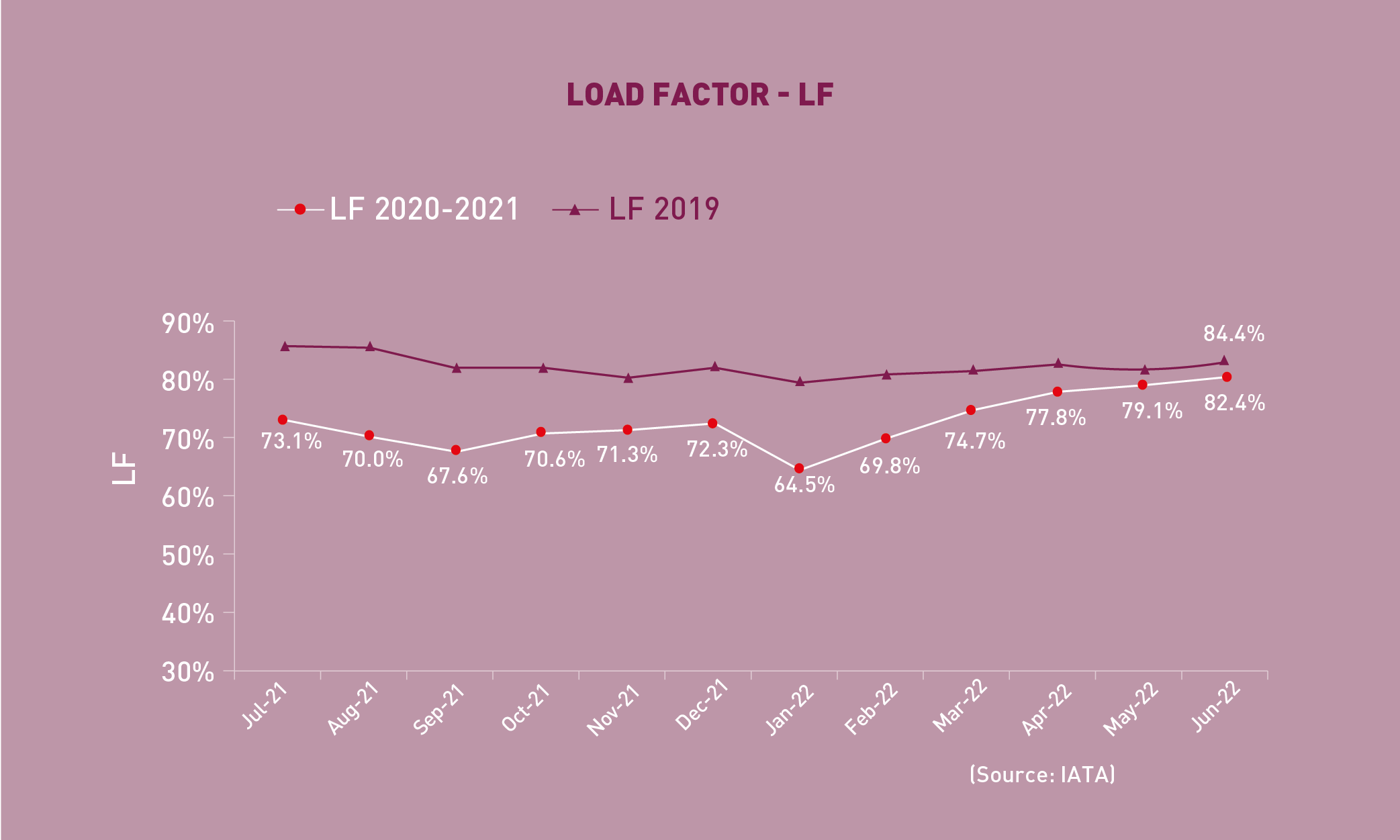 The passenger Load Factor reached 82.4% in June 2022, +3.3 percentage points higher than the previous month. The continued upward trend in load factor drove the June figure -2.0 percentage points down from the level seen in the same month of 2019. 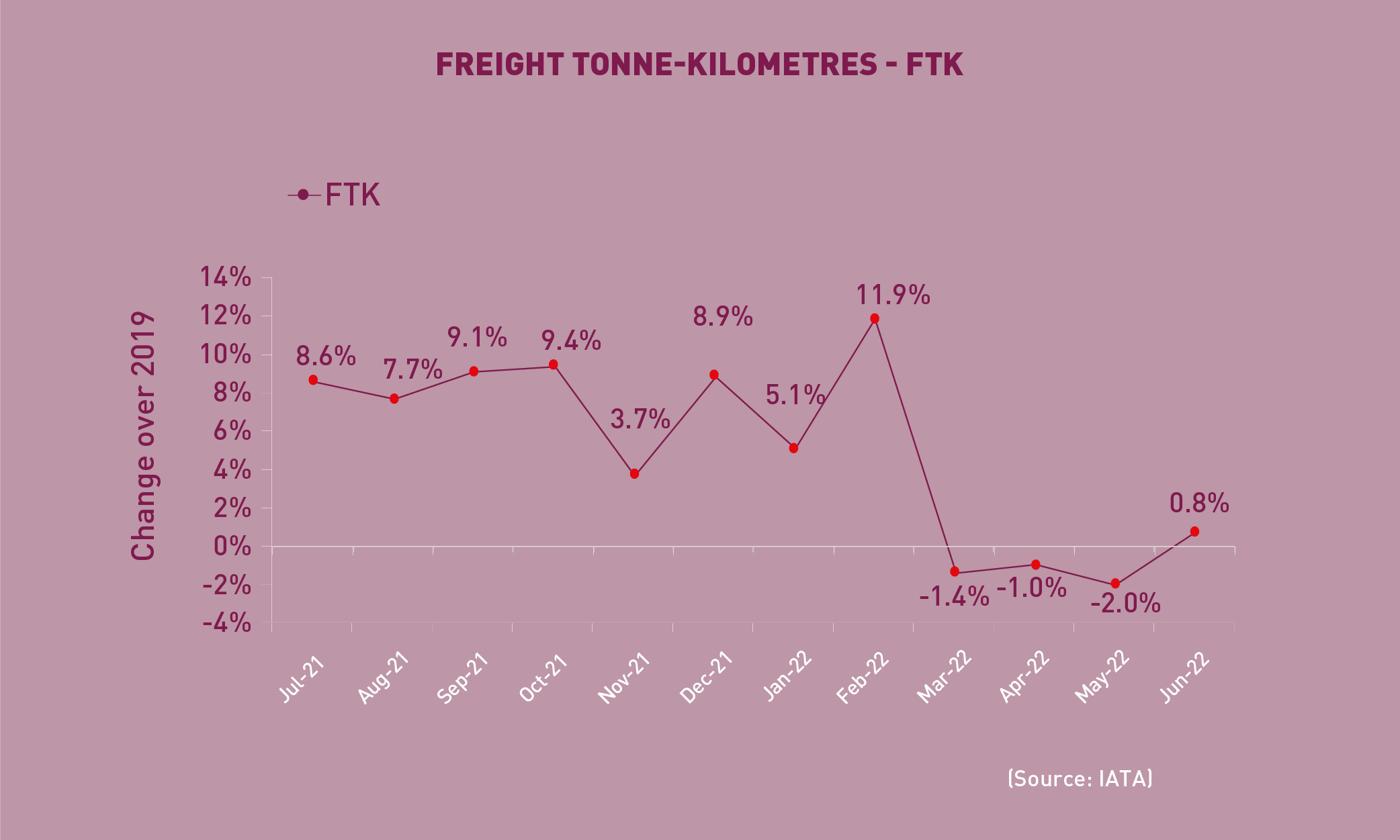 World cargo traffic in June 2022 was 0.8% above the 2019 level, +2.8 percentage points up from the decline in the previous month. Following three months of declines, air cargo traffic growth returned to a positive rate. Facing various headwinds at present, the growth of air cargo in the near term remains uncertain. Three regions, i.e. North America, Africa and the Middle East, posted gains compared to 2019, with the former two increased double-digitally. Europe was the weakest performing region, in part due to the impact of the war on Within Europe market. Asia/Pacific remained below 2019 level, however, it showed significant improvement month-on-month, owing to the ease of lockdown restrictions in China. 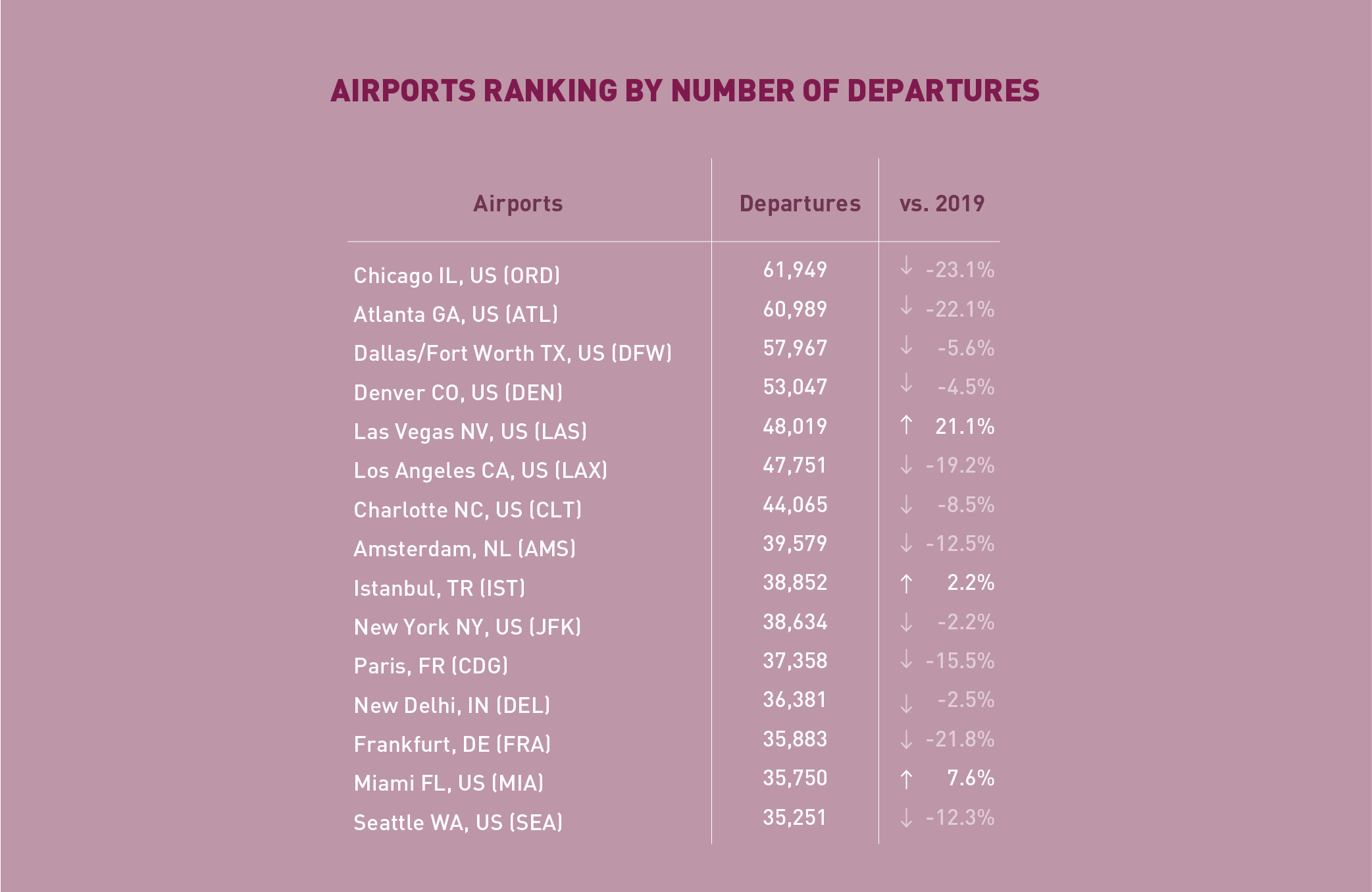 In terms of aircraft movements, the Top 15 airports reported a combined fall of -10.0% compared to 2019. Ten out of the Top 15 airports were US airports. Chicago remained 1st, albeit recording the largest decline of -23.1%. Three airports posted increases, i.e., Las Vegas, Istanbul, and Miami. The former recorded a robust growth of +21.1%. 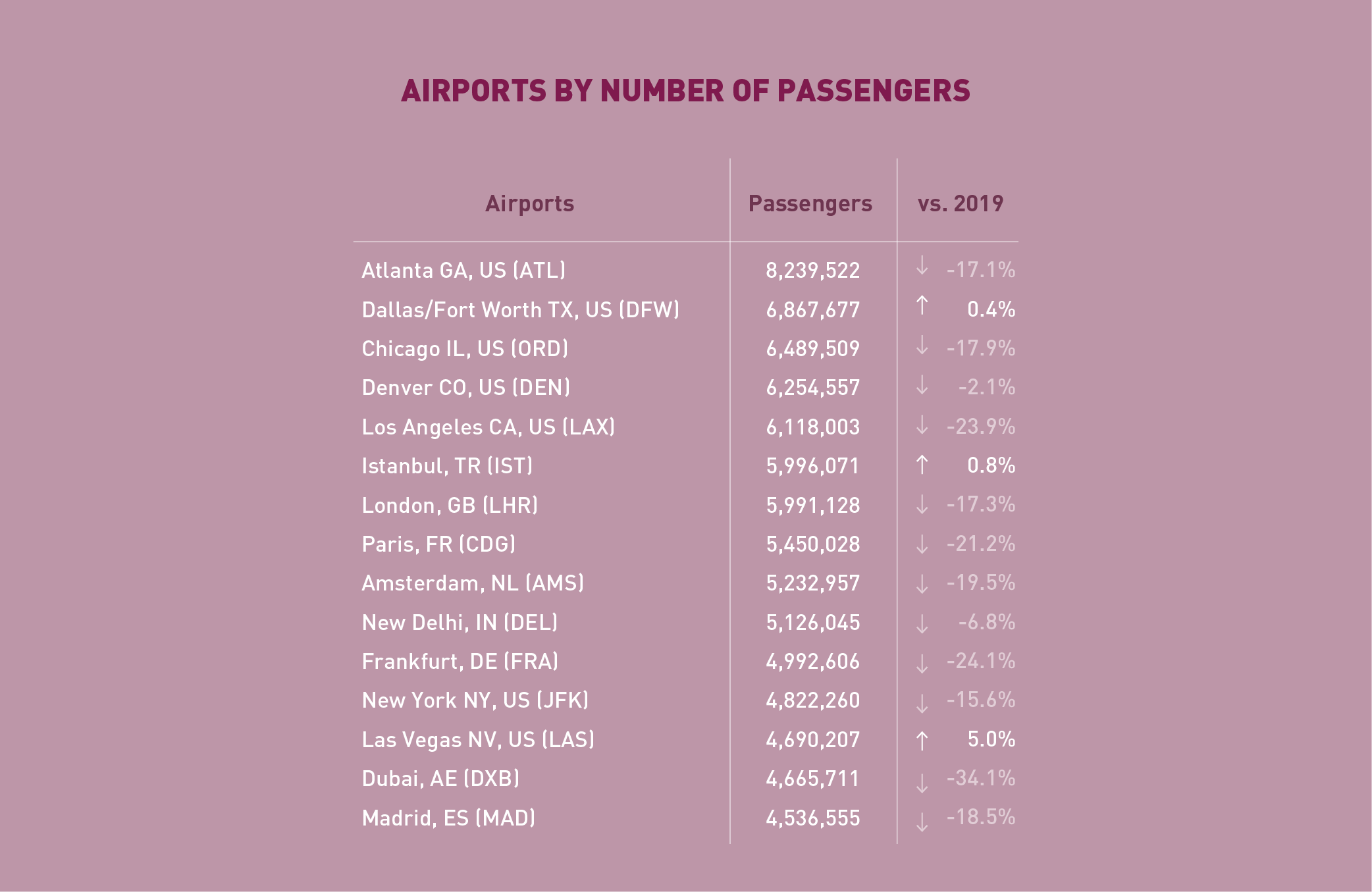 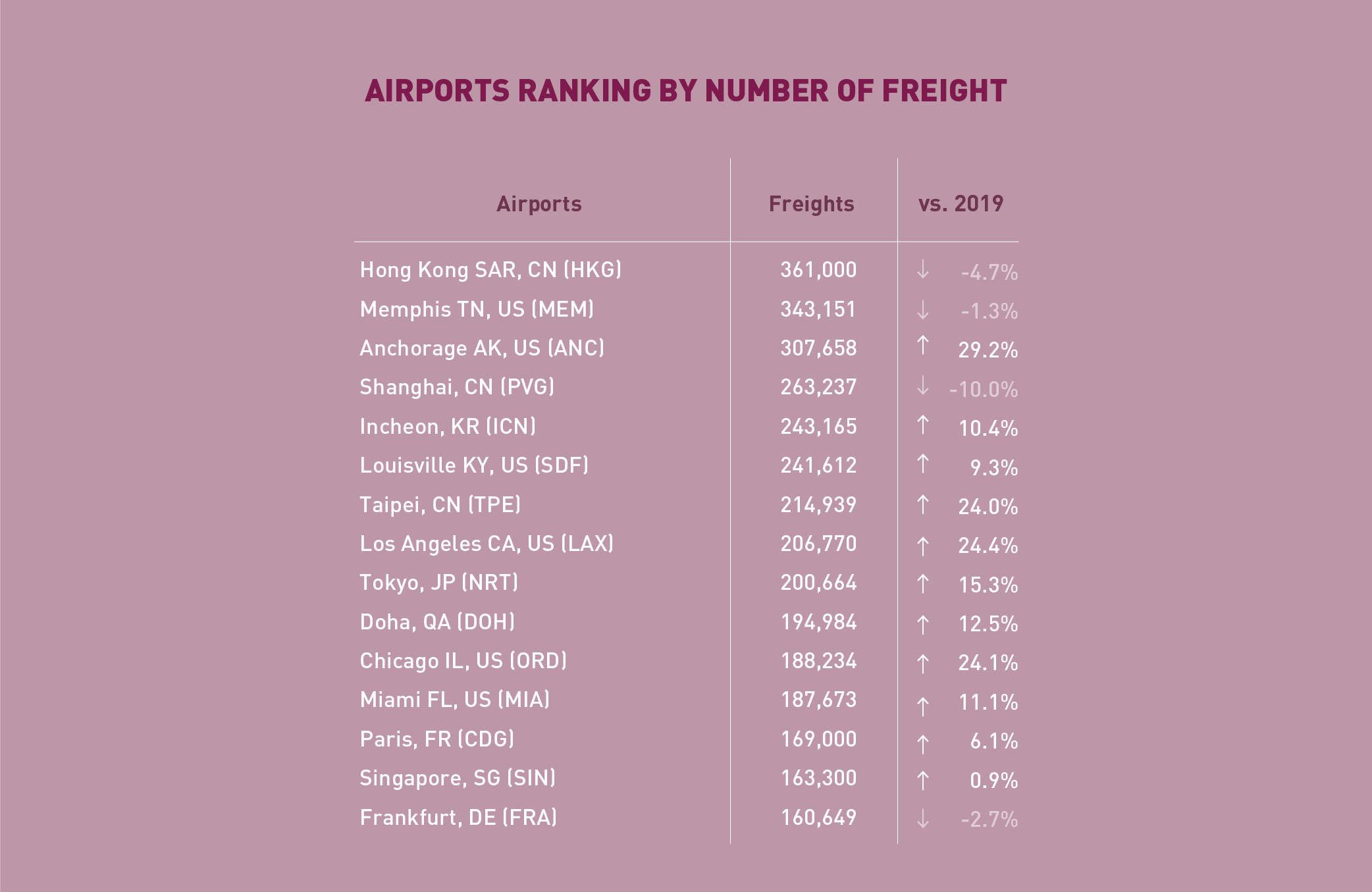 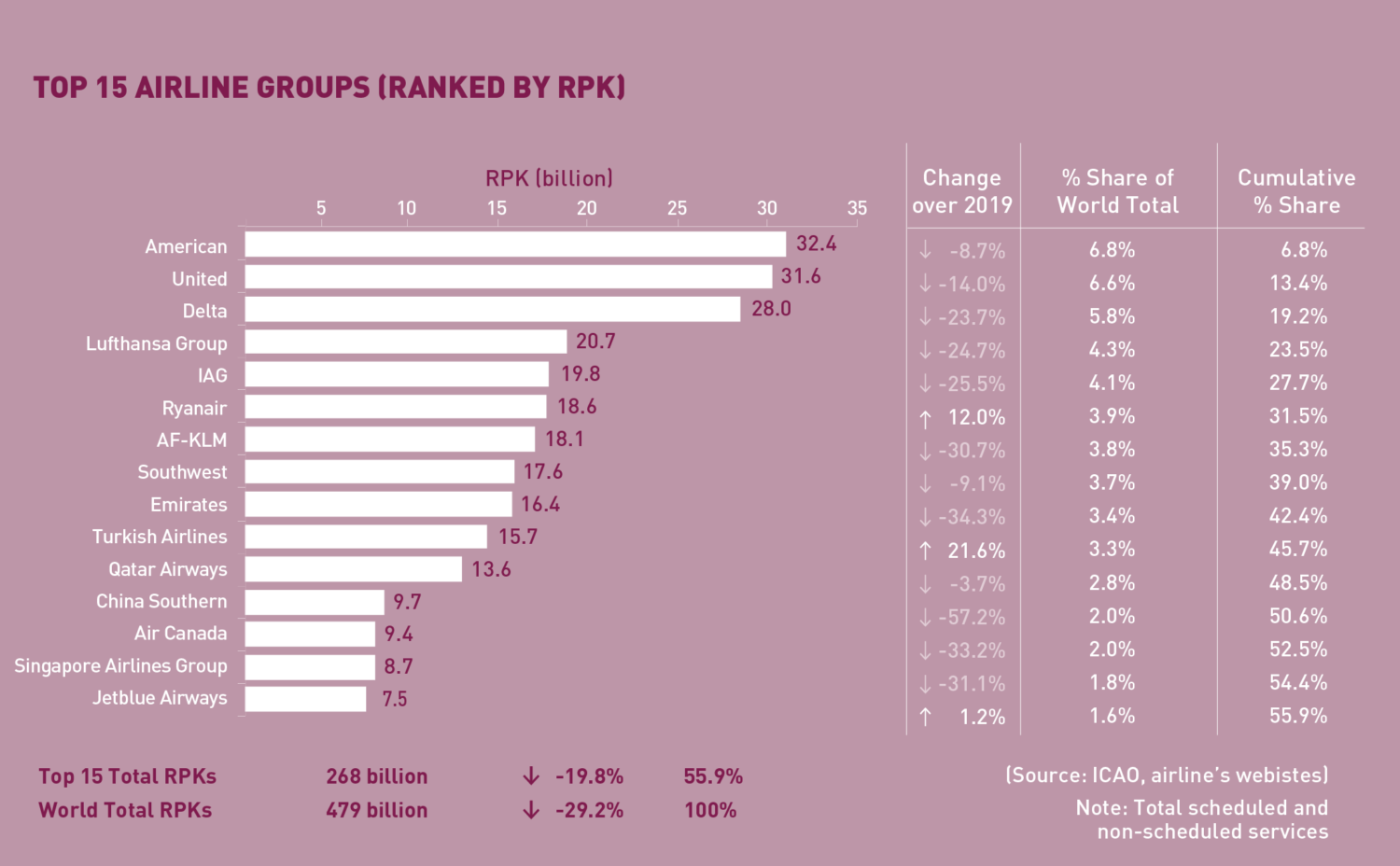 In terms of RPK, the Top 15 airline groups accounted for 55.9% of the world’s total RPK in June 2022 and declined by –19.8% compared to 2019. This decline was 9.4 percentage points smaller than the fall in the world’s average RPK. The Top 15 airlines continued to show fluctuation due to the diverse pace of recovery among regions.

The US airlines retained the Top 3 positions, with American at 1st, followed by United and Delta. Rankings of Southwest and Jetblue dropped slightly, overtaken by airlines in Europe and Asia/Pacific. Airlines in Europe continued to show improvements supported by the surge in international travel. Lufthansa, IAG, Ryanair, and AF-KLM occupied the positions from 4th to 7th. Turkish Airlines maintained 10th place.

The performance of airlines in the Middle East was relatively stable. Emirates dropped 1 position to 9th, while Qatar retained 11th.

After disappearing from the Top 15 list for two months, China Southern re-appeared in the list and ranked 12th, however, the airline recorded the largest decline among the Top 15 group at -57.2%. Singapore Airlines kept the 14th position with a decline of -31.1%. 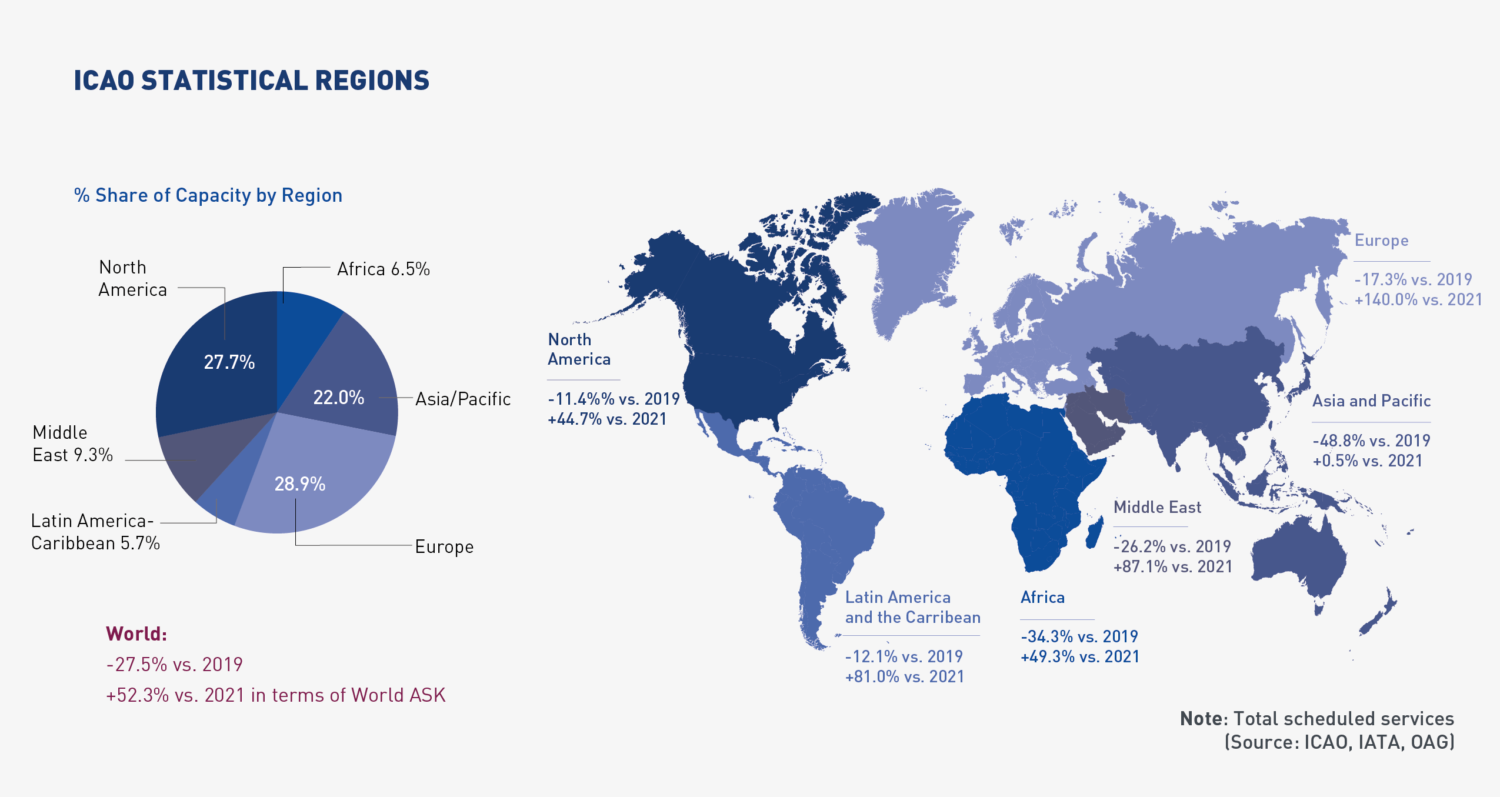 Worldwide capacity contracted by -27.5% in June 2022, compared to 2019. Capacity offered by airlines posted slight improvements over the previous month, with only Asia/Pacific and Latin America/Caribbean recording smaller declines. The other regions posted a modest month-on-month decline, except for the Middle East, which saw a decline by over 10 percentage points.