The numbers that are shared in the article below reflect the numbers in February 2022. The analysis of the economic and aviation indicators we share here reflect the continuing impact of COVID-19 on this industry.

World Results and Analyses for February 2022 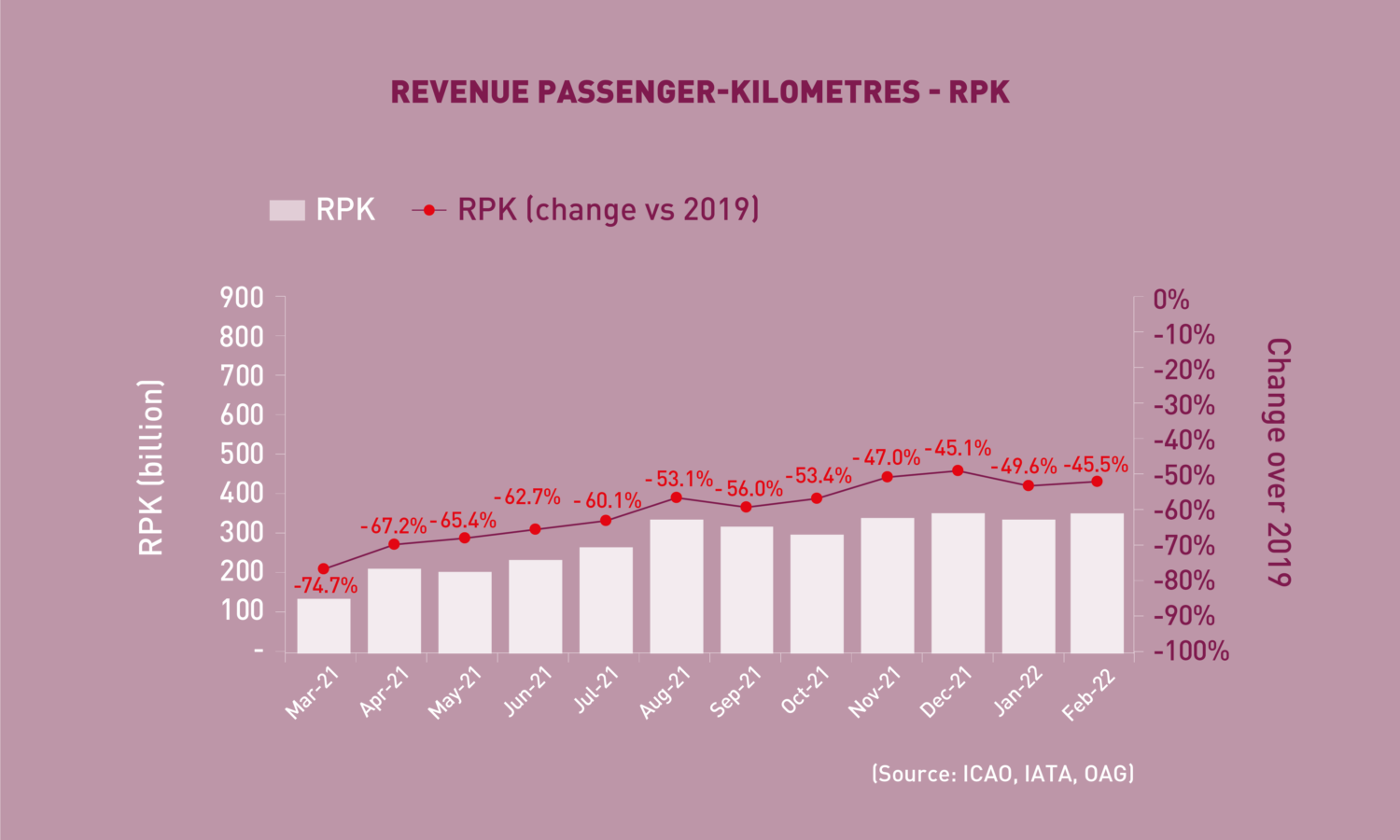 World passenger traffic fell by -45.5% in February 2022 (compared to 2019), +4.1 percentage points up from the decline in the previous month. Passenger traffic rebounded swiftly after trending sideways in January amid the proliferation of the Omicron variant. While the improvement in international air travel was broad-based, the performance of domestic travel was disparate across main markets. With signs of easing restrictions against Omicron, the positive recovery trend is likely to sustain in the following month. 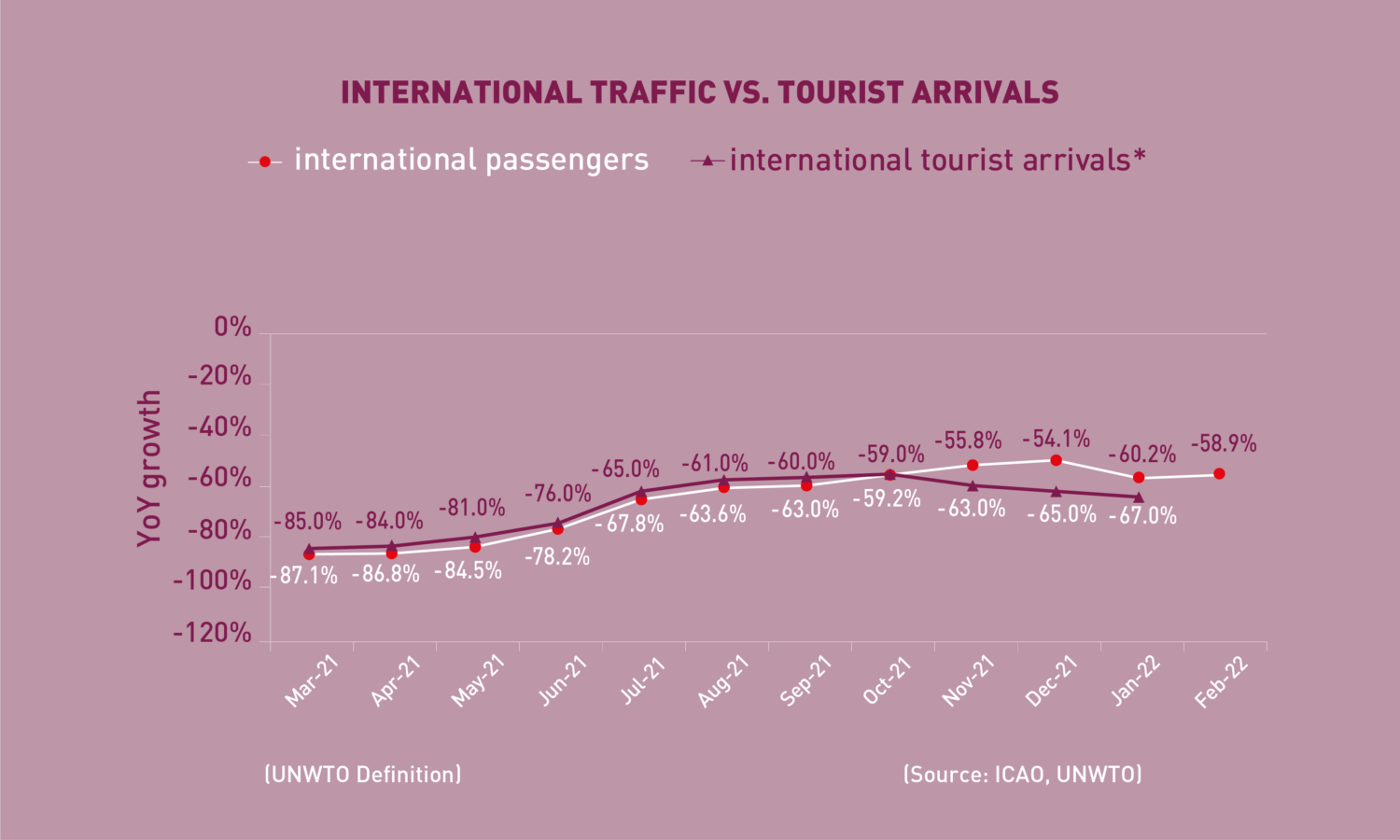 International passenger numbers fell by -58.9% in February 2022 (compared to 2019), +1.3 percentage points up from the decline in the previous month. All major regions, particularly Europe, demonstrated improvements. The recovery in international tourist arrivals is expected to follow a similar trend as international air travel. 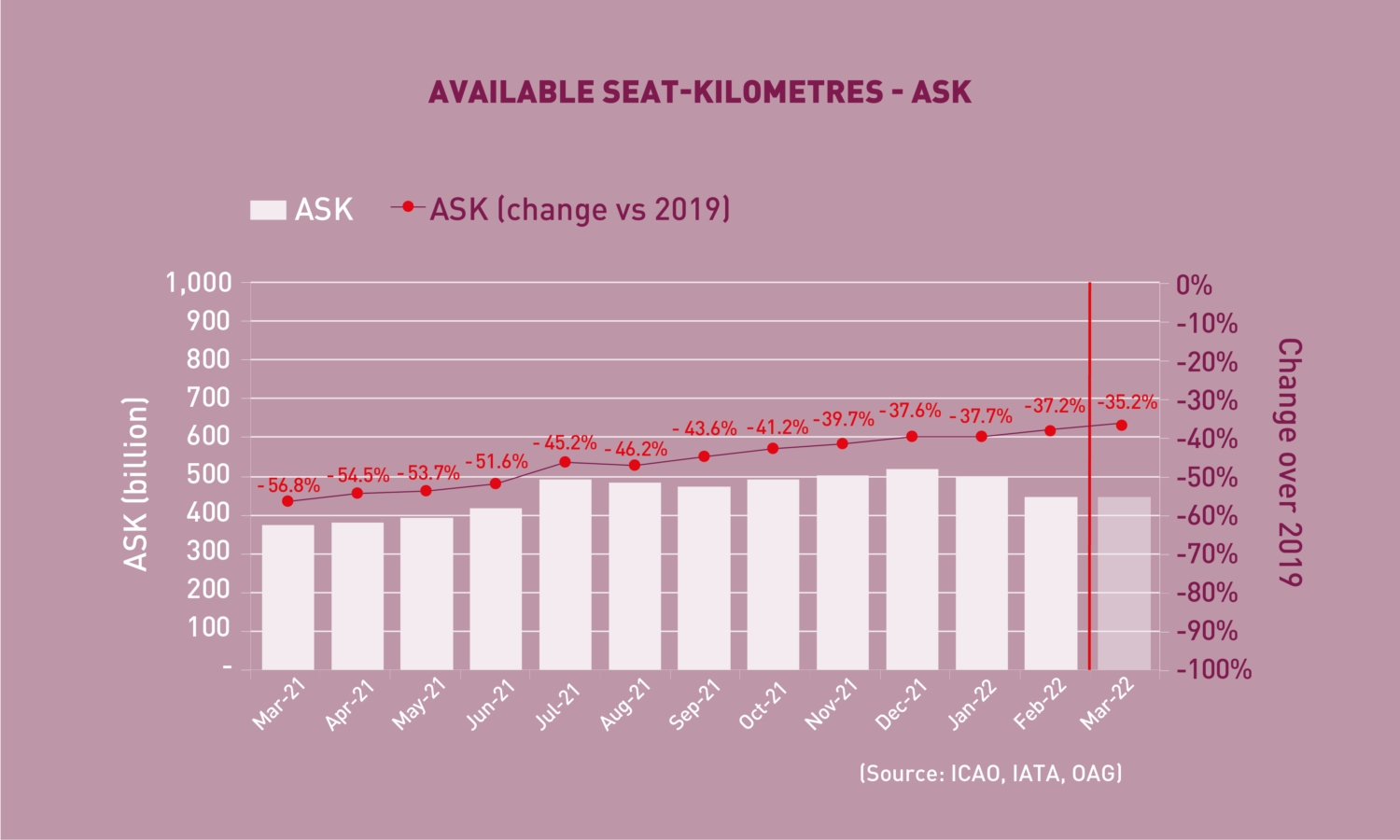 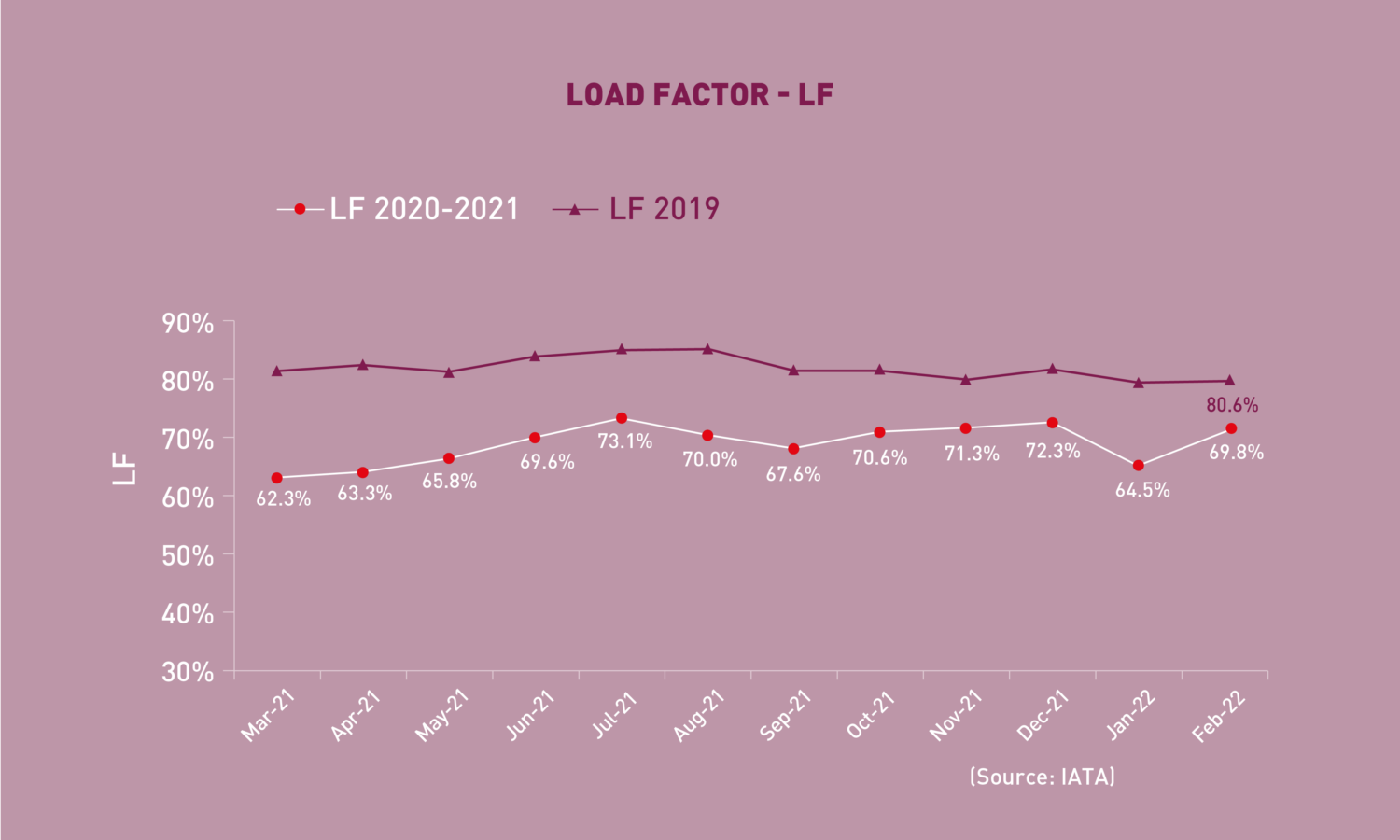 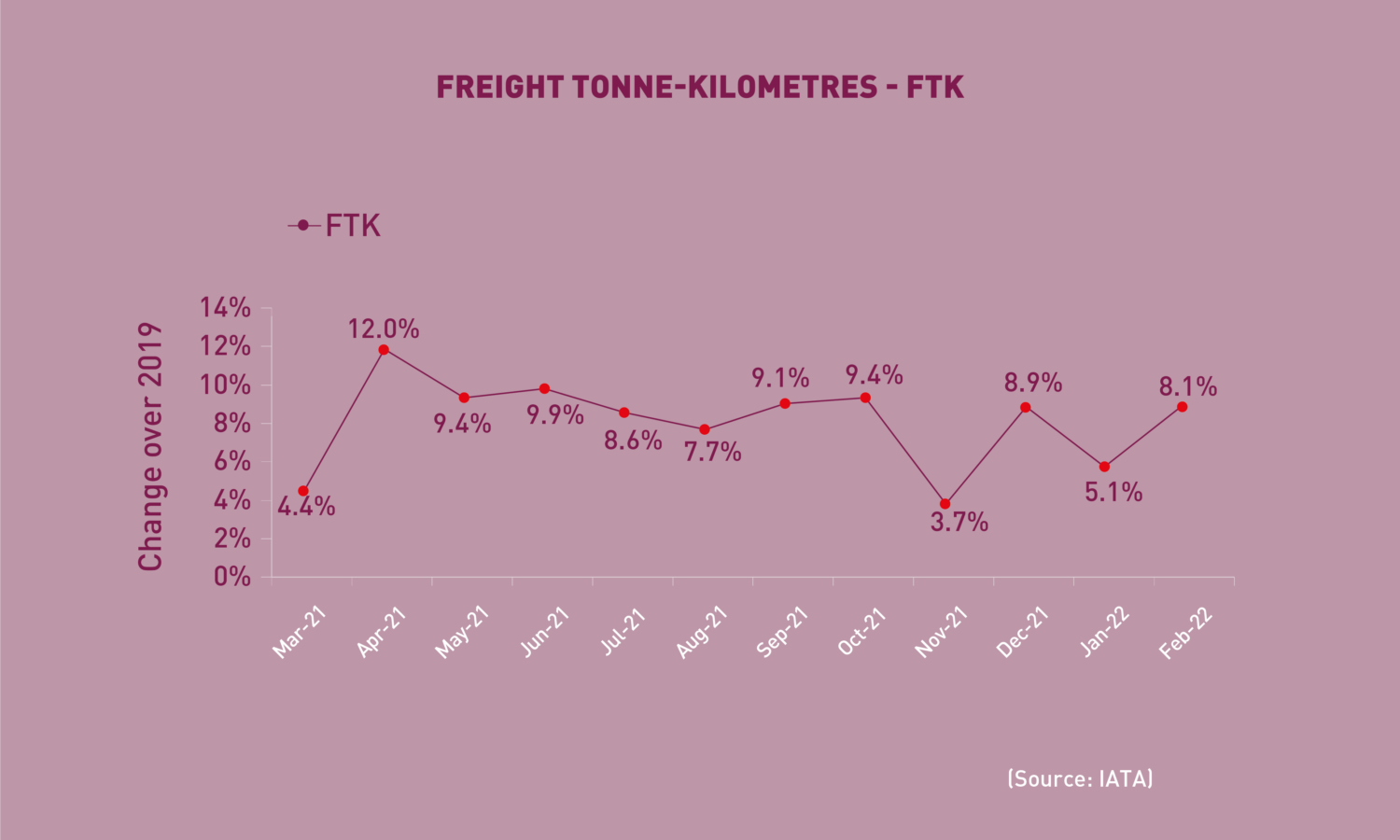 World freight traffic reported a growth of +8.1% in February 2022 (compared to 2019), +3.0 percentage points up from the growth in the previous month. Air cargo continued to grow, owing to the reduced disruptions from Omicron variant and the rebound in activity exports post Chinese New Year. Nevertheless, the current economic situation and the conflict in Ukraine points to challenges to future air cargo growth. Performance of the regions was a mix. Africa and North America were leading the growth chart with double-digit growth, while the increases for Asia/Pacific, Europe and the Middle East were moderate. Latin America/Caribbean remained the only region posting declines compared to 2019. 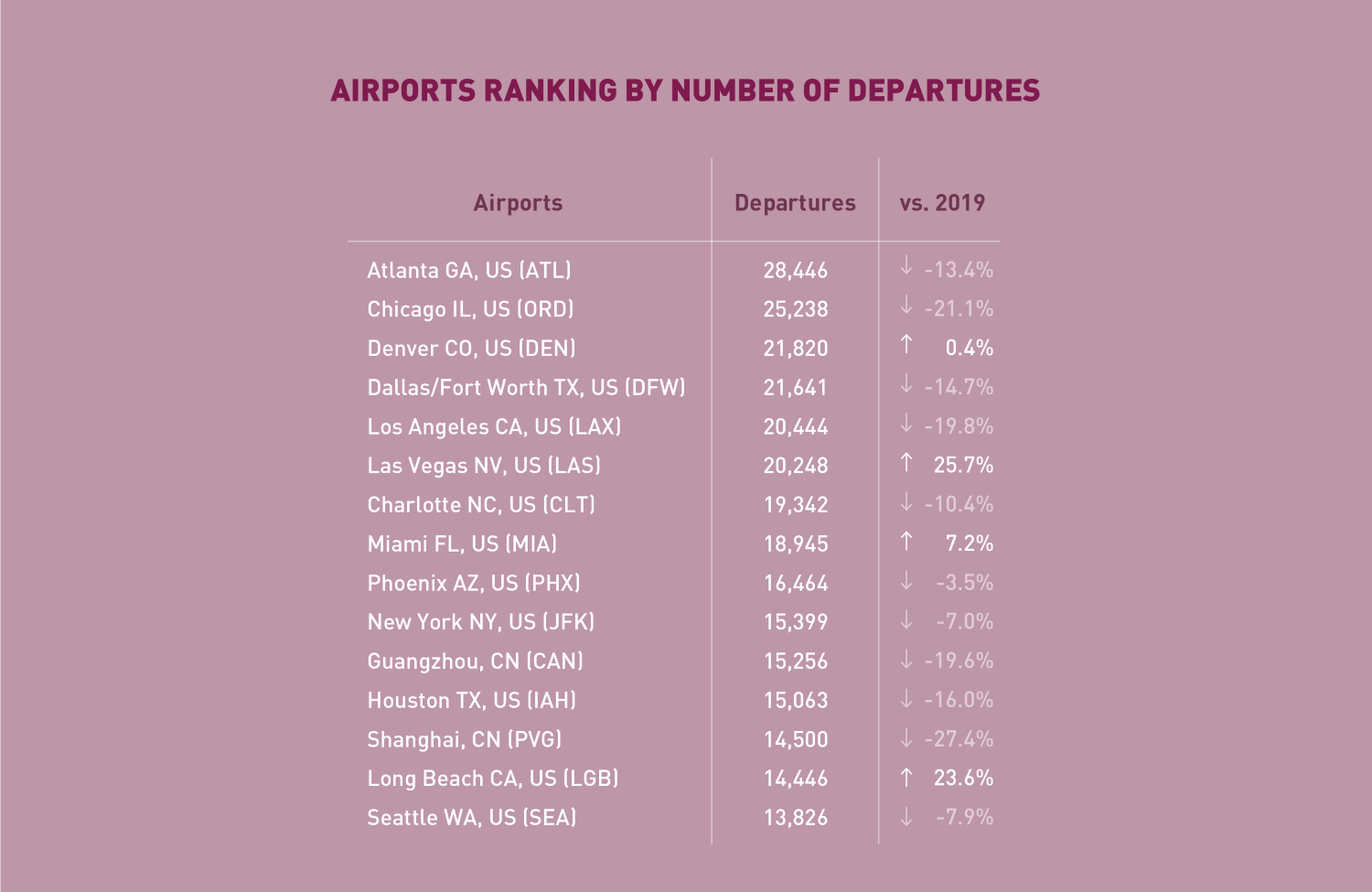 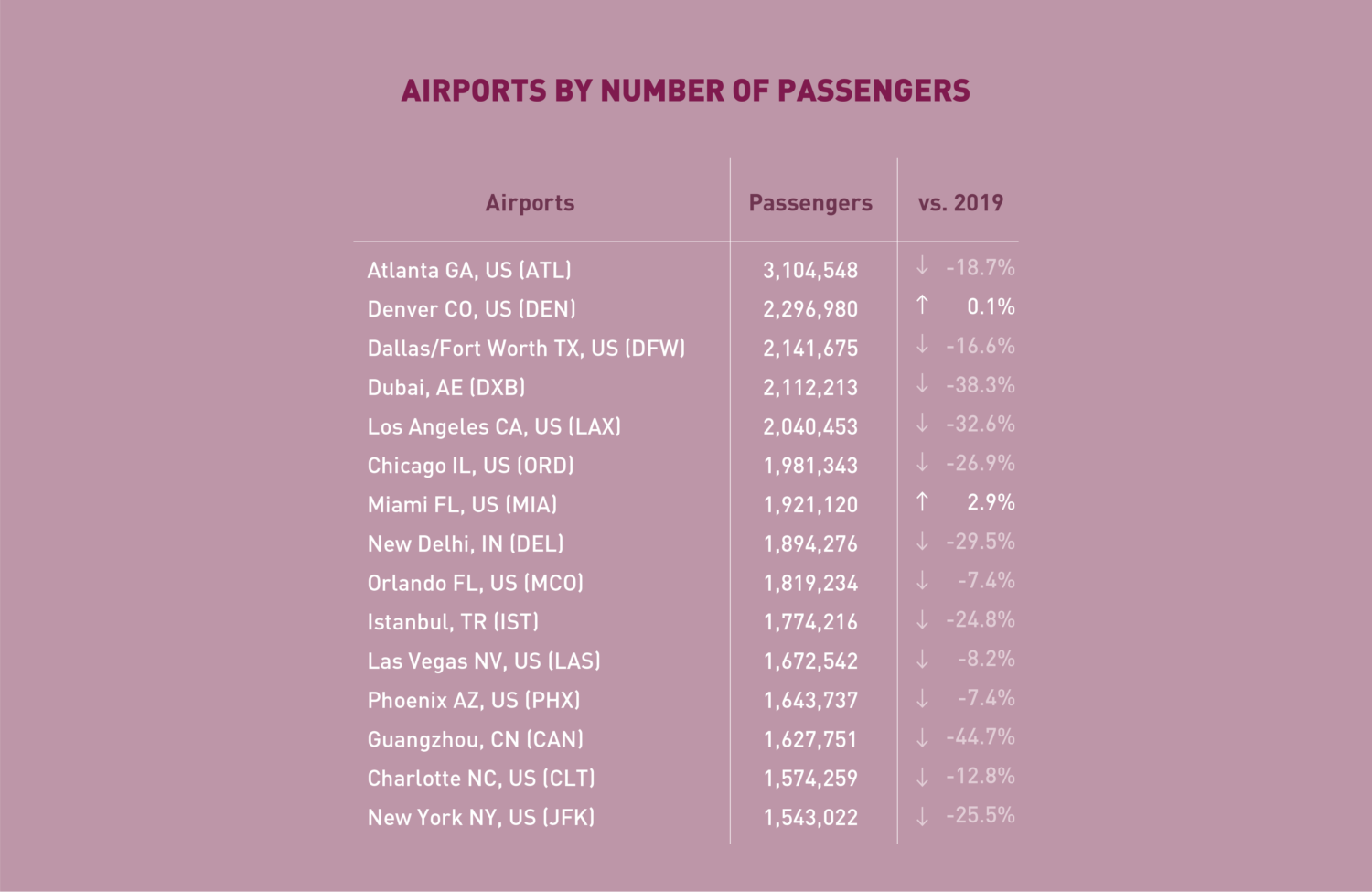 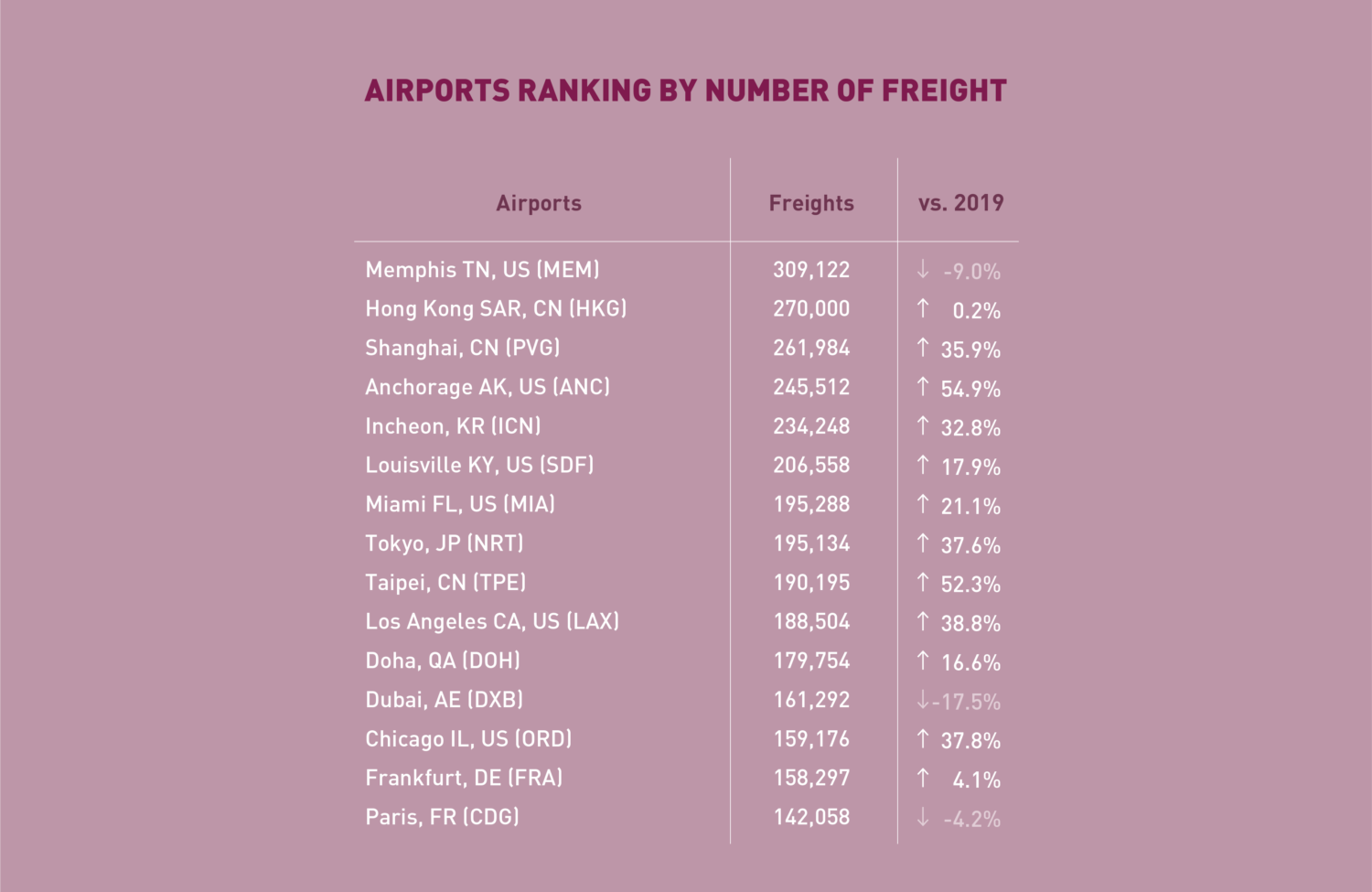 In terms of freight, the Top 15 airports reported an increase of +17.3%, compared to 2019. Majority of the Top 15 airports grew double-digitally, with Anchorage recording the strongest growth at a robust +54.9%. Despite the decline of -9.0%, Memphis overtook Hong Kong became 1st. For the six consecutive month, Dubai posted the largest fall. 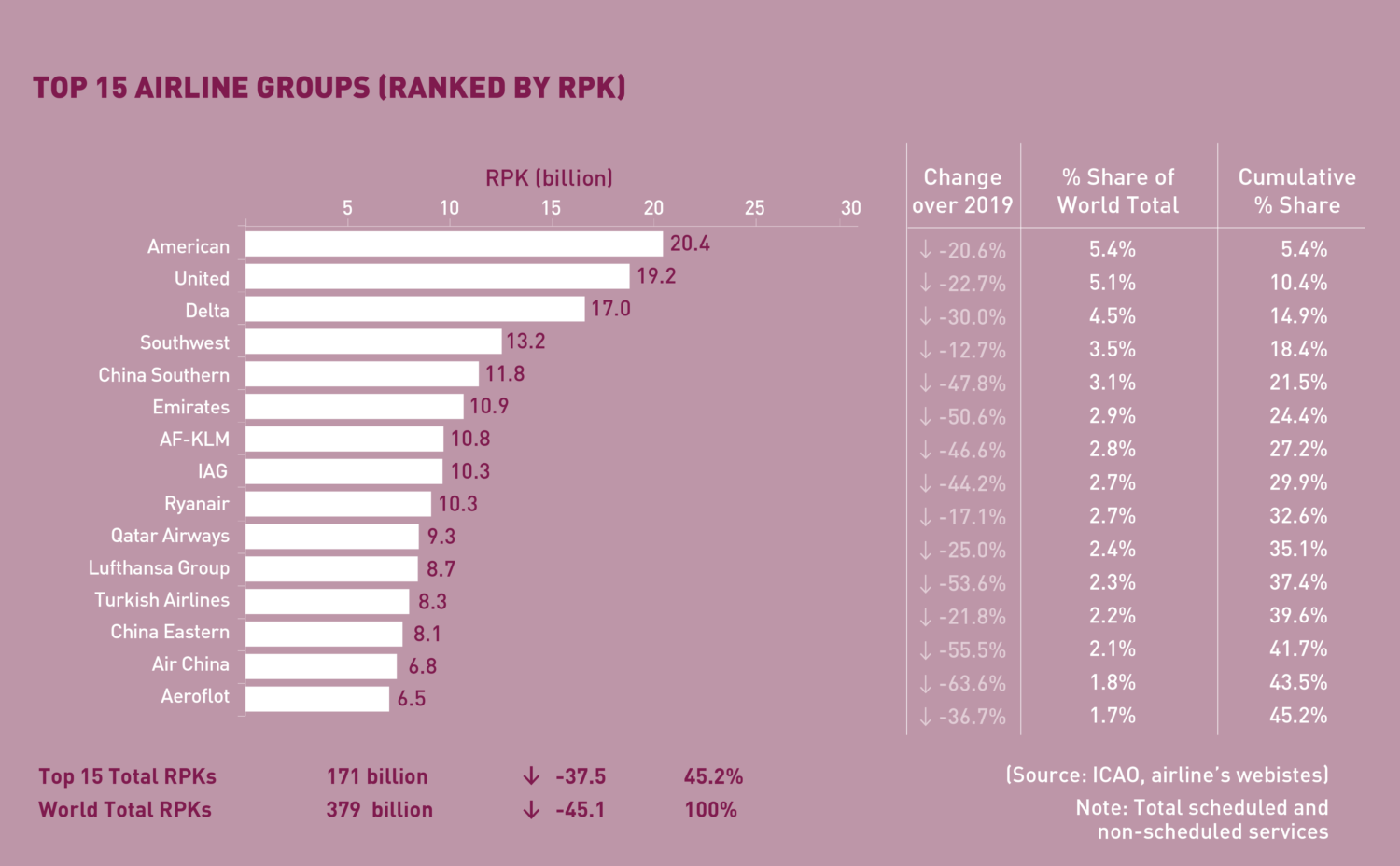 In terms of RPK, the Top 15 airline groups accounted for 45.2% of the world’s total RPK in February 2022 and declined by –37.5% compared to 2019. This decline was 7.6 percentage points smaller than the fall in world’s average RPK. February rankings fluctuated, particularly amongst the European airlines.

The U.S. airlines retained the Top 4 positions, with American at 1st, followed by United, Delta and Southwest. All of the four airlines also posted smaller declines compared to December 2021.

The Chinese domestic traffic improved slightly due to the timing of the Chinese New Year. As a result, Air China re-appeared in the Top 15 at 14th. China Southern and China Eastern improved respectively 1 and 2 positions to 5th and 13th.

Rankings of the European airlines fluctuated notably, impacted by a combination of easing travel restrictions and the conflict in Ukraine. While AF-KLM and Lufthansa dropped 2 and 3 positions, IAG climbed 5 positions.

Performance of airlines in the Middle East was consistent, with Emirates and Qatar maintaining similar positions as the previous month. 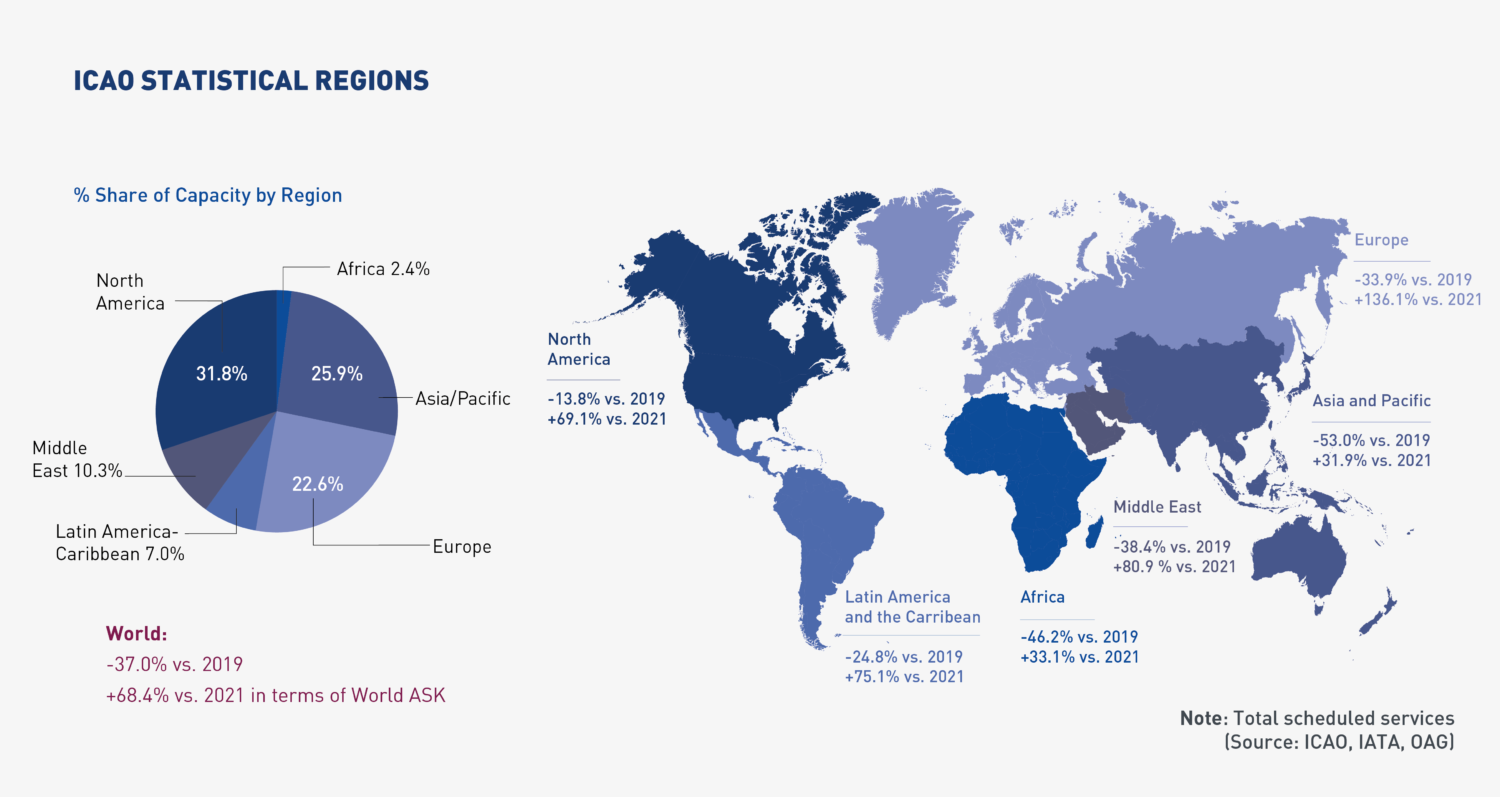 Worldwide capacity contracted by -37.0% in February 2022, compared to 2019. Following a marginal impact from the Omicron disruption in January, passenger capacity rebounded. North America demonstrated the most resilience with capacity close to the level saw pre-crisis. Asia/Pacific continued to be the slowest recovering region.