According to the latest ICAO long-term traffic forecasts that were published in September 2016, world scheduled passenger traffic, expressed in terms of Revenue Passenger Kilometres (RPK), will grow 4.6 per cent annually until 2032. By the year 2032, the world scheduled RPKs are expected to reach 12.4 trillion, more than doubling the 6.6 trillion in 2015.

Global freight traffic is expected to grow 4.4 per cent annually over the same time period as passenger forecasts, and reach 400 billion Freight Tonne-Kilometres (FTKs). The Middle East has the highest forecast of annual growth outpacing global estimate by about 2.8 percentage points. The growth rate of Asia and Pacific is close to the global estimate, at 4.7 per cent. Europe, Latin America/Caribbean, and North America will grow at a slightly slower pace than Asia and Pacific while Africa has the lowest annual growth rate of 2.1 per cent. 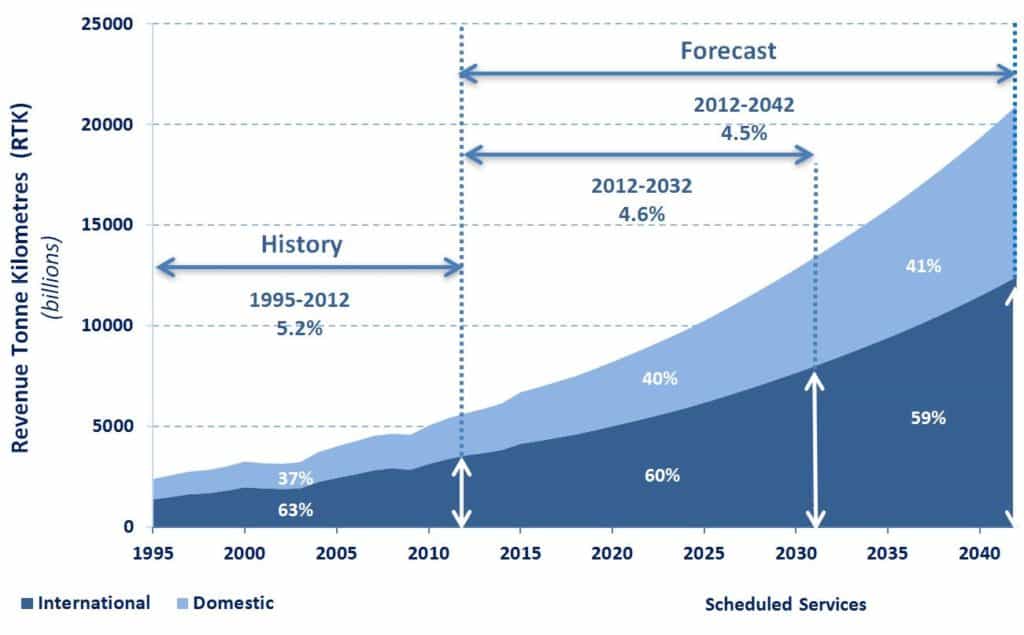 Planners know only too well that long-term forecasts are the basis for effective planning activities when considering the billon-dollar infrastructure projects that are required to support the airport and airspace capacities that growth will demand.

With the aim of providing industry planners, policy makers and regulators with the most comprehensive, up-to-date, relevant and reliable data upon which to base their analyses, decisions and actions, ICAO took steps to develop long-term traffic forecasts in September 2016, from which customized or more detailed forecasts can be produced for various purposes. The development of the forecasts included extensive input from experts from several Member States and international organizations. The latest forecasts replaced ICAO’s decade-old forecasting techniques with the most rigorous econometric models that it has ever produced.

ICAO Long-Term Traffic Forecasts provide projections up to 2042 on passenger and freight traffic by region, as well as 50 route groups. Estimated growth rates are available for 10-, 20-, and 30- year time periods. The forecasts are balanced, independent, comprehensive and objective.

ICAO will continue its work on further refinement of the methodologies to update the existing forecasts. Users of the forecasts can benefit from a sophisticated econometrics techniques and build customization to meet their specific needs.