World Results and Analyses for August 2018 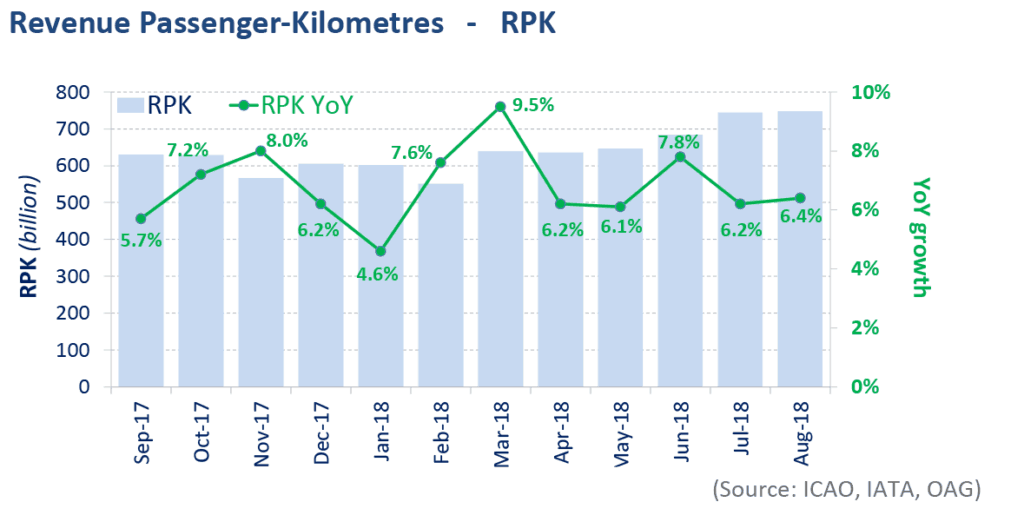 World passenger traffic grew by +6.4% YoY in August 2018, +0.2 percentage points higher than the growth in the previous month. Global traffic growth responded to the peak period of passenger demand during the summer in the northern hemisphere. Europe posted the fastest growth rate, followed by the Middle East. A slowdown was observed in other regions. Albeit with the slowdown, Asia/Pacific recorded the fastest growth rate. India’s domestic travel demand remained strong and recorded the quickest growth, followed by China and the Russian Federation. 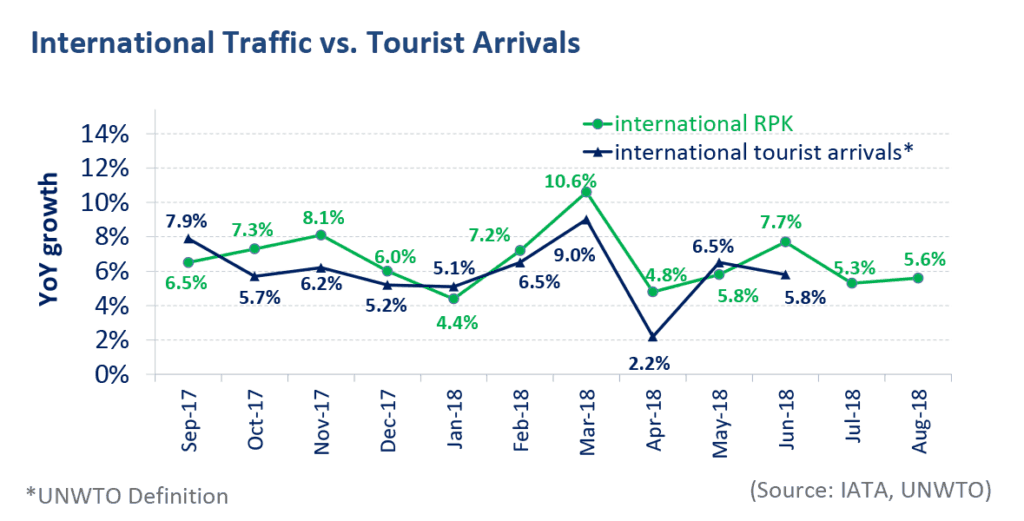 International passenger traffic grew by +5.6% YoY in August 2018, +0.3 percentage points higher than the growth in the previous month. Similar to total passenger traffic, a mix of results were observed. Latin America/Caribbean experienced the most significant acceleration, followed by Europe and the Middle East. Africa and Asia/Pacific remained stable while North America posted a downward.
The growth of international tourist arrivals* followed a similar monthly trend. 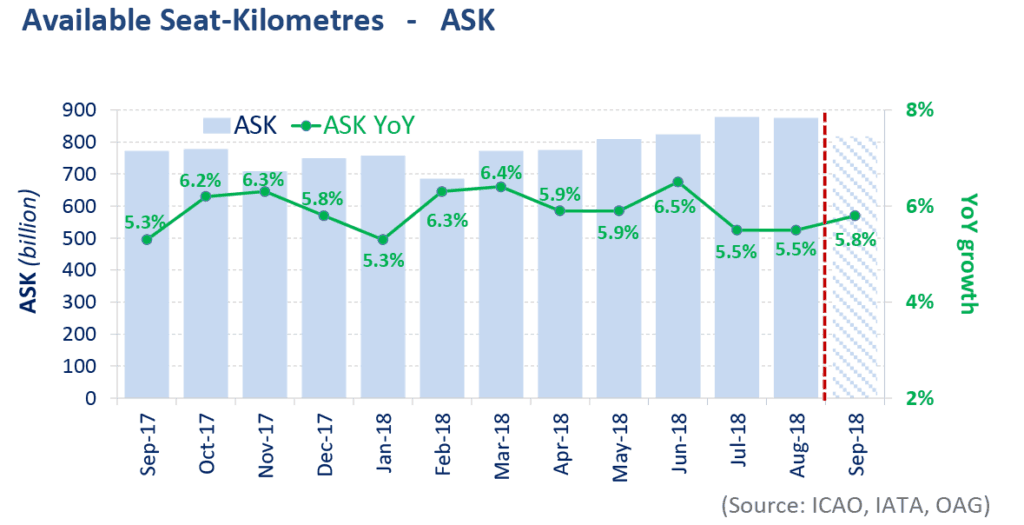 Capacity worldwide increased by +5.5% YoY in August 2018, with no change compared to the growth in the previous month. In response to the passenger traffic demand, the expansion of capacity is expected to be at +5.8% in September 2018. 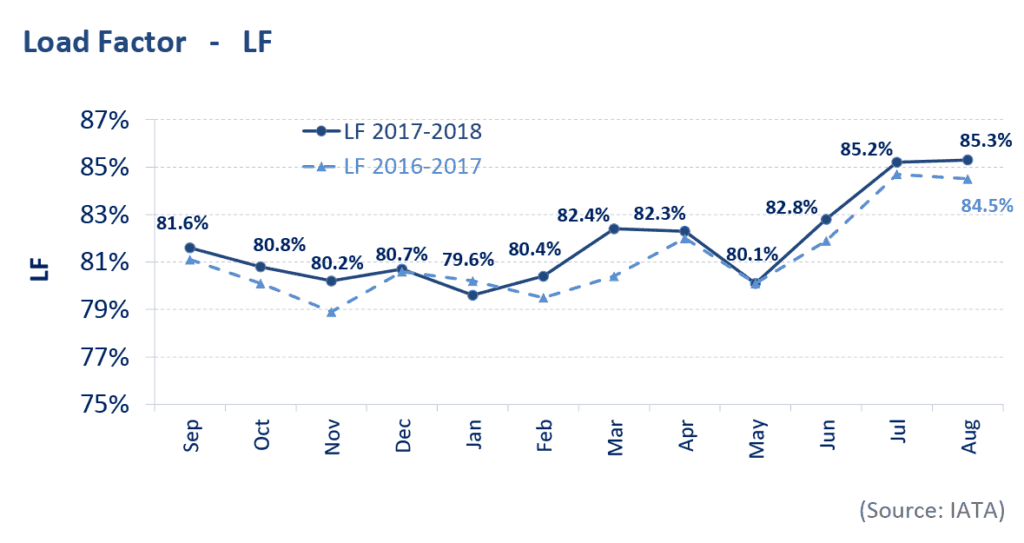 The passenger Load Factor reached 85.3% in August 2018, +0.1 percentage point higher than the LF recorded in the previous month. It has been the highest LF recorded in the last twelve months.
As traffic growth outpaced the capacity expansion, the August LF was +0.8 percentage point higher than the rate in the same period in 2017. 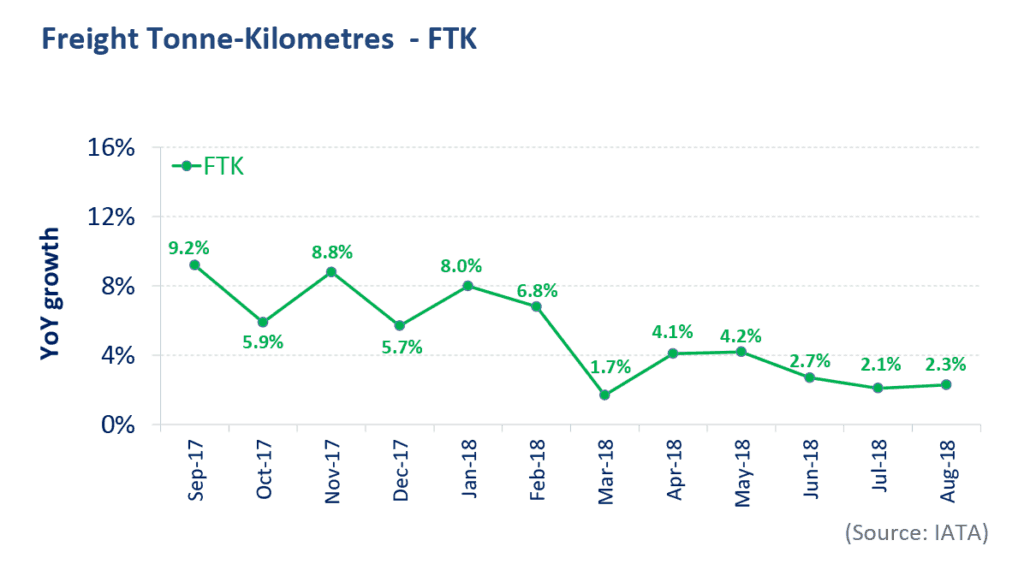 World freight traffic grew by +2.3% YoY in August 2018, +0.2 percentage points higher than the growth in the previous month. Europe recorded the fastest growth, followed by Asia/Pacific and North America. This performance was driven by improving economic conditions in the United States and the transatlantic market. The Middle East and Latin America/Caribbean recorded a slowdown. The slowdown in the Latin America/Caribbean region was due to the deceleration of the intra-regional market, as well as the decrease in the international traffic in Brazil and Mexico. For the fourth consecutive month, Africa was the only region with a negative growth, reflecting weaker demand to/from the region. 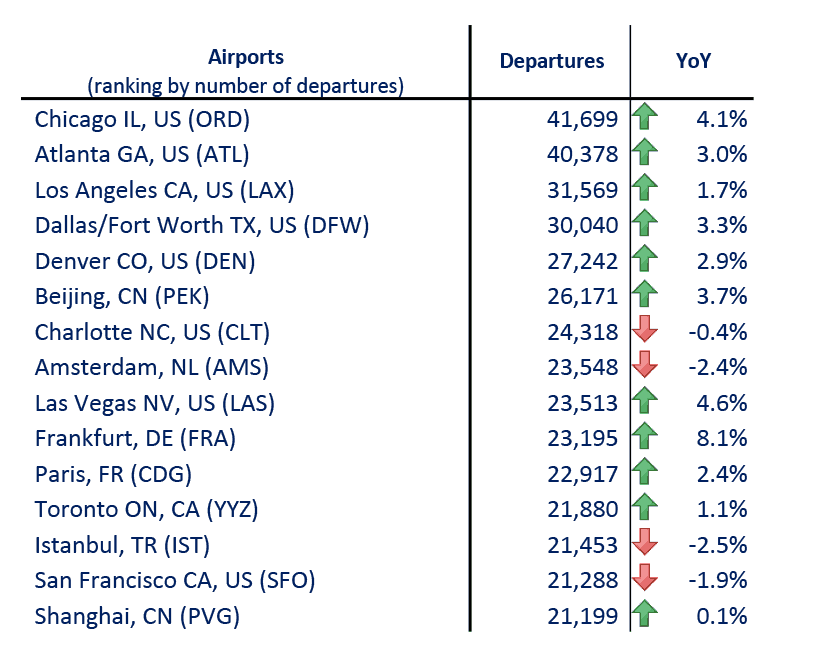 In terms of aircraft departures, the top 15 airports reported a growth of +2.0% YoY. Eleven out of the Top 15 airports posted YoY increases. The strongest growth in operations was recorded by Frankfurt at +8.1%, owing to the positive performance in the European routes. Istanbul and Amsterdam posted the largest decline of -2.5% and -2.4%, respectively. 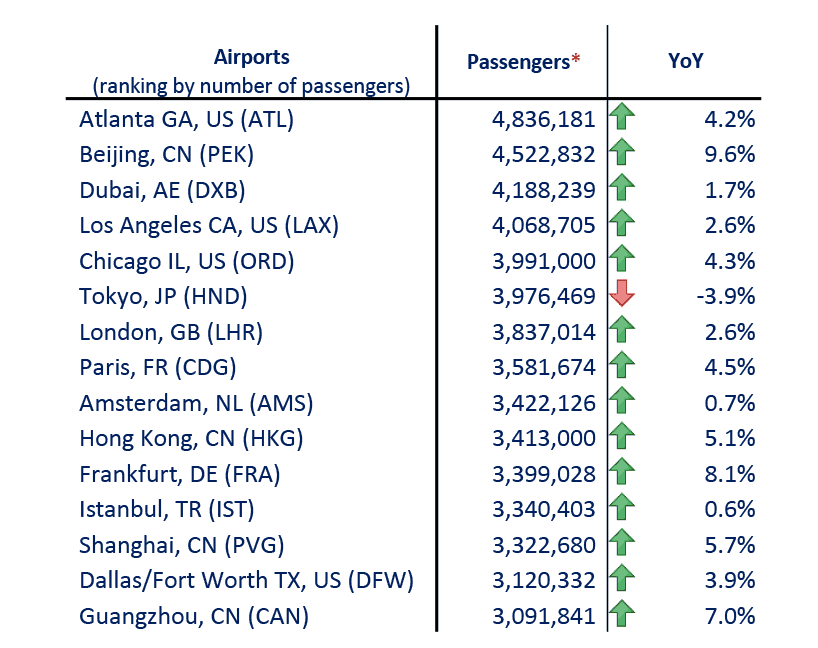 In terms of passengers, the top 15 airports reported a growth of +3.6% YoY. Fourteen out of the Top 15 airports posted YoY increases, except for Tokyo with a decline of -3.9%, due to the flight disruption caused by the typhoon Shanshan. Atlanta retained the 1st position with a growth of +4.2%. Beijing recorded the fastest growth in passenger traffic by +9.6%, followed by Frankfurt (+8.1%). 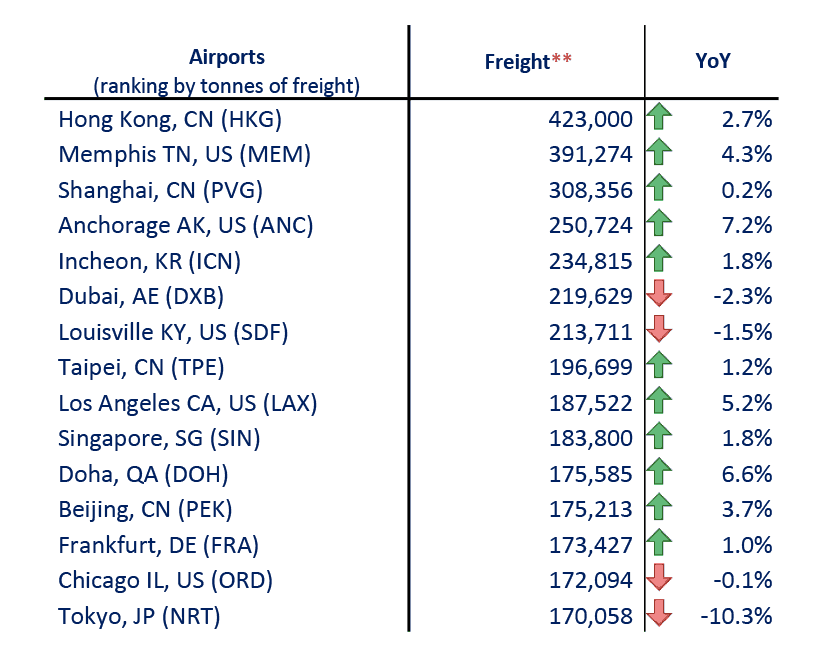 In terms of freight, the top 15 airports reported a growth of +1.6%. Eleven out of theTop 15 posted a YoY increases. The strongest growth was recorded by Anchorage (+7.2%) and Doha (+6.6%). Tokyo experienced the biggest decline of -10.3% due to weaker conditions for manufacturing exporters in Asia/Pacific, a drop in the international transit cargo and the meteorological impacts. 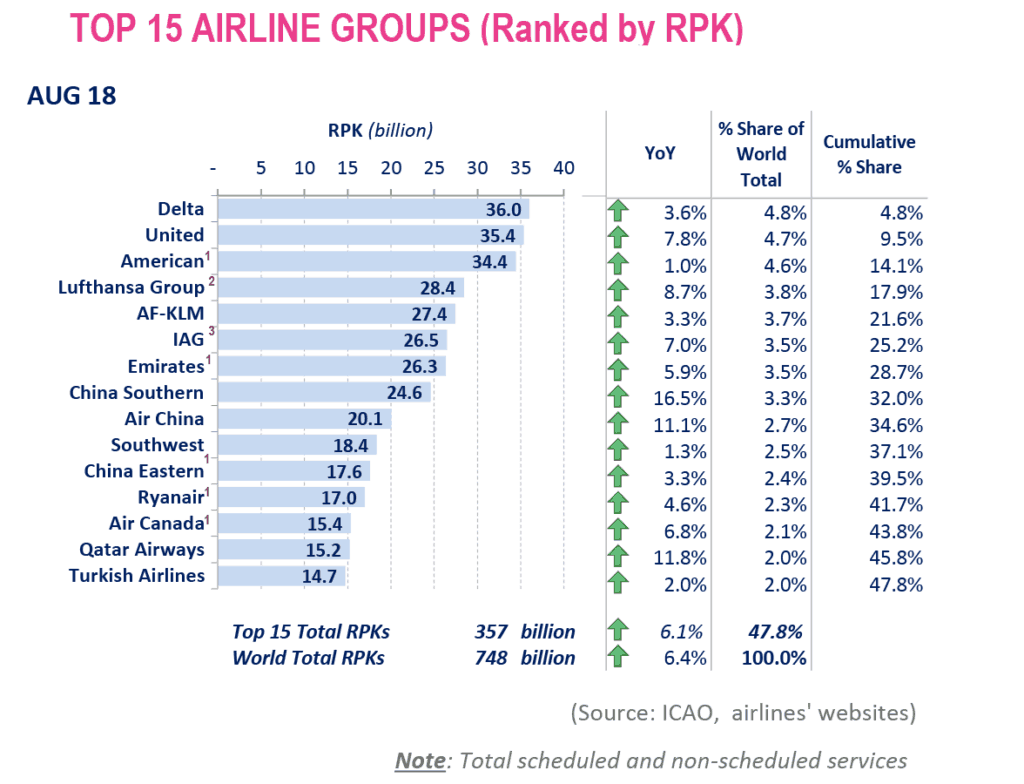 In terms of RPK, the top 15 airline groups accounted for 47.8% of world total RPK in August 2018, and grew by +6.1% YoY. This growth was -0.3 percentage point lower than the world average on scheduled services. All the Top 15 airline groups posted YoY increases.

Major airlines in Asia/Pacific continued to grow robustly, with China Southern recording the fastest growth by +16.5%, and remained ranked at 8th. Air China grew by +11.1% and improved 1 position up to 9th. China Eastern grew modestly at +3.3% and ranked at 11th, this being the same as the previous month.

Worldwide capacity expanded by +5.5% YoY in August 2018. North America and Europe posted growth, compared to the previous month. The rest of the regions experienced a deceleration in the capacity increase. Asia/Pacific, Latin America/Caribbean and the Middle East recorded a faster growth than the world average. Africa slowed slightly the pace during the month.