World Results and Analyses for January 2019

World passenger traffic grew by +6.5% YoY in January 2019, +1.2 percentage points higher than the growth in the previous month. This was the highest growth recorded since July 2018, indicating a positive start of the year. Asia Pacific, Europe, and North America denoted the highest traffic growth in respective order. The Middle East picked up slightly, however, remained as the slowest growing region. China posted the fastest growth in domestic traffic, followed by India and the Russian Federation.

International passenger traffic grew by +6.0% YoY in January 2019, +0.5 percentage point higher than the growth in the previous month. All regions accelerated in traffic growth except Europe and Latin America/Caribbean. Europe, however, remained as the strongest international market. The growth of international tourist arrivals* followed a similar monthly trend.

Capacity worldwide increased by +6.4% YoY in January 2019, +0.3 percentage point higher than the growth in the previous month (+6.1%). According to the airline schedules, the expansion of capacity is expected to be at +5.5% for February 2019.

The passenger Load Factor reached 79.6% in January 2019, -0.8 percentage point lower than the LF recorded in the previous month. As traffic growth remains at par with capacity expansion, the January LF was the same as the rate in January 2018.

World freight traffic reported a negative growth of -1.8% YoY in January 2019, -1.3 percentage points lower than the growth in the previous month. After experiencing a third consecutive negative growth, freight traffic reached its slowest pace in twelve months. Freight traffic continues to be impacted by the apprehensions surrounding Brexit and the on-going US-China trade tensions. All regions, except for Africa, North America and Latin America/Caribbean posted a decline in growth, and the other three regions posted negative growth. The weakest performance was reported by the Middle East, followed by Asia/Pacific. North America remained as the fastest growing region, followed by Africa, albeit with moderate growth. 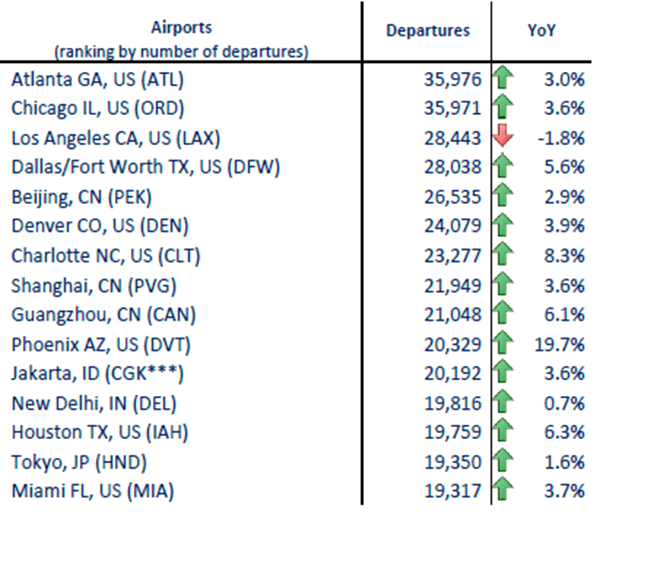 In terms of aircraft departures, the top 15 airports reported growth of +4.3% YoY. Fourteen out of the top 15 airports posted YoY increases. Atlanta ascended by 1 position to 1st and grew at +3.0%. The strongest growth in operations was recorded by Phoenix at +19.7%, followed by Charlotte at +8.3%. 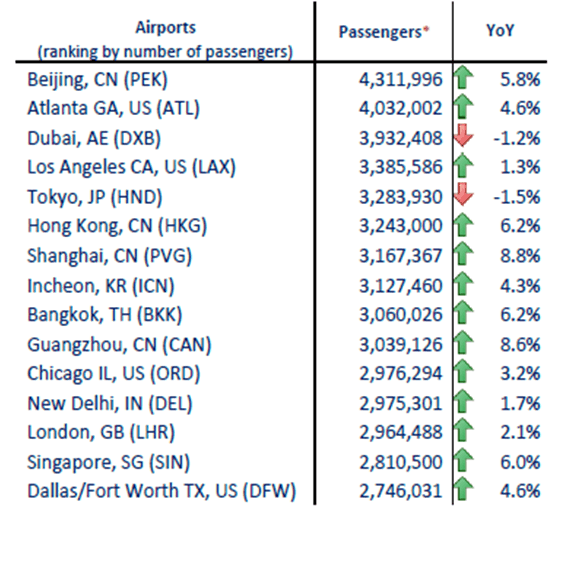 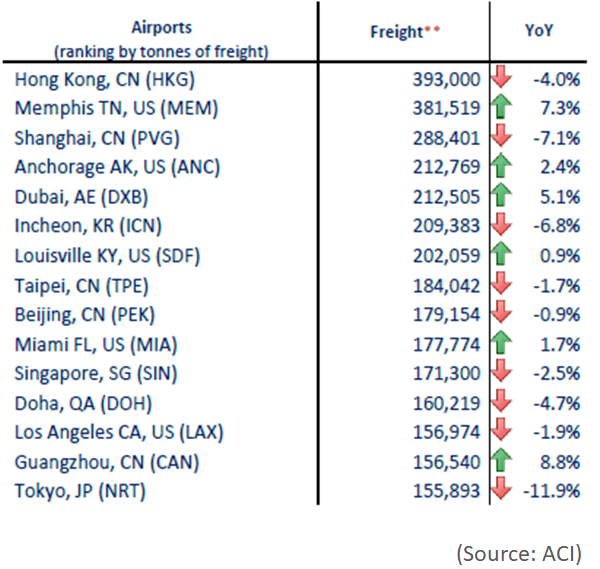 In terms of freight, the top 15 airports reported a decline of -1.1% YoY. Nine out of the top 15 airports posted YoY decreases. The most significant decline was posted by Tokyo (-11.9%), followed by Shanghai (-7.1%). Hong Kong topped the list albeit, with a decline of (-4.0%). Guangzhou became the fastest growing airport with a +8.8% YoY increase.

In terms of RPK, the Top 15 airline groups accounted for 46.2% of world total RPK in January 2019 and grew by +6.0% YoY. This growth was -0.5 percentage point lower than the world average on scheduled services. All of the top 15 airline groups posted YoY increases.

Worldwide capacity expanded by +6.4% YoY in January 2019. All regions posted acceleration in capacity expansion except Europe and the Middle East with the latter posting the most significant deceleration.
Europe continued to be the fastest growing region, followed by Asia/Pacific and Latin America/Caribbean. Africa remained as the slowest region in terms of capacity expansion.