World Results and Analyses for July 2019

World passenger traffic grew by +3.6% YoY in July 2019, -1.4 percentage points lower than the growth in the previous month. Growth momentum again softened after a recent steady recovery, and reached its second slowest level during the year. All regions, except for Asia/Pacific, eased the growth rates. The most significant slowdown was observed in Africa and the Middle East, and the latter became the weakest performing region. China regained the fastest growing domestic market, followed by India and the Russian Federation.

International passenger traffic grew by +2.7% YoY in July 2019, -2.7 percentage points lower than the growth in the previous month. All regions experienced deceleration in traffic growth, with the most notable slowdown in Africa and the Middle East. North America continued to be the slowest growing region. The growth of international tourist arrivals* remained relatively stable.

Capacity worldwide increased by +3.2% YoY in July 2019, -0.1 percentage point lower than the growth in the previous month (+3.3%). According to the airline schedules, capacity expansion is expected to up slightly to +3.4% in August 2019.

The passenger load factor reached 85.7% in July 2019, +1.3 percentage points higher than the LF recorded in the previous month. As traffic growth outpaced the capacity expansion, the July LF was +0.5 percentage point higher compared to the rate in the same period of 2018.

World freight traffic reported a decline of -3.2% YoY in July 2019, +1.6 percentage points higher than the growth in the previous month. Despite the improvement, freight traffic growth remained negative reflecting the stagnant world trade. Weakness in freight growth has been broad-based, with all regions posting YoY decline, except for Africa and Latin America/Caribbean. Africa demonstrated outstanding performance and recorded robust double-digit growth. For the third consecutive month, the Middle East experienced the most sluggish growth, followed by Asia/Pacific. The two other major freight regions, Europe and North America also showed subdued performance. 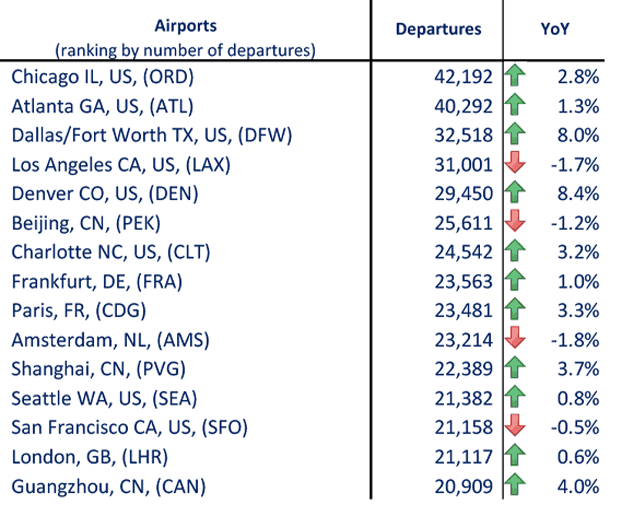 In terms of aircraft departures, the top 15 airports reported a growth of +2.2% YoY. Eleven out of the Top 15 airports posted YoY increases.  Chicago ranked first with a modest growth of +2.8%. The strongest growth in operations was recorded by Denver at +8.4%, followed by Dallas/Fort Worth at 8.0%. 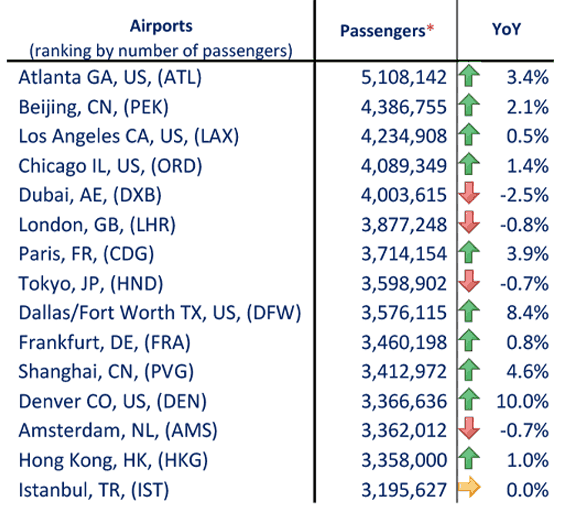 In terms of passengers, the top 15 airports reported a growth of +1.9% YoY. Ten out of the Top 15 airports posted YoY increases. Atlanta remained 1st with a growth of +3.4%. Denver recorded a sharp increase at +10.0%, driven by solid economy with support from the business expansion of Amazon. Dubai posted a decline of -2.5%, in line with the performance of major airline in the region. 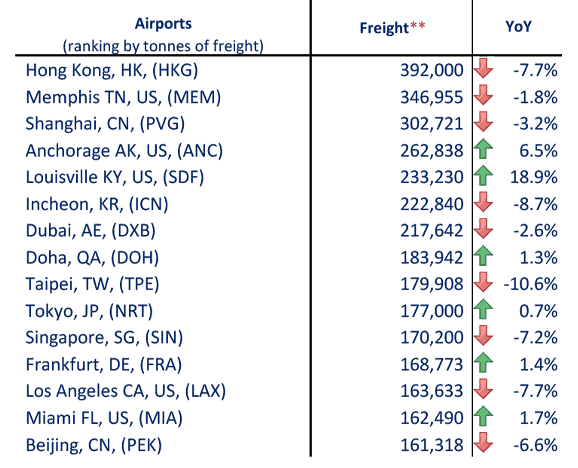 In terms of freight, the top 15 airports reported a decline of -2.2% YoY. More than half of the Top 15 airports posted negative growth. Significant drops were observed in major hubs in Asia/Pacific with Taipei and Incheon contracting -10.6% and -8.7%, respectively. Louisville continued to grow robustly at +18.9%, indicating the strengthening of its hub position of UPS. 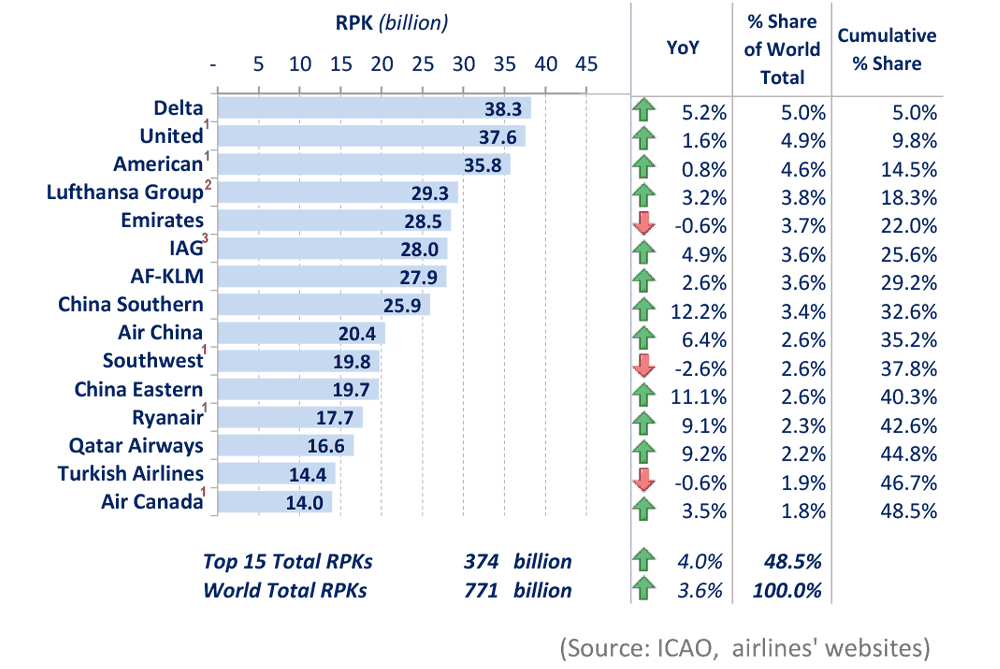 Delta ranked over United becoming 1st with solid growth of +5.2%. Followed were United and American, growing modestly at +1.6% and +0.8%, respectively. Southwest continued to post a decline and was 1 position down to 10th. For the first time this year, Air Canada made its way to the Top 15 airline groups and ranked 15th with a growth of +3.5%.

Despite a negative growth of -0.6%, Emirates was up two positions to 5th. Qatar Airways continued to grow strongly at +9.2% and remained at 13th.

Lufthansa retained its position of 4th and rose +3.2%. Both IAG and AF-KLM dropped 1 position to 6th and 7th, and grew moderately at +4.9% and +2.6%, respectively. Ryanair continued to show strong growth at +9.1% while stayed at 12th. Turkish Airlines remained at 14th, albeit contracted by -0.6%.

For the second consecutive month, both China Southern and China Eastern recorded double-digit growth and became the fastest-growing top15 airlines at the position of 8th and 11th. With a solid increase of +6.4%, Air China ranked 1 position up to 9th.

Routes Reconnected: The importance of ICAO’s pandemic role and responses

How can the aviation industry make better projections and benchmark performance?