The numbers that are shared in the article below reflect the situation as it was in February 2020. In the coming months the analysis of the economic and aviation indicators we share will reflect the continuing impact of COVID-19 on this industry.

World Results and Analyses for February 2020 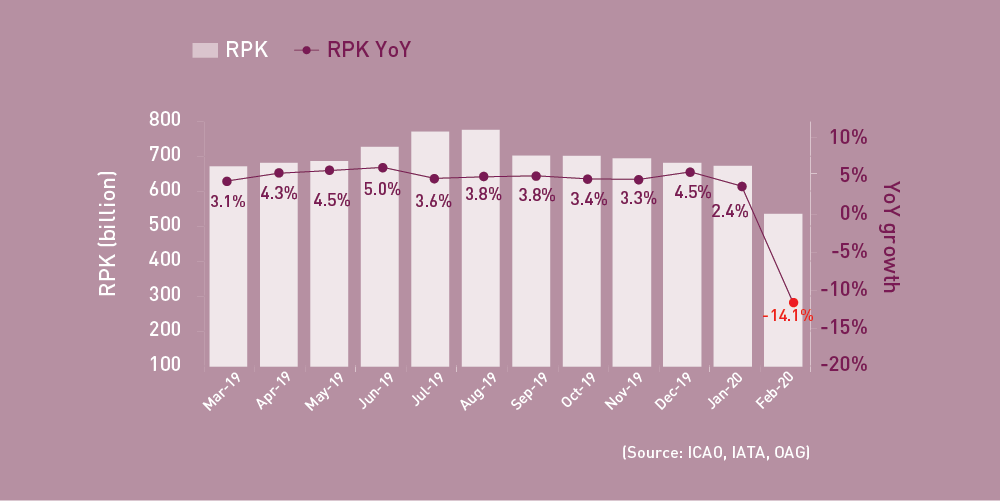 World passenger traffic grew by -14.1% YoY in February 2020, -16.5 percentage points lower than the growth in the previous month. This was the first shock from COVID-19 impact, primarily attributed to the drastic traffic drop in Asia/Pacific, specifically in China and its neighbouring countries. Over 80% of the domestic demand in China evaporated, and international traffic of the region also plummeted. With the outbreak intensifying and more countries imposing travel restrictions, the outlook for air traffic in the following month will further deteriorate. 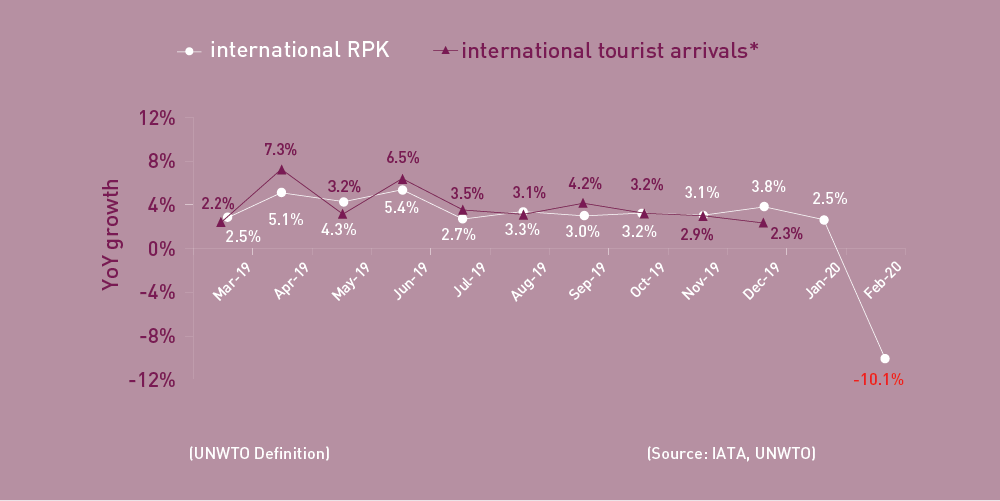 International passenger traffic grew by -10.1% YoY in February 2020, -12.6 percentage points lower than the growth in the previous month. All regions, except for Europe and the Middle East, recorded contraction in international traffic with a slump in Asia/Pacific. Tourism is as well being hit hard by COVID-19, and the trend of international tourist arrivals* is anticipated to follow a similar trend. 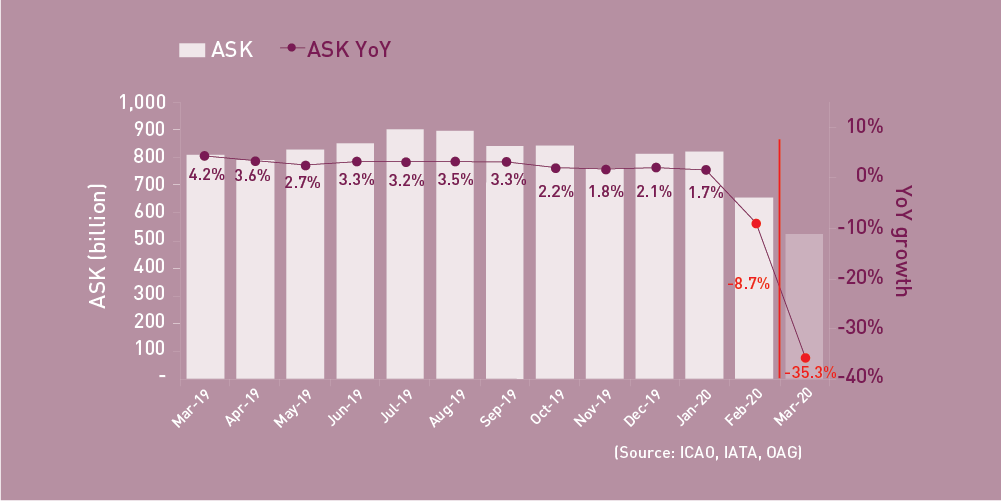 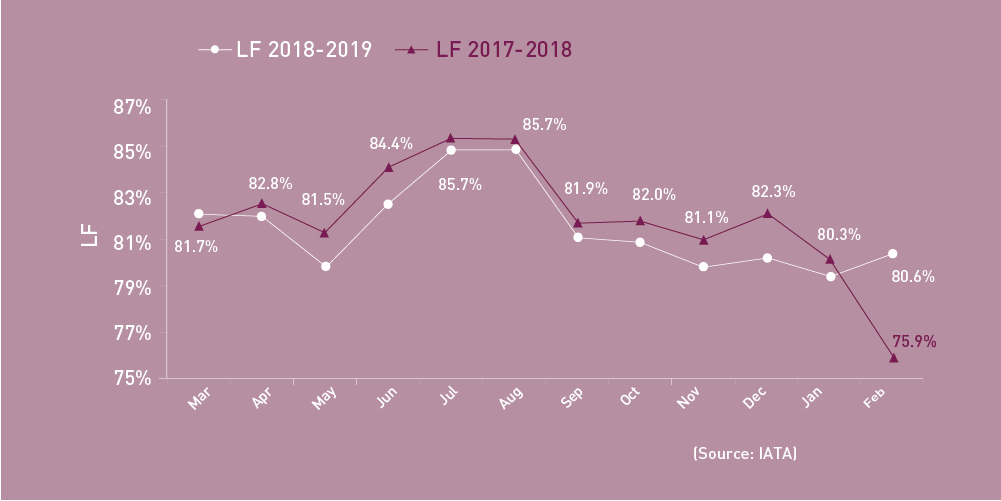 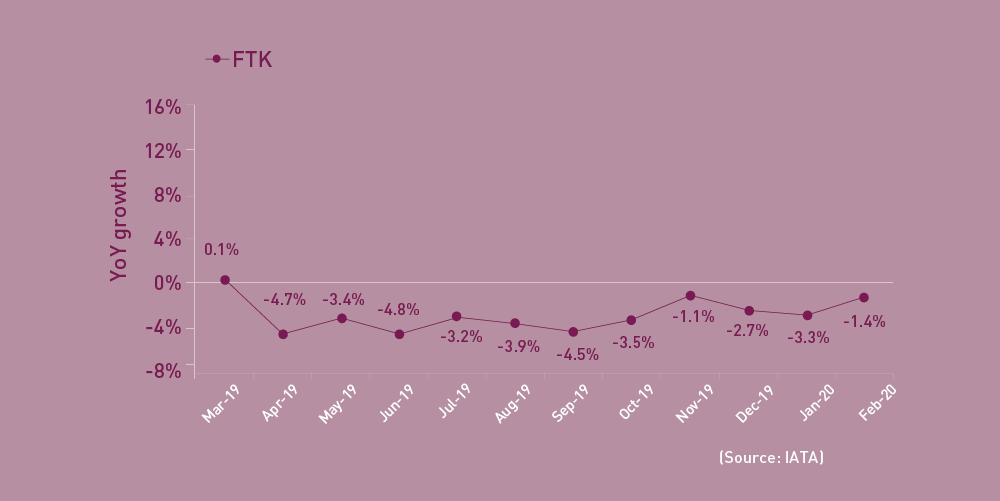 World freight traffic reported a decline of -1.4% YoY in February 2020, +1.9 percentage points higher than the fall in the previous month. The seemingly modest decline was owing to the comparison with the sluggish performance in the same period of last year. Airfreight demand has been, in fact, impacted heavily by factory shutdowns and supply chain disruptions led by the COVID-19 outbreak. Nevertheless, a decrease in air freight demand is expected to be less severe than in passenger traffic, mainly due to the increasing need for transporting medical supplies and other essential goods. The three regions accounting for over 80% of the world freight traffic, Asia/Pacific, Europe and North America, all reported declines. 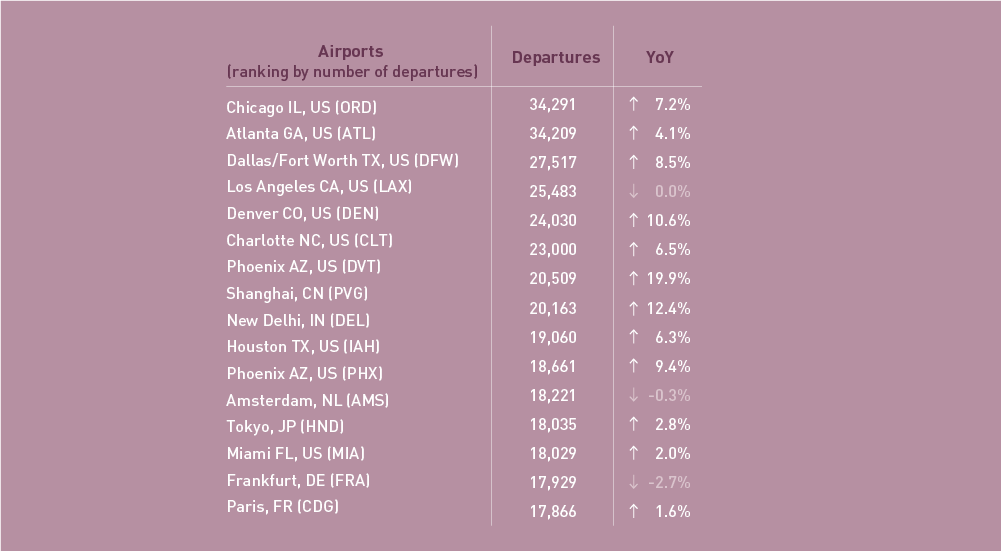 In terms of aircraft departures, the Top 15 airports reported a growth of +5.8% YoY. Due to the COVID-19 impact, major Chinese airports, i.e. Beijing, Shanghai and Guangzhou disappeared from the Top 15 ranking. Chicago ranked 1st with solid growth of +7.2%. Pheonix reported the most significant growth at +19.9% followed by New Delhi at +12.4%. 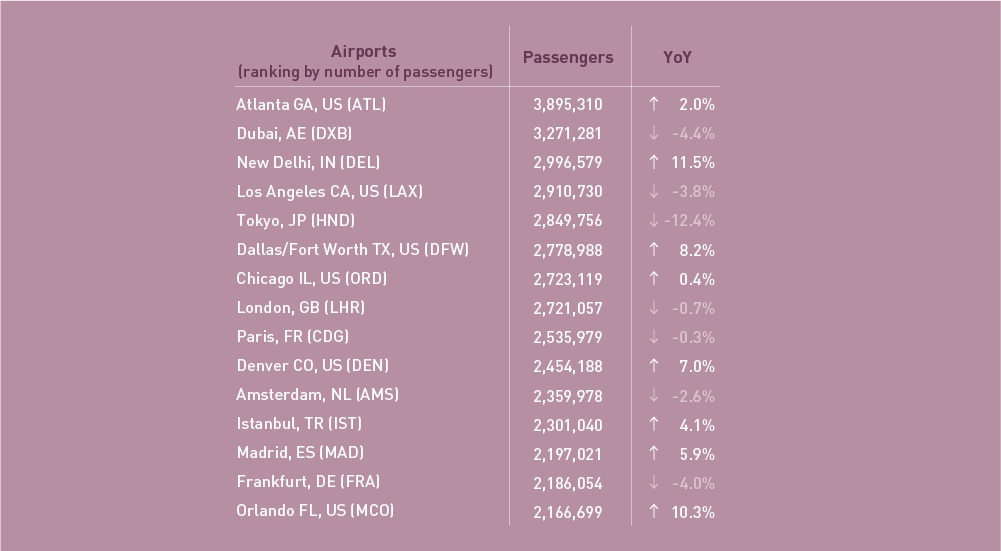 In terms of passengers, the Top 15 airports reported a growth of +0.8% YoY. Three Chinese airports, Beijing, Shanghai and Guangzhou saw drastic decline in passenger numbers and did not rank within Top 15. Atlanta remained at 1st with a modest growth of +2.0%. New Delhi ranked 3rd with the highest growth of +11.5%. Declines were observed in several major hubs with the sharpest fall in Tokyo at -12.4%. 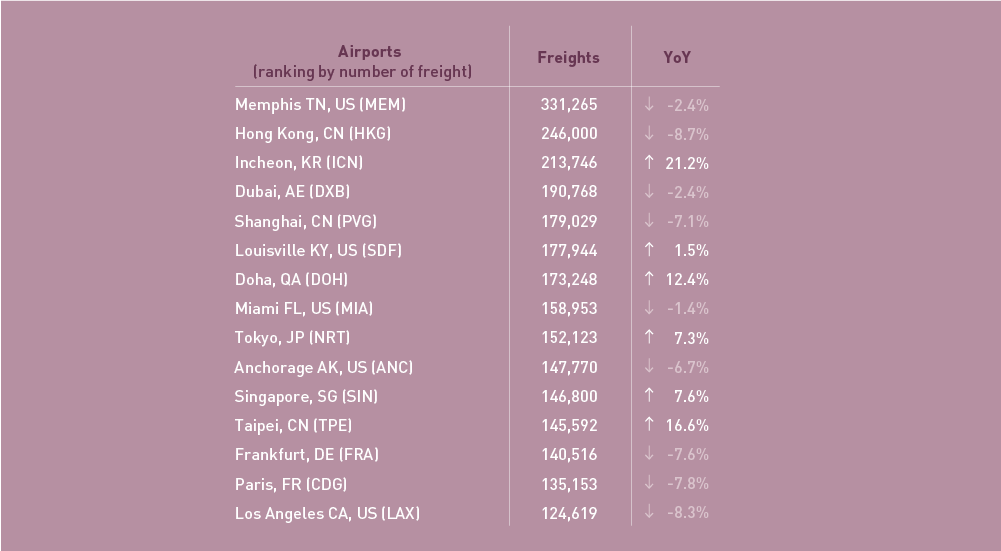 In terms of freight, the Top 15 airports reported a growth of +0.1% YoY. Similar to passenger traffic, Shanghai and Beijing did not appear in Top 15. Hong Kong recorded the most significant fall by -8.7%. Incheon, Taipei and Doha posted double-digit growth, mainly owing to the comparison with the weak outcome of a year ago. 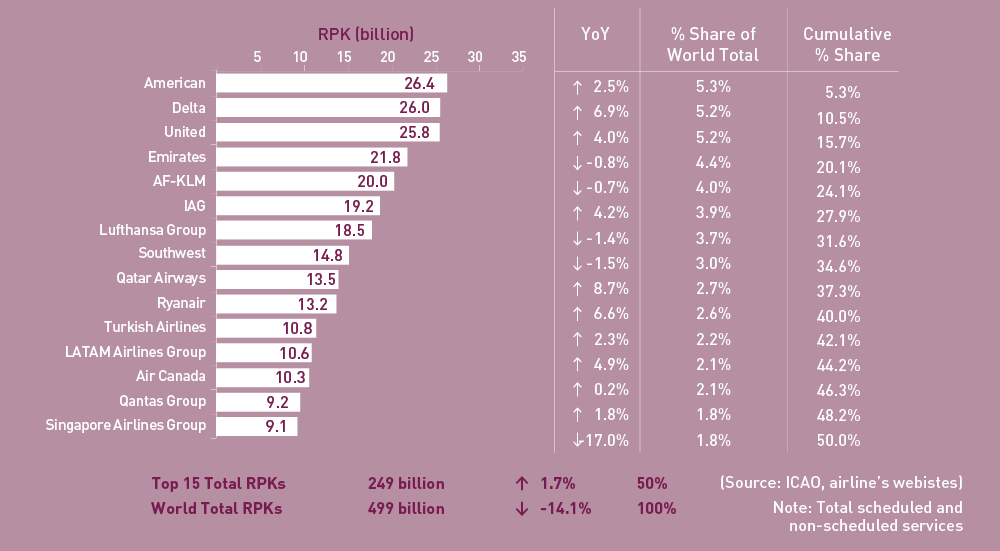 In terms of RPK, the Top 15 airline groups accounted for 50.0% of the world’s total RPK in February 2020 and grew by +1.7% YoY. This growth was +15.8 percentage points higher than the world’s average on scheduled services. Ranking of the Top 15 airlines started to show sign of distortion due to the impact of COVID-19 significantly weighed on airlines in Asia/Pacific.

American ranked 1st with a growth of +2.5%, followed by Delta and United with solid growth of +6.9% and +4.0%, respectively. Southwest declined by -1.5% albeit ranked up to 8th. Air Canada reported a marginal growth of +0.2% while securing a 13th position.

Major Asia/Pacific airlines, especially the Chinese airlines suffered dreadful demand drop due to the COVID-19 outbreak and disappeared from the Top 15 ranking. Singapore Airlines ranked 15th with a sharp decline of -17.0%. LATAM and Qantas made it to the Top 15 with a modest growth of +4.9% and +1.8%, respectively.

Worldwide capacity expansion grew by -8.7% YoY in February 2020. The decline in world capacity was mostly driven by the drastic capacity reduction in Asia/Pacific amidst the COVID-19 outbreak. All other regions remained positive with Africa being the fastest expanding region albeit at a slower pace.
Global capacity is expected to further shrink with the spread of the outbreak in other regions.