According to the latest edition of the World Airport Traffic Forecasts (WATF) released by Airports Council International (ACI) World, by the year 2040, emerging and developing economies will account for more than 60% of all passenger traffic.

Global traffic surpassed the 8.2 billion passenger mark in 2017 and the WATF projects that it is expected to double by 2034 based on a projected growth rate of 4.3% per annum. Over the long term, it is projected to grow at an annualized rate of 4.1%, reaching 20.9 billion by 2040.

Over this timeframe, China is predicted to become the largest passenger market with just under four billion passengers which will represent a 19% share of the global passenger traffic market. A number of other emerging economies are projected to rise in the rankings including Indonesia, Turkey and Vietnam. 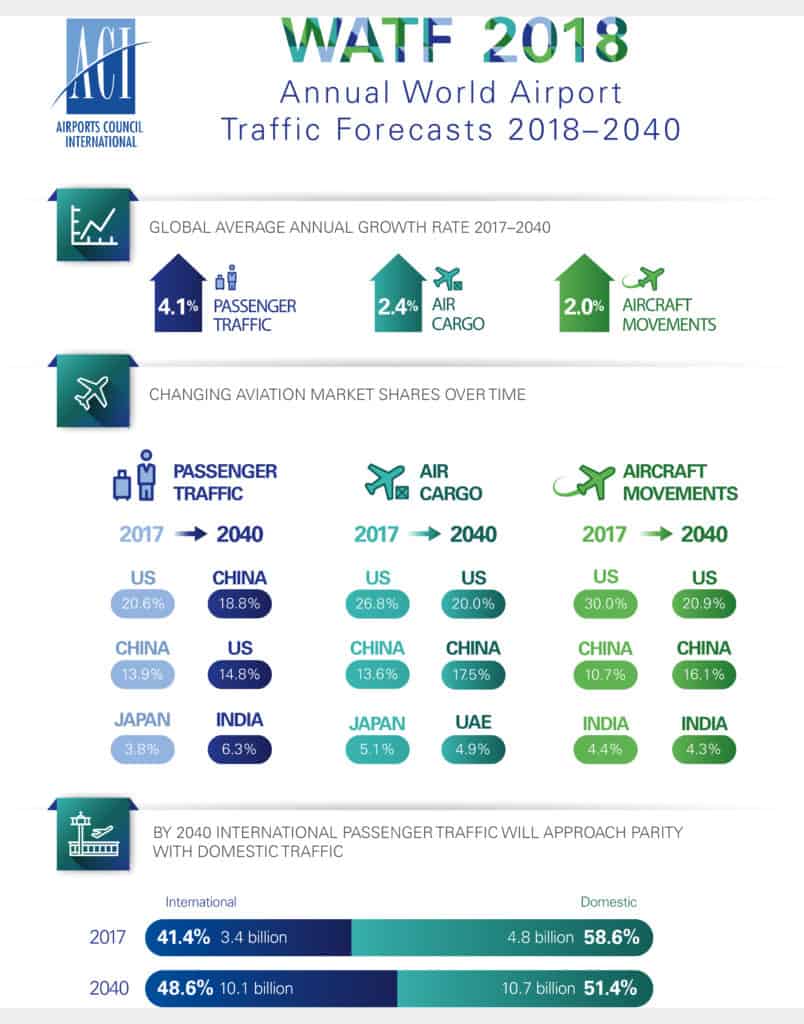 In 2040, an estimated 20% of all air cargo will be handled in the US. China and the United Arab Emirates, predicted to be the second and third largest markets, will together handle another fifth of the 203.4 million tonnes of global air cargo volumes. In the short term, however, while there was strong growth in air cargo volumes in 2017, it is unlikely that 2018 will repeat 2017’s growth rates, given the adverse headwinds in trade relations and heightened geopolitical tensions that have played out this year.

The prospects for growth in the passenger market over the short, medium and long term, remain robust and, while there are some concerns around cargo in the short term, the longer-term outlook is more positive,” said Angela Gittens, Director General of ACI World. “Passenger numbers are set to surpass 8.7 billion in 2018 and the global medium-term forecast shows almost 30% growth in passenger numbers from now until 2022. Aviation’s gravitational centre continues to shift eastward, because future growth in passenger traffic will originate from emerging markets, many of which are in the Asia-Pacific region.

“Geopolitical tensions and protectionist policies that retreat from further economic integration and air transport liberalization could also have an adverse effect on the air transport industry.

“The aviation industry must come together to respond to these challenges and help to ensure communities continue to reap the social and economic benefits of air service growth. Policy at a national and global level should be focused on facilitating sustainable growth over the long term.” 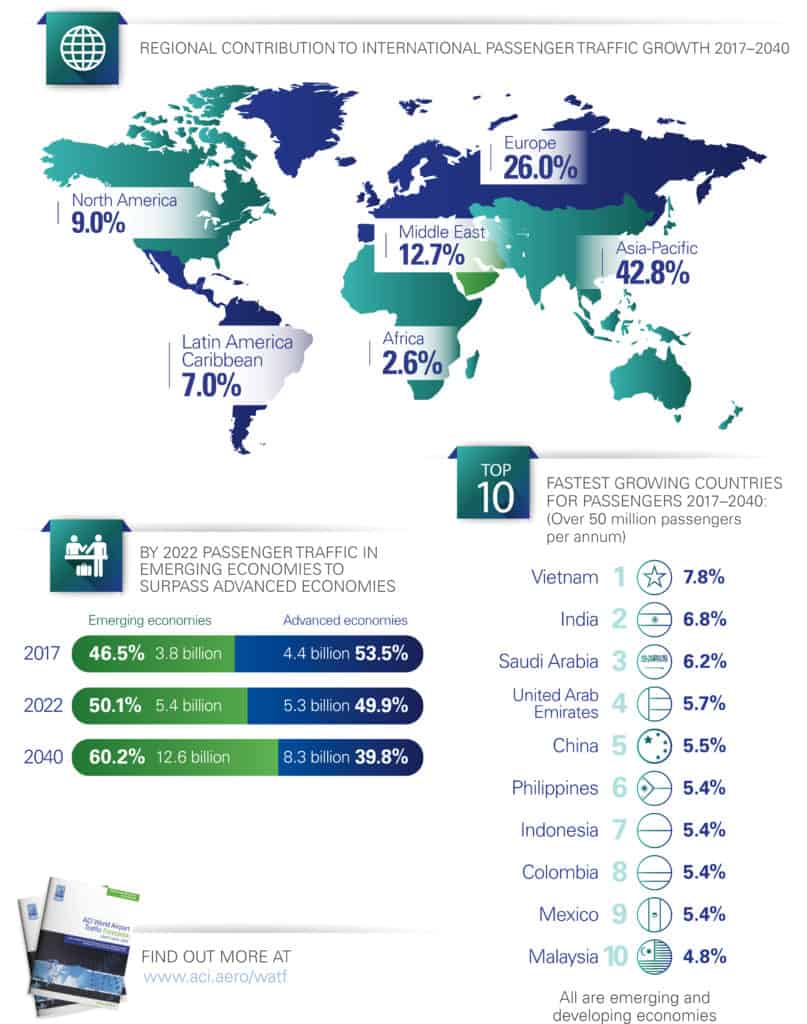 The WATF comprises traffic forecasts for more than 110 countries and presents detailed metrics which include total passengers (broken down into international and domestic traffic), total air cargo, and total aircraft movements up to 2040.

Airports Council International (ACI), the trade association of the world’s airports, was founded in 1991 with the objective of fostering cooperation among its member airports and other partners in world aviation, including the International Civil Aviation Organization, the International Air Transport Association and the Civil Air Navigation Services Organization. In representing the best interests of airports during key phases of policy development, ACI makes a significant contribution toward ensuring a global air transport system that is safe, secure, efficient and environmentally sustainable. As of January 2018, ACI serves 641 members operating 1953 airports in 176 countries.